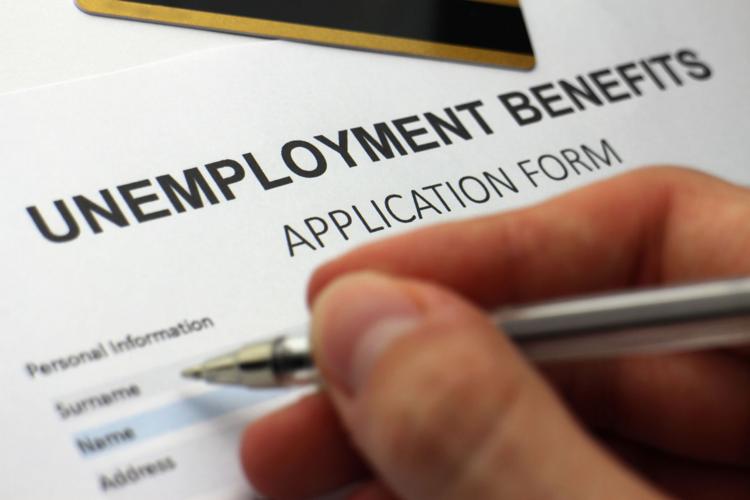 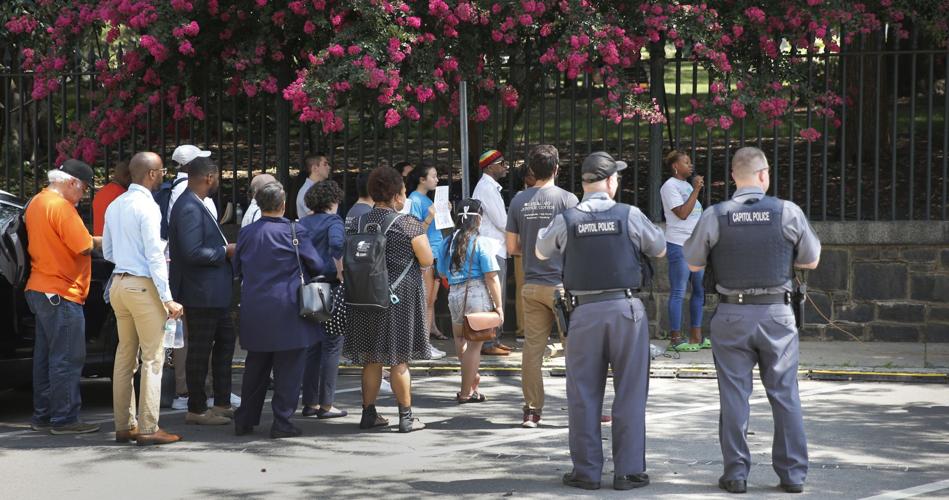 In July 2021 speakers from the Unemployment Action Coalition gathered on Bank Street in Richmond to protest what they termed inaction by the Virginia Unemployment Commission. 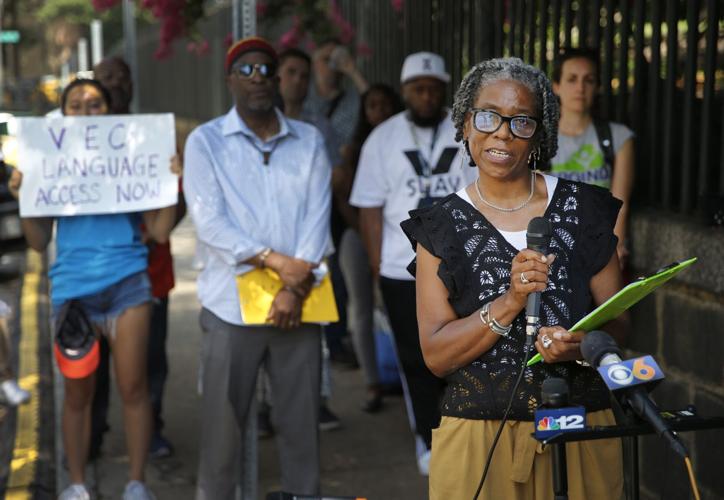 In July 2021, the Unemployment Action Coalition held a gathering on Bank Street to criticize inaction by the Virginia Employment Commission. Richmond resident Anita Johnson spoke about her difficulties receiving unemployment benefits from the state. Johnson said she had not gotten a check or an update on her claims in nine months.

Jessica Terry lost her business and her marriage during the COVID-19 pandemic. She couldn’t look for outside work because she was home in Mechanicsville taking care of four school-age children.

So Terry survived on state and federal unemployment benefits until they ran out. Now, the Virginia Employment Commission is taking legal action to collect an estimated $17,000 in payments it says she shouldn’t have received.

Terry isn’t alone. On July 1, the VEC, allied with Attorney General Jason Miyares and an outside collection agency, resumed collecting an estimated $859 million in overpayments to more than 366,000 unemployed Virginians during the pandemic.

The state is obligated under federal law to collect the money, but employment attorneys say the fault lies more with the VEC than with the people who received the benefits and have waited months for the opportunity to waive repayments under a state law that expired June 30.

Pat Levy-Lavelle, an attorney at the Legal Aid Justice Center, said, “I think there are a lot of people still out there suffering.”

His nonprofit organization and four partnering groups filed a federal lawsuit against the VEC in early 2021 to force it to comply with legal requirements for promptly processing claims, adjudicating disputes over eligibility and deciding appeals. The VEC settled the lawsuit in December after taking steps under then-Gov. Ralph Northam to address the agency’s shortcomings.

“The priority should be to make sure people get their questions answered and get the benefits to which they are entitled,” Levy-Lavelle said.

When the pandemic began 28 months ago, more than 400,000 Virginians lost their jobs in one month. They turned for help to an unemployment insurance system that was ill-prepared to handle the deluge of 2 million claims for unemployment benefits or carry out an array of new federal emergency aid programs to help people ride out the public health emergency.

The crisis focused withering attention on the VEC from the General Assembly and its legislative watchdog agency: the Joint Legislative Audit and Review Commission, which issued more than 40 recommendations, most of them adopted as state law this year to fix flaws in the system and its oversight.

Under Gov. Glenn Youngkin, the VEC has reduced many of the backlogs that clogged the system, but people still face waits in getting paid benefits, resolving disputes over eligibility and requesting that the state waive overpayments they received through no fault of their own.

“We’ve made some significant headway, but there’s a lot of work that remains to be done,” said Carrie Roth, whom Youngkin appointed as Virginia employment commissioner in January.

In an interim report released in September, JLARC warned that the VEC had made an estimated $930 million in overpayments, which then-Secretary of Labor Megan Healy challenged as “not even close.” By the time it released the final report in November, JLARC had raised the estimate to $1.2 billion.

When the VEC announced July 1 that it would resume legal action to collect the overpayments, the agency confirmed it was pursuing 366,308 cases of improper payments worth more than $859 million — out of more than $14 billion it paid in state and federal benefits during the pandemic.

Those payments were not based on fraud, which accounted for 23,907 cases, or just 6% of the payments the state is seeking to recover.

“Almost all of these incorrect payments are overpayments, which can occur because of mistakes made by VEC, the claimant, the employer, or because of fraud,” JLARC said in its report.

Wegbreit, at the Central Virginia Legal Aid Society, said the state’s focus on fraudulent claims has inadvertently put legal pressure on people who received improper payments through no fault of their own, as the VEC hastened to deliver unemployment benefits in the worst of the pandemic.

“The real problem is overpayment to innocent people,” he said.

Roth agrees the VEC needs to find the balance between protecting the system — and the employer-supported Unemployment Insurance Trust Fund — from “bad actors” and ensuring proper payments to those who have earned them.

“Our goal is to get the customer paid when he has earned the benefit,” she said. “We need to make sure it is the true Virginian or customer who is getting paid.”

Virginia isn’t one of the states that is authorized under federal law to waive repayments of ineligible benefits. However, the General Assembly provided temporary relief last year with legislation and state funding to waive repayment by people such as Jessica Terry who didn’t have the money to pay back benefits they may have received in error through no fault of their own.

“We obviously needed the money to pay the bills,” said Terry, who sought jobless benefits after the race-car “speed shop” that she ran with her then-husband went bankrupt at the beginning of the pandemic. “It’s not like I banked it and I’m sitting on it.”

The legislation applied retroactively to payments for workweeks beginning March 15, 2020, through June 27, 2021, not prospectively. The VEC system is supposed to automatically notify people who are eligible to request a waiver if their case falls within the time frame and they have had the opportunity to appeal the overpayment decision.

“You can’t go online to apply for the waiver,” Roth said. “It is a waiver that is unique to the individual.”

Del. Sally Hudson, D-Charlottesville, a member of the Commission on Unemployment Compensation and the sponsor of the waiver legislation, said she wanted to make Virginia a “waiver state” while allowing it to address the bulk of overpayment cases that had occurred early in the pandemic.

Hudson said the Senate added a sunset clause to the legislation to make it “a temporary COVID relief measure” that expired July 1.

“What is really expiring at this moment is the pause in collection of the debts,” she said.

The VEC said July 1 that it will not begin collection actions against people who are waiting on appeals or waiver requests “until all other options have been pursued.” Among the options are voluntary repayment plans, which Hudson said the agency has reached with about 57,000 people.

The agency acknowledged its information technology system previously has not allowed its staff to recognize which cases were pending appeal or a waiver request.

“We did have a backlog situation where not all of the appeals have been keyed into the system,” spokesperson Joyce Fogg said. “This issue has been resolved, and the backlog of appeals that need to be keyed into our system has been eliminated.”

Wegbreit said the agency has committed to continue accepting waiver requests for overpayments made “for weeks ending on or before June 25, 2022, regardless of when the overpayment was declared or the waiver request was offered.”

He acknowledged the law was limited to overpayments made during a 15-month period of 2020-2021, but added, “I think as a matter of equity and common sense that they should” apply it to cases incurred since then.

In Mechanicsville, Terry doesn’t know where she stands. “I’ve never seen a waiver [application] come through the mail,” she said.

Getting timely information or phone calls answered has been a big part of the problem throughout the unemployment crisis. The VEC, legislators and even a federal judge were inundated with calls for help from people who either couldn’t get benefits or were being required to repay them.

“You call the number, and you get a recording that says, ‘We are experiencing higher than normal call volumes. Please try your call on another day,’” Terry said. “You call another day, and nothing happens.”

Wegbreit, her lawyer, said he’s also in the dark about why Terry was declared ineligible. She fears she caused it inadvertently by saying she wasn’t available for work outside of her home.

“I’m at home with four kids, so I can’t leave my home to go to work,” she said. “If I could find something online, I could do it.”

But if that were the case, Wegbreit said the VEC shouldn’t have paid her for those weeks in the first place. Meanwhile, he’s not sure whether her pending appeal is about the determination of eligibility for payments or the finding that she had been overpaid.

The overpayment issue isn’t the only problem that he and other advocates see at the VEC despite some initial progress under Youngkin, a Republican political newcomer who used the agency’s problems in his successful gubernatorial campaign last year against former Gov. Terry McAuliffe, a Democrat.

In late February, five weeks into his term, Youngkin announced the VEC had reduced a backlog of 246,000 unprocessed reports from employers about employee separations by 89% and a backlog of claims awaiting adjudication for benefits by 36%.

“We have more work to do, but I want Virginians to know we are serious about making the VEC, along with all other state agencies, work for them,” the governor said then.

Roth said Friday that the VEC has reduced the appeals backlog from 86,000 to 70,000. She said part of the problem has been that people have clogged the system by filing appeals prematurely before their cases have been decided. The agency also is reviewing a backlog of 70,000 potentially fraudulent unpaid claims.

However, Wegbreit and other employment advocates cite recent U.S. Department of Labor statistics that show Virginia 50th out of 51 states and territories, ahead of only the Virgin Islands, in making first payments within 21 days at 20.5%, compared with a DOL standard of 87%.

They said the VEC also ranks 50th, ahead of only Alabama, in meeting the DOL standard of action on first-level appeals within 30 days. The average duration of pending appeals in Virginia is 310.1 days, he said.

Wegbreit said he has one client who filed a claim in November 2020 and is waiting to have it heard. One reason, he said, is that the VEC is processing newer claims before acting on old ones.

Advocates say the agency also continues to struggle with staffing, training and the long-delayed transition of its IT system to make it easier for people to file and follow their cases online.

Hudson said, “A lot of time has passed, but not much has changed.”

VEC improves response to jobless crisis, but many still wait for help

The Virginia Employment Commission has agreed to pay $200,000 to three legal aid organizations to settle a federal lawsuit filed almost a year…

Gov. Glenn Youngkin is touting major progress in reducing the backlog in initial unemployment claims awaiting processing and payment at the be…

In July 2021 speakers from the Unemployment Action Coalition gathered on Bank Street in Richmond to protest what they termed inaction by the Virginia Unemployment Commission.

In July 2021, the Unemployment Action Coalition held a gathering on Bank Street to criticize inaction by the Virginia Employment Commission. Richmond resident Anita Johnson spoke about her difficulties receiving unemployment benefits from the state. Johnson said she had not gotten a check or an update on her claims in nine months.