Bon Secours Mercy Health is playing defense after a national news story alleged that the Catholic-based nonprofit organization has profited handsomely from a federal program to lower drug prices for poor patients, while cutting medical services at a hospital it owns in Richmond’s impoverished East End.

The New York Times story, “How a Hospital Chain Used a Poor Neighborhood to Turn Profits,” detailed the health system’s lack of investment at Richmond Community Hospital — which a group of Black doctors founded and Bon Secours bought in 1995 — despite the profits it earned from a federal program that allows hospitals in poor communities to buy drugs at substantially lower prices than they charge insurers.

The story, published Saturday, prompted two Virginia congressional representatives to vow to push for stronger federal oversight of the drug pricing program — to prevent health systems from gaming the system and in order to require drug manufacturers to honor discounts to low-income hospitals and health centers.

“The program ... was not meant to do what they’re doing with it,” Rep. Don McEachin, D-4th, said in an interview on Monday. “We’re currently looking for a legislative solution.”

McEachin said he has spoken to doctors who are outraged at allegations that Bon Secours has eliminated basic medical services — including an intensive care unit — at Richmond Community and failed to provide basic care, such as catheterization of a man suffering a heart attack.

“This is horrible,” said the congressman, who represents the community surrounding the hospital in the East End. “It’s a horrible way to treat poor people.”

The story also alleged that Bon Secours had not honored the commitments it made a decade ago to improve Richmond Community as part of a $40 million deal to sponsor a training camp for the professional football team now known as the Washington Commanders.

The deal allowed the nonprofit company to buy a valuable former Richmond public school property in the West End that it ultimately developed as a mixed-use community instead of a nursing school as it initially had promised.

A spokesperson for Rep. Abigail Spanberger, D-7th, said Monday that she was “deeply troubled” by the Times story and added that she “will always support additional oversight of federal programs and tax benefits to ensure not-for-profits are meeting commitments to the communities they serve.”

But Spanberger, whose current district includes parts of Henrico and Chesterfield counties that include Bon Secours hospitals, defended the 30-year-old federal drug pricing program — known as 340B — as “critical for lowering drug costs for Virginians living in rural and under-served areas who are served by community health centers and rural hospitals,” her spokesperson said. “The program costs the American taxpayer $0.”

Bon Secours pushed back at allegations that it had acted against its historic mission of providing health care to the most vulnerable.

“To suggest that we don’t operate in full support of our important mission is without merit and we take issue with such baseless allegations,” the company said in a statement.

The health system, which merged with Ohio-based Mercy Health in 2018, said it is addressing the health disparities that disproportionately affect poor people, through mobile health clinics for the uninsured, transportation services in the East End, forensic nursing for victims of violence and abuse, access to fresh food, and help with “economic equity” and career development.

“We are proud to provide access to quality care in the Richmond community,” it said.

The health system also detailed millions of dollars of investments it said it has made since the merger in community initiatives, including $8 million in the East End. It said it has invested almost $10 million in Richmond Community, while committing an additional $21 million for a new adult behavioral health partial hospitalization program and other services there.

But Bon Secours is facing criticism from a local business leader for its cutback in medical services at Richmond Community and its long delay in building a promised 25,000-square-foot medical facility next to the hospital.

“The fundamental issue is that poor people in Church Hill are getting screwed,” said Steve Markel, an executive for the Markel Corp., a financial holding company.

The hospital no longer employs gastrointestinal doctors or nephrologists — who focus on kidneys — and it can no longer complete some cardiac procedures.

“It’s not really serving the community,” Markel said of the health system.

Last year, he publicly criticized Bon Secours for being slow to fulfill its side of the agreement it made with the city of Richmond in 2012 as part of the football training camp deal. In 2013, Bon Secours acquired a valuable plot of land at the site of the Westhampton School in the city’s affluent West End that it has turned into a high-end residential community.

As part of the deal, the company pledged to build the medical facility next to Richmond Community on Nine Mile Road and create full-time jobs there, but construction began in February, nine years later.

Markel said Bon Secours is not alone in misusing the 340B program, which requires pharmaceutical companies to give discounts to safety-net hospitals and health centers in exchange for the federal-state Medicaid program agreeing to cover their drugs.

“It’s a widespread problem,” he said. “Bon Secours is taking advantage of the circumstances, and a lot of other people are doing the same thing.”

Health insurance companies pay more for drugs than the hospitals pay for them under the program, said Doug Gray, president of the Virginia Association of Health Plans. “The amount they pay for the drugs and the amount they pay to health plans creates a huge pool of money.”

The Times story alleges that Bon Secours used Richmond Community to create a number of affiliated pharmacies and health providers in more affluent parts of the region to sell discounted drugs at a higher price, while not investing the profits in the East End hospital or communities it serves.

Gray said the state provides little oversight of hospitals and the services they provide, other than licensing and, for some services, a certificate of public need to operate.

“I don’t think there is any state oversight,” he said.

The Virginia Department of Health oversees the licensing of general hospitals and outpatient surgical hospitals to provide health care services. It also certifies hospitals for federal reimbursement under the Medicare and Medicaid programs, and requires inspection every two years.

Del. Mark Sickles, D-Fairfax, said the allegations against Bon Secours have little to do with state law or regulation.

“The big scandal here is the milking of the federal program. ... It is not our program that they’re scamming,” Sickles said.

News you may have missed over the weekend about a rally on Capitol grounds for transgender student rights; childhood obesity in Petersburg and…

Our series: Childhood obesity in Virginia

The Times-Dispatch is covering the ongoing crisis of childhood obesity in Virginia and beyond. Become a member today at richmond.com/members.

Prices at Richmond-area hospitals can be hard to decipher

The price of a CT scan appears to vary widely based on hospital-produced lists. But reading and understanding pricing lists is a challenge.

The former Phillip Morris tobacco building will become a clinic for uninsured patients, scheduled to open in January.

Bon Secours bought deeply discounted drugs meant for low-income patients at Richmond Community and dispensed them at facilities throughout the area.

'This community has been neglected': the downsizing of Richmond Community Hospital

In 2017, Richmond Community lost its ICU. Then the lone GI doctor left and was never replaced. Now the hospital's capabilities are limited.

This Day in History: The Washington Monument is completed

The Bordeaux region, in crisis, calls for help to pull out vines

The Bordeaux region, in crisis, calls for help to pull out vines

Shocking royal family interviews that changed the course of ‘The Firm’

Shocking royal family interviews that changed the course of ‘The Firm’ 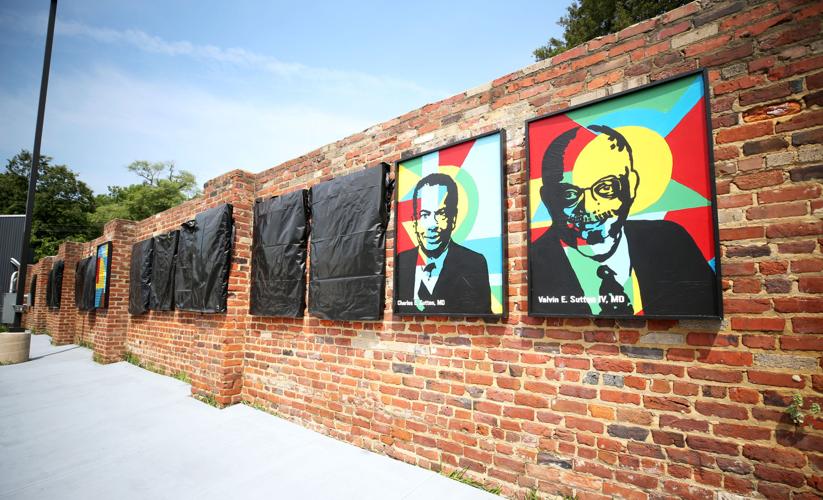 In this 2018 image, two of the 21 depictions of African American physicians are seen on a wall at Bon Secours Richmond Health System’s Sarah Garland Jones Center. The 21 doctors, along with Jones, founded what would become Richmond Community Hospital in the city’s East End.