Virginia's population grew by 7.9 percent in the last decade. The bulk of the growth was focused in the northern part of the state, while 62 of 133 localities -- largely in Southwest and Southside Virginia -- lost residents. 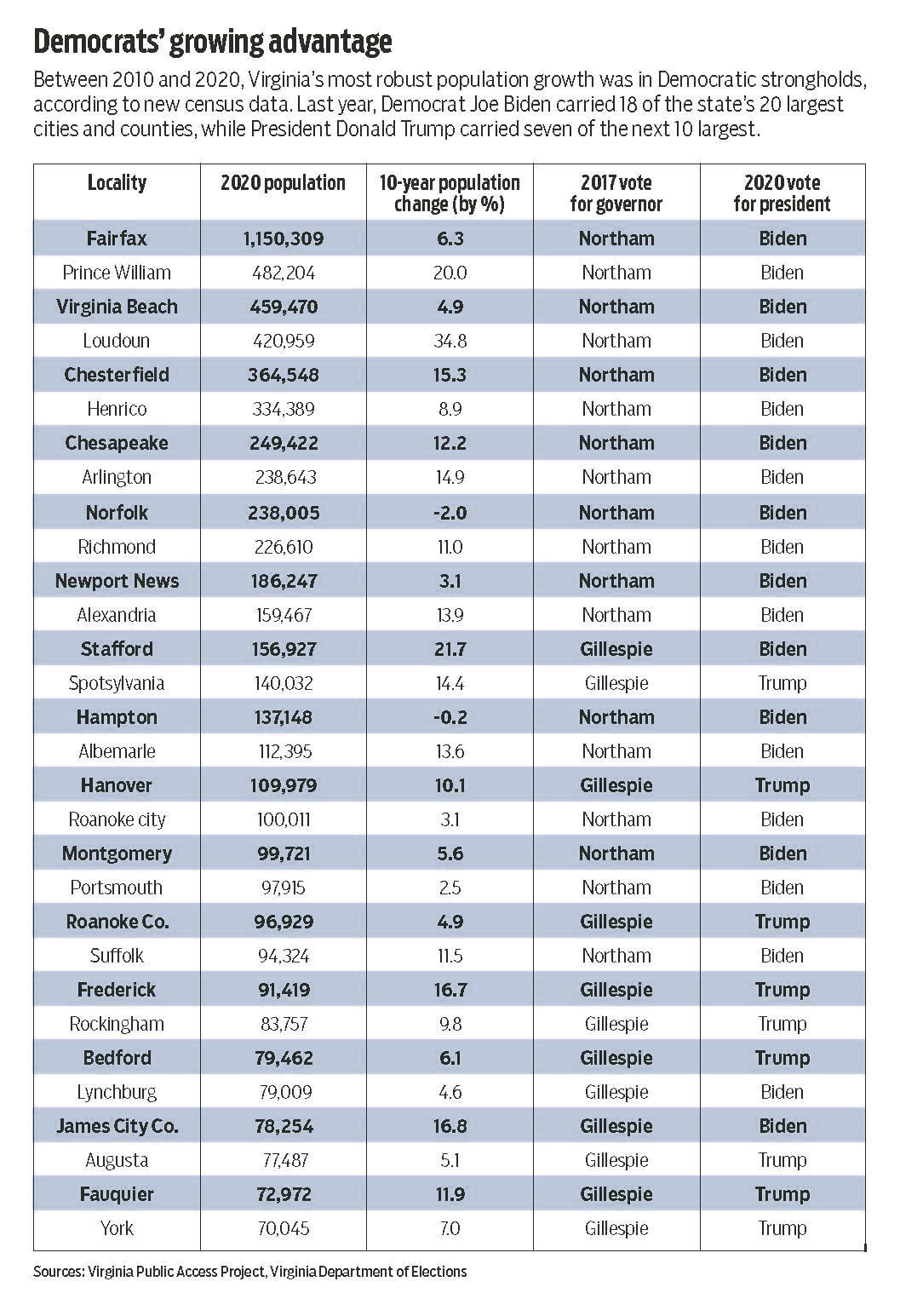 Democrats’ winning streak in Virginia’s statewide elections since 2009 is most attributable to the state’s 10 largest counties and cities, but new census figures underscore that the trend goes deeper, to the next population tier.

Republicans’ first significant base of support is in the state’s third population tier, the 10 localities with populations between 70,000 and 97,000. But even there, some cracks are starting to show.

“Virginia just seems to capture a lot of things that are writ large about the United States,” said Jennifer Erkulwater, professor and chair of the Department of Political Science at the University of Richmond.

As with the nation, Virginia’s population growth is mostly in large cities, suburban counties and exurbs. The state is becoming more diverse, particularly in its larger localities, boosting Democrats.

Meantime, politics is becoming more nationalized and polarized, said Erkulwater, noting that showdowns before school boards have become proxy battles for a national debate over whether to require masks in schools.

Virginia’s population shifts, with growth in Democratic bastions and dozens of rural red counties declining in population, will have key ramifications as the state prepares to elect a new governor and a new commission redraws the state’s legislative and congressional districts.

Turnout is also a key variable in Virginia’s elections. It ordinarily drops by at least 25 percentage points the year after a presidential election, auguring closer contests for statewide offices.

Biden swept Virginia’s 10 largest localities, as Democrat Ralph Northam had in his run for governor in 2017. Both carried the big Northern Virginia counties of Fairfax, Prince William, Loudoun and Arlington; the city of Richmond and neighboring Chesterfield and Henrico counties; and the three largest cities in Hampton Roads — Virginia Beach, Chesapeake and Norfolk.

In 2009, Republican Bob McDonnell edged Democrat Creigh Deeds in Fairfax by about 4,500 votes as he led a GOP sweep for governor, lieutenant governor and attorney general. Republicans have not won a statewide contest since then. In 2017, Northam beat Republican Ed Gillespie in Fairfax by 138,000 votes.

New census figures show some of the state’s largest localities are far outpacing the state’s growth rate of 7.9% from 2010 to 2020, while growing more diverse.

Loudoun County, which Republicans last carried statewide in Gillespie’s 2014 challenge to Sen. Mark Warner, D-Va., grew 34.8% to nearly 421,000 residents. Loudoun’s mere growth of 108,648 people between 2010 and 2020 nearly matches the entire population of Hanover County, the second-largest Virginia locality to back Trump in 2020.

Fairfax, a county of 1.15 million people, is now a minority-majority enclave. Its population is 20.4% Asian. That means there are more Asian residents in Fairfax than all of the 226,000 residents in Richmond.

Demographic change continues to fuel political change in suburban Richmond as well. GOP margins in Chesterfield County have given way as the county has grown in population and become more diverse. Chesterfield’s African American population is now nearly 23%. Its Hispanic population rose from 7.2% in 2010 to 11% in 2020.

In a sign of things to come, in 2017 Northam became the first Democrat to carry Chesterfield for governor since Albertis Harrison in 1961.

“The Republican Party has lost the minority vote nationally, not just in Virginia,” said David Ramadan, who served as a Republican delegate representing parts of Loudoun and Prince William counties from 2012 to 2016.

Ramadan, now an adjunct professor at the Schar School of Policy and Government at George Mason University, suspended his membership in the GOP when the party nominated Donald Trump in 2016. Ramadan now says he is an independent, but he still speaks fondly of President Ronald Reagan.

On Twitter, Ramadan has pinned a video of Reagan’s final speech in the White House in January 1989 in which Reagan extolled immigrants as “the great life force of each generation of new Americans.”

Ramadan, who was born in Beirut, says that in the 1990s, Republicans’ message appealed to many immigrants who agreed on issues of small government and family values, as well as the importance of entrepreneurship.

In the Trump era, he said, perceived hostility to immigrant populations has turned voters away. Ramadan said he often thinks of an adage from Republican Dick Armey, a former U.S. House majority leader from Texas: “You can’t call the girl ugly all year long, then invite her to the prom and expect her to go.”

The Republicans’ path forward is to embrace and welcome Virginia’s diversity, the former delegate said.

“If you cannot put out a statement for my mother wishing her a happy Ramadan, or a happy Eid,” marking the end of the month’s fasting, “you’re not going to get her vote,” he said.

Democrats’ dominance in statewide elections extends to Virginia’s second population tier, the 10 localities with populations between 186,247 (Newport News) and 97,915 (Portsmouth).

While fewer of the Democratic bastions in this group show surging population growth, diversity is sowing political change here as well.

Like its larger brethren in Northern Virginia, Stafford — about 40 miles from Washington and 60 miles from Richmond — is undergoing rapid change. For example, the county’s Hispanic population rose from 9.2% in 2010 to 15.1% in 2020.

“Trump was poisonous in the suburbs and the definition of suburbs is expanding,” said Stephen Farnsworth, a political science professor at the University of Mary Washington.

More than half of Virginia’s residents were born outside of the state. As Northern Virginia’s population becomes more dense, Stafford is seeing “a second wave of suburbanization” as more immigrants and Washington commuters originally from other states are moving to Stafford, seeking affordable housing and transportation options close to Interstate 95 and the Virginia Railway Express, he said.

Traditional GOP messaging on social issues might not resonate with new residents “who aren’t necessarily culturally Virginians” as well as a “small-government, economic message,” he said.

In the urban crescent that stretches from Northern Virginia through greater Richmond to Hampton Roads, the ability to telecommute during and beyond the pandemic also might make it easier for residents to move in search of affordable housing and convenience.

Republicans continue to hold a solid base of support in a string of sizable counties outside the urban crescent.

But here, too, there are hints of change.

In 2017, Lynchburg and James City County backed Gillespie for governor. Last year, Biden became the first Democratic presidential candidate to carry Lynchburg since President Harry Truman in 1948 and the first to carry James City since Vice President Hubert Humphrey in 1968.

Virginia's population grew by 7.9 percent in the last decade. The bulk of the growth was focused in the northern part of the state, while 62 of 133 localities -- largely in Southwest and Southside Virginia -- lost residents.