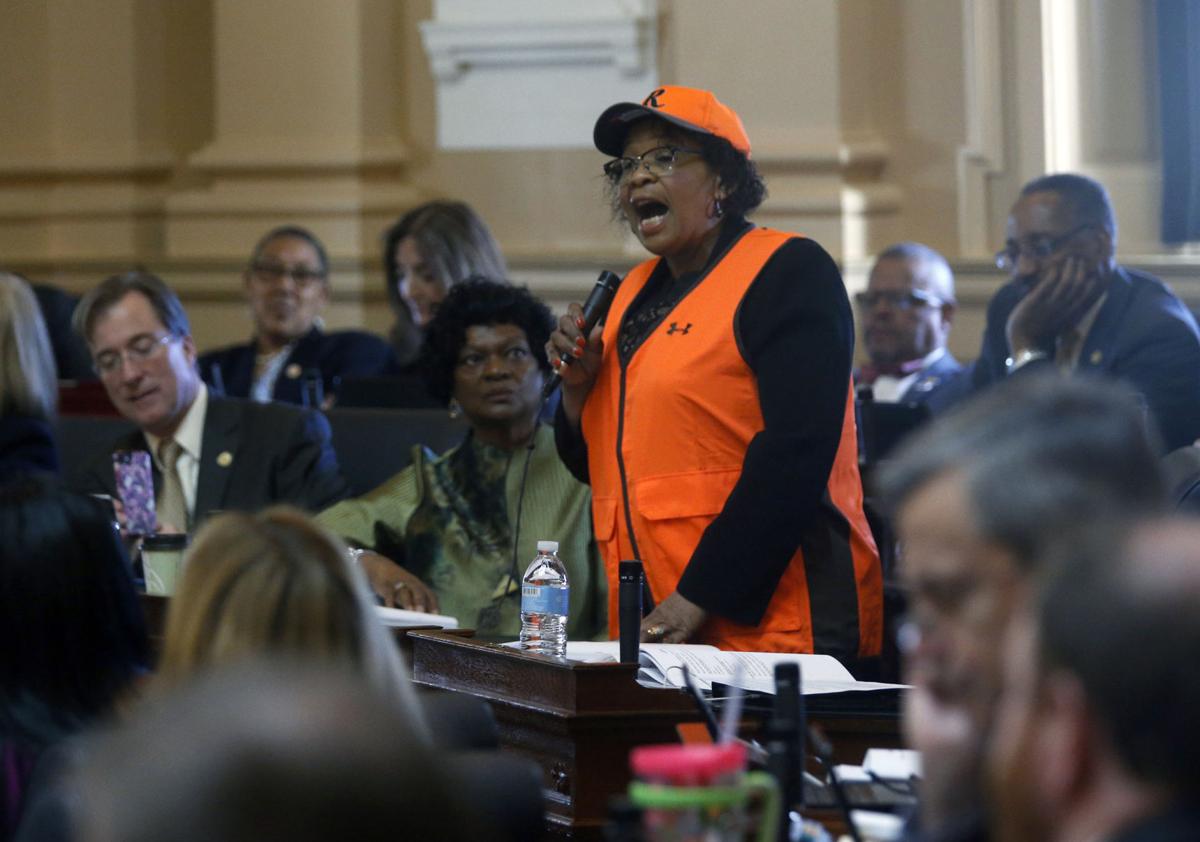 Del. Roslyn Tyler, D-Sussex, spoke against a bill sponsored by then-House Speaker Bill Howell, R-Stafford, dealing with a fine for hunting dogs wandering on landowners’ property. The bill failed. Tyler, who lost her seat on Nov. 2, represented a large rural district along the North Carolina line south of Richmond. 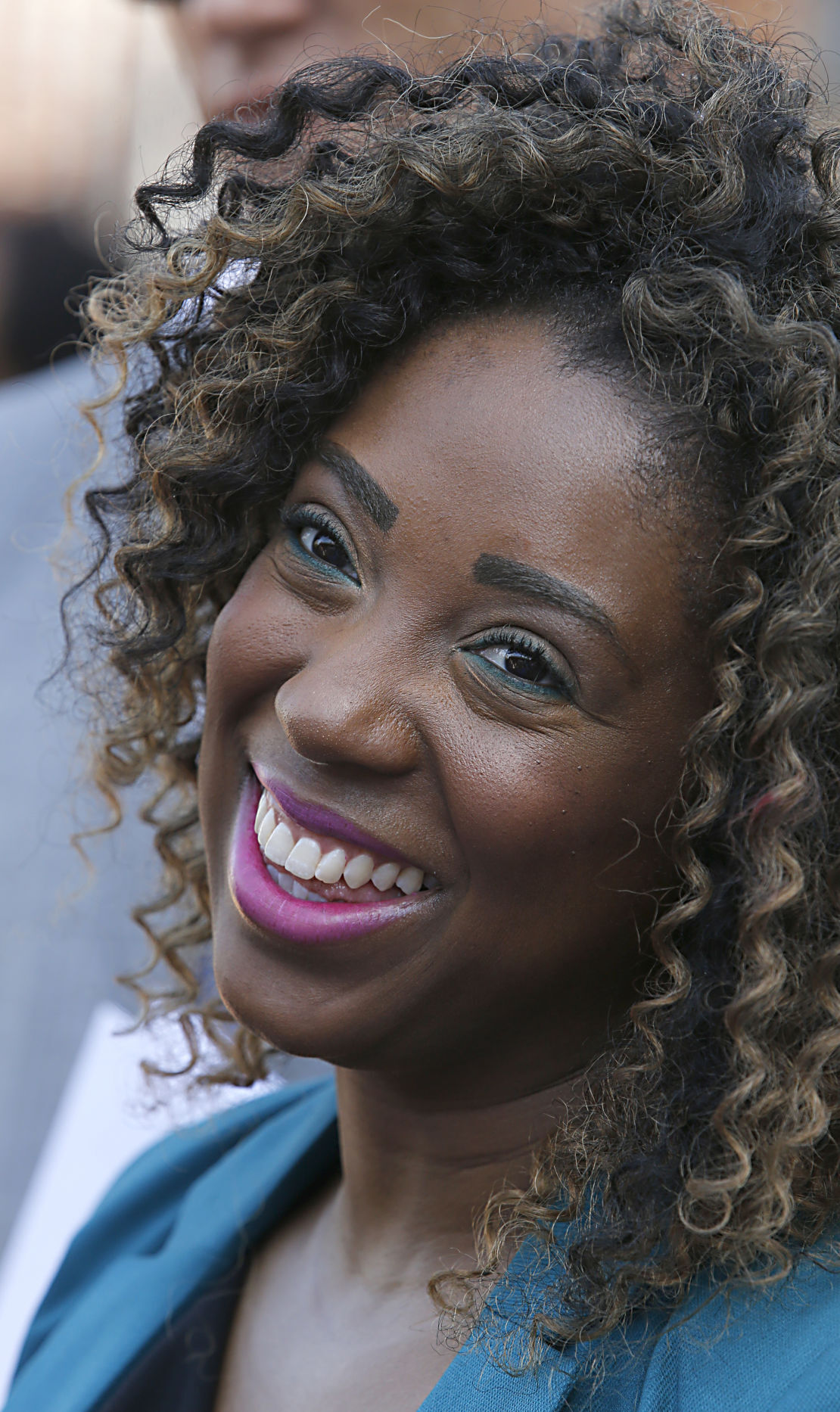 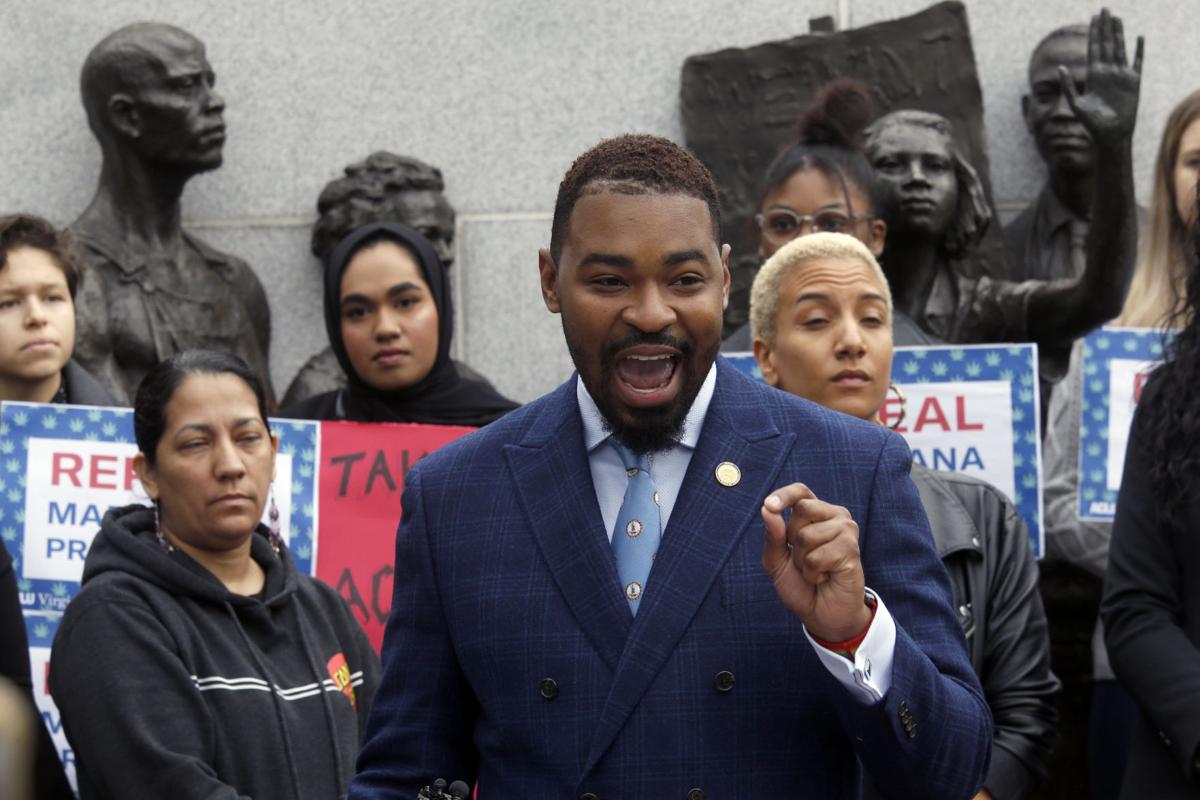 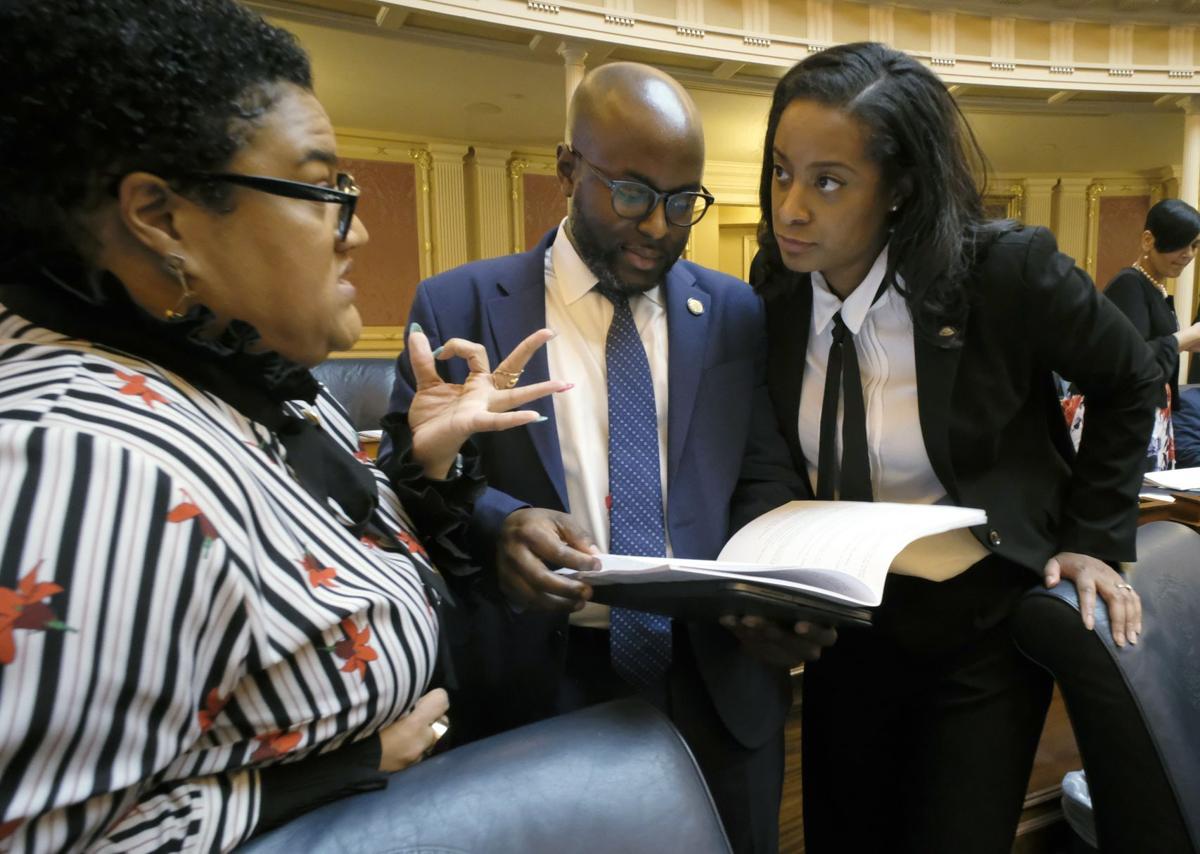 Del. Cia Price (from left), D-Newport News; Del. Alex Askew, D-Virginia Beach; and Del. Jennifer Carroll Foy, D-Prince William, conferred at the state Capitol. Askew, first elected in 2019, lost his seat on Nov. 2 but has asked for a recount. Carroll Foy stepped down from the House in 2020 to focus on her run for governor and was succeeded by Candi King.

Democrats’ stunning election defeat on Nov. 2 swept up four House members of the Virginia Legislative Black Caucus, including the only two representing districts that include large rural areas.

The four Black lawmakers were among the seven Democratic incumbents beaten by Republican challengers, as Virginia’s voters flipped control of the House of Delegates to the GOP. Another member of the caucus, Del. Hala Ayala, D-Prince William, did not run for re-election and instead ran unsuccessfully for lieutenant governor.

Members of the Legislative Black Caucus said the losses of Dels. Lashrecse Aird, D-Petersburg; Alex Askew, D-Virginia Beach; Josh Cole, D-Fredericksburg; and Roslyn Tyler, D-Sussex, will create a void of institutional knowledge, and could result in an overall loss of membership of one to two members, depending on the outcome of two pending recounts in Hampton Roads, even as Virginia’s Black population is growing.

The Virginia Legislative Black Caucus has 23 members in 2021.

Beyond the defeats, the House will welcome four new Black voices: Briana Sewell, who succeeds Ayala in Prince William; Nadarius Clark, who upended Del. Steve Heretick, D-Portsmouth, in a primary, then won the general election; Michelle Maldonado, who beat Del. Lee Carter, D-Manassas, in a primary, then won on Nov. 2; and A.C. Cordoza, who edged Del. Martha Mugler, D-Hampton — pending a recount — and would become the only Black Republican in the chamber.

“I really don’t like to think of the membership as net gains or net losses,” said Del. Lamont Bagby, D-Henrico, and chair of the caucus. “I won’t even attempt to count the contributions of these four outgoing members. When you think back to our accomplishments the last two to four years, there’s no way this work would have happened in such a trying time without the [VLBC],” he said.

The most senior member to lose her seat was Tyler, who most recently chaired the House education committee and had served as a delegate since 2006.

Aird lost her bid for a fourth term. Cole, 31, who lost his bid for a second term, was the youngest Black member in the House. Askew, first elected in 2019, trails Republican Karen Greenhalgh by 127 votes and has requested a recount. Cordoza leads Mugler by 94 votes.

“When you think about me, the only Black LGBTQ member, that voice is gone now. Lashrecse, who has the perspective of a young Black mother ... that one hurt me, more than my own defeat.

Tyler, a previous chair of the Virginia Legislative Black Caucus and a physical therapist at a hospital, represents a large rural district along the North Carolina line south of Richmond. It includes Southampton and Sussex counties, parts of Brunswick, Greensville and Lunenburg counties and the cities of Emporia and Franklin.

She said this year provided a challenging environment for re-election.

Salaries for people in the 75th District are not high, she said, and people commute to Richmond, Petersburg or Hampton Roads for better jobs. The district has five state prisons and a private prison. Losing minority representation in the four districts where Black lawmakers lost will have an impact, she said. She said she knows the Black caucus will continue to champion the right issues.

“We have a large community that needs to be heard when it comes to education equity, as far as funding, and as far as criminal justice reform in our communities,” she said. “I know that they’re going to continue to address those issues.”

Her district gained Republican voters in a court-ordered redistricting in 2018, she said, and the national mood isn’t good for Democrats. But she said there was another difference this time: increased racial animosity toward people of color.

Tyler said that national trend seemed pronounced in her district. In the past 16 years, she said, she’s received racist voicemails, but nothing like the one a white man left at her office in September saying Republicans would win the election and undo the Juneteenth holiday.

“You think it’s something to celebrate the fact that your asses were our property? Forever remind people that the white man owned you like a horse?” the man said in an angry tone in the voicemail. “So you push your CRT ... and we’ll sell shirts too to remind people next year on slave day that we owned you. How do you like that?”

He continued: “You can’t drop your [expletive] race problem. So we got to get rid of you. And vote you out.”

Tyler was so disturbed by the voicemail that she shared it with police agencies.

She significantly outspent her challenger, Otto Wachsmann, in a rematch of their 2019 contest and advertised on broadcast TV for the first time, but still lost.

Cole said he similarly feels Black incumbents in particular were targeted by Republicans’ organized effort to take over the House, including claims that they wanted to “defund the police” even though Democrats had secured raises for law enforcement.

Cole, who during his race denied supporting cuts to police budgets, lost to Republican Tara Durant, who ran a campaign focused on supporting law enforcement. Durant said she was prompted to run by the protests against police brutality last summer, when she says her car was “surrounded by an angry mob,” and police didn’t intervene.

Still, Cole said Democrats’ main challenges were a national environment that wasn’t favorable to Democrats. He cited the party’s struggles in Washington, which included months of wrangling over infrastructure and a measure to boost spending on social programs and combating climate change. He also cited a failure by his party to get out the message to voters on what Virginia Democrats had accomplished during their time in the majority.

Cole, a Baptist pastor, said he tried to focused his campaign on the state’s economic recovery, lowering the cost of health care and protecting abortion access. He flipped the seat for Democrats on his second try in 2019, capturing a district that retired House Speaker Bill Howell, R-Stafford, represented for nearly three decades before Republican Bob Thomas edged Cole in 2017.

“Democrats didn’t do everything they could to make sure people know the great work we did,” said Cole, listing raises to the minimum wage, a free community college program, and a bill to protect against voter discrimination.

“The top of the ticket was an anti-Donald Trump campaign.”

Aird voiced similar concerns. The outgoing lawmaker said she’s considering running for chair of the Democratic Party of Virginia, hoping to make changes to how the party operates internally and how it communicates with voters. She said she will make a decision by the end of the year.

After Gov. Ralph Northam’s blackface yearbook scandal in 2019, so many people thought the next governor could be a Black woman, she said. Two ran in the Democratic gubernatorial primary — Sen. Jennifer McClellan, D-Richmond, and former Del. Jennifer Carroll Foy, D-Prince William. Lt. Gov. Justin Fairfax was a third Black candidate in the contest.

They were knocked out by former Gov. Terry McAuliffe, who then fell flat in the general election.

“There is still significant distaste in the mouths of many people — not just Black Virginians — about how some of that played out,” Aird said. “And as a party we still need to reckon with that, too.”

Aird, first elected in 2015, represents Petersburg but also rural Dinwiddie County, along with a swath of Chesterfield County. Like Tyler, she significantly outspent her GOP opponent, Kim Taylor, but lost in a close race.

Aird said the membership number for the Virginia Legislative Black Caucus was already below parity with the full state population before the four incumbents lost.

“Black Americans are still underrepresented in our statehouse, and we have to continue to be just as vigilant about maintaining the progress that we’re making by specifically the number of representatives that we have until parity is achieved,” she said.

She noted that a vulnerable Black population from south of the James River to the North Carolina line will have no Black representation in the House of Delegates starting next year.

Del. Don Scott Jr., D-Portsmouth, said the caucus would continue its work, but said it still “has a ways to go to make sure we maintain institutional knowledge within our organization.” Despite the incumbents’ defeats, Scott said Democrats are still running in districts drafted by Republicans with some court-ordered corrections in 2018 for racial gerrymandering.

The Supreme Court of Virginia is now redrawing the state’s legislative and congressional districts, after a newly created, bipartisan redistricting commission failed to come up with maps. The court is made up of a majority of judges chosen by GOP leaders.

“That’s why no African American lawmakers in the House voted for the redistricting amendment in the last session,” Scott said.

Bagby said the impacts of the GOP’s racial gerrymandering after the 2010 census can’t be understated, even with corrections by the courts. “As we look to get fairer maps, I’m thinking of those individuals that we lost; I’m anxious to see about getting them back.”

Cole said he would wait on the redistricting process to unfold to decide on his next steps.

These gorgeous blue sunsets are very unique to Mars

These gorgeous blue sunsets are very unique to Mars

Del. Roslyn Tyler, D-Sussex, spoke against a bill sponsored by then-House Speaker Bill Howell, R-Stafford, dealing with a fine for hunting dogs wandering on landowners’ property. The bill failed. Tyler, who lost her seat on Nov. 2, represented a large rural district along the North Carolina line south of Richmond.

Del. Cia Price (from left), D-Newport News; Del. Alex Askew, D-Virginia Beach; and Del. Jennifer Carroll Foy, D-Prince William, conferred at the state Capitol. Askew, first elected in 2019, lost his seat on Nov. 2 but has asked for a recount. Carroll Foy stepped down from the House in 2020 to focus on her run for governor and was succeeded by Candi King. 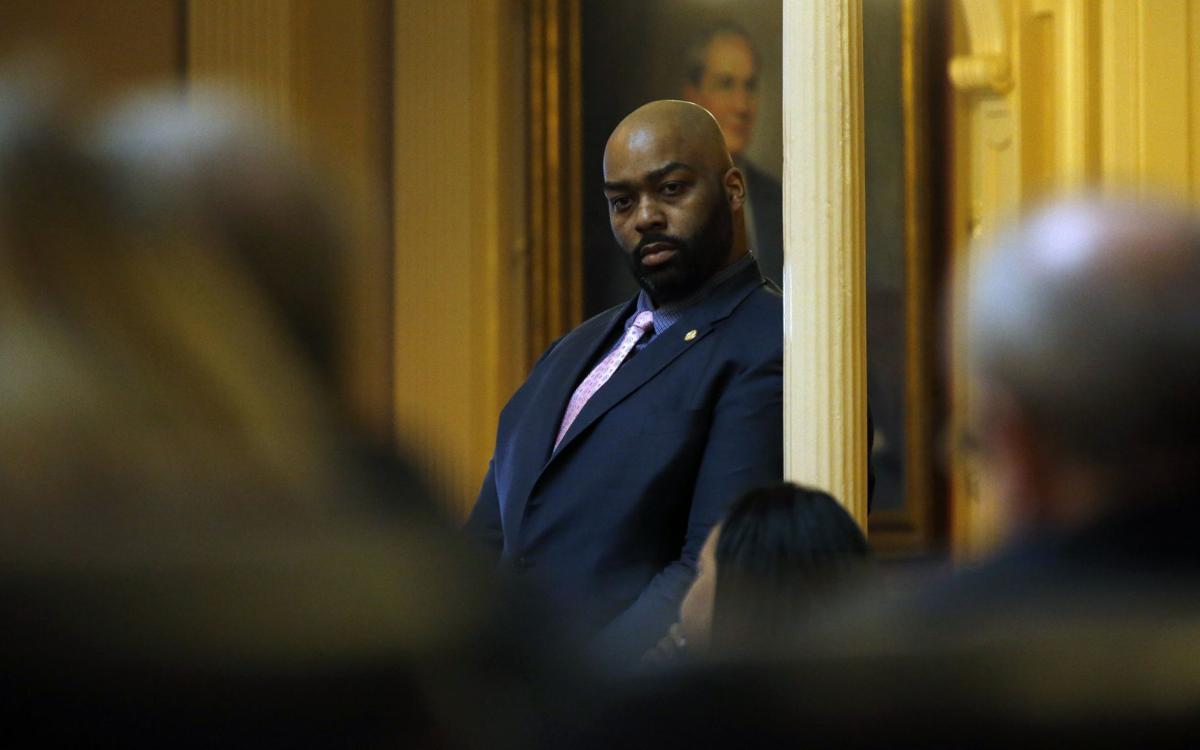