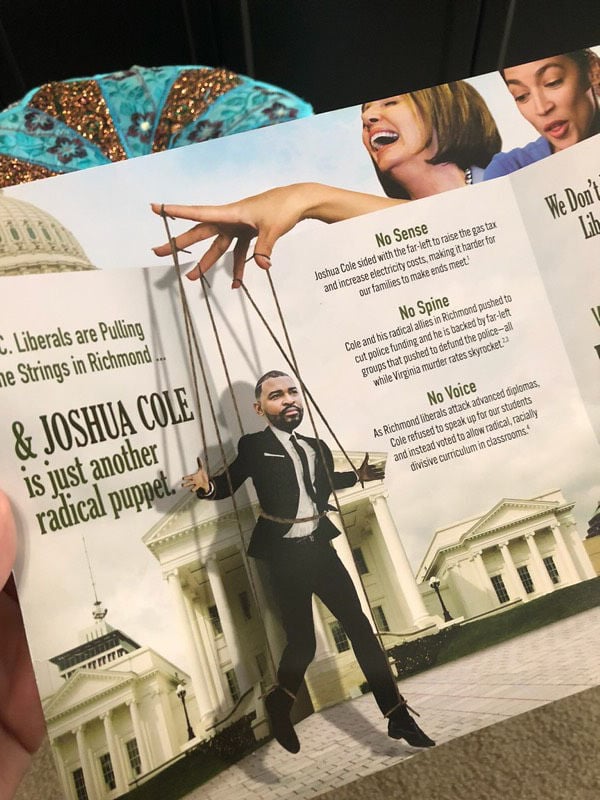 A Republican mailer depicting Del. Josh Cole as a “puppet” of Democratic leaders in Washington shows the Fredericksburg Democrat bound with ropes. 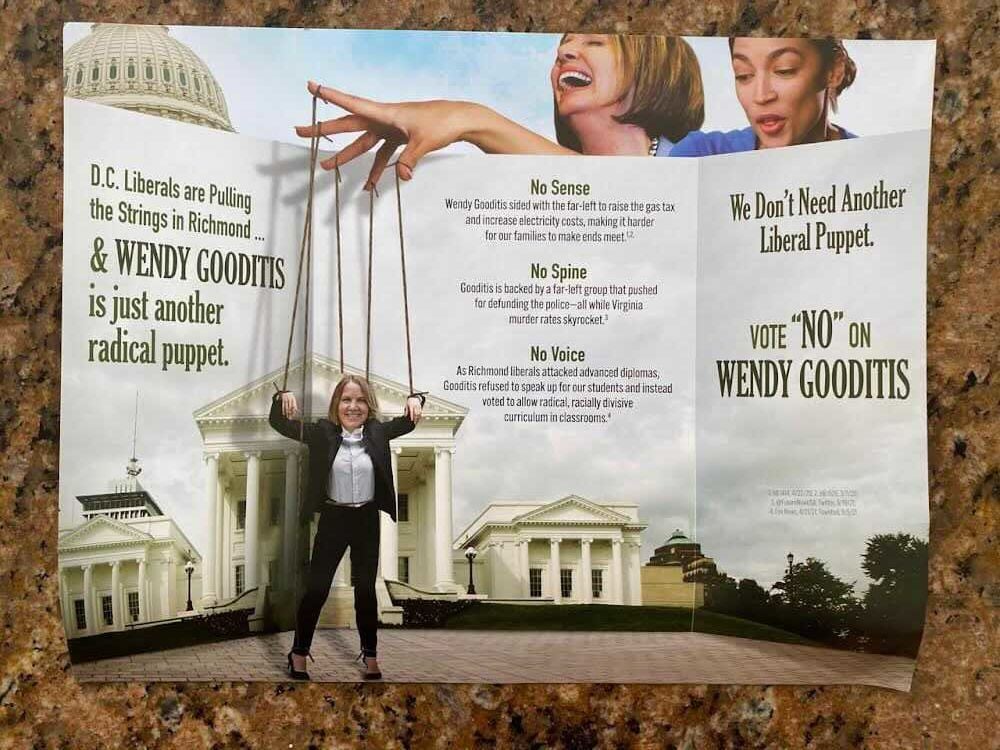 A series of eight flyers the Republican Party of Virginia mailed out in competitive House of Delegates races deride Democratic incumbents as “radical puppets” under the control of national party leaders.

The version of the flyers used to attack two Black legislators — Del. Josh Cole of Fredericksburg and Del. Alex Askew of Virginia Beach — shows the lawmakers hoisted off the ground and bound tightly around the waist, which prompted accusations of racism.

The mailers hit some district mailboxes over the weekend. Cole, who is defending his seat against Republican challenger Tara Durant, said he was struck by the flyer, describing it as a racist “dog whistle” that recalled Virginia’s dark history of lynching.

“I’m not saying that my opponent is racist, but Republicans are using racist tropes to get their voters to come out,” Cole said in an interview.

In a statement, the Republican Party of Virginia said the mailers were sent against “eight candidates of all backgrounds,” and denied racist intent in the depictions.

The fight for control of the House of Delegates this fall will come down to about a dozen competitive districts, many of which feature Democrats defending seats they flipped while President Donald Trump was in power. Democrats hold 55 seats, and Republicans hold 45.

Republicans, locked out of power at the state level in a state increasingly favorable to Democrats, are mounting a vigorous fight for both the House and the governor’s mansion.

The flyers, which feature images of House Speaker Nancy Pelosi, D-Calif., and Rep. Alexandria Ocasio-Cortez, D-N.Y., targeted eight Democratic incumbents across the state — five who are white and three who are Black. All appear tied up with ropes next to the phrase, “D.C. liberals are pulling the strings in Richmond.”

Only Askew and Cole appear off the ground, tightly bound around the waist. The third Black lawmaker, Del. Roslyn Tyler of Sussex County, doesn’t appear suspended by ropes in the flyer. She is running in a competitive rematch against Republican challenger Otto Wachsmann.

“These images rely on some of the laziest, most blatantly racist tropes about Black people in history,” Askew tweeted over the weekend.

Last month, in response to a flyer that featured his photo on a box of matches lit on fire, Askew had tweeted: “I’m a black man. Depicting any black person as burning or hanging propagates some of the most dangerous, racist tropes in history. This dog whistle attack has no place in our politics.”

“When I first saw it, I was frustrated. Seriously? It didn’t hit me, though, until I saw that [Del. Chris Hurst’s] was different. It’s a whistle saying, ‘Hey, show up, because we can’t let this Black guy do what he’s doing,’” Cole said.

“This is Old Dominion. This is the capital of the Confederacy.”

In its statement, the Republican Party of Virginia said that “Askew, Cole, and Tyler’s extreme liberal records have been such a failure that they know the only path to victory is trying to trick Virginians into thinking it’s racist for anyone to hold any candidate accountable for raising the cost of living, working to defund the police, and telling parents they don’t matter.”

Rich Anderson, the state GOP chairman, noted that the ads explicitly say they were not authorized by the Republican candidates whom they support.

A spokeswoman for the Democratic Legislative Campaign Committee, Christina Polizzi, said that a thwarted plot by two neo-Nazis to attack House Speaker Eileen Filler-Corn, D-Fairfax, “shows that these kinds of mailers, whether racist or antisemitic, can incite violence.”

The group called on the Republican Party and the candidates to apologize and disavow the mailers.

Reached through their campaigns, neither Durant nor Wachsmann responded to requests for comment. Republican Karen Greenhalgh, who is challenging Askew, also did not respond, but issued a statement on Twitter over the weekend distancing herself from the mailer.

“Many in the 85th district received an offensive mailer today. Neither myself nor anyone on my campaign staff approved this mailer. I do not condone its imagery,” she said. “My campaign is about job creation, lower taxes, and safer neighborhoods. It’s not about offensive mail pieces.”

A Republican mailer depicting Del. Josh Cole as a “puppet” of Democratic leaders in Washington shows the Fredericksburg Democrat bound with ropes.