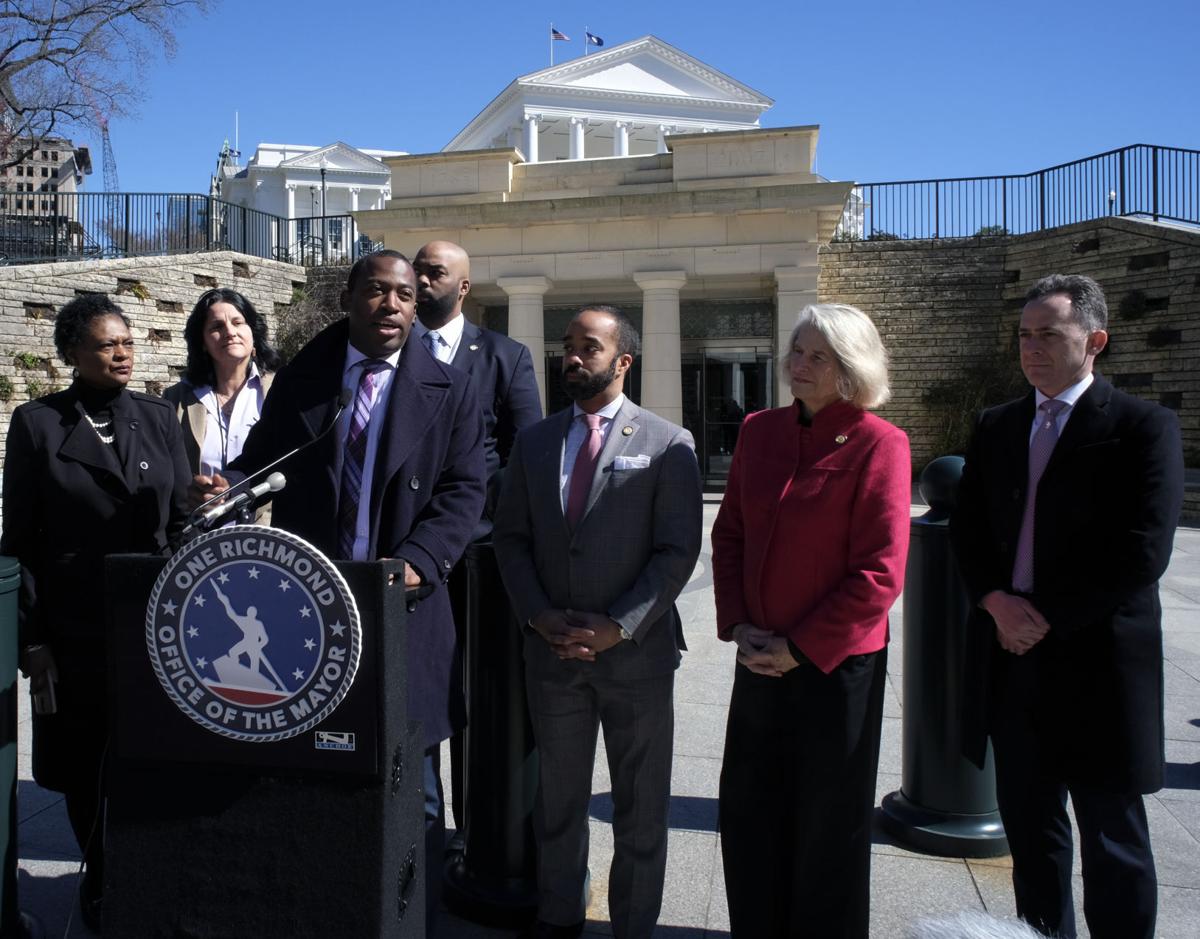 In 2018, Richmond Dels. Dawn Adams (second from left), Betsy Carr (second from right) and Jeff Bourne (third from right) were among officials who attended a news conference at the state Capitol about funding for the city’s schools. A new proposed House of Delegates map would put all three Democrat incumbents in the same district. 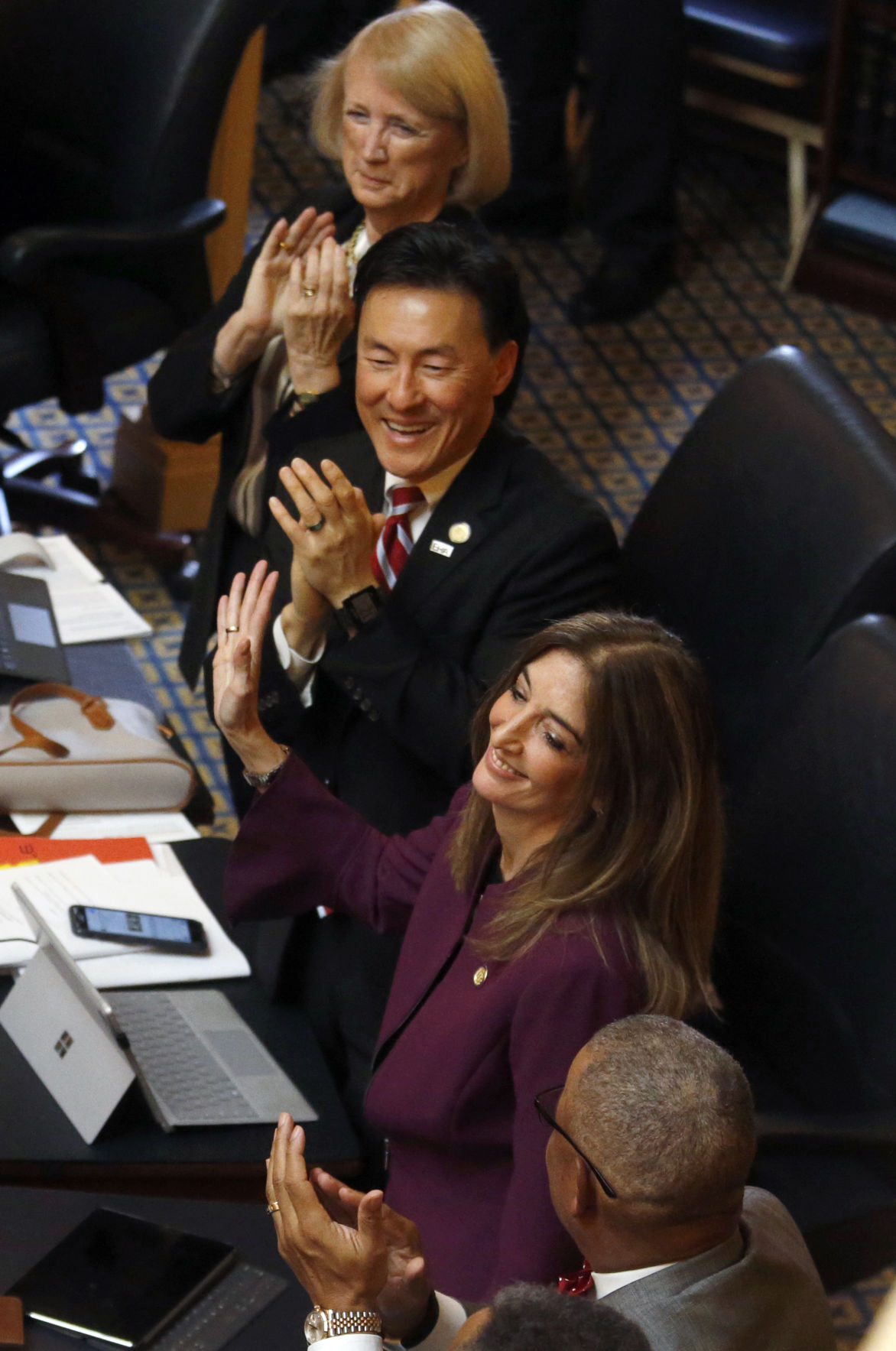 A proposed map of House of Delegates districts would put the outgoing speaker of the House, Del. Eileen Filler-Corn (second from bottom), D-Fairfax, in the same district as Del. Vivian Watts (at top), D-Fairfax.

More than 60 incumbents in the Virginia House and Senate would face running against a colleague, moving or retiring under new maps proposed for the state’s redistricting.

The maps, issued this week by two experts hired by the Virginia Supreme Court, would redraw districts for the state legislature without concern for where incumbents live, focusing more on making districts that are close in size and that protect locality boundaries.

The resulting maps would impact nearly half of the seated lawmakers in each of the state’s legislative chambers, with slightly more Republicans than Democrats facing another incumbent, according to an analysis by the Virginia Public Access Project.

“Certainly it’s not the job of the courts or the special masters to protect an individual politician,” said Liz White, the executive director of One Virginia 2021, a nonpartisan group that advocated for the state’s new redistricting process.

“The fact that there are so many incumbent pairs underscores how gerrymandered the maps were before and the importance of starting from scratch.”

Among Democrats, one high-profile pairing includes outgoing House Speaker Eileen Filler-Corn of Fairfax, who would be drawn into the same district as Del. Vivian Watts, D-Fairfax, a prominent legislator who has served in the chamber since 1996.

On the GOP side, Del. Kathy Byron, R-Bedford, the third highest-ranking Republican, could be caught up in a nomination fight against Del. Wendell Walker, R-Lynchburg.

In the upper chamber, Sens. Amanda Chase, R-Chesterfield, and Ghazala Hashmi, D-Chesterfield, would be drawn into the same district. Chase had planned to run next year for the GOP nomination in the 7th Congressional District, but the experts’ proposed congressional map would move the district out of the Richmond area and to Northern Virginia, leaving Chase’s next move unclear.

The maps are still just proposals and will face public scrutiny over the next week. After virtual public hearings on Dec. 15 and Dec. 17, the court’s justices could propose changes to the maps or adopt them as they are.

Henry Chambers, a voting and redistricting expert at the University of Richmond, said he would be “shocked” to see the court step in to separate incumbent pairings. Although the Virginia Redistricting Commission, which unsuccessfully tried to draw new maps, favored protecting incumbents, many members of the panel still didn’t support the concept.

“My guess is there will be enough comments on both sides of the issue,” Chambers said. “I can’t imagine they would step into what is one of the most politically fraught issues with the map. I frankly don’t see that happening.”

Another looming question for the courts, Chambers noted, is whether members of the House of Delegates should run again in the new districts in special elections next fall or wait until the next regularly scheduled House election in 2023. For lawmakers in remade districts, the decision could determine how much time they have to introduce themselves to new constituencies.

White said she too found no legal impetus for the courts to try to protect incumbents, especially since neither party’s incumbents are significantly disadvantaged over the other. She said that at best, the court could decide that weighing in would be somehow “beneficial to the commonwealth.”

Chambers said there is a case to be made for protecting some incumbents given that nearly half of the legislature’s 140 incumbents would be affected.

Chambers said that if lawmakers don’t move to a new district to avoid an incumbent match-up, the result would be a legislature made up of many newcomers.

“We probably ought to be concerned about the new blood coming into the General Assembly, particularly if they have no real experience in public service. That’s a backside problem that arises,” he said.

“It could be that legislative aides fill that void. People who you don’t know have that much more power and influence. And lobbyists, who wonder about the legislature and have more experience, also may play a bigger role.”

White said her group has declined to take a position on the incumbent protection issue, but said that it generally, opposed the days of legislative leaders protecting their own in backroom deals.

“If you ask any nonpartisan reformer, they would say, don’t look at incumbent addresses. These districts don’t belong to the legislature,” she said.

In 2018, Richmond Dels. Dawn Adams (second from left), Betsy Carr (second from right) and Jeff Bourne (third from right) were among officials who attended a news conference at the state Capitol about funding for the city’s schools. A new proposed House of Delegates map would put all three Democrat incumbents in the same district.

A proposed map of House of Delegates districts would put the outgoing speaker of the House, Del. Eileen Filler-Corn (second from bottom), D-Fairfax, in the same district as Del. Vivian Watts (at top), D-Fairfax.