A federal judge, finding “extraordinary relief is warranted,” has issued a restraining order against Envigo’s Cumberland County breeding facility in an effort to halt its “torturous” mistreatment of beagle dogs and puppies.

U.S. District Judge Norman Moon ordered Envigo to “immediately cease breeding, selling, or otherwise dealing in beagles at the Cumberland Facility, until in full compliance” with his order, which requires a long list of corrective actions, including that Envigo provide its dogs quality food, water, shelter and veterinary care.

The judge also halted Envigo from euthanizing any beagle at the Cumberland site without the consent of the U.S. Attorney’s Office, or a court order if the federal prosecutor does not consent. 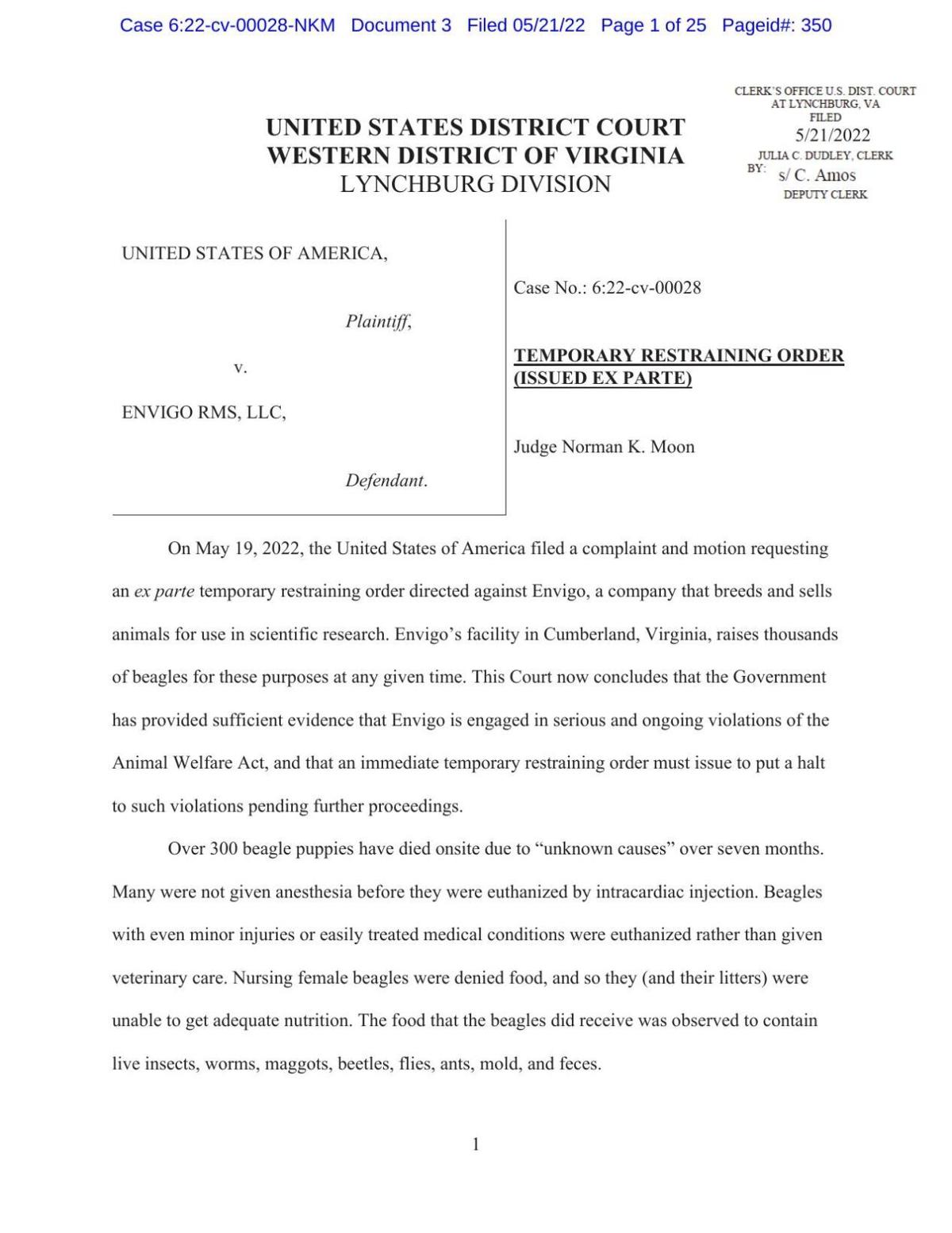 “This Court now concludes that the Government has provided sufficient evidence that Envigo is engaged in serious and ongoing violations of the Animal Welfare Act, and that an immediate temporary restraining order must issue to put a halt to such violations,” pending further proceedings, Moon wrote in an order he issued Saturday.

“The list of serious violations of the Animal Welfare Act and its regulations goes on and on,” the judge wrote in a damning 25-page order filed in U.S. District Court in Lynchburg.

“Envigo has been operating and continues to operate in a manner that flagrantly disregards numerous health protocols, placing the health of animals in serious danger and risk of death,” Moon wrote.

While federal agents on Wednesday seized 145 beagles “that were at the most acute and immediate risk to their health,” the judge wrote, “many more beagles still face inadequate food and water, veterinary care, and the other torturous conditions described. The grave health risks to the beagles remaining in Envigo’s care remain — they are immediate and substantial.”

The judge issued his order days after Chris Kavanaugh, U.S. attorney for the Western District of Virginia, urged the judge to compel the company to stop mistreating dogs in violation of the Animal Welfare Act.

Envigo said in a statement Saturday that it is fully cooperating with federal authorities at the facility. It said it “denies the allegations in the complaint and will vigorously defend against the lawsuit.”

It added: “The highest quality of animal welfare is a core value of our company and is central to our business. Our mission at Envigo is to help our customers realize the full potential of their scientific and medical research, which ultimately contributes to significant improvements in the lives of both humans and animals.

“We remain steadfast in our commitment to advancing science and adhering to the highest professional standards.”

Envigo’s practices at the Cumberland site have brought political condemnation from across the aisle in Virginia.

In April, Gov. Glenn Youngkin signed legislation to protect dogs and cats at breeding facilities — a bipartisan legislative effort that stemmed from dozens of animal welfare violations at the Cumberland County beagle mill.

Sens. Mark Warner and Tim Kaine have urged federal officials to suspend and move to revoke the license of Envigo’s Cumberland County facility, condemning its “continued horrific mistreatment” of beagles it breeds for research.

Moon wrote that the government is likely to prevail on the merits of its case.

“The Government contends that Envigo has consistently failed, despite repeated warnings and opportunities for correction, to meet its obligations under AWA’s implementing regulations to provide adequate veterinary care. Based on the overwhelming evidence produced by the Government, the Court agrees.”

The judge’s restraining order is meant to halt Envigo’s mistreatment of dogs at the site while providing the company time to respond to the federal prosecutor’s civil complaint.

The judge’s order details a litany of Envigo abuses of beagles it breeds for research.

“Over 300 beagle puppies have died onsite due to ‘unknown causes’ over seven months. Many were not given anesthesia before they were euthanized by intracardiac injection. Beagles with even minor injuries or easily treated medical conditions were euthanized rather than given veterinary care.

“Nursing female beagles were denied food, and so they (and their litters) were unable to get adequate nutrition. The food that the beagles did receive was observed to contain live insects, worms, maggots, beetles, flies, ants, mold, and feces.

“Beagle puppies remained housed in their enclosures as they were hosed down with cold water, leaving them shivering. Over an eight-week period, 25 beagle puppies died from cold exposure. The enclosures were overcrowded. The facility was understaffed. Inspectors found over 900 beagle and beagle puppy records to be incomplete or inaccurate.”

Last year, People for the Ethical Treatment of Animals conducted an undercover investigation at the facility, citing mistreatment among 5,000 beagle dogs and puppies bred and housed at the site. PETA posted disturbing video of beagles housed in what it called a “prison like factory.”

PETA Senior Vice President Daphna Nachminovitch said of the judge’s order: “The court’s action is groundbreaking and essential to protect the beagles. Federal intervention is the only way to prevent the neglect and abuse of dogs that PETA’s undercover investigation exposed — and we hope it leads to the end of this miserable business.”

Surrounded by almost a dozen beagles, Gov. Glenn Youngkin on Monday signed legislation to protect dogs and cats at breeding facilities — a leg…

Sens. Mark Warner and Tim Kaine are urging a federal agency to suspend and move to revoke the license of Envigo’s Cumberland County facility, …

"While we can’t undo the damage done during the Northam administration, we are taking action going forward to end COVID-era draconian overreach," the governor said.

A circuit court judge is upholding the attorney general’s withholding of a document that purportedly claims it’s not the Youngkin administration’s purview to remove Virginia from a multi-state carbon market.

Petersburg's search for a casino developer remains shrouded in secrecy, with no records available to show how the city selected The Cordish Companies to operate the proposed gaming resort.

Schapiro: Even when time was short, McEachin played a long game

You didn’t want to bet against Donald McEachin.

"I completely disagree with his comments," Youngkin said at The Wall Street Journal's CEO Council in Washington.

She will advise leadership on how to appeal to political independents and swing voters in those unpredictable districts.

Is Trump next? Some believe DA could file new charges after Trump Organization

Is Trump next? Some believe DA could file new charges after Trump Organization