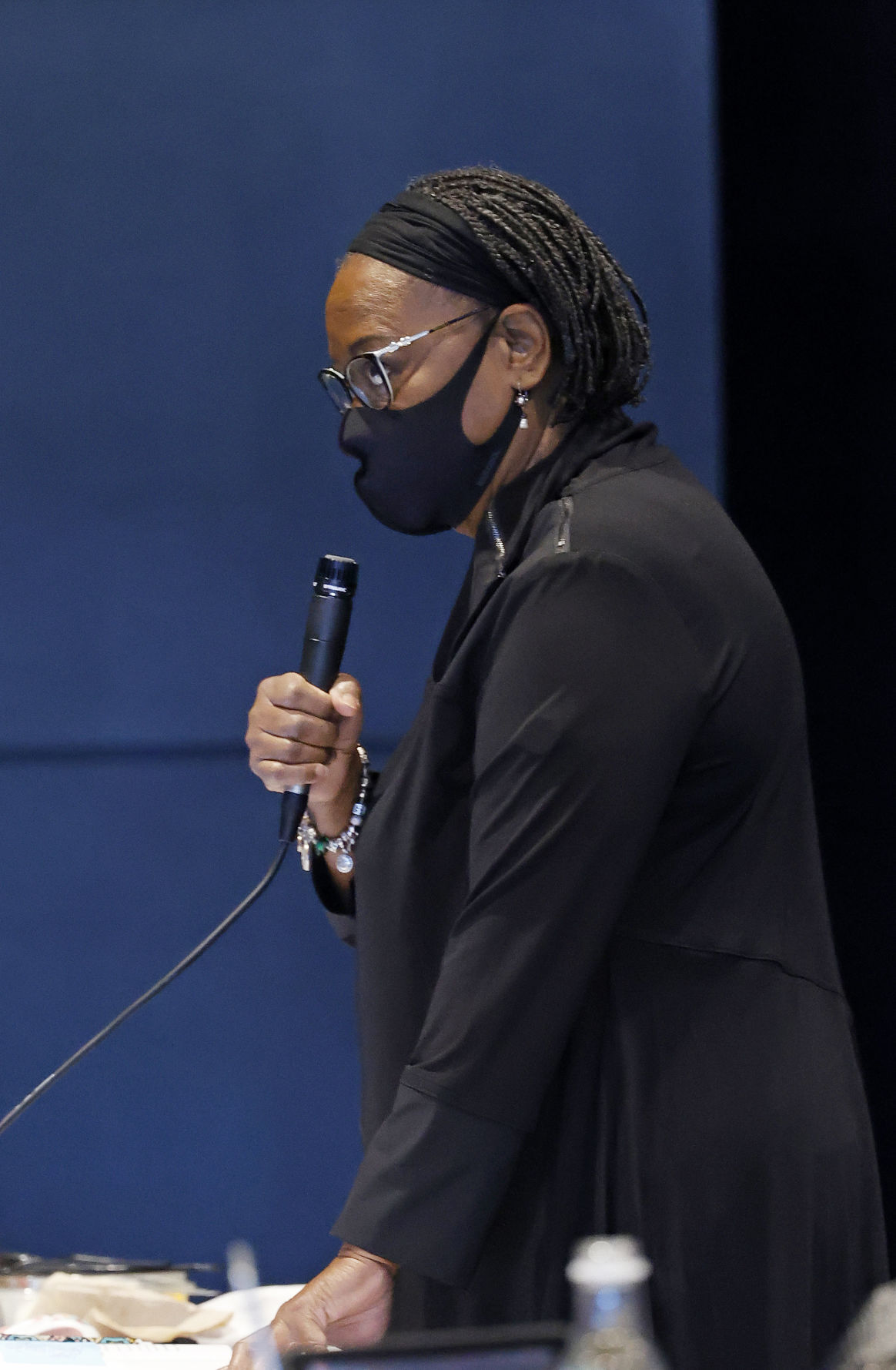 Sen. Mamie Locke, D-Hampton, speaks in support to Senate Bill 1165, relating to abolishing the death penalty, as the Senate meets at the Science Museum of Va. in Richmond, Va., Wed., Feb. 3, 2021.

The Virginia Senate late Friday changed a proposed constitutional amendment that is meant to restore the voting rights of people convicted of felonies. The change would clarify that people in prison are not entitled to vote, though as proposed, lawmakers could create a process in a future session to allow it.

"We had a caucus discussion about it" among Senate Democrats "and it's what the caucus felt like it could support," said Sen. Scott Surovell, D-Fairfax, who sponsored the change on the Senate floor. "I think our primary objective needs to be to take the Jim Crow abomination out of the constitution. I don't think we'd had a lot of public debate about that particular idea yet. I'd like to hear more before we take that step."

Sheba Williams regained her right to vote by the grace of Gov. Terry McAuliffe in 2015. She’s grateful for the ability to vote in the years since, but overriding is her belief that her right should have never been taken away.

Williams, an advocate with the criminal justice advocacy group Nolef Turns Inc., is urging lawmakers to end the revocation of voting rights in Virginia, one of just three states that permanently disenfranchise people convicted of a felony.

Support for the concept — which would require a constitutional amendment — is ample among Democrats in Virginia. But the House and the Senate have approved dueling proposals, which means lawmakers will have to decide how far to go in a matter of weeks.

House Resolution 555 introduced by Majority Leader Charniele Herring, D-Alexandria, would automatically restore voting rights for people who had been convicted of a felony, upon their release from prison.

Senate Resolution 272 by Sen. Mamie Locke, D-Hampton, aims to go further, proposing to do away with any language that removes a person’s right to vote due to a felony conviction or because they’ve been deemed mentally incompetent.

Gov. Ralph Northam, who has restored voting rights to 40,000 people, is championing Herring’s measure, which she co-authored with the administration. The original resolution proposed rights restoration after a convicted felon completed incarceration and probation. The measure was amended in the House to restore rights upon release.

More than half a million people previously convicted of a felony live in Virginia, and the state estimates that about 1 in 7 are ineligible to vote. An additional 33,000 individuals are incarcerated in Virginia due to a felony conviction, all of whom would regain their right to vote from prison under Locke’s resolution.

While the state’s governors have in recent years used their powers to grant people their voting rights back, the process is a messy one that is not applied equally across the state. Bob McDonnell, a Republican who served as governor from 2010 to 2014, kick-started the process in earnest during his administration, restoring voting rights to about 8,000 people.

At 21, Williams was convicted — wrongly, she has said — of stealing from an employer. Williams said she was not incarcerated but served nine years of probation. She went on to graduate from college and raise three children.

Williams and other civil rights advocates say they support both pieces of legislation, hoping that at least one will clear the General Assembly. But they are partial to Locke’s measure based on their fundamental belief that voting rights should not be abridged.

“Voting is a fundamental right, and there is no basis for taking away someone’s right to vote. It’s not something that concerns public safety, or a huge financial barrier,” Williams said in an interview, arguing that Vermont and Maine already allow people to vote absentee from prison. “We support both bills, but the reasoning behind going for [the Senate bill] is the history of felony disenfranchisement and how it came to be in our constitution.”

That history goes back to the early 20th century, and the concerted effort over the decades that followed to curtail Black people’s right to vote.

A broad coalition of civil rights groups urged Northam to instead back Locke’s measure, arguing that amending the constitution and removing the language is necessary to begin to right the wrongs of racial disenfranchisement in Virginia. The group pointed to transcripts of the state’s constitutional convention in 1902, when many lawmakers talked of the need to “purify” the ballot, referring to Black voters.

“We are challenging felony disenfranchisement and seeking to guarantee a right to vote for all because doing so is essential to assuring racial justice at the ballot box,” the group wrote in the letter to the governor, dated Jan. 14.

“Our voting rights work is not about giving people convicted of felonies a ‘second chance,’” the letter read. “It is about finally righting the wrong done by politicians in post-Reconstruction Virginia who enshrined felony disenfranchisement in our constitution precisely and solely to keep Black Virginians from being able to participate in our political system or exercise their rights as citizens to engage as active partners in our democratic republic.”

Locke, the chair of the Senate Democratic Caucus, has long advocated on the issue in the legislature.

“Automatic restoration of rights is not racial justice,” Locke said before the Senate Privileges and Elections Committee on Feb. 4. “It is beyond dispute that felony disenfranchisement is as Jim Crow as poll taxes.

“Why are we talking about giving something back to people that should have never been taken away in the first place? The right to vote is the essential currency of democracy. Withholding it from 100,000 of Black Virginians whether they are incarcerated or not makes a mockery of any pretense that we are a commonwealth seeking to right past wrongs, and offer reparations for past injustices.”

Locke has championed the measure for years, with it meeting the resistance of Republican lawmakers in each session. Republicans have instead proposed resolutions to restore voting rights for felons only after they have completed their sentences and paid any fees or debts owed related to their crimes.

In order to take effect, a proposed state constitutional amendment would have to clear the House and the Senate this year and next year, with the election for the House of Delegates in between. It would then have to gain the support of a majority of voters in a statewide referendum.

Those dynamics might make Herring’s bill more likely to result in passage.

“I think that it should be a case-by-case determination based on the offender’s success or failure when they re-enter society,” said Del. Rob Bell, R-Albemarle, a former Orange County prosecutor. “That position has been consistent for years,” said Bell, who has been a leading voice on criminal justice issues among Republicans.

Asked about Locke’s bill, he said: “Voting in prison? I wouldn’t support that. We set laws — felonies among the most serious ones — and if someone doesn’t abide by them, we can take certain civil rights from you.”

Richard Walker of the advocacy group Bridging the Gap in Virginia, has advocated for decades on behalf of people seeking to have their voting rights restored. As a result of drug use, Walker faced an 18-month sentence for a felony, and saw his rights restored under McDonnell.

Walker said he knows many Republicans and some Democrats are hesitant to support Locke’s bill.

“I’m a firm believer that now with Democrats in control of the governorship, the House and the Senate, it should be a repeal not a restoration,” he said. “But to take a nut, I’ll support it. Anything we can get to get closer, I’ll support. I know I’ll get pushback from the folks that I advocate for.”

Walker said that for Black Virginians, rights restoring is about much more than casting a ballot: “I have family members that are still alive, that remember being attacked by police, dogs, sprayed with fire hoses to fight for the right to vote.”

Through a spokeswoman, Herring declined to comment for this story. “We are letting the resolutions go through the process and working with the Senate on this,” spokeswoman Liddy Gallagher said.

Northam spokeswoman Alena Yarmosky said: “This is an equity and civil rights issue. The governor is confident his proposal will be supported by Virginians and will result in a fairer, more just Commonwealth.”

Last November, Virginians considered and approved two constitutional amendments: one to hand over political redistricting powers to a 16-member commission, and another to nix automobile property taxes for veterans with a permanent or total disability.

Sen. Mamie Locke, D-Hampton, speaks in support to Senate Bill 1165, relating to abolishing the death penalty, as the Senate meets at the Science Museum of Va. in Richmond, Va., Wed., Feb. 3, 2021. 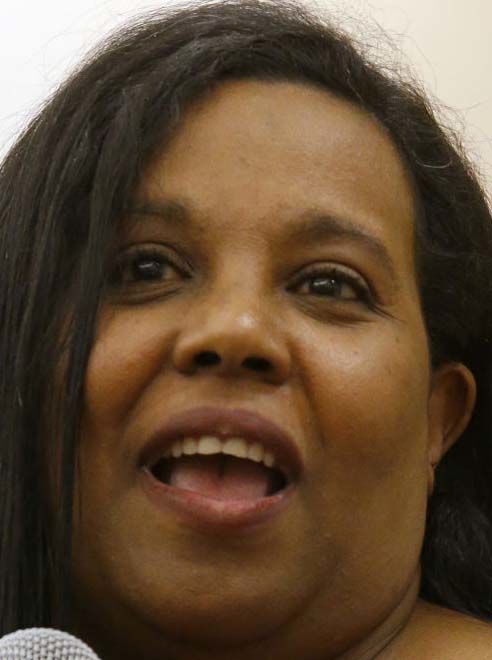