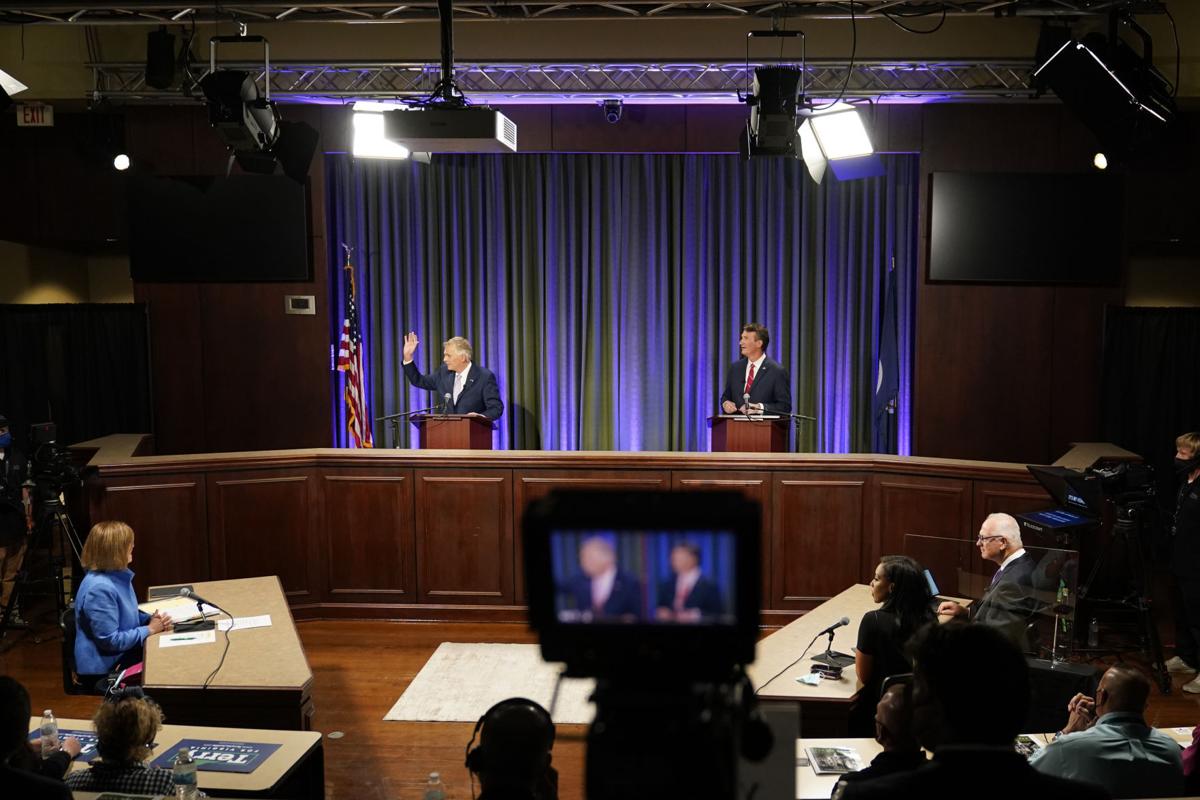 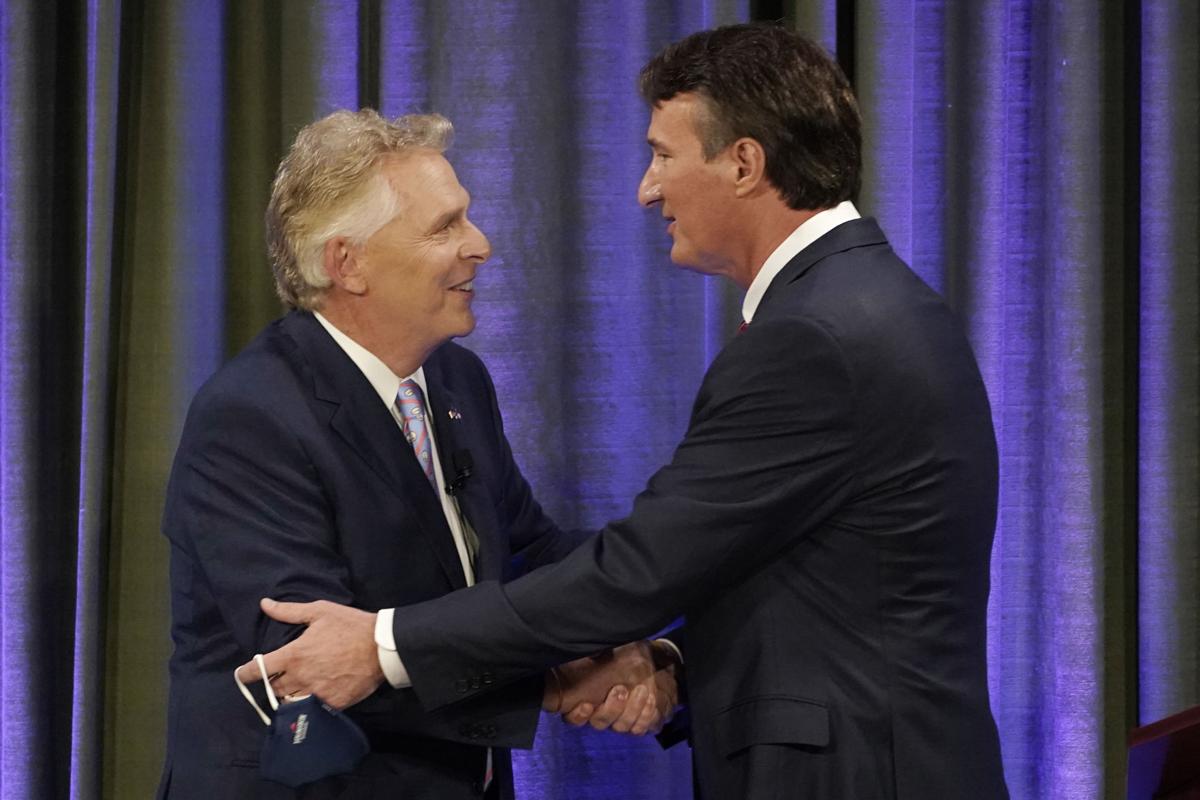 Democratic gubernatorial candidate Terry McAuliffe and Republican candidate Glenn Youngkin greet each other at the start of a debate at the Appalachian School of Law in Grundy, Va., Sept. 16. (AP Photo/Steve Helber) 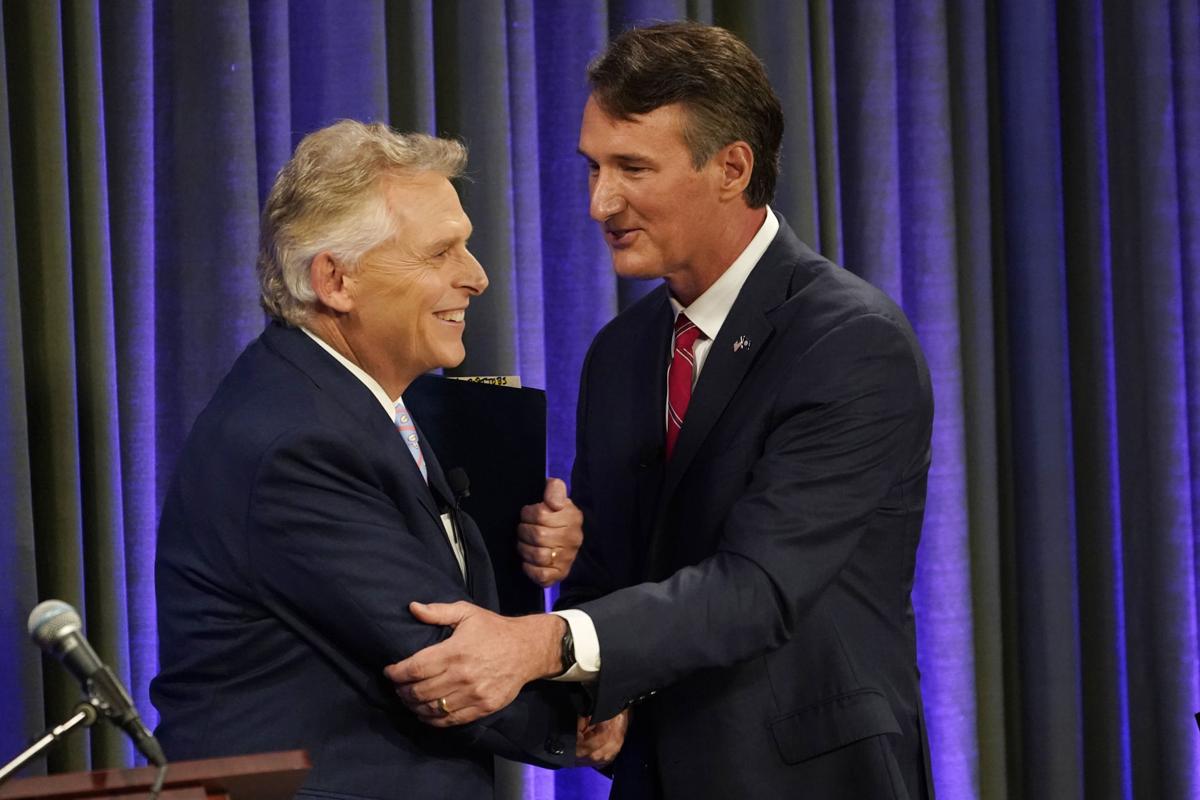 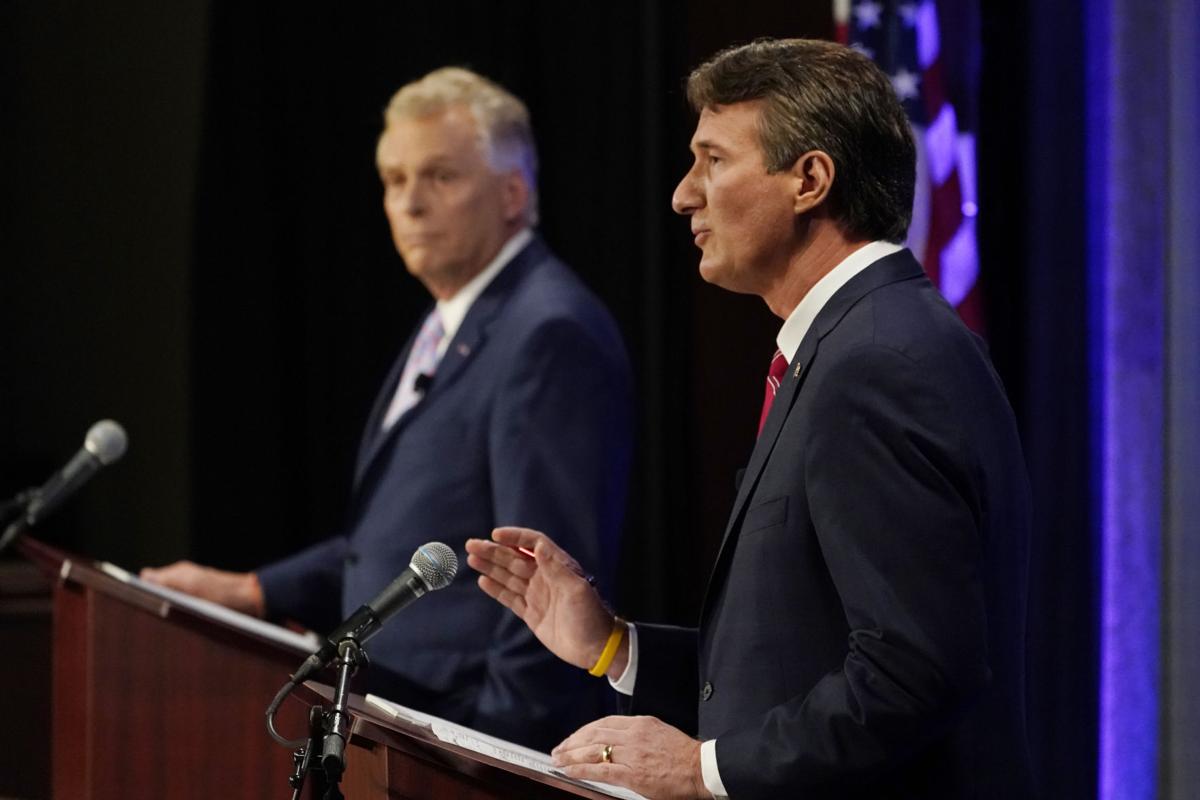 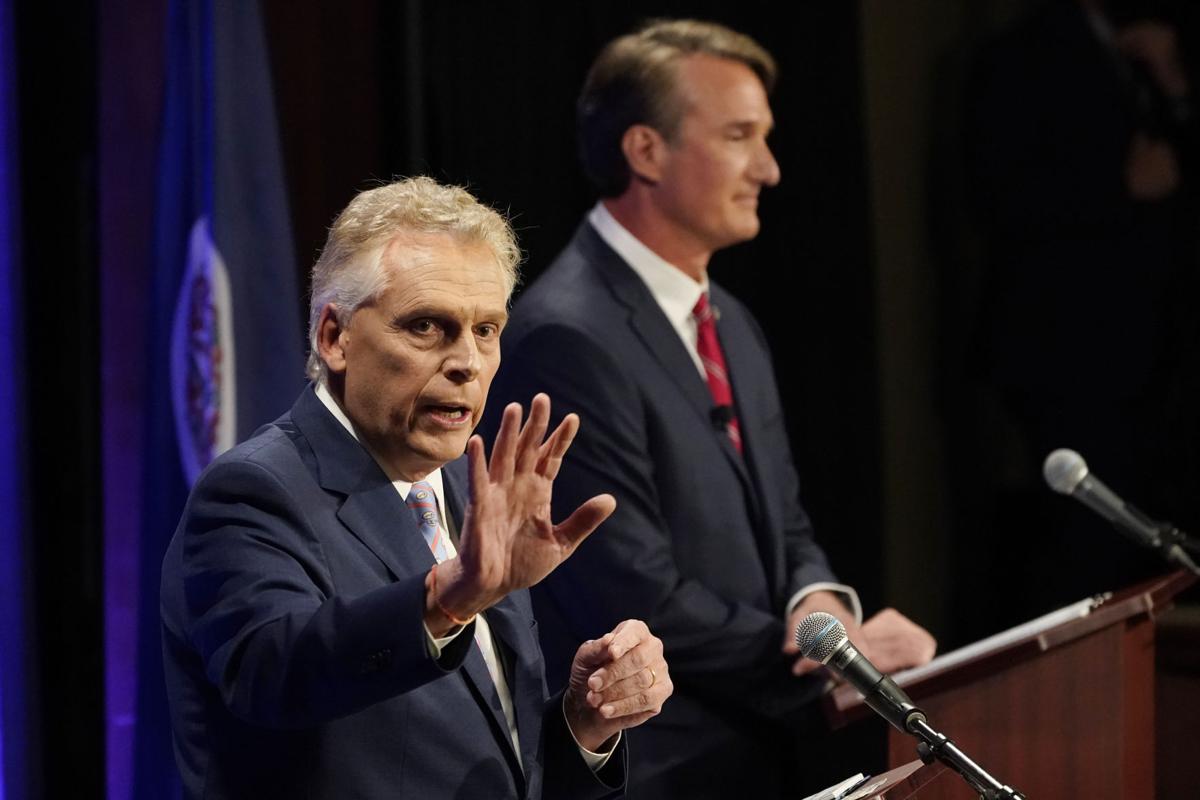 During their debate at the Appalachian School of Law in Grundy, Democratic gubernatorial nominee and former Gov. Terry McAuliffe (left photo) taunted his Republican opponent, Glenn Youngkin (right photo), as being out of control. Youngkin repeatedly characterized McAuliffe as a liar. 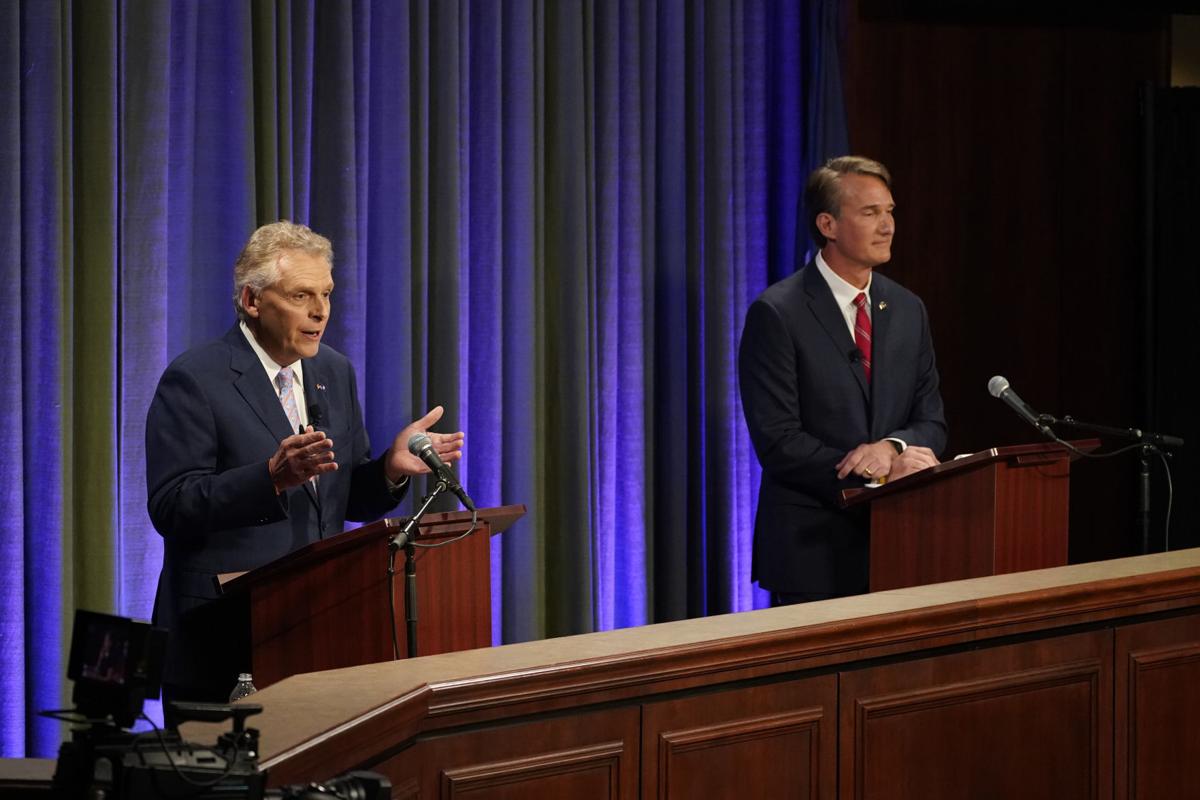 The first gubernatorial debate between Democrat Terry McAuliffe and Republican Glenn Youngkin on Thursday was a combative standoff over political differences as much as personal jabs.

The hourlong forum at the Appalachian School of Law in Southwest Virginia, about seven weeks before the Nov. 2 election, forced the candidates into firm positions on a number of key issues like abortion and police misconduct, but also became muddled by unruly baiting and arguing: Youngkin repeatedly characterized McAuliffe as a liar, while McAuliffe taunted Youngkin as being out of control.

McAuliffe and Youngkin met in Grundy for one of only two scheduled debates between the two candidates on the eve of the start of early voting in Virginia. McAuliffe, the former governor, will try to ride the popularity of his first term and Virginia’s trend in favor of Democrats back to the Executive Mansion. Youngkin, a former private equity executive, is trying to become the first Republican elected statewide since 2009 on an agenda of tax cuts and by casting himself as a political outsider.

Here are some key takeaways from the debate:

The ongoing pandemic was the first topic of the night, and it appears it will remain a key issue in the campaign’s final weeks. Vaccine mandates in particular continue to be a source of division among the candidates.

Youngkin sought to fend off attacks from the McAuliffe campaign, which derides Youngkin’s opposition to vaccine mandates as dangerous. Youngkin said it is a lie that he is opposed to vaccines or part of a growing movement in the U.S. that is skeptical of them: “That’s a lie, I’m not anti-vax.”

“I have been a strong, strong advocate for everyone to get the vaccine. I do believe that individuals should be allowed to make that decision on their own,” Youngkin said.

Pressed by moderator Susan Page, Washington bureau chief of USA Today, about whether he would challenge the legality of President Joe Biden’s sweeping vaccine mandate for employers and federal employees, Youngkin said he didn’t believe Biden had the power to do what he’s doing, but wouldn’t commit to challenging it legally if elected.

Page pressed McAuliffe on whether he would support mandating the COVID-19 vaccine for schoolchildren — who are required to meet other immunization requirements. McAuliffe said he would “absolutely” support such a mandate for children over the age of 12, the youngest age for which the vaccine has been approved. He wouldn’t weigh in on younger ages, citing the lack of federal approval.

Youngkin on Thursday took a firm stance against the state’s new clean energy policy, the Virginia Clean Economy Act, saying he would not have signed it. Youngkin’s position reflects that of many Republicans in the state.

The law would end all sale of electricity in Virginia that doesn’t come from renewable sources by the year 2045. Youngkin said the state can reduce carbon emissions without the plan, which he said is not realistic and would be expensive to bill payers.

“It puts our entire energy grid at risk. I believe in all energy sources: we can use wind and solar, but we need to preserve our clean natural gas,” Youngkin said.

McAuliffe said he would approach ending the state’s reliance on carbon more aggressively than the act does, calling for an end of nonrenewables by 2035, not 2045.

“When I think of clean energy, I think jobs,” McAuliffe said, throwing his support behind an offshore wind development by Dominion Energy off the coast of Virginia Beach.

Youngkin reiterated that he opposes abortions but said he would not sign a law like the one that recently took effect in Texas.

“I would not sign the Texas bill today. As I’ve said for this entire campaign, I’m pro-life. I believe in exceptions in the case of rape and incest and when the life of the mother is in jeopardy. But the Texas bill also was unworkable and confusing,” Youngkin said.

Asked whether he would sign a bill limiting women’s access to an abortion when a heartbeat is detected — usually at around six weeks — with the exceptions he’s outlined, Youngkin dodged.

Youngkin said instead that a “pain threshold bill” — a bill banning abortions at the point at which a fetus can feel pain, which has sometimes been deemed 20 weeks — “would be appropriate.”

McAuliffe was also pressed on the issue of abortion. Asked whether he would support a bill similar to the one proposed by Del. Kathy Tran, D-Fairfax, which would make it easier for women to access third-trimester abortions when their life is in danger, McAuliffe said “of course I would support that.”

Later, McAuliffe suggested his support for third-trimester abortions was not wholesale. “I support a woman’s right to make her own decisions up through the second trimester, that’s what I support.”

(McAuliffe again dodged on the issue of Virginia’s right-to-work law, refusing to state clearly whether he would support repeal.)

McAuliffe and Youngkin agreed that they oppose ending qualified immunity in the state — an about-face from McAuliffe who said during the Democratic primary he would support ending the policy that protects police officers from facing civil lawsuits when they violate a civilian’s civil rights on the job.

Republicans have broadly opposed ending qualified immunity, but many Democratic legislators, civil rights advocates and protesters against police brutality have said it protects police officers from facing the consequences of wrongdoing.

“I would not end it. It’s called qualified immunity for a reason. Any officer who’s acting in good faith will have the full protections of the commonwealth of Virginia,” McAuliffe said.

Former President Donald Trump, who has endorsed Youngkin, recently raised questions about the integrity of Virginia's upcoming election, as he did with the presidential election, telling conservative talk show host John Fredericks: "You know how they cheat in elections. The Virginia governor's election, you better watch it."

Youngkin, differing with Trump, said Thursday: "I do not believe there's been significant fraud in Virginia elections," and he said he does not think Democrats will cheat.

"I think we're going to have a clean, fair election and I fully expect to win," Youngkin said.

Both candidates said they expect to prevail, but that if the state certifies their opponent as the duly elected governor they will recognize the legitimacy of the result.

Democratic gubernatorial candidate Terry McAuliffe and Republican candidate Glenn Youngkin greet each other at the start of a debate at the Appalachian School of Law in Grundy, Va., Sept. 16. (AP Photo/Steve Helber)

During their debate at the Appalachian School of Law in Grundy, Democratic gubernatorial nominee and former Gov. Terry McAuliffe (left photo) taunted his Republican opponent, Glenn Youngkin (right photo), as being out of control. Youngkin repeatedly characterized McAuliffe as a liar.