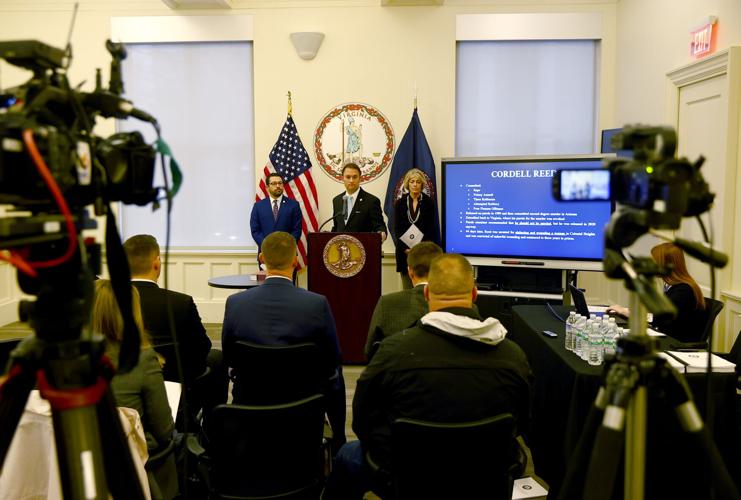 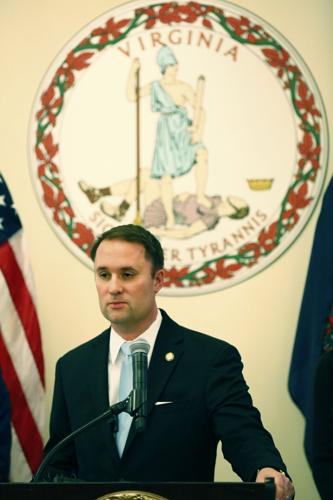 "To be clear, the actions of the Virginia Parole Board endangered public safety," Virginia Attorney General Jason Miyares said. "Every Virginian was impacted by this release."

Attorney General Jason Miyares said Wednesday that former Virginia Parole Board Chair Adrianne Bennett could have been charged with falsifying parole discharge records, but the alleged violations cannot be prosecuted because the statute of limitations has passed.

He also asserted that Bennett “unlawfully suspended” Virginia’s “three strikes” parole ineligibility statute, but Brian Moran, then Virginia’s secretary of public safety, rejected her bid for “a new, lenient interpretation” of the statute.

A new report from Miyares’ office asserts that Bennett ignored state code and board policies as the board released dozens of inmates in the spring of 2020. It also criticizes limited Northam-administration-led investigations into related matters. 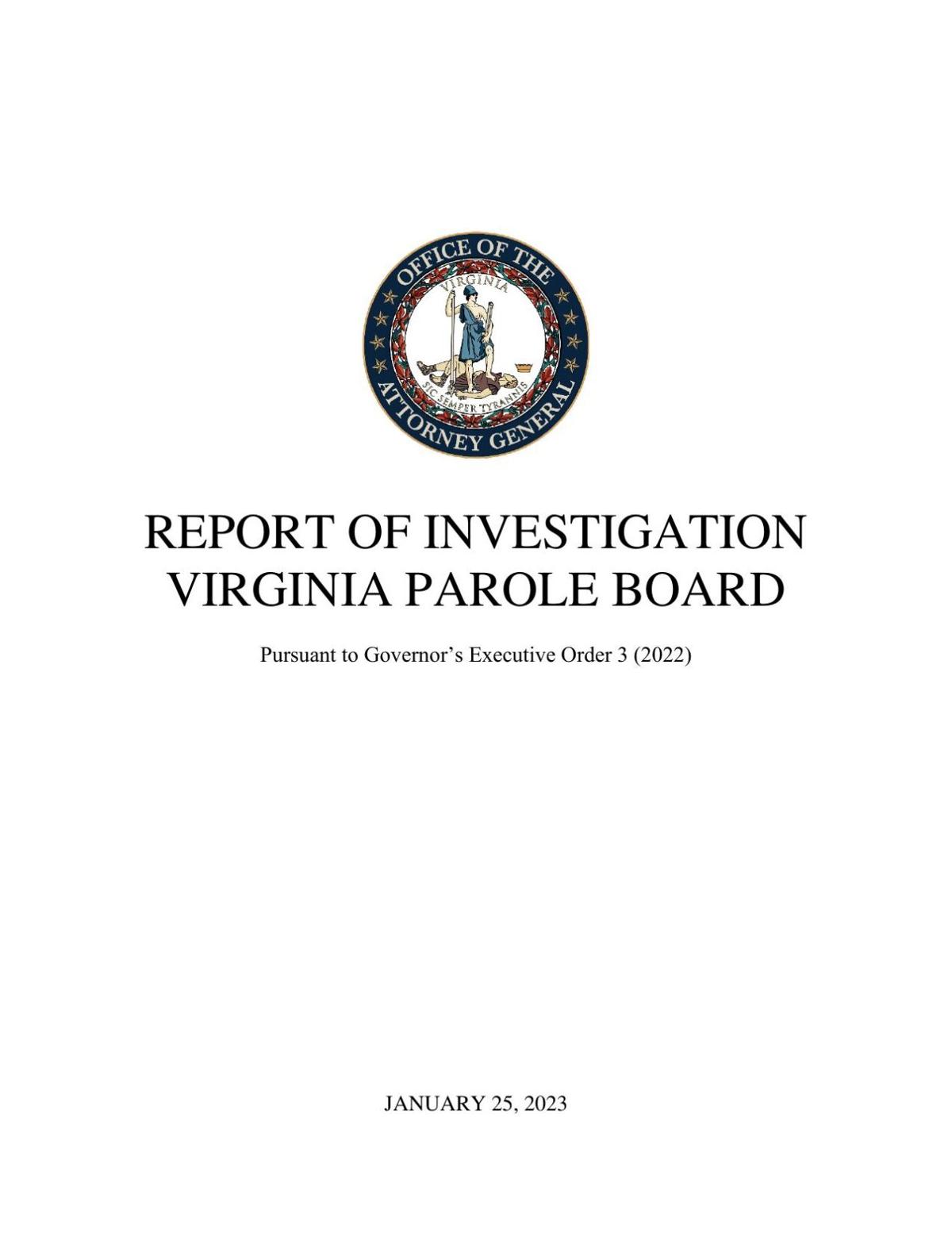 Miyares said during a news conference Wednesday that between February 2020 — when Bennett was nominated for a judgeship in Virginia Beach Juvenile and Domestic Relations Court — and her investiture in April 2020, the parole board violated a mandate in Virginia law 83 times when “it did not endeavor diligently to contact victims before making their parole decisions.”

He said the probe found the parole board violated Virginia law 66 times in the spring of 2020 by not notifying local prosecutors of an inmate’s release.

“To be clear, the actions of the Virginia Parole Board endangered public safety,” Miyares said. “Every Virginian was impacted by this release.”

Under the Virginia Code section Miyares cited — which covers “false entries or destruction of records by officers” — a violation would be a class one misdemeanor, punishable by up to 12 months in jail and a fine of up to $2,500. State law requires prosecution of most misdemeanors within a year.

Diane Toscano, a lawyer for Bennett, said in a statement: “The Office of Attorney General has cherry picked a time period for scrutiny which happens to have taken place during a once-in-a-lifetime pandemic. In all cases of parole, Judge Bennett was but one vote of the board.

“This report grossly targeted her. Judge Bennett is a dedicated public servant who has served with distinction on the bench, on the parole board, and as a respected attorney in the Virginia Beach legal community for decades. No attempt to vilify her changes that.”

The Office of the State Inspector General in 2020 found the parole board violated law and policy, including not properly notifying victims and prosecutors about people being released from prison on parole.

Interest in the board’s operations began to percolate after the parole board released 95 people from prison in March 2020: the Virginia Parole Board’s highest number of monthly releases on record. It coincided with the onset of the COVID-19 pandemic, a justification given by the Northam administration at the time.

The Attorney General’s report found in that month the parole board released 35 murderers, 11 rapists and 22 people convicted of armed robbery.

A previous Virginia government watchdog report said the board violated the law and its own policies in releasing Vincent Martin, who was sentenced to life in prison for killing Richmond police officer Michael Connors in 1979.

The new report lists a handful of released people, all of whom committed violent crimes such as murder, rape or repeated armed robbery. In Martin’s case, the report noted that the group reviewed 528 instances of victim opposition to his release from 39 different Virginia localities and nine states. Martin’s case pops up a few times in the report, as some stated Bennett’s treatment of him was biased, that she believed he was innocent and was “rushing” to release him.

“Parole Board policy and procedure allowed Vincent Martin’s parole to be rescinded based on the significant victim opposition,” the report says. “However, the Board took no such action.”

State code outlines the process for the parole board to investigate criminals’ behaviors while in prison to determine if those prisoners could be released. But the report said Bennett failed to notify victims of Martin’s crimes in spite of the fact that victims are supposed to be able to submit testimony and be informed that the incarcerated person may be released.

The Judicial Inquiry and Review Commission later investigated Bennett and suspended her from the bench in Virginia Beach. Bennett filed a petition at the Supreme Court in 2021 challenging her suspension. The court denied her request but put the entire file under seal, only opening up portions of the records in April 2022 after the Richmond Times-Dispatch challenged the sealing.

The Attorney General’s report asserts that Bennett “presided over a culture of ignoring the Virginia code, parole board policies and administrative procedures.”

The report says that when the investigators interviewed board employee Crystal Noakes, who assisted with victim contact efforts, Noakes told them Bennett “would make up policies” that were “convenient.”

Noakes is quoted saying that Bennett’s policy regarding rape victims was that “if it was a rape victim, don’t traumatize the victim by contacting them.”

The report stated that there were also 11 instances of Bennett noting an early discharge request by two employees who oversee the boards’ post release unit — but they say they never made requests.

The report also indicates that Bennett operated as if a change in law had occurred — but it hadn’t.

In 2018, Sen. Scott Surovell, D-Fairfax, briefly carried a bill that would have given the Parole Board chair “at liberty” discretions, but he ended up tabling it — seeking no further action on the measure — during that session. Bennett and the board went on to implement an unwritten policy that was never posted for public review , the report said.

“Moreover, Secretary Brian Moran,” secretary of public safety under Govs. Terry McAuliffe and Ralph Northam, “specifically rejected the change, stating that it would require action by the General Assembly; finally, the General Assembly declined to take such action, as noted above,” it said.

More than lambasting Bennett, the report accuses the Northam administration of bias that obfuscated the actions the parole board took.

The Office of the State Inspector General — a body created to investigate ineffectiveness in state government — conducted an investigation into the parole board as well in 2020. Initially, it released a six-page report, but a longer version was leaked months later.

This led to the General Assembly approving a $250,000 investigation into the OSIG investigation , which the report by the Attorney General’s office said was limited and still failed to more deeply explore alleged issues from the parole board.

While the General Assembly authorized $250,000, a spokesperson for then-Attorney General Mark Herring said the total ended up coming to $232,000.

Nixon Peabody, the firm hired by Herring, a Democrat, left out testimony relating to the parole board from the report because its investigation was focused on OSIG instead.

The report outlines possible actions the parole board and state legislature could take.

First, it suggests the parole board establish a code of ethics for its members and asserts that it is not within the parole board’s purview to investigate whether or not someone was accurately convicted. (Currently, Sen. Chap Petersen, D-Fairfax City, has a “second look” bill that would allow incarcerated people who have served at least 15 years to petition a judge to see if they are deemed able to be released early).

The report also suggests the legislature adjust state code so the parole board can hold public hearings. It says the parole board should ensure victims are notified if an incarcerated person is eligible for release before the board votes on the matter.

It also recommends adjustments to the parole board’s structure, additional staffing and updates to the technology it uses.

In noting how former governors pardoned certain offenders, both the Attorney General’s report and the parole board would support the General Assembly passing a law to require governors seek victim input before making pardons.

Though a statute of limitations may prevent her from being charged for the findings, Miyares said in the report that “the ball is in the General Assembly’s court” if the legislative body seeks to issue articles of impeachment for her current judge role.

In a statement from Senate Republicans, Senate Minority Leader Tommy Norment, R-James City, said “we must demand accountability for these egregious actions and derelictions of duty.” He called on Bennett “to avoid legislative action regarding her status by immediately submitting her resignation from the bench.” 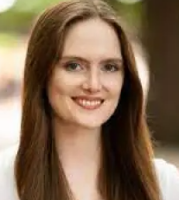 The judge's filing at the Supreme Court was against the members of the state's Judicial Inquiry and Review Commission and its general counsel. She challenged their constitutional authority to suspend her, according to the records the court unsealed on Thursday.

The Senate Education and Health Committee on Thursday formally defeated three bills to ban most abortions in the state after certain junctures, likely ending the fight for abortion curbs in this legislative session.

Ally compromises on governor's push for $200M in transportation funds

A substitute bill would restore legislative oversight over a transportation fund for economic development and require that it receive money through the state budget process.

"To be clear, the actions of the Virginia Parole Board endangered public safety," Virginia Attorney General Jason Miyares said. "Every Virginian was impacted by this release." 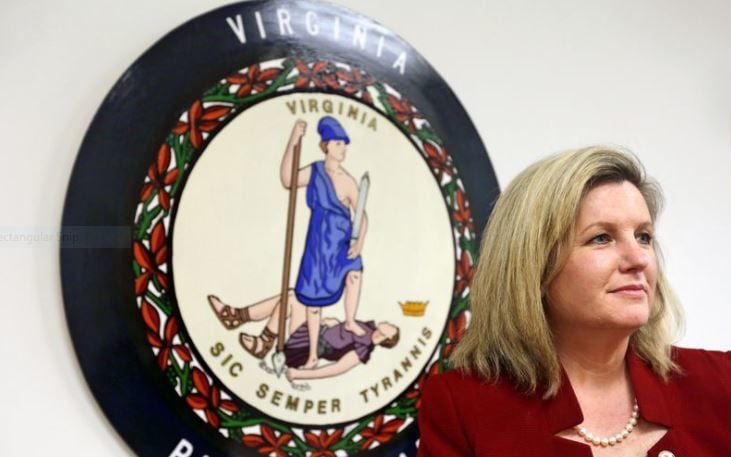