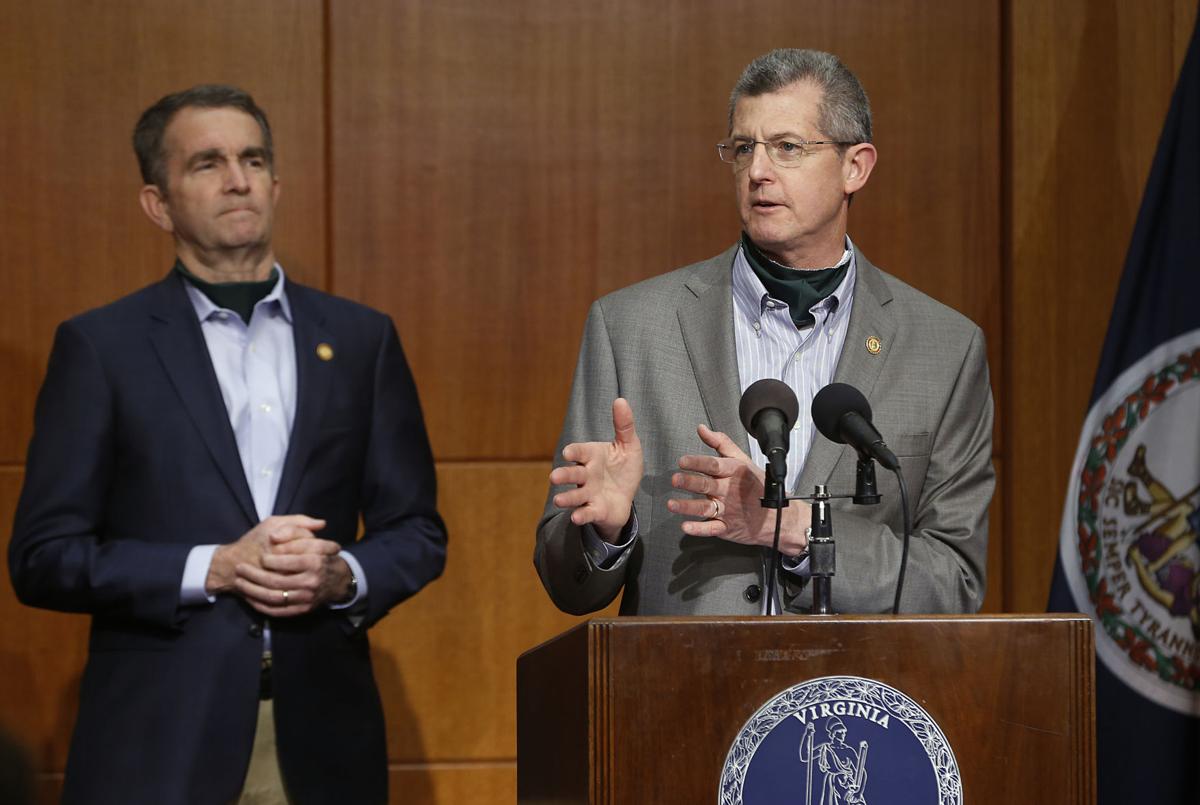 In this April 15 image Virginia Secretary of Health and Human Resources Dr. Daniel Carey speaks during a COVID-19 briefing in the Patrick Henry Building. Gov. Ralph Northam is at left.

Thanksgiving will be a test for Virginia’s nursing homes, as cases of COVID-19 surge in the communities surrounding them and public health officials warn against traditional holiday travel and family gatherings.

But the state is boosting supplies of rapid tests for the coronavirus at nursing homes across Virginia so they can keep close watch for potential infection of employees and residents, while long-term care facilities look for ways to allow residents to meet safely with their families.

Last week, Virginia began shipping 239,000 kits for COVID-19 rapid testing to skilled nursing facilities that the state has purchased through a 10-state compact to augment supplies from the federal government. The antigen tests detect traces of proteins that become present when people shed the virus and potentially expose others.

“It is a huge gift to us,” said Karen Stanfield, chief operating officer at Saber Healthcare Group, the Ohio-based owner of more than 30 nursing facilities in Virginia, including two in the Richmond area that were hit hard by deadly outbreaks during the pandemic that first reached the state in early March.

COVID-19 outbreaks have infected about 15,000 residents of long-term care facilities in Virginia and killed about 1,900, accounting for almost half of the more than 3,900 deaths from the virus in the state. The deaths include 19 at Tyler’s Retreat at Iron Bridge in Chesterfield County and 11 at Autumn Care of Mechanicsville in Hanover County — both skilled nursing facilities owned by Saber — according to the long-term care task force led by the Virginia Department of Health.

The new supply of antigen tests, coupled with rapid tests that the U.S. Department of Health and Human Services has been distributing directly or through the state, will enable nursing homes to detect the presence of COVID-19 in as quickly as 15 minutes. The kits allow long-term care facilities to test employees, residents and, potentially, visitors to quickly detect the presence of a virus that is often spread by people who carry it without showing symptoms.

“The more we have the ability to test and have a result quickly, either for our employees or our residents, the sooner we can prevent them from spreading” the virus, Stanfield said.

The state supplies, part of an initial $7 million order through the State Alliance for Testing, had not yet arrived Friday at Lucy Corr, a continuing care community in Chesterfield. It currently is relying on rapid tests that the federal government has supplied or that the facility has purchased.

The additional tests will be welcome at Lucy Corr, which tests 240 employees every Tuesday and expects that to double to almost 500 a week if the rate of positive tests rises to 10% in Chesterfield. The county’s positivity rate is already at the precipice, at 9.8%, according to the federal Centers for Medicare and Medicaid Services, which has a three-level threshold for testing requirements at nursing homes based on the spread of the virus in their communities.

The rapid testing capability and zero COVID-19 cases among residents have enabled Lucy Corr to allow an average of 75 indoor visits a week to residents in the past two months, in addition to outdoor and online visits. CEO Derrick Kendall said the onset of cold weather and the increase in COVID-19 cases in the community are likely to end indoor family visits on the cusp of the holiday.

“If we hit 10% [positivity rate] by Tuesday, two days before Thanksgiving, residents are not going to be able to see their families” in person inside the facility, Kendall said.

Lucy Corr is scheduling the last of the indoor family visits over the weekend in case that happens. The facility, with more than 200 skilled nursing beds, plans to cut back in-person, indoor visits for more than a week after Thanksgiving to allow time to assess the anticipated surge in COVID-19 cases afterward, he said. “We’ll convert to outdoor visits on pretty days,” as well as virtual visits by computer.

“It’s very difficult for us to guess behavior, to guess the virus and guess the weather,” Kendall said.

Keith Hare, president and CEO of the Virginia Health Care Association and the Virginia Center for Assisted Living, said the tests will support efforts by nursing homes to eventually expand family visits under federal protocols.

“When it’s safe to have in-person visits, we want to be able to test the family members, when possible,” Hare said.

Virginia decided to buy the antigen tests, manufactured by Becton Dickinson, through an interstate compact because the state previously wasn’t getting enough rapid test supplies from the federal government, which subsequently “has stepped up,” said Secretary of Health and Human Resources Dan Carey in a recent interview.

The state is spending $16 million in federal CARES Act money to purchase BD Veritor System tests, said Virginia Commissioner of Health Norman Oliver, who has told legislators that the state expects to place the second order in early December.

The tests from the interstate compact will augment supplies of a different antigen test, BinaxNOW, made by Abbott Laboratories, that the federal government has been distributing directly to nursing homes, assisted living facilities, three historically Black colleges and universities, home health and hospice operations.

Oliver said the state also is receiving and distributing the BinaxNOW tests to state mental hospitals, state prisons, free clinics and state military facilities. It also plans to send 100,000 test kits to private hospitals and colleges and universities, which can use the tests for students before they return home for Thanksgiving.

For state health officials, the tests are helpful to quickly detect the virus and prevent it from spreading in congregate settings, such as nursing homes, but the real challenge lies outside those facilities.

“Testing is great,” said Carey, the state secretary of health and human resources, “but we’ve got to get the incidence down in communities.”

The panel charged with recommending a replacement for Virginia's Robert E. Lee statue at the U.S. Capitol says the designee can be someone kno…

Schapiro: Va. Republicans and the politics of process

The departing congressman from Nelson County sees QAnon conspiracy theorists as a threat to the republic and explores the theme of true believers in a new book on one of his favorite topics.

As new General Assembly Building rises, so do questions about labor practices at site

By the time the next governor takes office, a tunnel long sought by the state Senate will be partly built between the Capitol and a new Genera…

Northam backs effort to legalize recreational use of marijuana in Virginia

Gov. Ralph Northam threw the weight of his administration behind efforts to legalize the recreational use of marijuana in Virginia, citing rac…

In this April 15 image Virginia Secretary of Health and Human Resources Dr. Daniel Carey speaks during a COVID-19 briefing in the Patrick Henry Building. Gov. Ralph Northam is at left.