On Inauguration Eve, Youngkin proclaims spirit of Virginia 'alive and well'
0 Comments
Share this
1 of 2 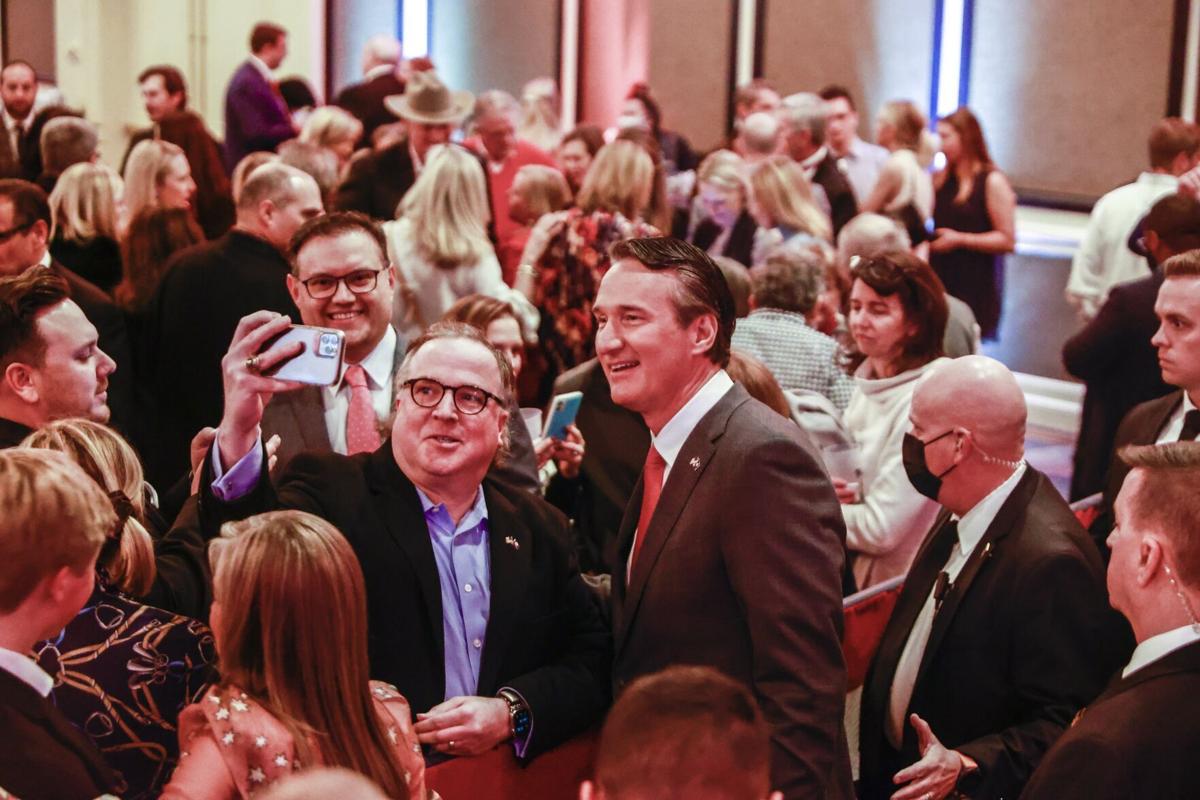 Gov.-Elect Glenn Youngkin poses for a photo Friday evening at the Spirit of Virginia welcome reception at the Omni Richmond Hotel. Youngkin will be sworn in Saturday as Virginia 74th governor. 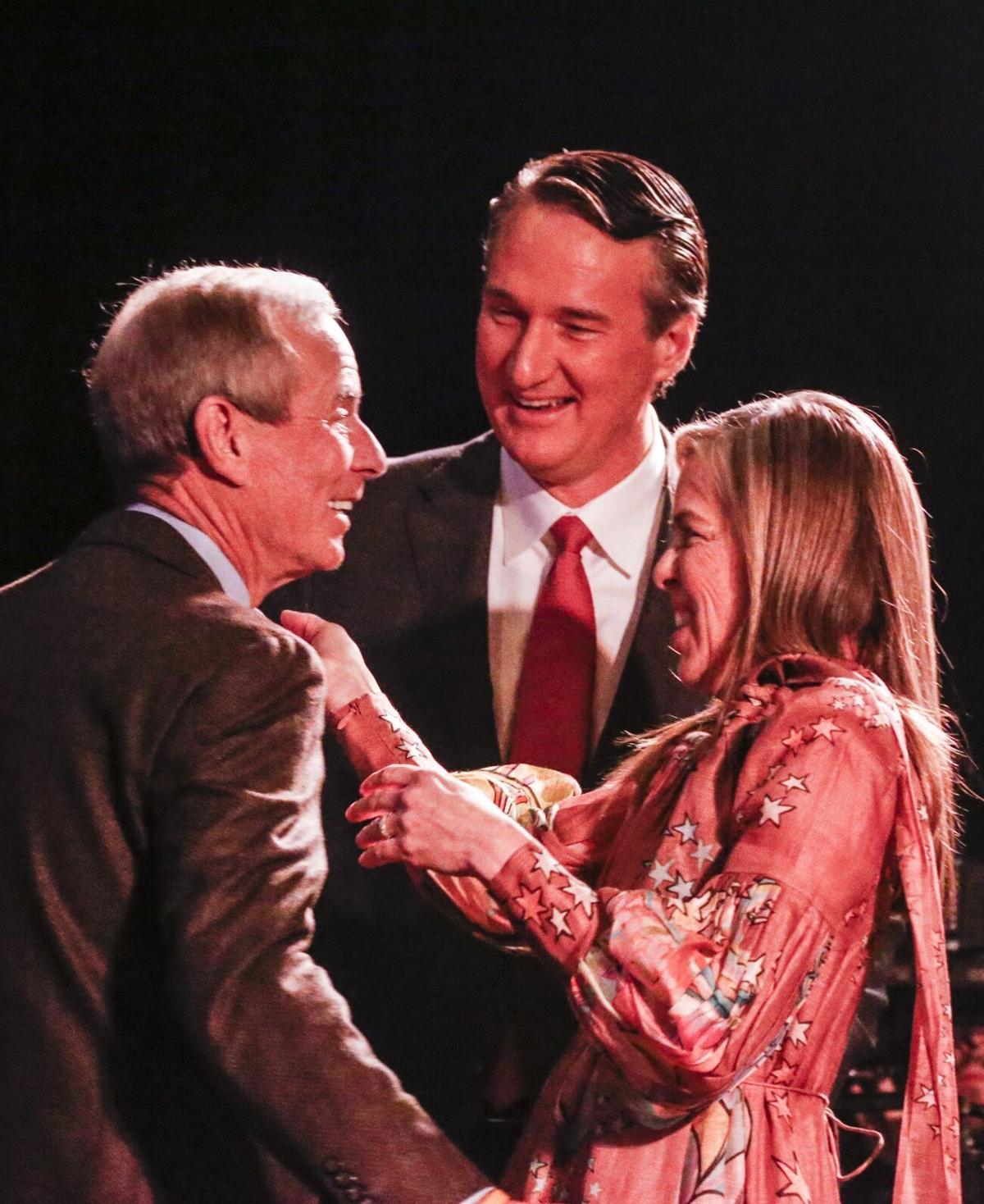 Virginia Beach developer Bruce Thompson (left), chairman of the inaugural committee, greeted Gov.-elect Glenn Youngkin and his wife, Suzanne, during a reception at the Omni Richmond Hotel on Friday. More than 6,000 people are expected at Saturday’s inauguration.

Youngkin appeared onstage with his wife, Suzanne, Virginia’s next first lady, to thunderous applause and cheers from more than 700 supporters — many of them Republican legislators — who had gathered for a festive reception Friday evening celebrating “the Spirit of Virginia Welcome” at the Omni Richmond Hotel.

“I hope you feel the spirit of Virginia because it is alive and well,” he exclaimed.

Youngkin was happy, too, because he said he had spent a full week with his wife after a year of hard campaigning and preparing to form an administration for Virginia’s executive branch of government.

“It’s the longest time we have been together in a year,” he said, adding with a laugh, “Nothing to be proud of, folks!”

Youngkin will be sworn in Saturday along with fellow Republicans Winsome Earle-Sears as lieutenant governor and Jason Miyares as attorney general.

Youngkin had begun the day in a show of community service, spreading mulch around the Reconciliation Statue along the Richmond Slave Trail in Shockoe Bottom, which was home to the second largest domestic slave market in the United States before the Civil War.

He had visited the commemorative trail of historic markers during his gubernatorial campaign and recalled “the way it made us feel a connection to our history.”

“Yes, the toughest part of our nation’s history,” he added, “but it also helps us understand where we can go and how much progress we have made.”

But after the sun went down, the party lights came on — with Youngkin’s last name in large letters etched in bright white bulbs with a red star over it at the top of the stairs to greet guests to the Omni ballroom for the reception.

Republicans reveled in the moment, with the Grand Old Party poised to regain control of all three executive branch offices and the House of Delegates, just two years after losing two decades of control over the House and starved for a victory in a statewide race since 2009. Few in the crowd at the large cocktail party wore masks amid the continuing COVID-19 pandemic.

Later Friday night, the Youngkins were to host a “Spirit of Imagination” dinner at the Science Museum of Virginia.

At the Omni, House Speaker Todd Gilbert, R-Shenandoah, who had been sworn in as House leader two days earlier, relished his role as emcee “to welcome you to the newly liberated capital of Virginia!”

“The air is just a little bit better when you walk around Capitol Square,” Gilbert said.

Sen. Steve Newman, R-Lynchburg, one of Youngkin’s earliest allies in his bid to become governor, led the audience in prayer, while Del. Amanda Batten, R-James City, followed in reciting the Pledge of Allegiance.

“We come to you in the spirit of hope and expectation,” Newman prayed.

Virginia Beach developer Bruce Thompson, chairman of the Youngkin inaugural committee, promised the biggest crowd for a gubernatorial inauguration in Virginia history, with more than 6,000 people expected in Capitol Square.

Youngkin looked forward to his inauguration in three stages.

The first, he said, would be celebration, “not of what’s behind us, but what’s ahead of us.”

The second comes after the ceremony and parade. “In the afternoon, we’re going to work because it’s Day One,” said Youngkin, echoing the refrain of the late summer unveiling of a tax cut package that he promised would be a priority from his first day as governor.

Finally, at Main Street Station on Saturday night, he said, “Let me tell you, we are going to have a ball!”

But for all the high spirits, Youngkin stayed close to his political themes from a victory that he said was “the result of a movement” rather than a campaign.

He savored the 52-48 majority that Republicans hold in the House and reminded the audience that all 140 seats in both chambers of the General Assembly are up for election next year. Democrats hold a 21-19 majority in the Senate.

Gov.-Elect Glenn Youngkin poses for a photo Friday evening at the Spirit of Virginia welcome reception at the Omni Richmond Hotel. Youngkin will be sworn in Saturday as Virginia 74th governor.

Virginia Beach developer Bruce Thompson (left), chairman of the inaugural committee, greeted Gov.-elect Glenn Youngkin and his wife, Suzanne, during a reception at the Omni Richmond Hotel on Friday. More than 6,000 people are expected at Saturday’s inauguration.