Schapiro: Another distinction for a Va. history-maker, Mary Sue Terry
0 Comments
Share this
1 of 2 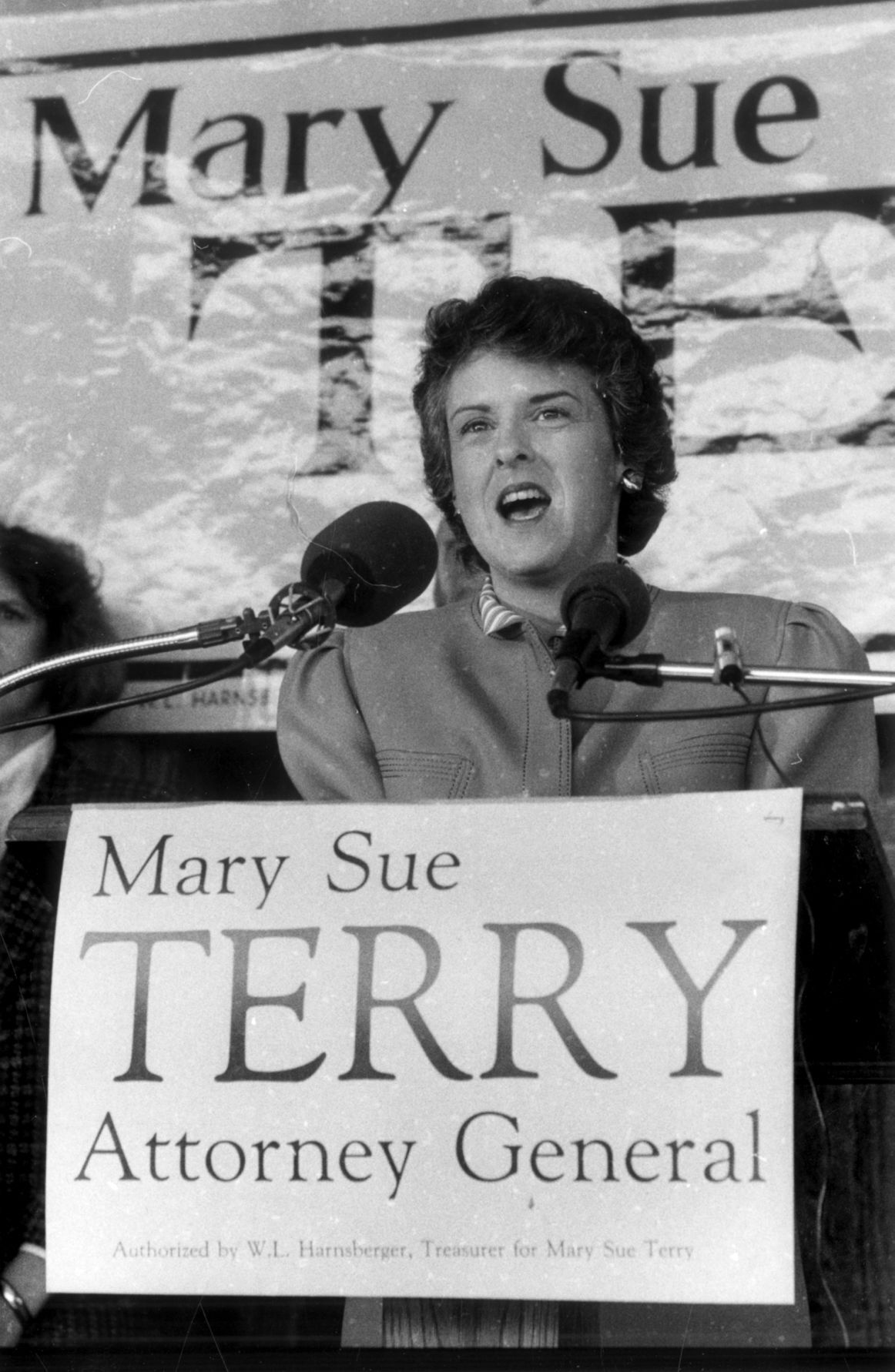 Mary Sue Terry, shown in 1985, is the only woman who has been elected to statewide office in Virginia. Her latest career is the ministry.

She's been a small-town lawyer in rural Patrick County, on the Virginia-North Carolina border, where she grew up and to which she returned in the 1990s. Terry was a member of the House of Delegates for nearly a decade. She shattered the statewide gender barrier in 1985, winning the first of two terms as attorney general.

Terry ran for governor in 1993 and was heavily favored to become the state's first female governor but lost to Republican George Allen. She then taught at her undergraduate alma mater, the University of Richmond. Next, Terry moved back to the family farm outside tiny Critz to raise cattle.

Her latest career: the ministry.

In December, at age 74, Terry will be graduated from the Duke University Divinity School, becoming a minister in the United Methodist Church. The denomination, which founded the Duke seminary, is the third-largest in Virginia, behind Roman Catholicism and Baptist, the faith in which Terry was raised.

In leaving a goal-focused life rooted in political and professional ambitions, Terry said - with a hint of humor during a conversation with me Monday via Zoom - "That when I die, there will be more people missing me than 30 years ago. I'm more mellow. I'm not as driven."

Though Terry said she cannot be ordained because she is too old, the pastorate caps a journey of faith and politics, from which she has been largely absent since her defeat to Allen, whose career ended in ignominy with his loss for a second term in the U.S. Senate in 2006 because of voter outrage over his racial putdown of an Indian American.

It was through Terry's little-known friendship with two of Allen's biggest backers, Bill and Anne Kincaid, both tireless religious conservatives, that Terry's exploration of faith accelerated. Through the Kincaids, Terry was introduced to Pentecostalism, some of whose practitioners - because of the faith's emphasis on God as an animated presence - speak in tongues.

Terry - perhaps because she is a lawyer - said she cooled to Pentecostalism because it appeared to subordinate man's law to the Lord's Gospel. During her Richmond years, Terry also tried the Episcopal Church, attending a West End parish in which "most of the people were Republicans."

Terry said her transition from a political life to a spiritual one had been underway during her years in office; that she have might have passed on a second term as attorney general, likely forgoing a campaign for governor: "If God had called me at the time, I'm pretty sure I would have responded."

There were hints of her life ahead during her years in politics. Recalling evenings when the state carried out executions - she would renounce capital punishment after leaving office - Terry said that while listening to the final preparations over an open telephone line, she would recite to herself the Lord's Prayer.

Terry re-emerged this past spring with her endorsement of a fellow Democrat, who - as Terry did - aspires to history: Del. Jay Jones of Norfolk opposed two-term incumbent Mark Herring for the attorney general nomination. Though defeated in the primary, Jones, likely running again in 2025, aims to become the state's first Black attorney general.

The endorsement - unsolicited by Jones, who was born in 1989, the year Terry was re-elected AG - was offered in a telephone call from Terry.

"She challenged the common notion that the office is designed for a white man to sit in the attorney general's chair," said Jones, adding that Terry appreciated from her own experience that women and Black people "have to work to twice as hard to get half as far."

Religion is no less fraught than politics. In leaping from latter to the former, Terry said that, in some respects, she has come under scrutiny as a religious figure that tracks what she experienced in politics.

Recalling her experience as fill-in minister at a small Methodist church in Woolwine, in northern Patrick County, Terry said that in urging congregants to be mindful of the poor, hungry and disadvantaged, she was told by some that it was "hard to take without being seen as preaching the Democratic line."

And the United Methodist Church remains riven by an issue on which Virginia voters have shifted: same-sex marriage. The church does not recognize it and could be heading to break-up because of it. Virginians approved a constitutional ban on same-sex marriage in 2006 but now favor marriage equality.

One of Terry's running mates in 1985 and 1989 was also a historic figure: Doug Wilder, Virginia's first Black lieutenant governor, and later, the nation's first elective Black governor. His initial feat has been equaled, with Justin Fairfax's victory for lieutenant governor in 2017.

Fairfax, who unsuccessfully sought the Democratic attorney general's nomination four years earlier against Herring, was among three Black candidates for the party's gubernatorial nomination in June, two of whom were women.

No matter the outcome of the election for lieutenant governor next month, Virginia will have a woman in statewide office for the first time since Terry's victories in the 1980s. The winner will also be a woman of color. Democrat Hala Ayala identifies as Black and Hispanic. Republican Winsome Sears is Black.

Neither has solicited Terry's advice on running statewide.

That means Terry has more time to walk with God.

Mary Sue Terry, shown in 1985, is the only woman who has been elected to statewide office in Virginia. Her latest career is the ministry.