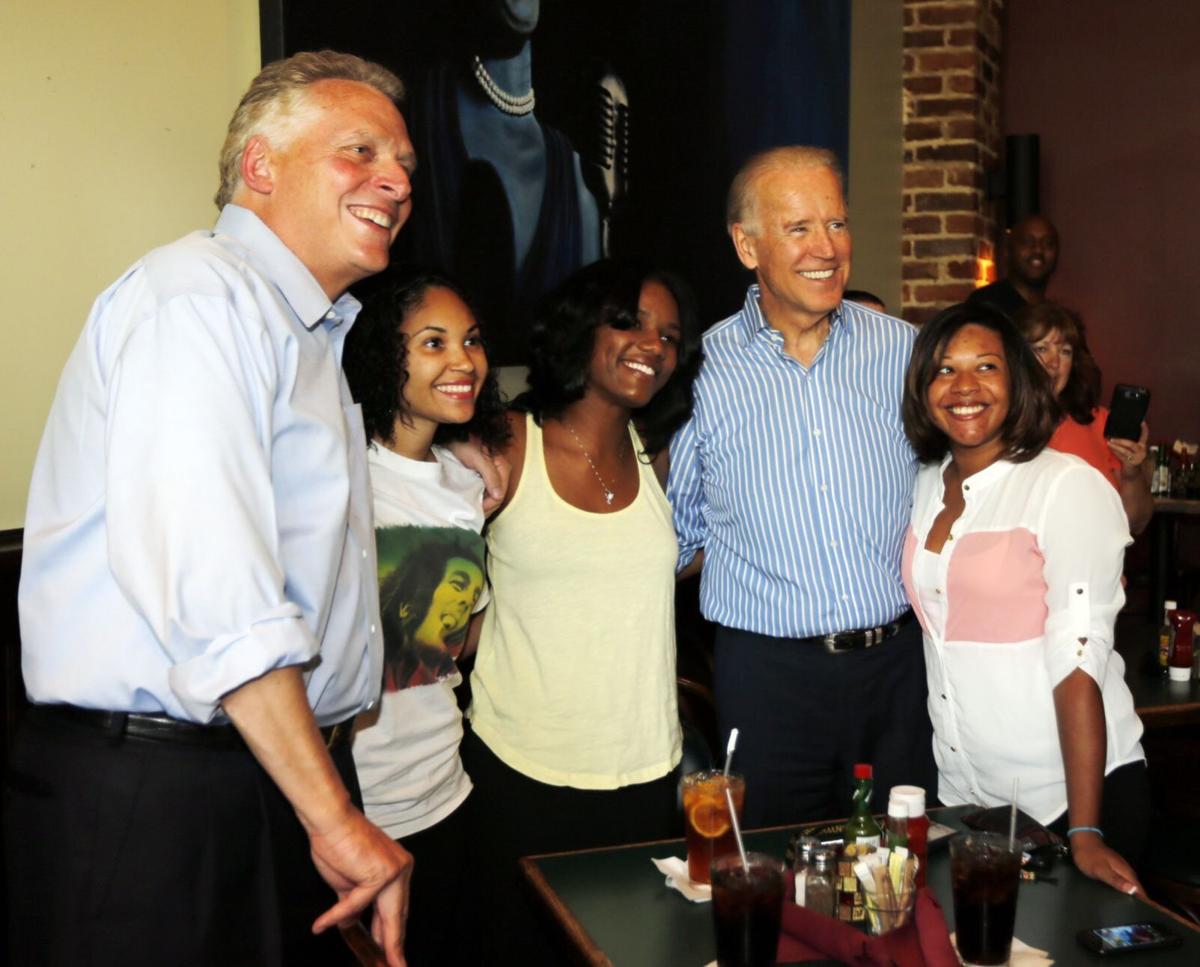 In 2013, Terry McAuliffe (left) and then-Vice President Joe Biden posed for photos with patrons of Croaker’s Spot in Richmond.

President Joe Biden’s visit to Virginia this week isn’t his first on behalf of Terry McAuliffe and it won’t be his last.

In the countdown hours to the Super Tuesday primary in March 2020, Biden — his moribund candidacy having been revived a week earlier by a big win in South Carolina fueled by a big Black vote — stumped in Norfolk with The Macker, who had forsaken his own impossible dream of the presidency for a second go as governor.

The news was supposed to be that McAuliffe and most of the Democratic Establishment here were rallying to Biden ahead of simultaneous primaries in Virginia and 14 other states and territories. Instead, Biden buried the lead with another of his signature off-script utterances.

McAuliffe, Biden exclaimed, was the “once and future governor of Virginia” — and this was 16 months before McAuliffe would blow away four others in the statewide primary with 62% of the vote and carrying every locality.

It is a line Biden could recycle Friday, when he is to appear at a rally in Arlington with McAuliffe — outdoors because of COVID-19 — that’s aimed at binding up remaining wounds from the primary and revving up the Democratic grassroots, particularly in the deep-blue Washington suburbs, for the contest with Republican Glenn Youngkin.

The Biden visit — a gimme that requires a quick dash across the Potomac — will affirm, as have former President Donald Trump’s three-and-counting endorsements of Youngkin, the national significance of the Virginia campaign as a mini-referendum on what’s going on in Washington, D.C.

There are only two statewide elections in the year following a presidential contest: the New Jersey and Virginia gubernatorial races. Because New Jersey is considered a slam-dunk for Democrats, Virginia — in 2021, more a swing state than a blue state because of an expected drop in turnout from 2020 — is the only shot for both parties on off-year crowing rights.

Biden will be visiting Biden Country.

Biden carried Virginia against Trump by 10%. That’s double Hillary Clinton’s margin in 2016. And Biden did so with a coalition similar to McAuliffe’s: lots of baby boomers — a practical-minded sort and the largest voting bloc — and lots of Black people, a bulwark for Democrats at every level.

Plus, Biden is popular in Virginia, with an approval rating of 57% when it was last measured by the Wason Center for Civic Leadership at Christopher Newport University in February. One of his highest marks — 67% — was for his handling of the coronavirus pandemic.

McAuliffe is betting this mix of voters and their mood help him to a second nonconsecutive term as governor, confounding for a second time since 1976 the Virginia Curse on which GOP hopes rest: that, as a leading indicator of distaste for the party of the presidency, the party aspiring to it wins the governorship.

It was McAuliffe who snapped the curse the first time in 2013, barely beating Ken Cuccinelli, the culture warrior, one year after Democrat Barack Obama won a second term as president. If McAuliffe repeats in 2021, he’ll match Democrat-turned-Republican Mills Godwin — 1965 and 1973 — as the only governor twice elected by a vote of the people.

That McAuliffe wraps himself in the Biden mantle — and that Youngkin, depending on the audience, dons Trump’s — is a reminder Virginia politics is fully nationalized; that in a state where the majority of residents are nonnatives, party labels are important cues to voters, even in local government — usually a redoubt of nonpartisan, friends-and-neighbors voting.

This is why Youngkin needs what McAuliffe doesn’t: an unpopular president, a sputtering economy and — if there’s anything that will get the attention of suburban swing voters, many of them women — threats to their personal security and that of their families. This includes a rising homicide rate and a fresh surge in COVID-19, possibly closing schools anew.

Warner, who made his fortune in mobile communications, was elected governor in 2001 because of an economic downturn and the arrogance of one-party government. Republicans ran Richmond but proved they couldn’t by failing — because of a split on expanding the car-tax rollback — to fulfill a basic responsibility: adopting a state budget.

Democrats run the whole show now. And pushback to Trump has them pushing harder to the left. Though polling suggests even some Republican voters are comfortable with the Democratic agenda, Youngkin depicts this shift in loaded terms; that it’s not the Virginia that Virginians remember. There’s a Trump-like hint of race and class to this.

Have you noticed Youngkin won’t say whether he’d like Trump to visit Virginia before November?

Too bad Youngkin’s not running as Linwood Holton did in 1969.

The first Republican elected governor in the 20th century — there had been 21 consecutive Democrats since 1886 — Holton told voters it was the GOP’s turn and that a two-party government could forge policies that reflected where many Virginians were politically: in the broad middle.

But that’s not where Republicans are in 2021.

Virginia voters and political observers had anticipated a fresh look at the candidates for governor on July 24, in a traditional state bar ass…

The former leader of Virginia’s behavioral health system slammed Gov. Ralph Northam’s administration this week for the unfolding crisis at the…

In 2013, Terry McAuliffe (left) and then-Vice President Joe Biden posed for photos with patrons of Croaker’s Spot in Richmond.