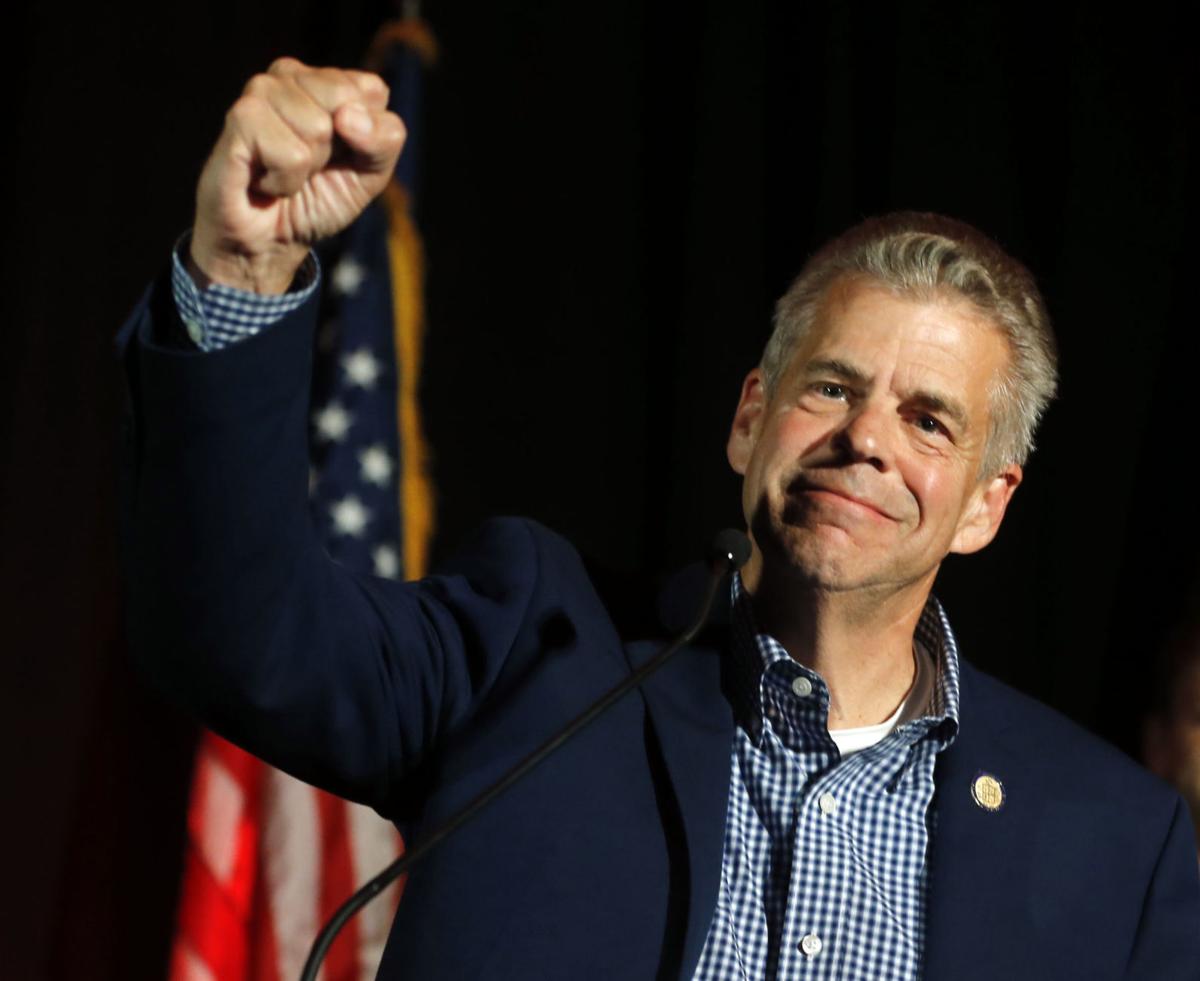 Del. Kirk Cox, R-Colonial Heights, raised his fist after claiming victory on election night in November 2019. Earlier this week, Cox announced he is running for governor.

Even at the bottom of the market — or maybe because of it — the Republican nomination for Virginia governor is worth something.

Its value is increasing now that former House Speaker Kirk Cox officially is a candidate, likely auguring others to declare. That includes a familiar face from the GOP countryside with a history of being underestimated and a newcomer from blue Northern Virginia with two presumed pluses: no apparent record and sufficient wealth to self-finance.

Cox is adopting a tone that is Donald Trump-like, acknowledging grievance — over COVID-19, cops, civil unrest and Confederate statues — but doing so with the good manners Trump, to the delight of supporters, lacks.

Cox, trying to be conservative without being crude, is attempting to simultaneously assuage the Republicans who decide the nomination next spring and center-right independent voters who decide the governorship next fall.

Cox, a retired high school government teacher from Colonial Heights, gets a lift because of who he isn’t: Amanda Chase, the Chesterfield state senator first to declare for the party’s gubernatorial nomination.

Her political IQ(-Anon) demands she out-Trump Trump — whether it’s wearing a .38-caliber revolver on her hip, not wearing a face mask during the pandemic or peddling baseless claims Trump will overtake Joe Biden.

Cox’s candidacy was supposed to have been welcomed with a sense of relief. In contrast with Chase, Cox was the mature politician at home with economic and social conservatives, who had more than three decades in the General Assembly; had recruited winning candidates; and had raised millions.

Sure, Cox would have to answer for his apostasy: supporting higher taxes for transportation in 2013 and, five years later, an expansion of Medicaid.

Both were betrayals, absolutists sneer, certain those votes will doom Cox. But there’s more to the Cox narrative. And what’s more, his allies say, it could suit an electorate made cranky by the coronavirus: his ideas for reopening classrooms, controlling college tuition and watching out for veterans.

It comes down to Cox’s balancing act and whether the Republican governing body decides Dec. 5 to select the 2021 ticket in an open-to-all primary or a members-only convention.

The betting is Republicans are a go for a primary, recognizing a convention would have to be played by rules for socially distancing and masking imposed by a term-limited Democrat, Gov. Ralph Northam.

A June primary — favored by Chase as a way to bypass party pooh-bahs — also is a setting in which Cox and others might reach beyond their traditional constituencies and begin putting in place a coalition for November.

This assumes that not lost on Republicans are the bitter lessons of primaries past. In 2017, Ed Gillespie fatally was wounded for governor against Northam after a narrow win over Virginia’s original Trump mimic, Corey Stewart.

But division could have a multiplying effect. Emmett Hanger, a state senator from agricultural Augusta County who also favored higher road taxes and Medicaid expansion, and has survived multiple nomination fights, could hoover votes in rural Virginia, assuming Chase and Cox split the Richmond area.

The folksy, patient Hanger, though strong on gun rights and abortion restrictions, would much rather — as a senior member of the budget committee — talk about services that bring Virginians together: health care, transportation and education.

Which is where Glenn Youngkin comes in. He’s the former co-CEO of the Carlyle Group, the giant investment fund whose best-known principal, David Rubenstein, invests his billions in history, whether it’s Mount Vernon or a copy of the Magna Carta.

As a presumed marker for his candidacy, Youngkin started in June a program to help those who lost their jobs to the coronavirus. A conversation about restarting the economy might be more interesting to voters than the road-funding formula.

Despite the rise of business-wary progressive Democrats, corporate credentials still count here. The debate over his investment acumen, notwithstanding, a business background helped Democrat Terry McAuliffe win for governor in 2013 and he hopes to again in 2021.

But they meant naught the first time McAuliffe ran in 2009, when — and this might be a lesson for Youngkin — he was rejected in the primary as an uninformed interloper.

That McAuliffe faces three opponents for the Democratic nomination might instill in Republicans confidence they can win next year. This assumes the primary ruptures the party, forcing McAuliffe, as a 60-something white male, to explain why — during a period of heightened racial sensitivity — he’s standing in the way of three Black candidates, two of them women.

If Democrats have shown anything during the Trump era, it’s that they’re good at falling in line. But with Trump gone, do Democrats fall apart, riven by Biden overreach? In a state that increasingly mirrors the nation and where voting, despite GOP efforts otherwise, is becoming effortless, Republicans can’t count on it.

As new General Assembly Building rises, so do questions about labor practices at site

By the time the next governor takes office, a tunnel long sought by the state Senate will be partly built between the Capitol and a new Genera…

At UVA, Fauci urges public to 'double down' on health precautions with new vaccines pending

Dr. Anthony Fauci came to the University of Virginia Medical Center virtually on Wednesday with a mixed message, of hope for vaccines to immun…

Thanksgiving will be a test for Virginia’s nursing homes, as cases of COVID-19 surge in the communities surrounding them and public health off…

Northam backs effort to legalize recreational use of marijuana in Virginia

Gov. Ralph Northam threw the weight of his administration behind efforts to legalize the recreational use of marijuana in Virginia, citing rac…

Schapiro: Va. Republicans and the politics of process

Del. Kirk Cox, R-Colonial Heights, raised his fist after claiming victory on election night in November 2019. Earlier this week, Cox announced he is running for governor.