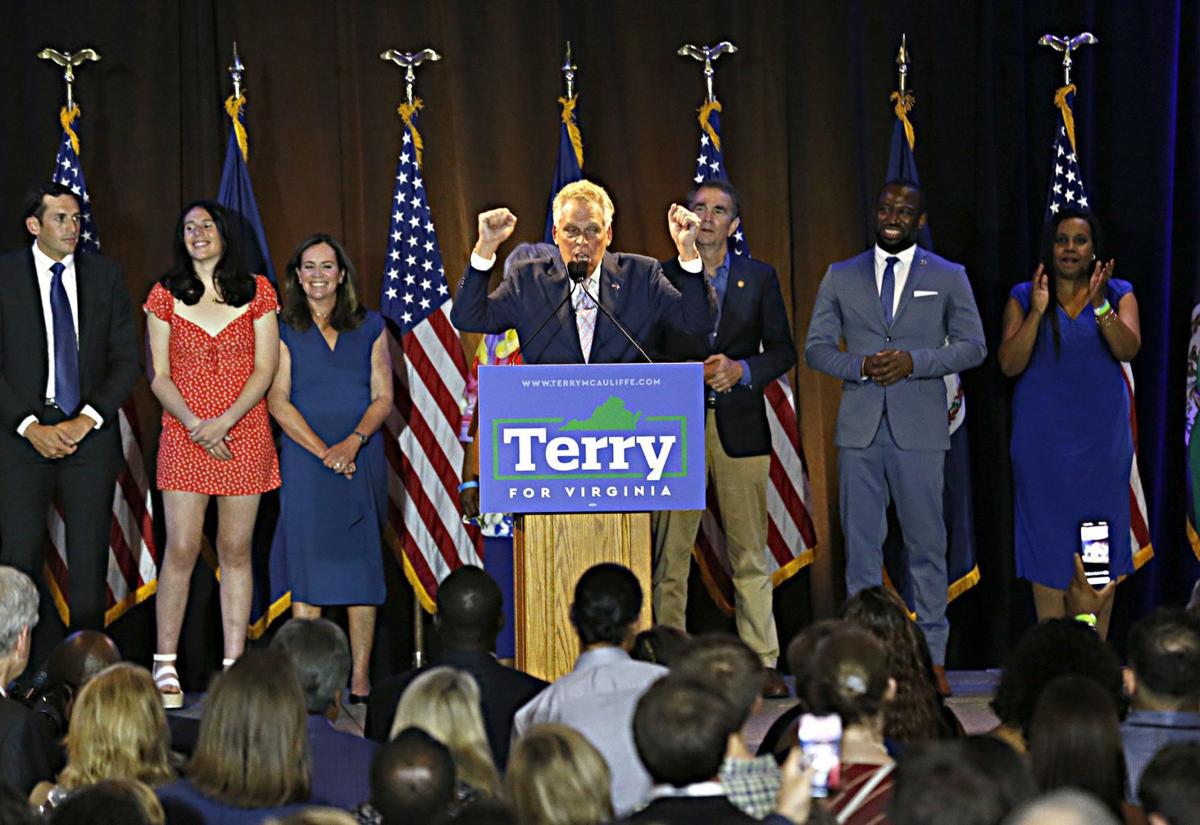 Ahead of the Democratic primary, Terry McAuliffe’s handlers — though confident he’d be nominated for a second go as Virginia governor — went out of their way to lower expectations.

They ducked questions on whether the hyperbolic, high-decibel huckster would pull more than 50% of the vote against four lesser-known opponents, including two younger women of color seeking to harness historic sensitivities over race and gender.

That McAuliffe won with 62% — snatching nearly 2 of every 3 votes and carrying all 133 counties and cities in a primary that drew 485,146, the third-highest turnout since 1977 — exceeded even his expectations.

Backstage at his headquarters at a Northern Virginia hotel, McAuliffe was — uncharacteristically — struck silent by the scale of his victory, albeit briefly.

The outcome affirmed a constant in Virginia Democratic politics for at least the past two decades: that the party — despite building pressure from the left, from which McAuliffe was pelted by his rivals — is moderate in temperament, preferring candidates who are solutions-oriented, business friendly as well as socially progressive.

Much of this is rooted in the dominance of baby boomers, the state’s largest single bloc of voters.

The third-place finisher, state Sen. Jennifer McClellan of Richmond, acknowledged as much in her messaging.

She said time and again she was running to become the nation’s first Black female governor — ditto former Del. Jennifer Carroll Foy of Prince William County, who placed second — but McClellan also emphasized her credentials as a lawyer for a telecom giant and a 16-year legislative record in which she helped settle issues corporate, social and economic.

That centrist tendency was affirmed, too, in Democratic legislative primaries.

Several of the party’s peskiest liberal incumbents — Ibraheem Samirah of Fairfax and Lee Carter of Prince William and Mark Levine of Alexandria, defeated, respectively, for the gubernatorial and lieutenant governor’s nominations — were denied renomination to the House of Delegates in favor of opponents considered more practical, less pugilistic.

McAuliffe, too, straddled the often-uneasy philosophical boundary between the party’s moderates and its restive liberals, who draw their strength from younger, Generation X and millennial voters, two slices of the electorate that, combined, nearly match baby boomers in number and are poised to soon overtake them.

The breadth of McAuliffe’s win suggests that he was supported Tuesday by an ample portion of these younger voters, most of whom live in the state’s eastern cities and suburbs.

They are voters whom the Republican nominee, Glenn Youngkin, must attract to end his party’s drought at the statewide level.

The last Republican to win statewide was Bob McDonnell, elected governor in 2009 — along with Bill Bolling for lieutenant governor and Ken Cuccinelli for attorney general. McDonnell won in a landslide attributed to anger with President Barack Obama over the recession that had actually started under his GOP predecessor and to McDonnell’s detailed program for jump-starting the state’s economy and modernizing its government.

It is a shtick that led to lopsided gubernatorial victories by two other Republicans: George Allen in 1993, when no-parole became his mantra, and Jim Gilmore in 1997, who won on three words: no car tax.

Youngkin has offered few specifics on how he would lead Virginia, beyond vowing reforms in voting practices — a clear bow to false claims by former President Donald Trump that his loss to Democrat Joseph Biden is a consequence of election fraud.

This speaks to Youngkin’s dilemma: Demonstrating fealty to Trump to mobilize the shrinking, but disciplined, GOP base while simultaneously appealing to never-Trump Republicans and election-deciding independents.

As a distraction from Trump’s stain on Republicanism, Youngkin largely has stuck with a feel-good biographical approach, describing in personal appearances and a television commercial his ascent from teenage short-order cook to the head of an investment firm where he amassed millions cooking up deals.

In the hours immediately following the Democratic primary, Youngkin — loudly branded a Trump acolyte weeks ago by McAuliffe — apparently is banking that these voters can be won over by attacking McAuliffe with searing criticism hurled at him by Carroll Foy.

Youngkin is running an advertisement featuring video of Carroll Foy deriding McAuliffe as a do-nothing governor from 2014 to 2018. The ad could confirm doubts about McAuliffe among Carroll Foy’s target audience of younger minority voters, perhaps giving them an excuse in November to stay home.

Democrats did anything but Tuesday.

Their turnout is evidence the party, post-Trump, remains animated and engaged, though the vote total fell short by about 10% of the record set in 2017. That’s when — barely a year into the Trump era during which Democrats would take total control of Virginia — 543,858 went to the polls to nominate Ralph Northam, a moderate, for governor over liberal Tom Perriello.

Four years later, with 485,000-plus votes cast — that’s just behind the 493,108 tallied in 1977, when Democrats would suffer a third straight loss for governor — McAuliffe grabbed 301,000. That’s more than 10 times the number of votes cast in the Republican convention that nominated Youngkin.

And it’s a sign there’s still a lot of mileage left in the retread Virginia knows as Terry McAuliffe.

U.S. Sen. Mark Warner, D-Va., whiffed the last time he and other members of Virginia’s congressional delegation tried to include minor league …