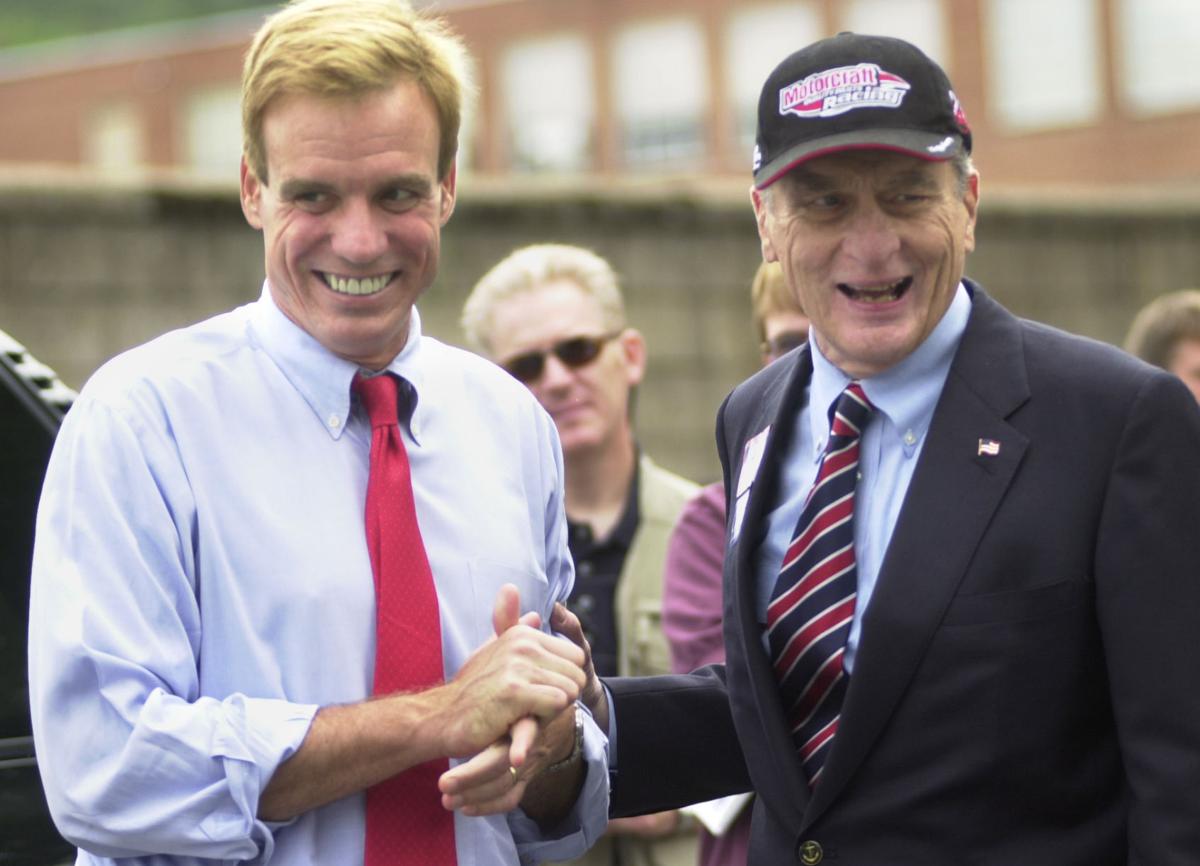 In 2002, Gov. Mark Warner (left) and U.S. Sen. John Warner, R-Va., spent a few moments together before the start of the Labor Day parade in Buena Vista. 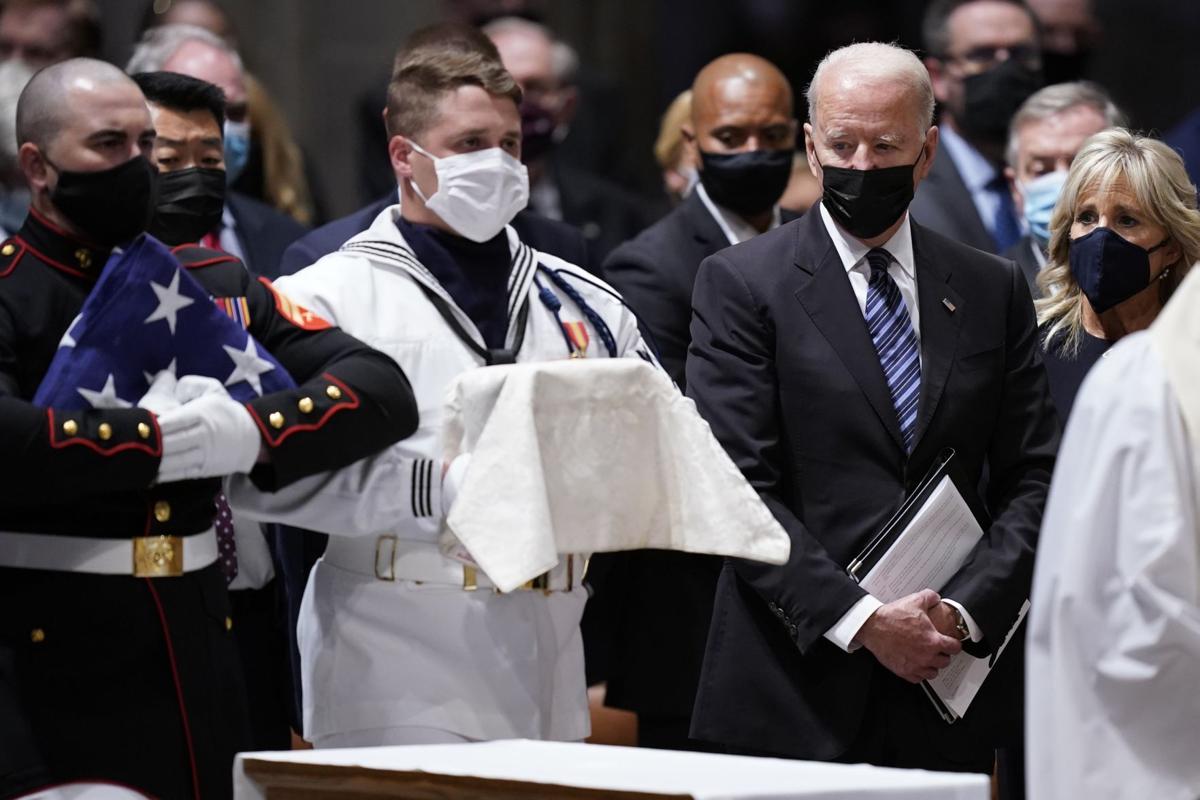 President Joe Biden and first lady Jill Biden watched as an urn with the cremated remains of former U .S. Sen. John Warner was carried into a funeral service at the Washington National Cathedral on Wednesday. 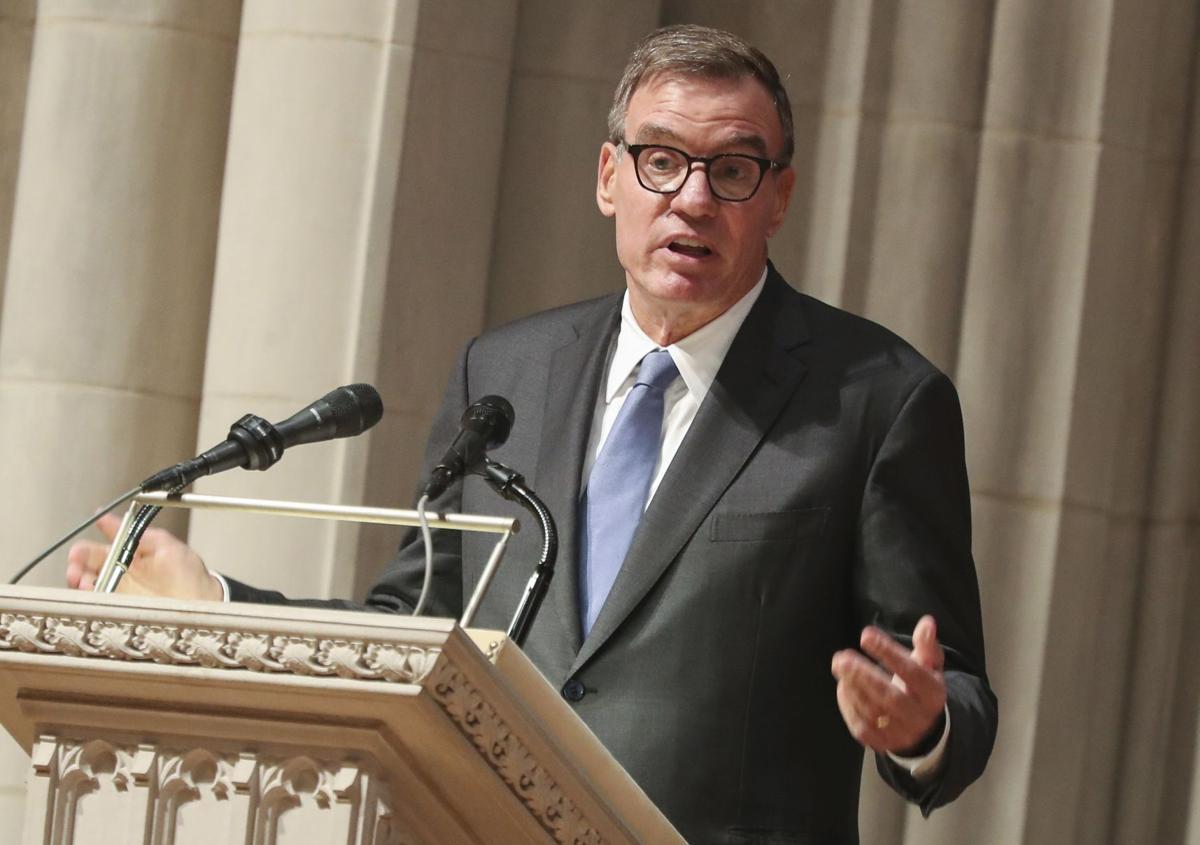 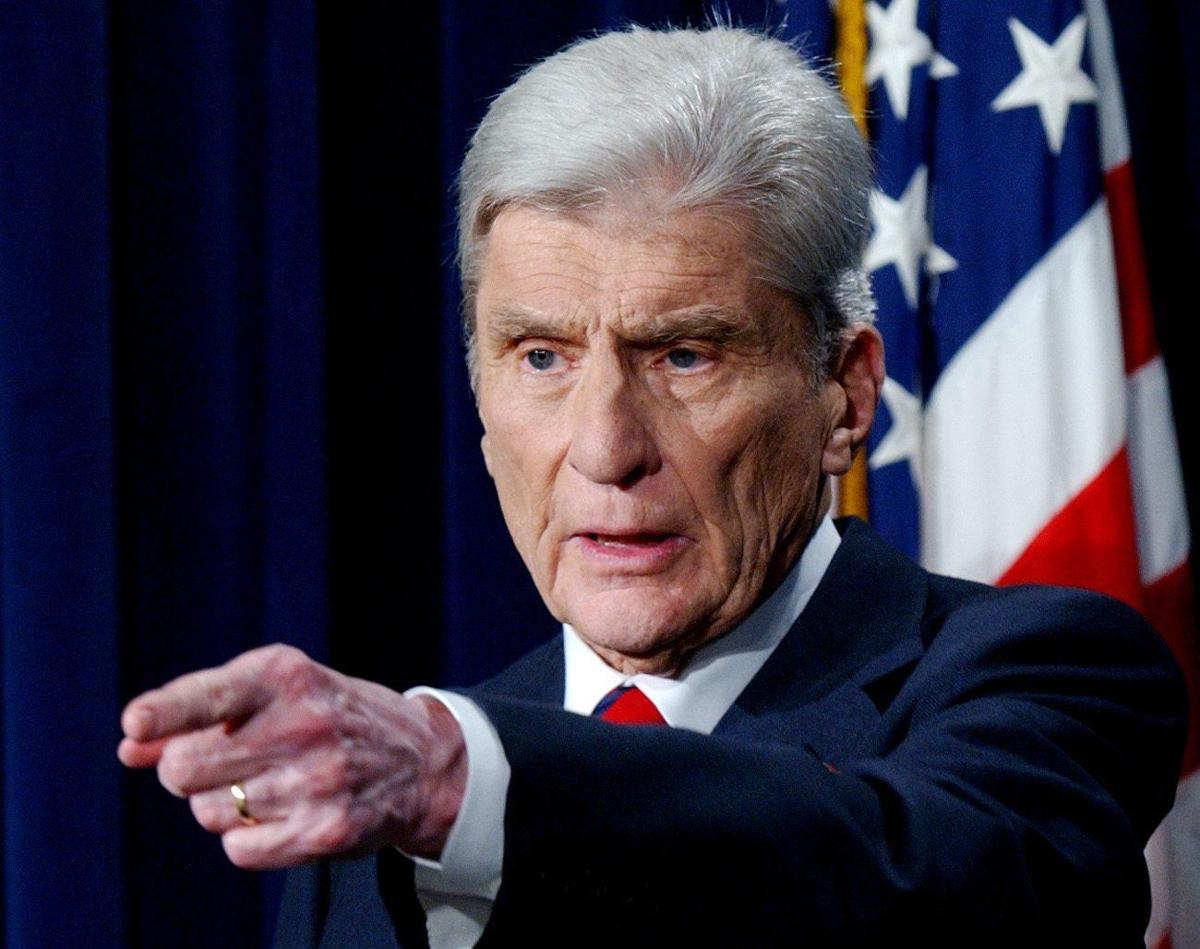 U.S. Sen. Mark Warner, D-Va., was not related to his Republican predecessor, John Warner, though the latter often referred to the former as his “country cousin.”

However, the two nurtured a bromance over nearly four decades, starting in the rough-and-tumble of Mark Warner’s 1996 challenge to John Warner. It was one in which rookie candidate Mark Warner came within 6 percentage points — tantalizingly close — to denying a fourth term to swaggering veteran John Warner.

Both Warners delighted in accomplishing things, and they recognized that demanded bipartisanship.

Mark Warner, as governor, won a promise-breaking $1.4 billion tax increase for cops, schools and the social safety net in 2004 with the support of John Warner, whose endorsement provided cover for moderate Republicans to break with the legislature’s tax-phobic GOP majority.

Mark Warner returned the favor 17 years later, proposing this past Thursday that the President Joseph Biden-blessed infrastructure bill on which the Virginian was a negotiator be named for John Warner — never mind the measure was suddenly imperiled at week’s end. It would be a sign that in these hyperpolarized times, the Senate still can do as John Warner did: work toward consensus.

Mark Warner’s tribute to John Warner — who died May 25 at 94 and at whose funeral Wednesday was eulogized as a model of bipartisanship by Biden, his Senate colleague of 30 years — is more than political theater.

Coming in the heat of a gubernatorial campaign that will decide the viability of the once-dominant GOP that relied on a center-right coalition of which John Warner was an emblem, Mark Warner’s proposal is an overture to voters who could prove decisive in the lower-turnout contest between Terry McAuliffe and Glenn Youngkin.

By, in effect, seizing John Warner’s legacy for the Democratic Party, Mark Warner is sending a signal to disaffected Republicans and Republican-leaning independents: that Virginia Democrats, the constant tug of the left, notwithstanding, are — as John Warner was — more practical than philosophical in outlook.

John Warner’s funeral underscored this defining feature of his style — a style that compelled him to occasionally, but always dramatically, break with his party, opposing Iran-Contra figure Ollie North for the Senate in 1994 and Donald Trump for the presidency in 2016 and 2020.

And the service, planned by John Warner’s family and staff, did so in a manner one would expect at a politician’s funeral and, perhaps, that of a mob boss: with loud and clear messages, spoken not with words but with actions.

Though elected Republicans attended — Mitch McConnell of Kentucky, the Senate minority leader, sat with the congressional leadership — none were among the eulogists. Those who spoke were Democrats: Biden, Mark Warner and the state’s junior senator, Tim Kaine — all of whom had been endorsed by John Warner for their current offices.

One could only imagine who John Warner would support for governor this year.

That he shuffled off this mortal coil estranged from a GOP that bears no resemblance to one in which he first was active in the 1950s for Dwight Eisenhower can only mean he would think long and hard before lending his name to those even faintly allied with Trump, among them, Youngkin, who’s selective about when and how he invokes The Donald.

Youngkin’s bio might intrigue Warner: ambitious suburban kid with a Harvard M.B.A. who made a fortune flipping companies. Warner, who made his money the old-fashioned way — through marriage — would also appreciate Youngkin’s pledge to keep defense-rich Virginia friendly to veterans. Few could match Warner as an advocate for the military.

And how could John Warner begrudge Youngkin spending, so far, $12 million of his own money on his candidacy? Warner saw that big money made a big difference in the Senate race with Mark Warner, a telecom multimillionaire who cut more than $10 million in checks to his campaign.

Mark Warner was far less generous when he stood for governor in 2001, instead building a network of donors that showed broad support for his candidacy. Still, Warner didn’t exactly scrimp that year.

As for McAuliffe, John Warner knew a lot of people like him — hard-charging come-heres who made a splash as campaign operatives and later got rich at the intersection of commerce and politics. Financial independence did for McAuliffe — for Youngkin and Mark Warner, too — what it did for John Warner: freed them to parachute into Virginia politics.

But McAuliffe has something Youngkin can’t match, and something that John Warner, as an institutionalist, would prize: experience in government. As a former governor running for his old job, McAuliffe mastered Richmond the hard way, by — as a newbie — having his head handed to him by a Republican-dominated General Assembly with one word in its vocabulary: no.

That the Virginia election could yield a divided result — the governorship falling to one party, the House of Delegates to the other — is a scenario that, given the Washington-like tribalism that now grips the state, would demand an effort at bipartisanship that might even overwhelm John Warner, who toyed with running for governor in 1993.

But that’s another story.

Virginia teachers could see a 10% raise over the next two years under a proposal by Gov. Ralph Northam.

In 2002, Gov. Mark Warner (left) and U.S. Sen. John Warner, R-Va., spent a few moments together before the start of the Labor Day parade in Buena Vista.

President Joe Biden and first lady Jill Biden watched as an urn with the cremated remains of former U .S. Sen. John Warner was carried into a funeral service at the Washington National Cathedral on Wednesday.