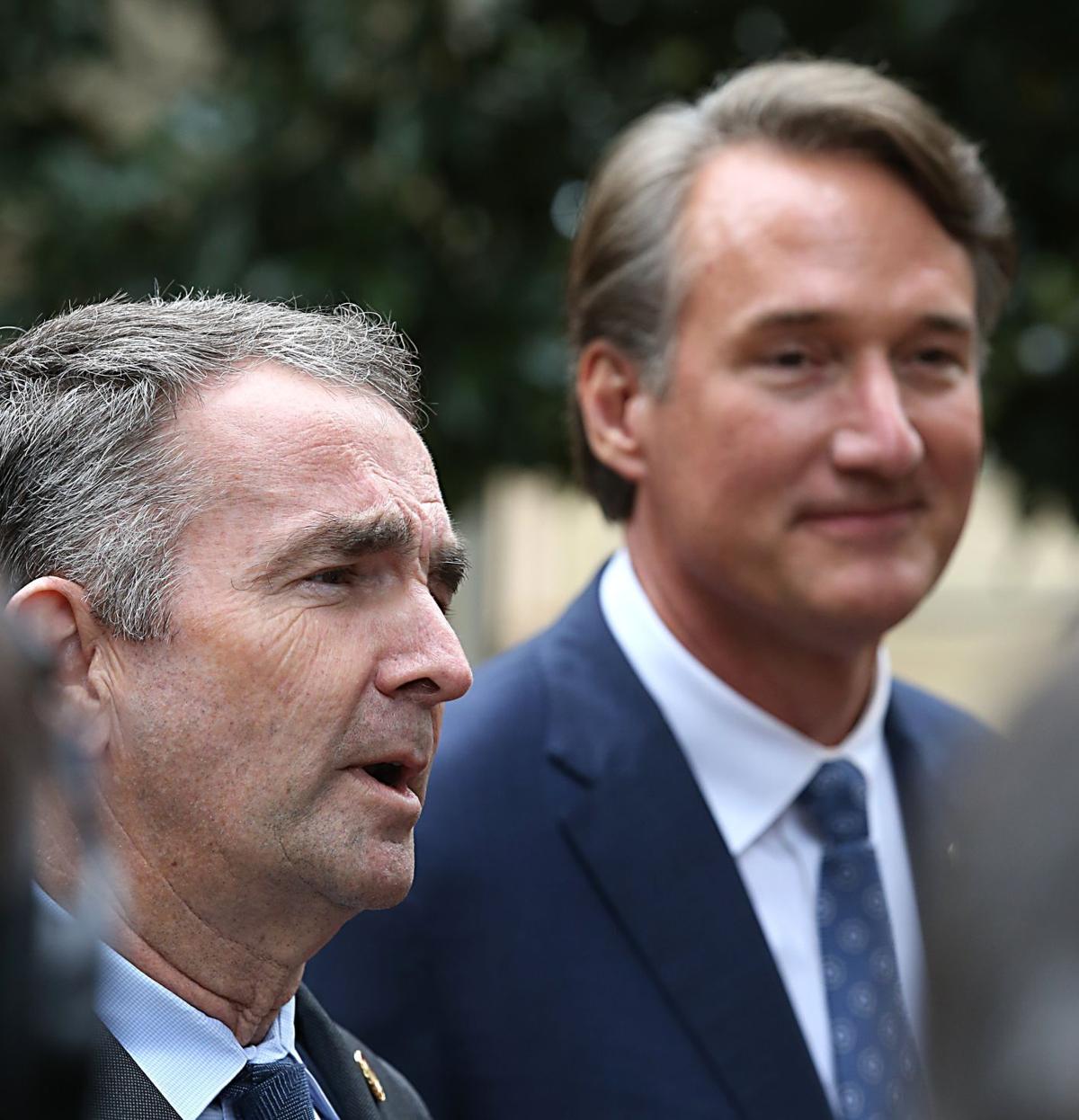 Gov. Ralph Northam (left), standing by Gov.-elect Glenn Youngkin, spoke to the media outside the Executive Mansion on Nov. 4.

On Tuesday, 32 days before surrendering the governorship to Republican Glenn Youngkin, Democrat Ralph Northam proposed his version of some of the tax goodies that helped Youngkin to a slender victory 42 days earlier over Terry McAuliffe: repeal of the state’s portion of the 2.5% sales tax on groceries and one-time rebates for individuals and couples.

Imitation as the highest form of flattery? To some degree, yes. Running for governor in 2017, Northam talked about doing away with the grocery tax. He never acted on it, even when it would have been easy — when his party controlled the legislature. Thus, Virginia remained among the 14 states that tax what you purchase at the supermarket.

Not that Northam and Democrats didn’t focus on helping low-income and working-class Virginians. With Republican votes and a ton of money from Washington, they provided health care for nearly 500,000 uninsured Virginians. This required expanding Medicaid, a federally financed, state-run program for the poor. Youngkin opposed the idea.

Northam’s tax scheme is definitely a reaction — an acknowledgment Democrats gave away an issue they could have owned. You can always count on Democrats, with their civics-book notion of government, to hand Republicans a way to win over voters by appealing to their heads, hearts and pocketbooks.

The bitingly glib incoming speaker of the House of Delegates, Republican Todd Gilbert of Shenandoah County, framed the Northam proposal this way: “Now we know what it takes to get Virginia Democrats to propose cutting taxes — losing to a Republican.”

Democrats weren’t against repeal of the grocery tax. Northam and McAuliffe said they wanted it considered as part of a larger objective: modernizing a tax system, elements of which date to the Colonial era. Even with the state expecting to be awash in an extra $13 billion over the next few years, Virginia, they said, had to be judicious about spending it.

This was the wrong thing to say. Detail-averse voters knew COVID-19-induced inflation was pinching them at the checkout counter. Also, they don’t care about the strings attached to public dollars. Voters know what the government spends originates in their pockets. And it would help, especially in uncertain times, if some of it stayed there.

Youngkin channeled these sentiments in his commercials and staged appearances, including those at grocery stores, where he’d cruise the aisles and work the register. It recalled clever ads run by Democrat Henry Howell in 1973, when he vowed repeal of the grocery tax by branding Republican Mills Godwin, architect of the sales tax, as “too taxing.”

For Republicans who note the prices of such essentials as bread have spiked during the pandemic, Northam’s offering is half a loaf. Youngkin’s press secretary, Macaulay Porter, said it was a “step in the right direction” but doesn’t “entirely fulfill Virginians’ mandate.”

Maybe Youngkin — to borrow Republican Sen. Mark Obenshain’s explanation for the Democrats’ drubbing last month — is too far out over his skis? When did a victory with 50.57% of the vote and a majority of 1.93%, qualify as a mandate?

Wonder what Northam and three Republican governors — George Allen, Jim Gilmore and Bob McDonnell — would say about that. All were elected in landslides that gave them overwhelming political muscle to promptly put in place, respectively, Medicaid expansion, parole abolition, the car-tax rollback and economic development initiatives.

Northam would erase the state portion of the grocery tax, 1.5%, while preserving the 1% collected by local government. That’s still a hit on localities, as Virginia’s share is returned to them as education aid. It’s driven by student population, with suburban schools — where COVID is blamed for enrollment declines — receiving the most.

Northam would replace those funds — $106 million in what’s left of the first year after the tax is eliminated Jan. 1, 2023, and $262 million in the second — with cash presumably from the record surplus. No matter the final form of tax relief, what legislators provide in makeup dollars in 2022 could be pulled back in out years because of the inevitable economic decline.

If only in a faintly bipartisan way, Northam’s hand-off to Youngkin on cutting the grocery tax conjures an earlier transition in which tax relief was the centerpiece and the accompanying pricey details were played down for a celebratory reason: that Republican was succeeding a Republican.

Allen’s final budget in late 1997, fatted with cash from a strong economy, included a down payment on Gilmore’s program for ending the locally imposed tax on personal motor vehicles. Soon after Gilmore took office, it was clear that junking the car tax was far more expensive than he said as a candidate.

Not only is the tax still collected, it has increased in some localities and the state spends nearly $1 billion a year compensating cities and counties for reducing the levy. These are nagging details — mentioned previously in this space — that suggest the Northam and Youngkin tax cuts are easier said than done.

But they will be done. Whether the politicians consider the associated complexities is another matter.

Adding to all this: A steep learning curve, not just for Youngkin, a newcomer to government, but for a vast swath of the General Assembly. Including the 12 Republicans and five Democrats newly elected in November, nearly half of the House’s 100 members — 49 — have served four years or less, according to the Virginia Public Access Project.

For Youngkin and his Republicans, Day 1 will be the first of many long ones.

Gov. Ralph Northam (left), standing by Gov.-elect Glenn Youngkin, spoke to the media outside the Executive Mansion on Nov. 4.