Schapiro: Of different eras, of the same origins, of similar goals
0 Comments
Share this
1 of 2 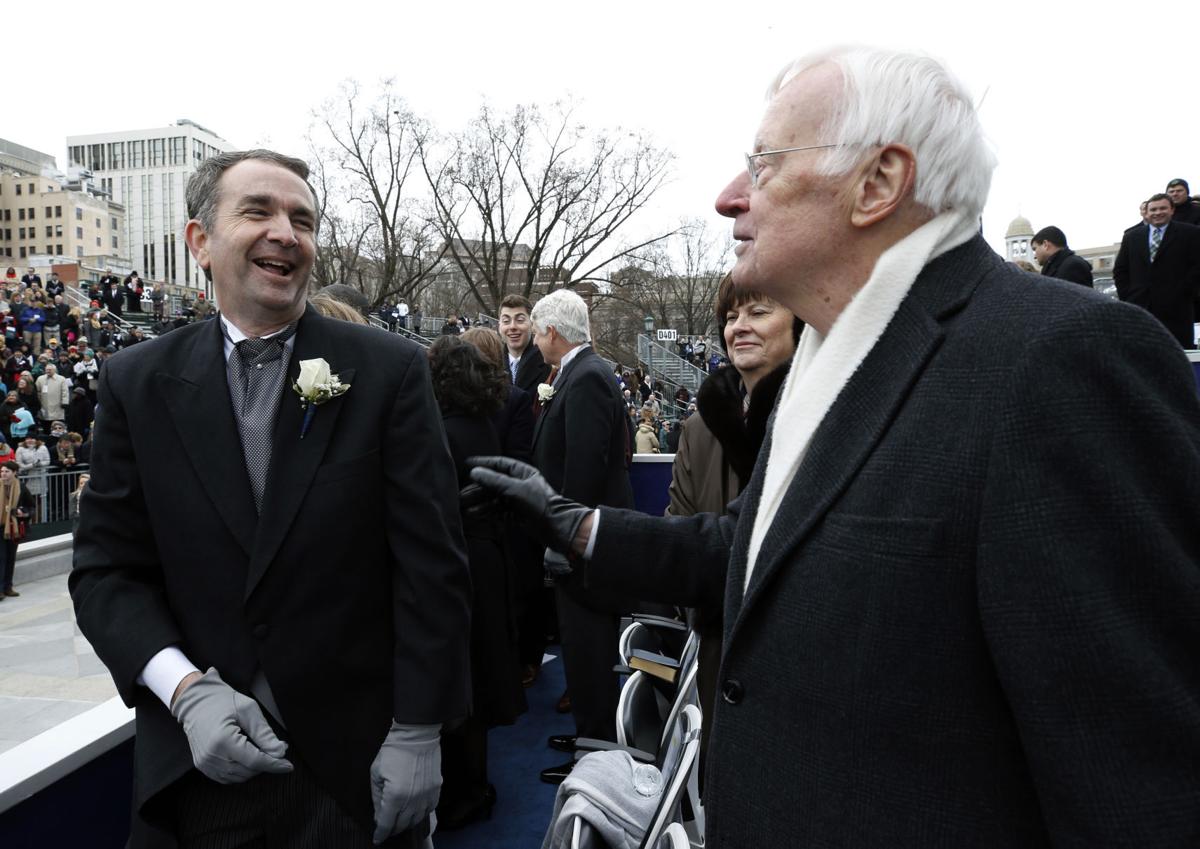 For Jerry Baliles and Ralph Northam, politics began at the water’s edge.

Baliles, from the hills of far Southside, and Northam, from the marshlands of the remote Eastern Shore, shared a love for the Chesapeake Bay, the natural wonder and economic engine where Virginia’s complex history began more than 400 years ago.

Baliles discovered it as a young lawyer in the attorney general’s office. Northam was born to it as the scion of a family long anchored on the shore.

As governors — Baliles, from 1986 until 1990; Northam, from 2018 until next January — they committed capital, personal and pecuniary, to the restoration and protection of the bay. The “enormous protein factory,” as H.L. Mencken called it, the bay was nearly choked to death by toxic runoff from upstream cities and suburbs and overfishing by floating factories.

That two Democrats — of different eras, shared rural origins and similar agendas — are bound to the bay is more than a coincidence, more than a reminder that protecting the water, air and land is an article of faith within their restive party, one that struggles to strike a balance between environmentalism and capitalism.

Any doubt that Baliles and Northam were of like mind on the bay would have been dashed this past Wednesday at the dedication on the Northern Neck of an environmental education and research center by Longwood University and named for Baliles, who died in 2019. Northam spoke at the ceremony, describing his predecessor as a mentor.

The parallels between these politicians are intriguing.

Baliles and Northam — products of the Republican-trending countryside who harnessed the political power of the Democratic-leaning suburbs — were elected by overwhelming margins. That didn’t mean voters were expecting to be overwhelmed when these guys took office.

This had much to do with their style. Both were practical, low-key, droll, devout believers in civility and consensus, and, as a consequence, more listeners than talkers. That they succeeded high-watt personalities — Baliles followed presidential son-in-law Chuck Robb; Northam, the over-caffeinated showman Terry McAuliffe — made for lower expectations.

Which only made for greater success.

Baliles, in effect, squeezed five years out of his nonrenewable four-year term, calling the legislature into special session to enact promise-breaking tax increases for roads, harbors and airports. As an investment in transportation, it went unmatched until 2013, when a Republican governor, Bob McDonnell, would break his no-new-taxes vow to bankroll highways and transit.

His was a thematic approach, with a different but complementary issue emphasized each year. With Virginia’s links to the outside world improving, Baliles enhanced trade ties. He frequently traveled overseas, talking up the state to foreign nations and foreign businesses. It wasn’t always bump-free. Baliles’ overtures to Israel irritated Arab Americans.

And then there was the Chesapeake Bay.

Baliles, in the early 1970s one of the first state lawyers to handle environmental matters, won restrictions on zoning and disposal of farm waste, both threats to the bay. That the legislature was ruled by fellow Democrats was an advantage on most Baliles initiatives, but environmental regulation was a heavy lift for a party that fancied itself business-friendly.

Northam’s term has been similarly consequential.

The Democrats’ near-takeback of the House of Delegates in 2017, attributed to the anti-Trump landslide that swept in Northam, would bring Republicans to heel the following year on Medicaid expansion, which they had resisted during McAuliffe’s term.

Northam also took the first steps toward criminal justice reform, securing an increase in the dollar threshold for a felony. But this was a baby step compared to what lay ahead.

The blackface calamity of 2019 that might have driven Northam from office — he refused near-universal demands he resign — instead strengthened him, contributing to a reckoning on race not just for him but the political class. It would accelerate the following year with the death of George Floyd.

But Northam’s up-front approach to discomfiting questions on race ultimately made him a plus for Democrats, who would restore their General Assembly majority nine months after the governor’s embarrassment.

In 2020 and 2021, Northam would achieve victories that had seemed unimaginable in Virginia: the liberalization of voting laws, largely demanded by the challenge of staging elections during a pandemic; new restrictions on firearms, a response to the mass shooting in Virginia Beach; legalization of the recreational use of marijuana; local authority to raze Confederate monuments; and — this would please Baliles — new taxes for a giant road-and-rail program.

As politicians, Baliles and Northam were more interested in governing than campaigning, though both understood the former was not possible without the latter.

They also preferred to shape events, but recognized events could shape them. Baliles was frustrated during his final months as governor, when the best he could do was react to matters over which he had little or no control: an approaching recession and a miners’ strike in Southwest Virginia.

With no interest in elective office beyond the governorship, both threw themselves into their jobs. Both earned their retirements and, Cincinnatus-like, planned to return to the fields they plowed before politics. For Baliles, it was, for a while, law. For Northam, it’s medicine.

And Baliles resumed — as Northam says he will — a special pleasure: fishing.

Because politics stops at the water’s edge.