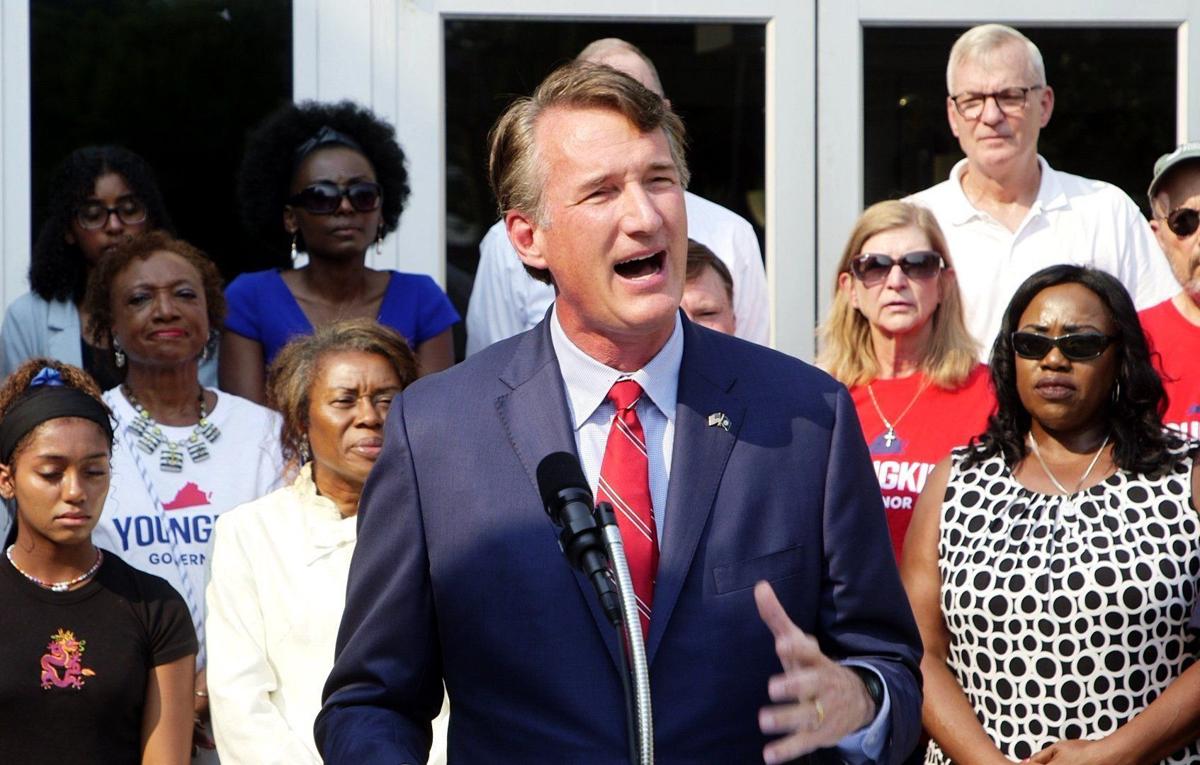 A VCU poll of 823 adults found that 37% of likely voters would choose Glenn Youngkin, the GOP gubernatorial nominee.

It’s easy for a rich guy from one of the wealthiest ZIP codes in Virginia — and who knows all sorts of ways to shrink his tax bill — to talk tough about cutting everyone else’s taxes.

But kudos to Glenn Youngkin, the Republican nominee for governor from the Great Falls gold coast of Northern Virginia. A former investment executive with a net worth of more than $300 million, Youngkin has come up with a way to underscore his everyman credentials, other than his ads about how basketball got to him college and beyond.

In what’s supposed to be a slam dunk for a campaign that’s missed a few free throws, Youngkin wants Virginia to return to taxpayers $1.5 billion of an anticipated $2.6 billion surplus attributed to the initial economic bounce back from COVID-19. He’s also proposing a 12-month moratorium on a new sales tax on gasoline.

Youngkin, who — as Patrick Wilson reported in the Richmond Times-Dispatch on July 21 — got from Fairfax County a 95% reduction in taxes on his horse farm under a law to preserve open space, still hasn’t explained how he would eliminate the state income tax altogether, an idea to which he alluded for months.

Perhaps his economic guru, anti-taxer Stephen Moore, is massaging the numbers on that. This is the same fella whose nomination to the Federal Reserve Board of Governors in 2019 was yanked by President Donald Trump after reports on Moore’s seemingly misogynistic writings about women.

There aren’t many people who enjoy paying taxes. Only few know that Virginians don’t pay a lot.

That information gap is exploited by politicians, including Youngkin. He faces an information gap of his own, demonstrating with other proposals that he knows little about government. Witness a pledge to ban by gubernatorial decree the teaching of critical race theory in public schools, never mind that’s ultimately a legislative call.

The investigative arm of the General Assembly, the Joint Legislative Audit and Review Commission, has for years produced an annual snapshot of where Virginia stands among the 50 states on taxes and spending. Based on public studies, the JLARC compendium should be a source of comfort for Democrats and Republicans.

Among its findings: Virginia is 30th per capita in state taxes and 17th in local taxes, in part a reflection of Northern Virginia’s abundance of highly paid people living in high-priced houses and driving high-priced automobiles. As a resident of the D.C. suburbs, Youngkin should know that. Ditto his Democratic opponent, Terry McAuliffe, who lives in pricey McLean.

Virginia ranks 38th when state and local taxes, as a percentage of personal income, are combined. It’s 8.6%, down slightly since 2015. Among our neighbors, Maryland is 12th at 10.4%, North Carolina, 34th, at 8.8% and Tennessee, 50th, at 7%. Tennessee’s income tax applies only to interest and dividends.

The conservative Tax Foundation has found that, as of 2019, Virginia was smack dab in the middle in state-local tax burden. At 10%, Virginia was 24th — not too high to drive off people, not too low to choke off services. Maryland was sixth; North Carolina, 32nd; Tennessee, 48th.

That Virginia is a wealthy state — 12th in income per capita — does not conceal its parsimony. Virginia is 37th in Medicaid spending; 47th in the percentage of state spending for public assistance. These figures are easily overlooked, if mentioned at all, by candidates wooing election-deciding suburbanites through their pocketbooks.

Hostility to taxes is an article of faith among Republicans. To betray that can be fatal. Virginia is littered with former and soon-to-be former GOP elective officials whose ambitions for renomination or higher office were thwarted by activists wedded to three words: No new taxes.

Kirk Cox, the former House speaker with more than three decades in the General Assembly, was the most experienced candidate for the Republican nomination for governor this year. But helping a Republican governor, Bob McDonnell, enact in 2013 a promise-breaking tax increase for roads and rail was nonnegotiable with the grass roots.

It wasn’t always that way.

John Dalton, a center-right Republican who was governor from 1978 to 1982, cut a deal with Democrats who controlled the legislature to raise the fuel tax. Dalton was privately horrified his protege, Marshall Coleman, ran for governor in 1982 pledging to veto any tax hike. He lost by 100,000 votes.

But as the national party subordinated itself to anti-taxers, so, too, did the state party.

George Allen, governor from 1994 to 1998, used a Democrat-defeated proposal to cut the income tax to slightly increase Republican numbers in the legislature in 1995. His successor, fellow Republican Jim Gilmore, was elected in a landslide, promising to junk the car tax.

It still exists, though a clunky scheme enacted in 1998 to ease the hit on the local governments that collect the tax costs the state nearly $1 billion a year and contributed to a yawning shortfall four years later that spurred a Democratic governor, Mark Warner, to violate his vow to not raise taxes.

But for Warner, having outmaneuvered a Republican legislature, there was an unanticipated benefit.

He suddenly found himself being talked about for president.

A VCU poll of 823 adults found that 37% of likely voters would choose Glenn Youngkin, the GOP gubernatorial nominee.