Schapiro: Some Black candidates narrowcasting for votes
0 comments
Share this
1 of 2 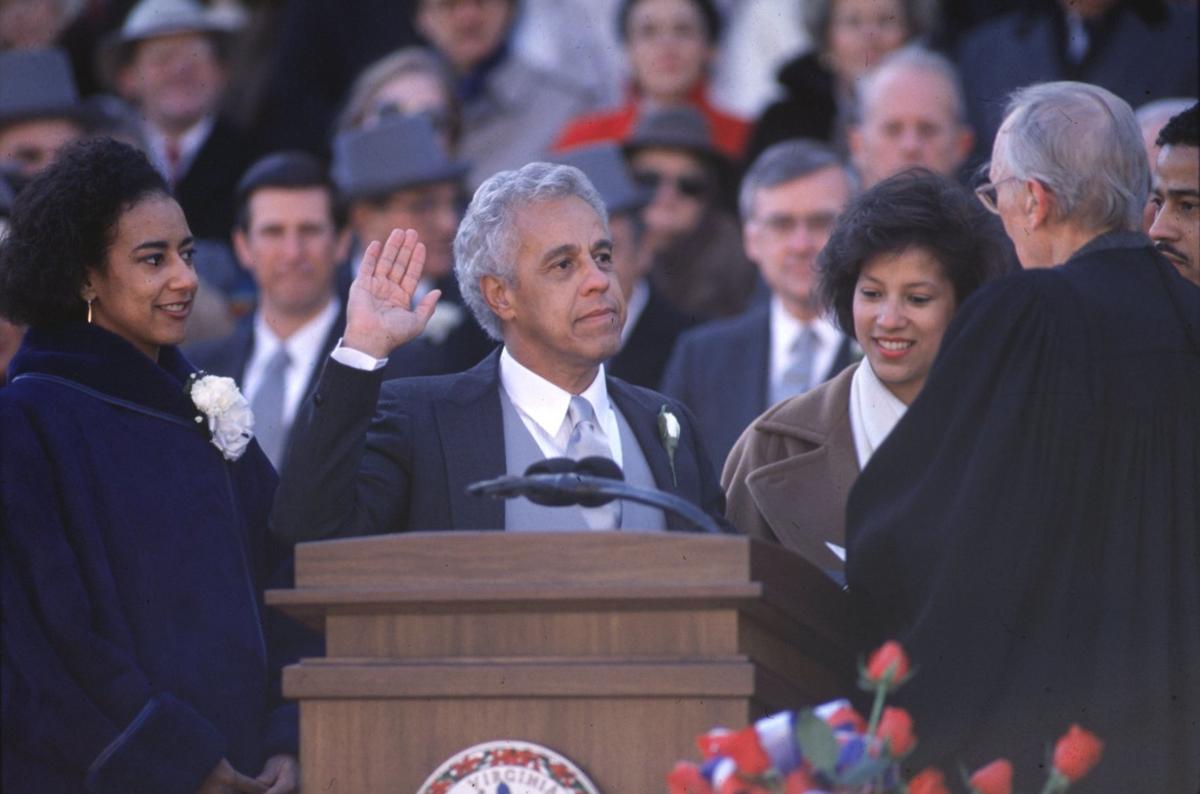 L. Douglas Wilder, who took the oath of office in January 1990, was the nation’s first elective Black governor.

What worked for Doug Wilder apparently doesn’t work for other Black Democrats who want to do what he did: Make history.

When Wilder razed a long-standing racial barrier, winning for lieutenant governor in 1985 to become the first Black man elected statewide in Virginia, and four years later on his victory as the nation’s first elective Black governor, he would tell those curious about his feats that he was not a Black politician. Rather, he was a politician who happened to be Black.

Nearly four decades ago, running in a Virginia that was not quite the multihued, suburban-dominated dynamo it now is, Wilder was mindful of the old habits of this former cornerstone of the Confederacy.

One way he navigated them was to emphasize an indisputable truth: Wilder, despite what his skin color signaled to some, was an Establishment figure.

Nearly 20 years in the Virginia Senate and a storied reputation as a Richmond lawyer said as much. His independent streak, notwithstanding, he was part of a continuum of can-do Democrats. He would acknowledge the symbolism of his candidacy and — confident he had the Black vote — rarely strayed from the substantive ideas that resonated with a range of voters, including fiscal discipline and abortion rights.

Wilder was not a Black politician. He was a politician — a wickedly skilled one — who happened to be Black.

The instincts of the candidates and the poll-driven impulses of their consultants suggest this is the logical course in an era of elevated racial, cultural and gender sensitivities that — paired with the makeover of Virginia as home to more come-heres than from-heres — are accelerating the nationalization of state politics.

It is not, however, generating traction for the three Black candidates seeking the Democratic nomination for governor: former Del. Jennifer Carroll Foy of Prince William, state Sen. Jennifer McClellan of Richmond and Lt. Gov. Justin Fairfax.

Wider latitude for Wilder reflected a luxury they don’t have. They face a crowded primary field while Wilder’s biggest opponents for the nominations were naysayers who insisted Virginia was not ready to elect a Black candidate statewide.

Indeed, the front-runner for the 2021 nomination — bolstered by a hefty share of female voters, Black and white, who dominate the Democratic primary — is a white male retread: Terry McAuliffe, a governor from 2014 to 2018 who so enjoyed the job, he is running for it again.

Because of the only-in-Virginia ban on governors seeking consecutive terms, McAuliffe has spent the past four years plotting his second act.

He is running as someone voters know well. His campaign bumf emphasizes the familiar, invoking his first name. It’s “Terry for Virginia.” He is running to get things done: more money for schools, expanded racial equity, improved health care, a clean environment, a Virginia that welcomes diversity.

Hobbled by a Republican legislature the first go-around, McAuliffe says the sky’s the limit if Democrats retain the House of Delegates, which is up for election this fall, and the state Senate, next decided in 2023.

It’s not that McAuliffe’s opponents are not talking about what they would do. It’s that their ambitions and accomplishments often deliberately are framed by symbolism.

That Carroll Foy, recalling the food-or-medicine dilemma her family once faced, emphasizes the racial dimension of access to health care and McClellan spotlights her legislation protecting domestic workers, many of whom are people of color, complements a theme both often invoke: They are running to become the nation’s first Black female governor.

There is no doubt achieving such a first again would declare Virginia in the vanguard of the demographic change remaking the nation and its politics. But in underscoring the historic character of their candidacies, Carroll Foy and McClellan perhaps risk casting their campaigns in terms of “me” rather than “we.”

Fairfax, the second Black man behind Wilder to achieve statewide office here, also has personalized his candidacy but in an alarming way. In the first Democratic gubernatorial debate, Fairfax said that, because of the allegations of sexual assault that have dogged him since 2019, his opponents treat him like Emmett Till and George Floyd.

Much of this is rooted in the arithmetic of a Democratic primary. Carroll Foy, McClellan and Fairfax want to attract what they presume to be a natural constituency — Black Virginians — and entice younger, woke voters who look beyond race. Seems tricky, given that Democratic statewide primaries draw large numbers of older voters.

The fifth candidate, Del. Lee Carter of Manassas, does not have these problems. A socialist, Carter comfortably raises uncomfortable issues.

He has complained that the Democratic legislature wrongly has prostrated itself to the departing Democratic governor, Ralph Northam, and that by failing to use its power as a check on the executive, the General Assembly is neglecting the source of its authority: the people.

L. Douglas Wilder, who took the oath of office in January 1990, was the nation’s first elective Black governor.