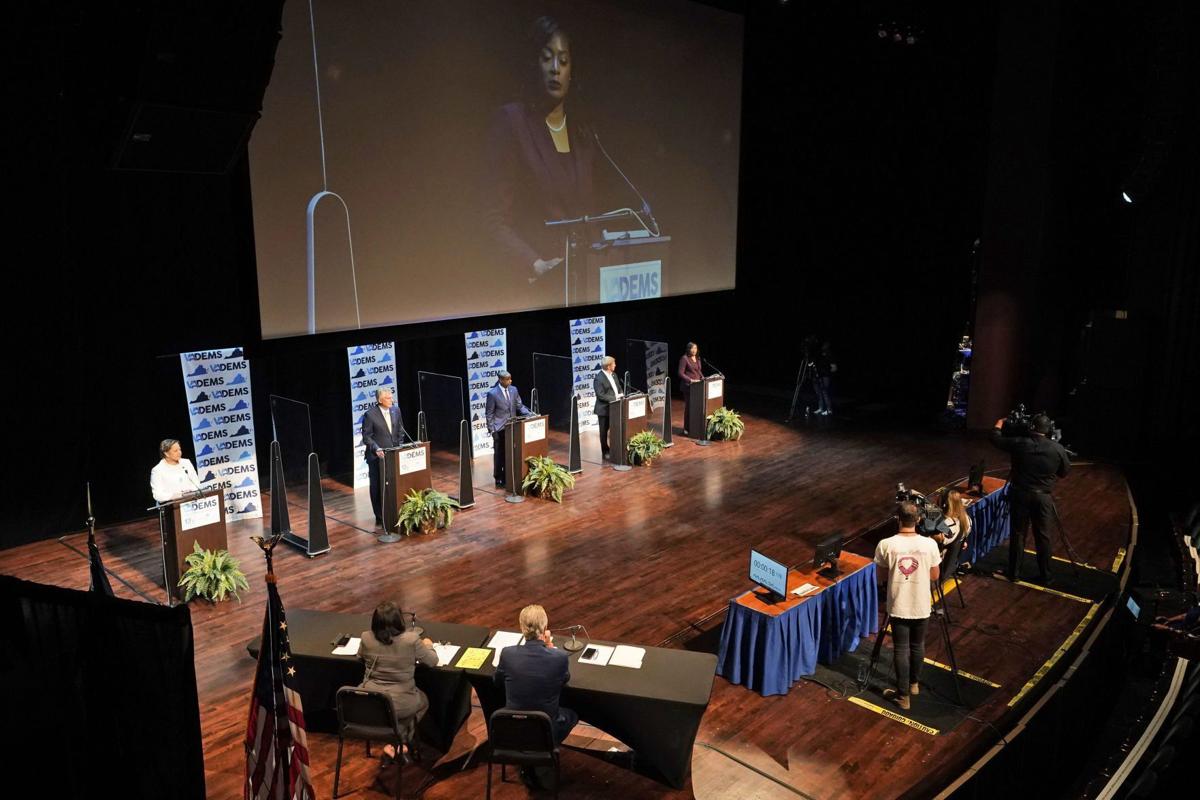 Democratic gubernatorial candidates shared the stage June 1 during the last debate before Tuesday’s primary. The winner will face Republican Glenn Youngkin in the November election.

The Democratic primary Tuesday is a smorgasbord, with candidates for every taste: Young and middle-aged; liberal and centrist; of color and Caucasian; suburban, urban, rural.

Seeking nominations for governor, lieutenant governor and attorney general, the candidates are working from different menus shaped by the same activities: mobilizing voters, reaching to regions beyond their own and raising money for messaging.

But the gubernatorial contest, despite an array of newer candidates, is unfolding as, in effect, a test of incumbency.

Former Gov. Terry McAuliffe, seeking a second nonconsecutive term after standing down four years ago because of the only-in-Virginia bar on governors running for re-election, is the de facto incumbent.

Of five candidates, he is the front-runner — well known, supremely financed. That makes it easier to break through the campaign cacophony.

This elevates expectations for McAuliffe.

McAuliffe must demonstrate that, as a retread, he can still engender excitement among Democrats. That could be put to rest if he tops 50%. Public polling has him at 40%-plus.

A big win — and big turnout — could convey that, post-Donald Trump, Democrats are jazzed to extend their gubernatorial win streak to three. Turnout — in the era of COVID-19 — is a guessing game. Few believe it will match the 540,000 votes cast in the 2017 gubernatorial primary.

Early voting, as a yardstick, is apples, oranges and pears. It’s higher than it was in 2017, but lags 2020. Presidential balloting pushed early turnout to high levels, aided by an easing of restrictions still in place four years ago.

A robust turnout could be a harbinger for the battle with Republicans, whose May convention drew a sliver of voters — 30,000 — though more than 50,000 were expected.

Republicans, however, are enthusiastic, picking for governor Glenn Youngkin, a blank-slate newcomer whose wealth as a private-equity investor suggests he can outspend McAuliffe. That’s something to which The Macker is unaccustomed.

Youngkin, a Northern Virginian with roots in suburban Richmond and Virginia Beach, is paired for lieutenant governor with Winsome Sears, a Black former legislator from Norfolk who now lives in Winchester, and a Cuban American delegate for attorney general, Jason Miyares of Virginia Beach.

It wouldn’t be a Virginia primary without a bow to history.

The five Democratic candidates represent the largest number to run for governor — in either party — since 1949. That’s when four entered the Democratic primary in a post-World War II brawl that was a menacing but unsuccessful challenge to the state’s segregationist maximum leader, U.S. Sen. Harry F. Byrd Sr.

At issue then: Would Virginia, in the aftermath of a global war on totalitarianism, embrace the pluralism for which the nation sacrificed blood and treasure? There is an echo of that in the 2021 primary, unfolding amid racial sensitivities elevated by the deaths, at the hands of police, of innocent Black men and women.

The total number of minority Democratic candidates is a stunning eight.

Running for lieutenant governor, Del. Sam Rasoul of Roanoke would be the first Muslim elected statewide in the South.

All of this is a measure of Virginia’s accelerating diversity and the muscle of its growing nonwhite vote.

Watch for that Tuesday.

In heavily Black cities — among them, Richmond — voters hear nonstop vows of racial equity from Fairfax, McClellan and Carroll Foy. That they are younger candidates — the eldest is 48 — lends a generational dimension to their message.

It is a contrast with McAuliffe.

At 64, he is a wealthy, white baby boomer from Fairfax — a national Democratic personality before pivoting to state politics in 2009. His center-left views, blending economic boosterism with racial and gender fairness, resonate in blue cities and blueing suburbs.

McAuliffe is a favorite of many in the Black elective class, emphasizing policies that target the grassroots: jobs, health care and voting rights.

That could aid McAuliffe in territory that should logically fall to opponents. For example, Richmond, represented by McClellan for 16 years, has a McAuliffe protégé as mayor. Levar Stoney is all in with McAuliffe because of his own statewide ambitions.

Keep an eye, too, on Northern Virginia.

Though McClellan and Carroll Foy have shown strength there, winning straw polls in Arlington, Fairfax and Loudoun, suburban Washington is McAuliffe’s home. It is where — because of high incomes and high education rates — Democrats can be more practical than aspirational.

This means they can be predisposed to moderate politics, the McAuliffe leitmotif.

Will downstate Virginia be predisposed to a Democratic ticket of only Northern Virginians?

A surge for Ayala, one of four lieutenant governor candidates from Northern Virginia, after her endorsement by departing Gov. Ralph Northam raises the possibility all three Democratic nominees will be from greater D.C. Herring, whose incumbency increases the likelihood he’ll be renominated, previously was a Loudoun state senator and supervisor.

A NoVa trifecta diminishes RoVa, the Rest of Virginia.

It’s a talking point for Rasoul, the Mountain-Valley Democrat who leads in fundraising and polling, and city council member Andria McClellan of Norfolk, the only lieutenant governor prospect from Hampton Roads.

And it’s a chance for Republicans to argue that, at least geographically, their ticket looks like Virginia.

Democratic gubernatorial candidates shared the stage June 1 during the last debate before Tuesday’s primary. The winner will face Republican Glenn Youngkin in the November election.