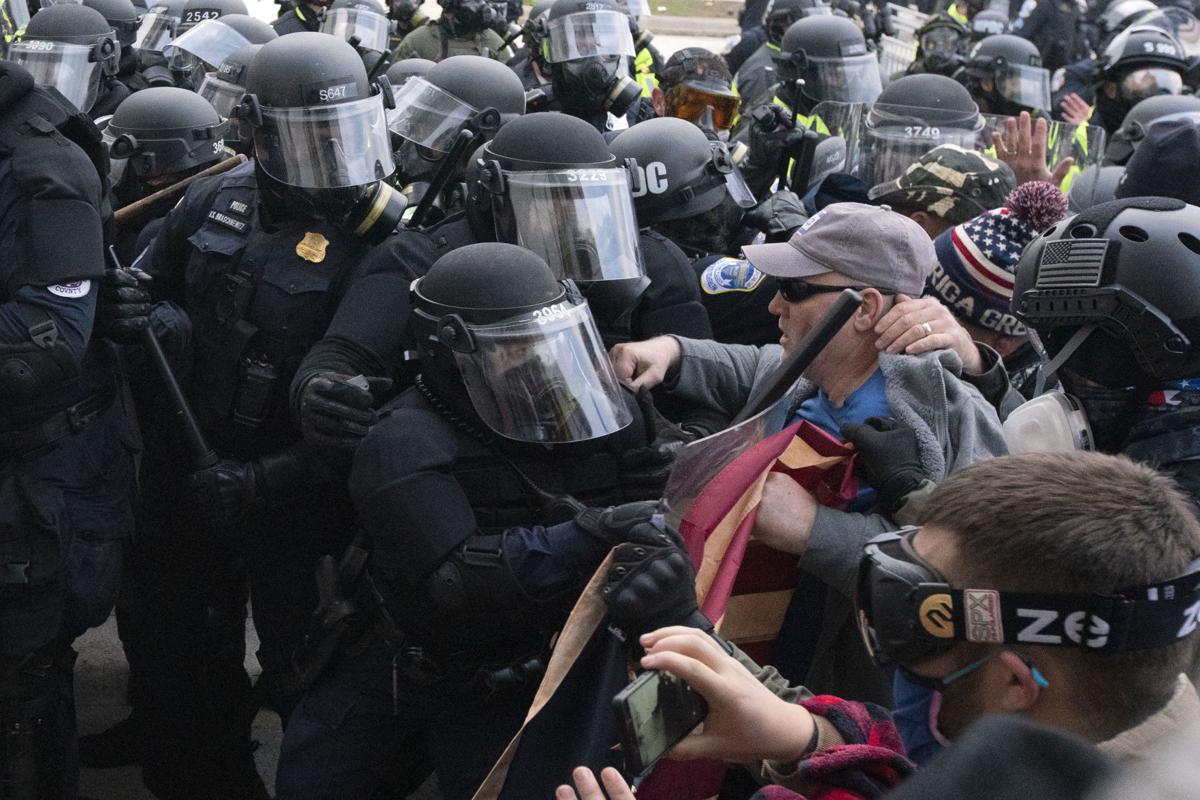 Capitol police officers in riot gear pushed back rioters as they tried to break down a door of the U.S. Capitol on Wednesday.

This past Wednesday, nearly 45 Republican legislative aides connected via Zoom to discuss the General Assembly session that opens this Wednesday. Because of the pandemic, the staffers met as most lawmakers will — remotely.

The aides talked about the bills their delegates and senators were proposing, the uncertain calendar for the session because of a partisan hissing match over its length and the two topics that have preoccupied the political class: legislative and congressional redistricting and the statewide and House elections.

The virtual get-together barely was underway when it was disrupted by reality — in the form of unreality.

Aides simultaneously watching television coverage of Congress’ ratification of Joe Biden’s victory for the presidency began rocketing texts about reports that followers of President Donald Trump were storming the U.S. Capitol in what would become a deadly insurrection.

It was one in which Virginia Republicans participated, if only indirectly.

The four Republicans in the congressional delegation supported Trump’s attempt to overturn the election by challenging results from Biden-carried states. The party’s state chairman, two of its candidates for governor and legislative leaders condemned the blaze of violence but not the individual who lit the match: Trump.

It goes without saying that Virginia Republicans, with their God-forbid-we-offend-the-base response to the mayhem, are surrendering one of the issues, they believe, that might lift them back to power: law and order. Post-George Floyd unrest, principally in deep-blue Richmond, told the story better than Republicans ever could.

Such parsing by Republicans is not new.

After the 2017 white nationalist riot in Charlottesville in which a counterprotester was killed, Republicans lamented the episode but doubled down on issues synonymous with the fringe voters on whom they depend and who flooded that college town: protecting Confederate symbols and gun rights.

Kirk Cox, the former House speaker and an Establishment candidate for the gubernatorial nomination, has a long record as a thoughtful conservative, despite two significant perceived betrayals of party orthodoxy: In 2013, he backed a tax increase for transportation and, five years later, Medicaid expansion.

His ambitions demand he affect a faux persona inconsistent with his actual image as the attentive teacher in whose high school government class kids in Chesterfield County, a now-swing Richmond suburb once reliably red, got their start in politics — Republican and Democratic.

Cox’s written statement on Wednesday’s events reflect this conflict — that he does not want to alienate the Trump loyalists who dominate the nominating process nor strand himself on the far right for the general election decided by centrist independents.

Cox called on Trump to call off his Capitol-crashing cabal, but ducked anything that might be construed as criticism of the president. Among Cox’s tougher lines was one that had a clear racial dimension: “Anyone who rightly spoke out against lawlessness and violence last summer cannot with integrity be silent now.”

The other announced candidate for the GOP nomination, Amanda Chase, continued her campaign from the parallel universe that is Trump Republicanism. She traveled to D.C. for the pre-assault protest and blasted out to her 100,000-plus Facebook followers that the tumult was the work of left-wing extremists.

By week’s end, Chase’s Facebook account — as a Twitter-stripped Trump’s was — temporarily had been suspended as a platform for conspiratorial untruths, forcing the pistol-packing Chesterfield senator, now facing demands for her expulsion, to communicate via a personal page that has fewer than 400 followers.

Republicans wanted to believe that, with Trump taking his leave and Democrats taking over the federal government, it was a matter of time before voters would be rattled by Democratic overreach and reflexively turn to the GOP. That was before this latest Trumpian ignominy — one that seems to link the party with sedition.

The adverse trickle-down effect on Virginia Republicans is well documented: Since Trump’s election in 2016, Democrats have been on the march. There was the statewide sweep in 2017, pickups in 2018 for Congress and in 2019, the take-back of the General Assembly.

With a population dominated by nonnatives and concentrated in metropolitan areas, it increasingly has become difficult for both parties to separate state and national politics. This trend has accelerated over the past decade, reaching a frenzy in the Trump years.

In 2014, Ben Chafin, a coalfield Republican who became the first Virginia lawmaker to die of COVID-19, tipped the state Senate to the GOP in a low-turnout summertime election by running against something over which the state had no control: Obama fossil-fuel restrictions.

Anything to stir up the masses.

Being a Virginia Republican or a Virginia Democrat could have special meaning — that one stood apart by standing for progress, even if it is was unpopular and required the incrementalism that shapes public policy.

In the 1950s, as Virginia — then controlled by conservative Democrats — defied the U.S. Supreme Court and closed public schools rather than desegregate them, a twice-unsuccessful GOP candidate for governor counseled calm, urging baby steps in the great leap toward classrooms shared by white and Black students.

He was a Southwest Virginian named for a forward-thinking Republican president from the Gilded Age: Theodore Roosevelt Dalton.

But everyone knew him as “Ted.”

Capitol police officers in riot gear pushed back rioters as they tried to break down a door of the U.S. Capitol on Wednesday.