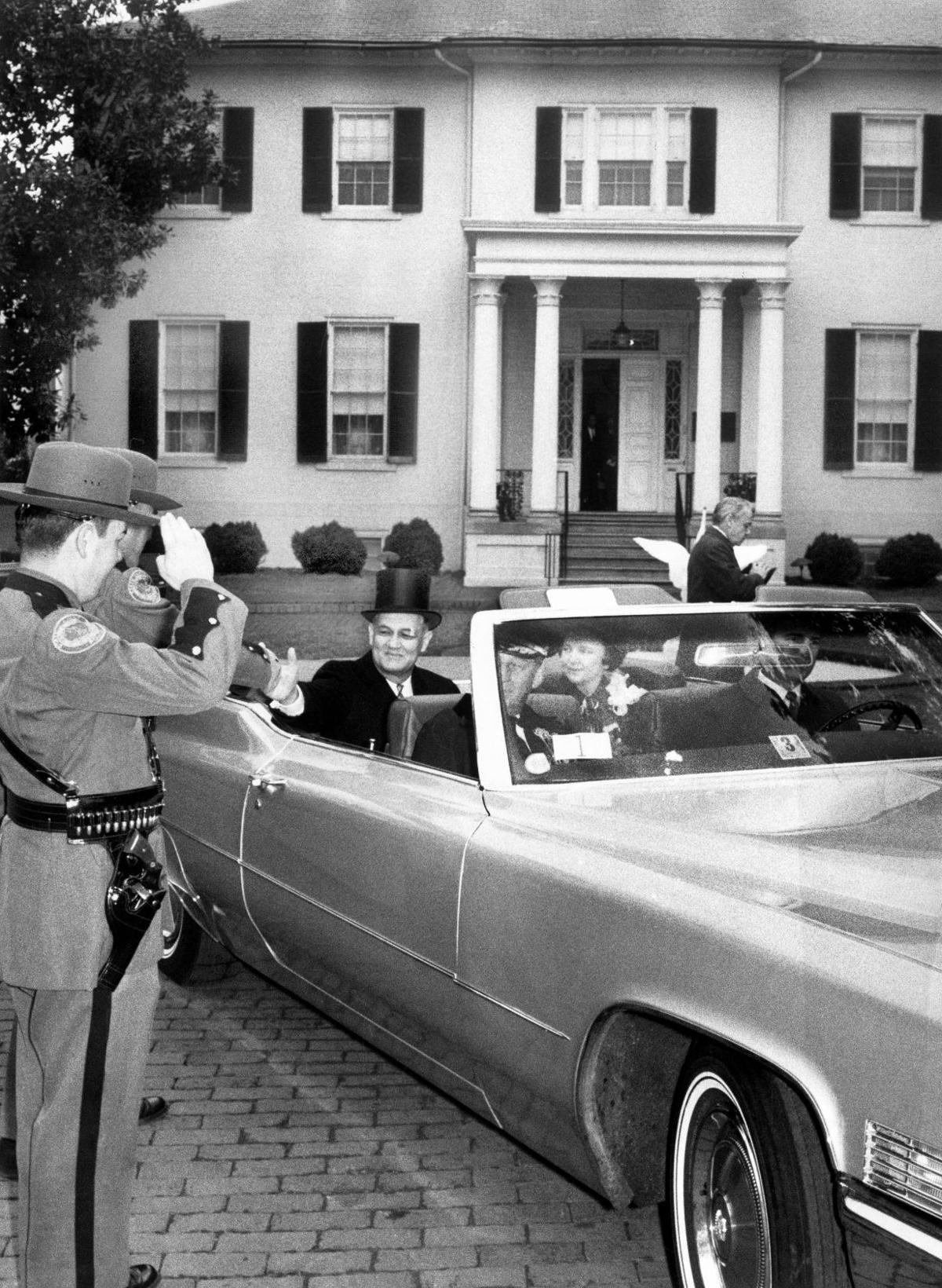 In January 1970, Virginia Gov. Mills Godwin received his final salute from state police as he and his wife left the governor’s mansion for Linwood Holton Jr.’s inauguration. Godwin, then a Democrat, was re-elected four years later as a Republican. 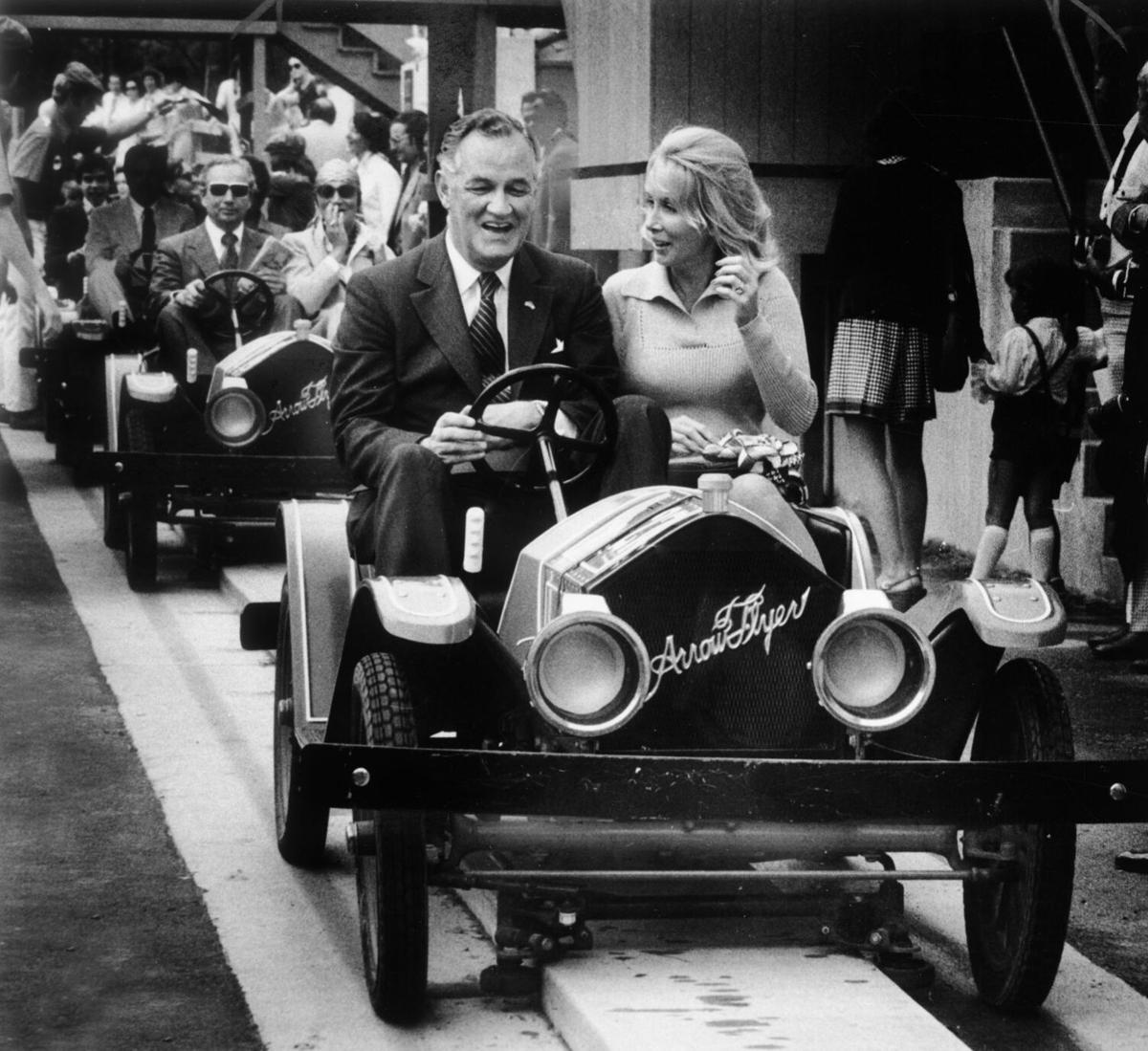 In May 1975, Gov. Mills E. Godwin Jr. and Mrs. August Busch III rode the lead car around the Le Mans track in the French village of the new Busch Gardens: The Old Country theme park near Williamsburg. The governor and Anheuser-Busch executives took part in dedication of park, which had opened to the public the previous weekend and drew more than 30,000 visitors.

This has been the pattern since 1976. The party that wins the presidency loses the governorship the next year. It’s the Virginia Curse. It has been disrupted once, when Terry McAuliffe — running for governor this year — was elected in 2013, following fellow Democrat Barack Obama’s re-election as president in 2012.

You may have to go back to the gubernatorial contest that immediately preceded the birth of the curse — the historic squeaker election of 1973 between a Democrat-turned-Republican and a Democrat-turned-independent — for a clue about the arc of the 2021 race.

Forty-eight years ago, two towering figures — one, patrician; the other, populist — battled for governor. The election unfolded against the backdrop of Watergate, the scandal that would topple a Republican president, but before doing so generated dangerous headwinds for the Republican nominee for governor.

That nominee was Mills Godwin, who would become the first Virginian to accomplish what McAuliffe aims to achieve: To be twice elected governor by popular vote. Godwin’s feat has gone unmatched because, while others considered seeking a non-consecutive term — state law limits a governor to a single term at a time — no one has done it. Until now.

The calamity in Washington that is buffeting Joe Biden — and by extension, McAuliffe — is not a patch on the one that would take out Richard Nixon and threaten Godwin. They are alike in that both disheartened the grassroots: Democrats fretting over Biden’s stalled program, Republicans fuming that Nixon was a criminal-in-chief.

These external events energized the opposition, instilling in those out of power a sense that Virginia, a state slow to change, could suddenly do so.

In 1973, the vehicle for such ambition was Henry Howell Jr., a peppery liberal Democrat who ran as an independent, in part, to put some distance between himself and a national party that had moved even further left, nominating the previous year for president a disastrous South Dakota dove, George McGovern.

Howell, in his second go for governor, was running — as he did in his first in 1969 and in his last in 1977 — as a man of the people. He promised to rein in the corporacy that ruled Virginia government as if it were a wholly owned subsidiary. One of Howell’s signature proposals: ending the sales tax on groceries.

It is a point in Virginia politics of which many contemporary practitioners are unaware or, worse, incurious. That Youngkin now peddles the idea — McAuliffe, reacting, says he’s OK with it — has more to do with what the candidates’ handlers tell them than the candidates’ grasp of the past.

Howell, much as Youngkin has done, reinforced his message with clever television ads. One featured shoppers at a grocery store branding the courtly Godwin, who, as a conservative Democrat, birthed the sales tax in his first term, as “too taxing.”

Youngkin could pay Howell a high compliment by making the line his own, hurling it at Democrats, who — while raising taxes for transportation — balk at doing away with the grocery levy unless it’s part of a modernization of a tax system with origins in the Colonial era.

Howell said revenues lost to a grocery-tax rollback could be made up with new levies on alcohol, banks and corporations. That provided an opening for Godwin. He said higher taxes on business were, in effect, taxes on jobs and would hinder employment.

The argument got the attention of Virginia’s then-center-right electorate. It was closely divided between Godwin and Howell, between the stability the former ensured and the change the latter promised.

Youngkin says little about how he’d recover on a continuing basis revenues lost to repeal of the grocery tax, which generates about $500 million annually for such services as education. He has moved on to education from taxes — a sign, perhaps, it’s not stirring voters.

Excitement was a problem for Godwin. As a convert to the GOP, he was viewed with suspicion by party regulars. That threatened the nascent Republican ascendancy here, which the national party envisioned as a model for the rest of the South, then shaking off with greater ease its loyalty to Democrats.

In the final stretch, Godwin’s fundraising advantage over Howell, whose cash dried up, helped. The nuts and bolts of modern elections helped more. The Republican National Committee sent in operatives such as Kenny Klinge, who put in place what, at the time, seemed unheard of: telephone banks that pestered voters to turn out for Godwin.

That would harness for Godwin what Virginia still was: a smaller, conservative state, with a population under 5 million and a countryside whose influence had to yet be dwarfed by cities and suburbs. White people outnumbered Black people about 5-to-1. Asian and Hispanic residents were negligible in number.

Fast-forward to 2021: Though McAuliffe is a retread rather than the next new thing, he — as a New Yawker who lives in the NoVa suburbs — reflects modern Virginia, a state of 8.6 million, now 42 percent non-white and where the majority of residents are non-natives living in metropolitan areas. This mix has remade Virginia center-left.

McAuliffe’s chances come down to what Virginia is.

Youngkin is hoping it doesn’t show up.

Your brain's 'fingerprint' can be identified in just 100 seconds

Virginia's state revenues up by 18.4% in September, as governor prepares next budget

The career prosecutor has experience in fighting domestic terrorism, which is seen as a growing problem.

In January 1970, Virginia Gov. Mills Godwin received his final salute from state police as he and his wife left the governor’s mansion for Linwood Holton Jr.’s inauguration. Godwin, then a Democrat, was re-elected four years later as a Republican.

In May 1975, Gov. Mills E. Godwin Jr. and Mrs. August Busch III rode the lead car around the Le Mans track in the French village of the new Busch Gardens: The Old Country theme park near Williamsburg. The governor and Anheuser-Busch executives took part in dedication of park, which had opened to the public the previous weekend and drew more than 30,000 visitors.