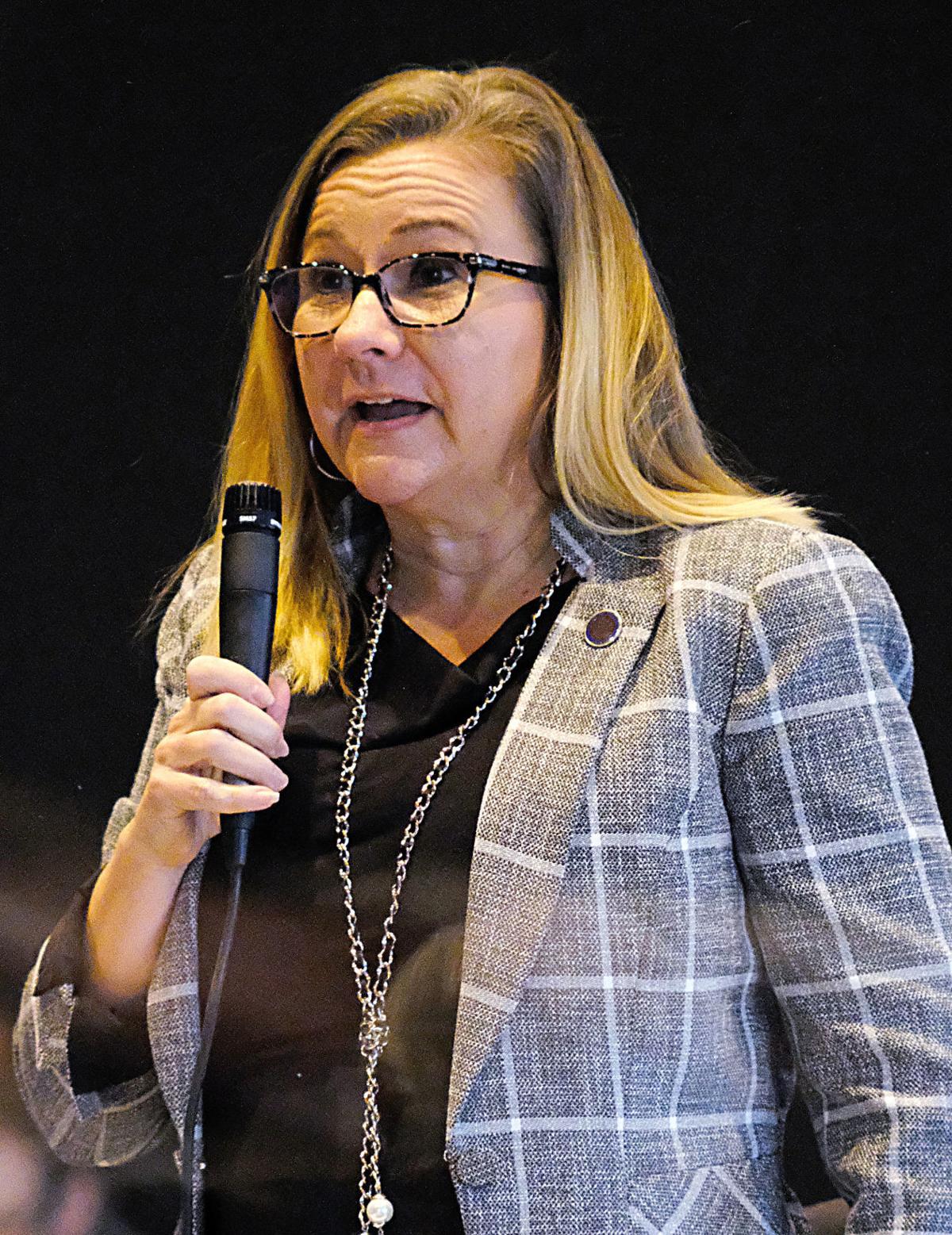 Sen. Amanda Chase, R-Chesterfield, objects to being stripped of her lone committee assignment by the Senate Rules Committee. 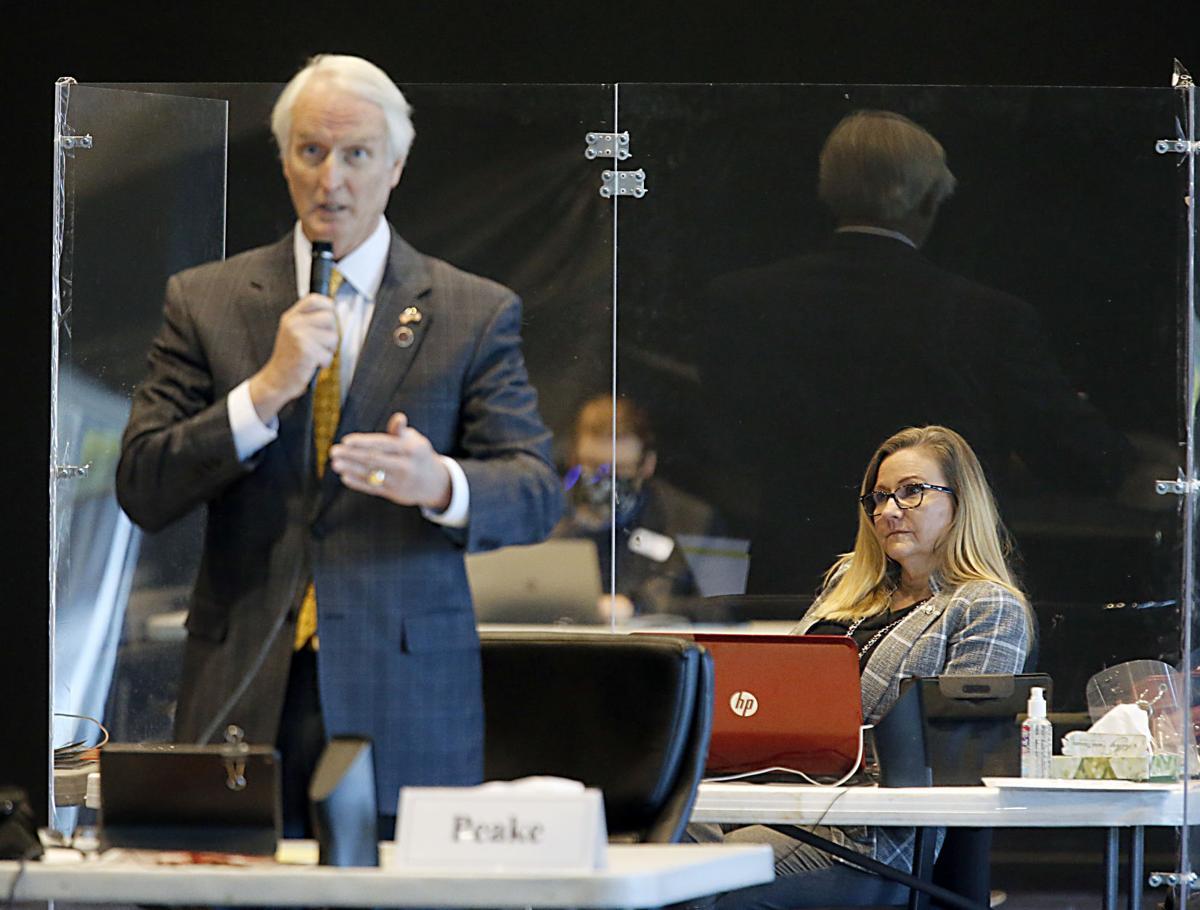 Sen. Mark Peake, R-Lynchburg, told the Senate on Tuesday that he would support stripping Sen. Amanda Chase (right), R-Chesterfield, of her committee assignment.

A Virginia Senate committee voted along party lines on Tuesday to back the censure of Sen. Amanda Chase, R-Chesterfield, for allegedly supporting an insurrection by supporters of President Donald Trump in the Jan. 6 attack on the U.S. Capitol while Congress was certifying President-elect Joe Biden’s electoral victory.

Chase did not appear at the meeting of the Senate Privileges & Elections Committee to defend herself against the proposed censure resolution, but said in an interview that the action was “politically motivated” because she is seeking the Republican nomination for governor.

“I don’t need to defend myself because I didn’t do anything wrong,” she said in the interview.

The panel’s 9-6 vote advanced the resolution. Censure would require a majority vote on the Senate floor.

The vote came less than two hours after Chase protested the loss of her only committee assignment. She called that move retaliation for leaving the Senate Republican Caucus. Chase announced in November 2019 that she would leave the caucus after it lost the Senate majority but re-elected Sen. Tommy Norment, R-James City, as the party’s Senate leader.

On Tuesday, no Republicans supported Chase in the Senate vote to ratify the new committee assignments, but six voted against the censure resolution in the committee.

Sen. Bryce Reeves, R-Spotsylvania, the only Republican to speak on Chase’s behalf before the committee vote, said the censure resolution violates the U.S. Constitution because “it tries to condemn someone for free speech and the right to assembly.”

Sen. Creigh Deeds, D-Bath, the panel’s chairman, told Reeves that he had wanted to ask Chase about her statement in the Senate last week that the people at the pro-Trump rallies that led to the assault — including the death of at least one Capitol Police officer — were “patriots who love their country.”

Reeves responded that he was “not here to defend her,” and added that he was didn’t know her intent “on any given day, but I can say her ideals don’t align with my moral compass.”

(Reeves’ chief of staff, Mark Snesavage, established the Unfit Virginia PAC, which seeks to stop Chase from becoming governor. The PAC says it is not affiliated with any candidate.)

Chase has said that she attended two pro-Trump rallies in Washington on Jan. 6 but that she had returned to her hotel before the mob assault on the Capitol.

The panel advanced the censure resolution against Chase the same day that U.S. Senate Majority Leader Mitch McConnell, R-Ky., blamed the Capitol attack on Trump and said the mob that stormed the building “was fed lies” by the president.

“They were provoked by the president and other powerful people, and they tried to use fear and violence to stop a specific proceeding of the first branch of the federal government which they did not like.”

McConnell said in a floor speech that he did not rule out voting to convict Trump on an impeachment charge approved by the House of Representatives of inciting insurrection.

Sen. John Bell, D-Loudoun, a 26-year Air Force veteran who introduced the censure resolution, cited McConnell’s remarks in a 20-minute presentation that alleged Chase had helped fuel the insurrection with comments at a rally earlier in the day that claimed the election had been stolen from Trump.

Bell said Chase also defended those who violently overran the Capitol in comments she made after the insurrection, including the speech on the Senate floor last week in which she said, “These were not rioters and looters. These were patriots who love their country and do not want to see our great republic turn into a socialist country.”

“Our words matter,” he said, “and we must be held accountable if we promote falsehoods that encourage violence and sedition.”

“She could have been here if she had chosen to,” said Sen. Adam Ebbin, D-Alexandria, who made the motion to advance the censure resolution.

Chase later derided the proceeding as “a clown show” and a “laughable” attempt to condemn her for exercising her right to free speech at a rally for Trump, who will leave office on Wednesday as Biden is inaugurated.

“I have done nothing wrong other than support President Donald J. Trump and attend a peaceful rally,” she said.

Chase accused Senate Democrats of hypocrisy for condemning her after many of them spoke at Black Lives Matter protests last summer in Richmond and other cities that sometimes turned violent, and “defended the domestic terrorists who destroyed property.”

She promised to introduce a resolution to censure Sen. Louise Lucas, D-Portsmouth, who was charged with felonies stemming from her alleged role in encouraging protesters to topple a Confederate monument in Portsmouth. One protester was injured seriously.

A Circuit Court judge dismissed the two felony charges against Lucas at the request of the Portsmouth commonwealth’s attorney, who said she lacked evidence to prove the charges made by city police.

Chase also clashed with fellow Republicans in the Senate on Tuesday after the Rules Committee removed her from the Senate Local Government Committee. The move made way for Reeves as part of the reassignment of committee seats after the death of Sen. Ben Chafin, R-Russell, from COVID-19 on New Year’s Day.

Chase alleged that she lost her final committee assignment because she had refused to pay dues to the Senate Republican Caucus once it re-elected Norment as its leader as Democrats took over the chamber.

Chase lost three of her four committee assignments last year after leaving the caucus and voting against a new Senate rule that says senators may lose their seats if they no longer are members of the political party under which they were elected.

“This is extortion and I chose not to participate,” she said. “And now I’m being penalized.”

One Republican after another rose in the Senate on Tuesday to challenge her account. They blamed the loss of her committee assignments on her decision to leave the caucus, despite the advice of its leaders that she could lose her seniority and other privileges in the chamber.

“It’s not correct to say because you didn’t pay your caucus dues you lost your committee assignments,” said Sen. David Suetterlain, R-Roanoke County, who agreed, however, that replacing Chase was “not a wise decision.”

“The senator from Chesterfield certainly said she was going to leave,” Newman said.

Norment, who has made no secret of his disdain for Chase since she cursed a Virginia Capitol Police officer over a parking space, called for preservation of Senate decorum and said, “Neither today, nor tomorrow or in the future will I be defending some of the controversial behavior of the senator from Chesterfield.”

No Republican voted against the new committee assignments, although Sen. Joe Morrissey, D-Richmond, who had spoken earlier, did not vote.

Chase was unrepentant, blaming her loss of committee assignments on her political enemies.

Asked later who was targeting her, she replied, “I’m being targeted by both Democrats and Republican establishment elites.”

Sen. Amanda Chase, R-Chesterfield, objects to being stripped of her lone committee assignment by the Senate Rules Committee.

Sen. Mark Peake, R-Lynchburg, told the Senate on Tuesday that he would support stripping Sen. Amanda Chase (right), R-Chesterfield, of her committee assignment.