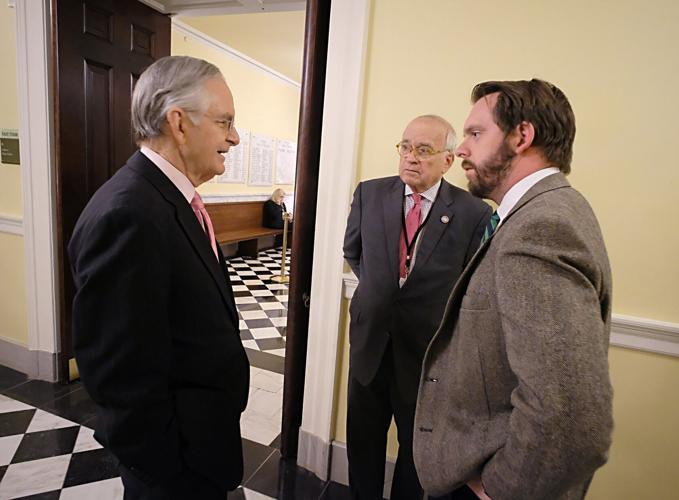 Senate Minority Leader Tommy Norment (from left), R-James City; Richard Cullen, counselor to Gov. Glenn Youngkin; and Matt Moran, a top Youngkin aide, conferred in a hallway outside the House chamber on March 11, a day before the session adjourned. 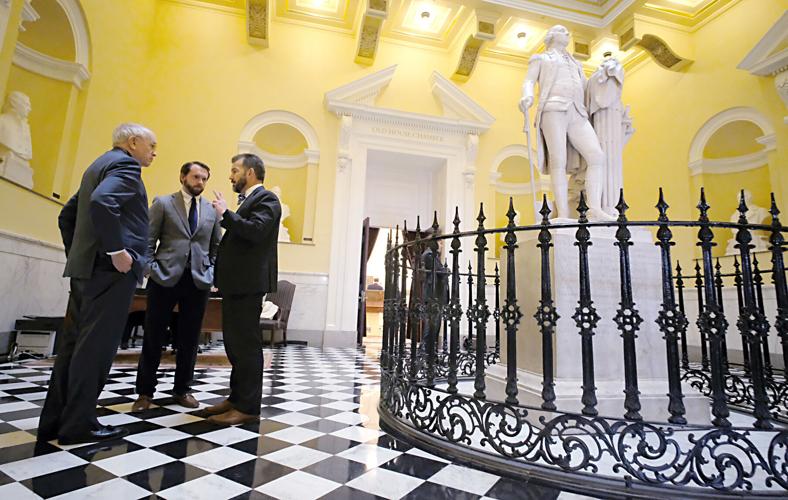 A political consulting firm tells clients it will help them navigate the new Republican-controlled executive branch of Virginia’s government. LINK Public Affairs might have an edge over its competition — one of its senior strategists is also a top aide to Gov. Glenn Youngkin and has been working in the governor’s suite.

The Youngkin aide — Matt Moran — wields significant power on behalf of the governor, telling lawmakers which bills the governor might sign or veto and negotiating with them on top policy issues like marijuana legalization, school choice and public funding for a new Washington Commanders stadium. He’s not on the state payroll but is employed by — and on paid leave from — two political consulting firms that seek to influence elected officials.

The situation is unheard of in Virginia, according to a veteran observer of state politics. And a law professor and expert on government ethics said that even if there’s no evidence of legal wrongdoing, the situation raises ethical questions.

Bob Holsworth, a former VCU dean and longtime observer of Virginia’s government, said the lack of transparency about the situation is unsettling.

Moran declined to be interviewed for this story, and instead directed questions to another Youngkin administration official.

“As senior adviser in the Governor’s office, I serve in a volunteer capacity and do so without compensation. I am on leave from all companies and as a result do not have clients with business before the Governor or state government,” Moran said in a statement, through a spokeswoman.

“I formalized this arrangement with counsel’s office and I am fully committed to my service to the Governor and the people of Virginia. It is a privilege to have the opportunity to serve the Governor and work on behalf of the Commonwealth.”

The companies Moran works for are Creative Direct, a political consulting firm, and LINK Public Affairs, a new offshoot of Creative Direct. The two firms’ consultants do not register as lobbyists.

Moran previously worked as a high-ranking aide to then-House Speakers Bill Howell, R-Stafford, and Kirk Cox, R-Colonial Heights, and as a lobbyist with the firm Gentry Locke. He also worked on the campaigns of Youngkin and Lt. Gov. Winsome Earle-Sears last year as a consultant.

He filed a statement of economic interest with the state in January because of his role in the governor’s office, which discloses his employment at Creative Direct and LINK Public Affairs, and two other LLCs through which he’s been paid for previous campaign work. The paperwork listed his position as deputy chief of staff.

In then-Gov. Bob McDonnell’s administration, Bob Sledd served as unpaid economic adviser to the governor. But that situation was different, Holsworth said, because there was a public, transparent process about what Sledd’s role would be and that he would not be paid.

Former Secretary of Finance Aubrey Layne is staying on in the Youngkin administration for a time as an unpaid special adviser to new Finance Secretary Steve Cummings while working as senior vice president and chief of staff at Sentara Healthcare.

Cullen said in a statement: “After reviewing the law, the ethics rules and precedents of other administrations, I made a determination about the proper way to work as a volunteer in the Governor’s office. My legal analysis was the same for both Mr. Moran and Mr. Layne.

“It’s important for administrations, regardless of the party in power, to have the ability to attract talent and expertise as is the case here. Both Mr. Layne and Mr. Moran have added value in their respective duties without cost to the taxpayer and we have been transparent about their roles.”

The Richmond Times-Dispatch learned through the Freedom of Information Act that Moran was not paid by the state when he was not listed on a roster of new Youngkin appointees, even though a Jan. 21 news release from the governor listed him as deputy chief of staff and director of policy and legislative affairs.

The governor’s office later corrected the news release to list his title as special adviser.

A sign on Moran’s office in the Patrick Henry Building, where the governor’s offices are, bore his name and the title “deputy chief of staff,” according to a Feb. 17 photo obtained by The Times-Dispatch.

In a statement through Youngkin spokeswoman Becca Glover, Moran said his leave from employers outside the administration began when Youngkin was inaugurated Jan. 15.

“I filed a complete financial disclosure and comply with all applicable state laws and executive branch policies, including the conflict of interest act,” Moran said.

The governor’s office would not say whether the arrangement included Moran abstaining from political work outside of the administration’s affairs. On Feb. 14, the halfway point of the General Assembly session, Moran reached out to The Times-Dispatch pitching a story about an official planning to announce a run in Virginia’s 7th Congressional District, Stafford County Supervisor Crystal Vanuch.

Since Moran makes his living, in part, by influencing government, “a key question is, is he in a position not just to affect his own financial interests, but the financial interests of his clients while he’s in that government position?” said Kathleen Clark, a law professor at Washington University in St. Louis who works in the area of government ethics.

“All of government ethics basically boils down to attempting to ensure that government officials act in the public interest rather than on behalf of a private interest — whether it’s their own interest, their brother-in-law’s interest, their private client’s interest. It’s all about trying to sort of separate government officials from identifiable private interests that could taint, that could affect, their work that’s supposed to be on behalf of the public.”

Holsworth said: “If there is a sign on an individual’s door that says he is the deputy chief of staff, the only reasonable inference is that that individual works for Virginia state government.”

Influence in the Capitol

Moran was the governor’s point person for lawmakers during the regular General Assembly session that adjourned March 12. Del. Lee Ware, R-Powhatan, said Moran notified him that if a bill Ware filed to end campaign donations from public utilities reached Youngkin’s desk, Youngkin would sign it.

In the final days of the regular session, Moran showed up with Cullen, the governor’s counselor, outside the House and Senate chambers to negotiate with lawmakers on major unresolved issues.

Del. Alfonso Lopez, D-Arlington, said that for many delegates, the only contact they had with someone from the governor’s office during the session was with Moran.

But Moran’s authority made at least one lawmaker uncomfortable.

Sen. Adam Ebbin, D-Alexandria, met with Youngkin on Feb. 22 in the governor’s ceremonial office in the Capitol. The senator said Moran was the only other person in the room.

Ebbin said that while he and Youngkin discussed their disagreement on how each party had blocked certain political appointees, the meeting was cordial. But afterward, Ebbin said, a House GOP committee chairman told his office that an Ebbin bill would be held up in committee at the request of the governor’s office.

In an exchange in a Capitol hallway, Ebbin asked Moran why. Ebbin said in an interview that Moran appeared to take responsibility for the holdup.

Moran responded: “You threatened the governor,” according to Ebbin.

Ebbin said he was dumbfounded. He quoted Moran as then saying: “Don’t worry, we’re not going to kill your bills, but you threatened the governor. Your bills are going by for the day.”

As discussions continued, Moran referenced the number of bills sponsored by Ebbin that appeared headed for legislative passage, saying: “And the governor is not particularly wedded to any of them,” Ebbin said.

Ebbin said Moran told him Youngkin “could sign them all, or — he implied that he could veto them all. He didn’t use the word veto. And I was a little bit shaken up, but I wasn’t going to retract my position.”

Chesterfield and Henrico counties are among 10 school districts that could be affected by a limited injunction barring enforcement of Gov. Gle…

Gov. Glenn Youngkin is putting pressure on the Virginia legislature with a new TV ad — that will air across the state starting Thursday — pitc…

A judge in Richmond on Friday ordered the Virginia Department of Education to provide more specific information to the Richmond Times-Dispatch in response to a FOIA request the newspaper made for communications between state officials and a nonprofit in Washington, D.C.

Gov. Glenn Youngkin has moved one of his senior aides — an unpaid state employee who was paid by political consulting firms during his work fo…

Senate Minority Leader Tommy Norment (from left), R-James City; Richard Cullen, counselor to Gov. Glenn Youngkin; and Matt Moran, a top Youngkin aide, conferred in a hallway outside the House chamber on March 11, a day before the session adjourned.