As one of eight gubernatorial appointees on the Virginia Marine Resources Commission, James Minor gets a vote on an anticipated permit request for a natural gas pipeline expansion south of Petersburg. Public records show that he’s been lobbying elected officials to support the project; he and the company that wants to build it won’t say if he was paid for the work. 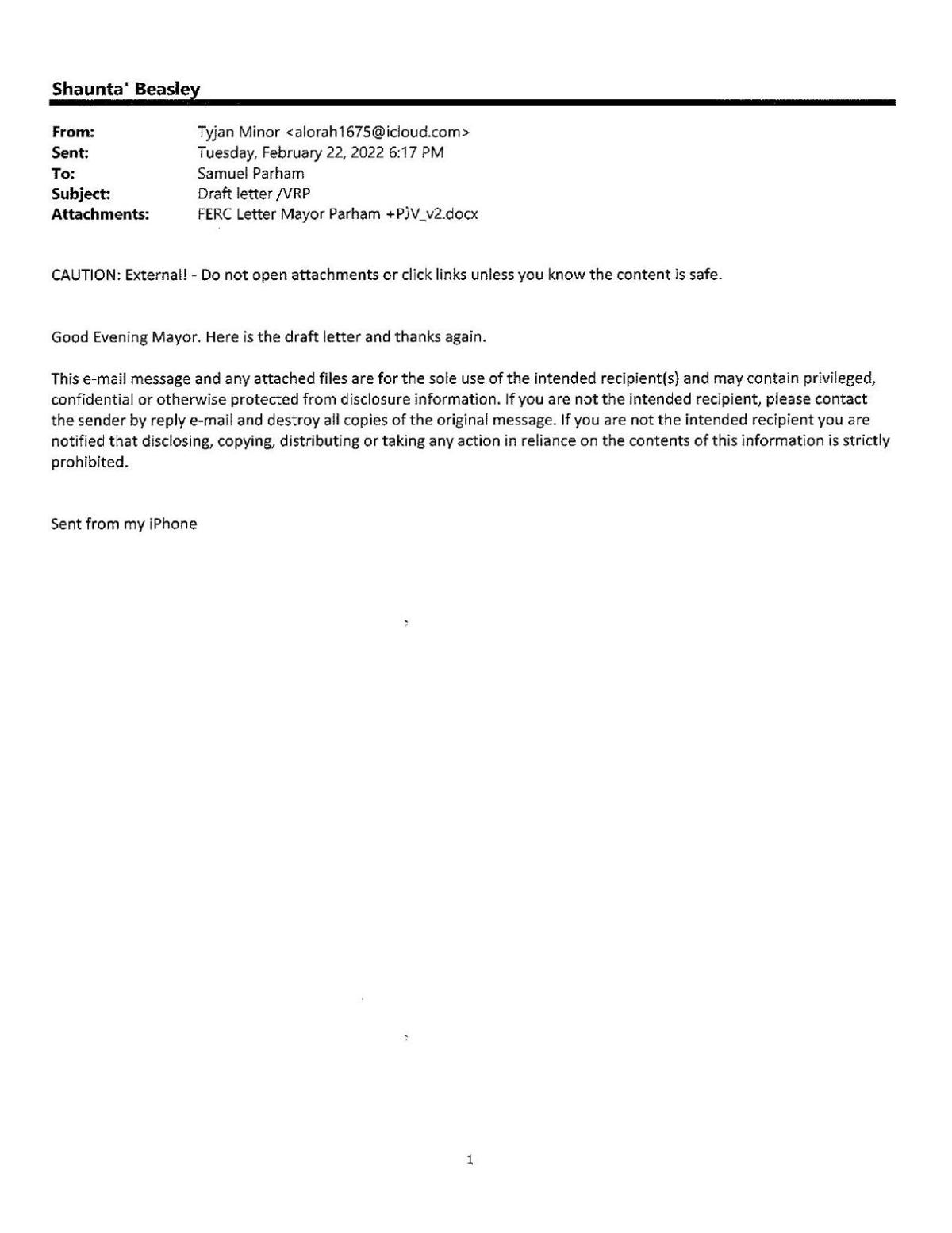 The commission regulates fishing and marine resources in Virginia. Public records show Minor emailed and called elected officials in Petersburg between February and May on behalf of a pipeline expansion project from TC Energy and its subsidiary, Columbia Gas Transmission.

The upgraded pipeline would run through Surry, Sussex, Southampton and Isle of Wight counties and the cities of Suffolk and Chesapeake. Compressor stations are part of the network that moves gas along the pipelines. A compressor station near Petersburg would be upgraded, according to TC Energy information submitted to the federal government in May.

Minor also sent the Petersburg mayor a draft op-ed and asked him to put his name on it, and emailed some City Council members with TC Energy talking points in support of the project.

The Energy and Policy Institute, a utility watchdog that advocates for renewable energy, discovered Minor’s work for the company in records obtained through a Freedom of Information Act request to officials in Petersburg. The organization, which researches utility campaign donations, front groups and political influence, shared the records with the Richmond Times-Dispatch.

Minor, who is a city of Richmond employee and the Richmond branch NAACP president, declined to say how he came to promote a fossil fuel project that’s headed to him for consideration as a Virginia Marine Resources Commission board member. He said he didn’t work for the company but wouldn’t say if he was paid by the company or a subsidiary, or say if someone approached him to do the work.

“When it comes to the VMRC, then I’m going to have to recuse myself from it. That’s all,” he said in a phone interview.

Minor said he supports the project because it’s important for jobs and economic growth, and said it will bring millions in local and state tax revenue.

“Throughout my career I’ve worked on countless projects as a consultant, a volunteer and in a leadership capacity,” Minor said by email. “I only work on those that I believe will benefit the Commonwealth and our communities.”

Minor did vote in favor of a separate TC Energy permit request before the commission on June 28.

TC Energy officials did not respond to a voicemail and two emails with specific questions. 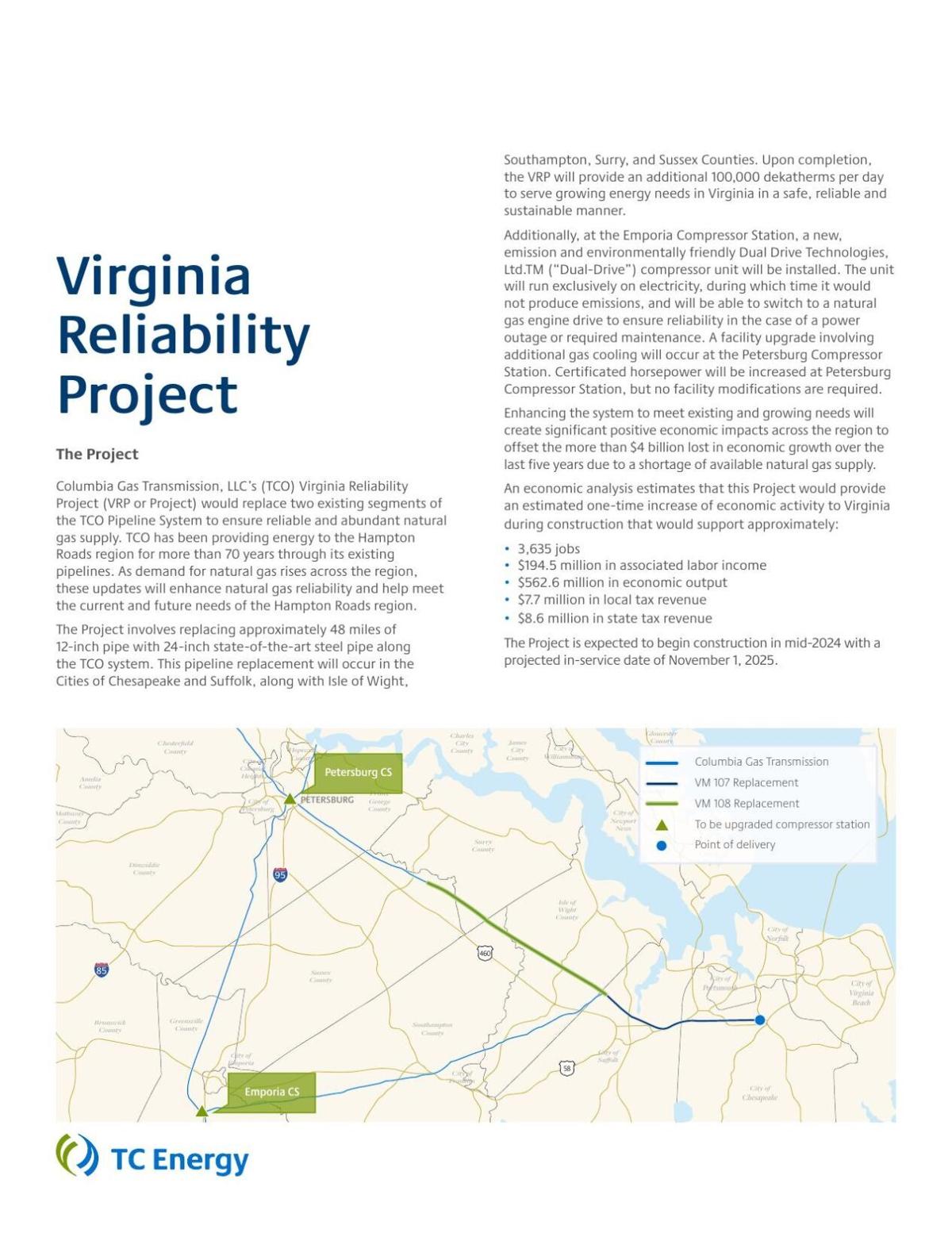 The company’s proposed Virginia Reliability Project would replace about 49 miles of 12-inch pipeline with 24-inch pipeline to send more natural gas to Hampton Roads for residential, commercial and industrial consumers.

The project includes upgrades to two natural gas compressor stations — the one in Prince George County near Petersburg and one in Emporia. TC Energy says the pipeline infrastructure is outdated and needs replaced to keep up with the increasing demand for natural gas in Hampton Roads.

Documents filed by TC Energy at FERC show a significant minority population near the compressor stations and along the pipeline route. The Virginia State Conference NAACP sent a letter to federal regulators asking for a thorough assessment of the project’s impacts on the environment and air quality.

According to public records, Minor — using a personal email account — emailed Mayor Sam Parham on Feb. 22 with a draft letter Parham could send to FERC. The letter included TC Energy talking points about the jobs and economic growth that the project would bring, expressed the mayor’s “strong support,” and asked FERC to support the project.

An aide to the mayor and the council emailed Minor back that day with a copy of the letter — this time on Petersburg city letterhead with the mayor’s signature. But the letter apparently did not get sent to FERC.

On April 19, Minor emailed Councilman W. Howard Myers and Councilwoman Treska Wilson-Smith with a draft letter similar to the one sent to the mayor. Myers sent the letter back an hour later with his electronic signature. Minor replied a week later to thank him and ask him to mail the letter to federal regulators.

Myers’ letter showed up at FERC.

On April 28, Minor sent some council members a company update that began, “Hello from Team VRP!” That is the acronym for the Virginia Reliability Project.

“It’s been an exciting few months and we’re looking forward to continuing our work to communicate openly and actively with the public about our plans,” Minor’s email said.

On May 17, Minor sent the mayor a draft op-ed with TC Energy talking points and asked if he’d sign on. It’s unclear from the records if the mayor agreed or if the op-ed was published anywhere.

She said the mayor didn’t send his letter to FERC because he wanted more information and never received it, Wilson-Smith didn’t receive a template to consider, and Myers sent his letter because he thinks the project will produce jobs.

Minor is a management analyst in Richmond’s Department of Housing and Community Development, earning $69,347. Some of his emails to the Petersburg officials came during business hours. The city of Richmond has a policy that says employees must get written approval before doing any paid outside employment or activity. The department’s director said the city had no record of Minor having secondary employment.

Then-Gov. Ralph Northam appointed Minor in 2020 to a second term on the Virginia Marine Resources Commission.

Minor and other state appointees are required to fill out a public financial disclosure statement each year. The purpose is so the public can identify whether state officials have any conflicts of interest. Minor signed his most recent form on Jan. 31. Asked on the form to disclose each employer paying him more than $5,000 annually, he did not list any employer.

Fossil fuel projects tend to be located in communities with heavier percentages of people of color or people with lower incomes, so companies seek to enlist support from public officials. The Virginia Reliability Project website touts support from several members of the Virginia General Assembly.

As president of the Richmond NAACP, Minor’s backing of the Virginia Reliability Project contrasts with the Virginia State Conference NAACP, which urged FERC in a letter to protect public health and cited a 2017 NAACP report about the pollution impacts of oil and gas facilities on African American communities.

TC Energy said there are schools, day care centers and churches within one mile of the Petersburg compressor station. Prince George has a higher minority population than the state, and the compressor station is located within a mile of even more heavily minority portions, according to the TC Energy filing.

Ann McLean likened President Abraham Lincoln’s efforts in the Civil War to Russia invading Ukraine. She added that slavery would have eventually ended had the Confederacy remained a country.

VIRGINIA BEACH — His unsuccessful attempt to give a summertime break on the gas tax was Gov. Glenn Youngkin’s big disappointment with a state …

"As you all know, nearly every city in our nation is experiencing a rise in gun violence. And Richmond is no exception," said Mayor Levar Stoney on Tuesday.