Virginia redistributes prison population count for redistricting, with gains for Richmond
0 Comments
Share this
1 of 2 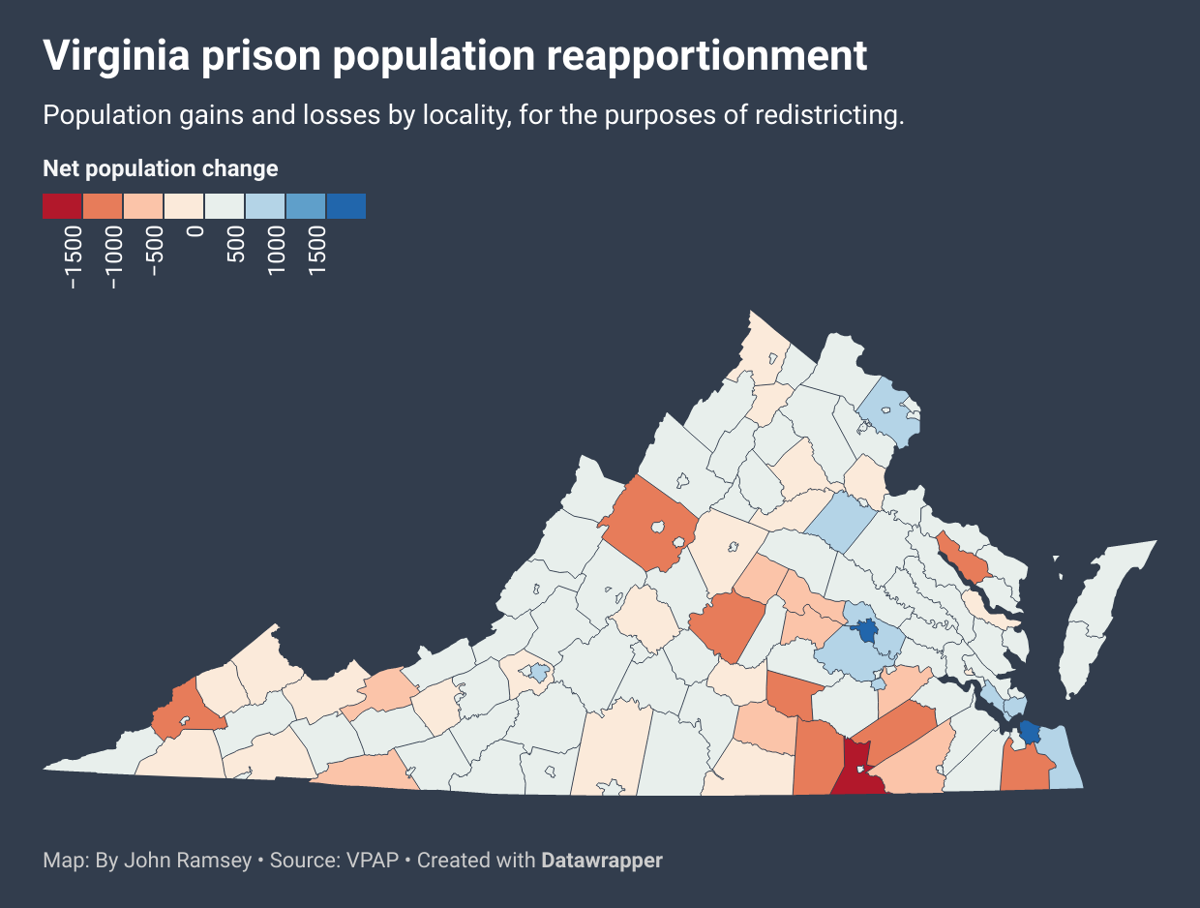 This map shows how Virginia localities gain or lose population in redistricting by the reclassification of inmates by their last known address. 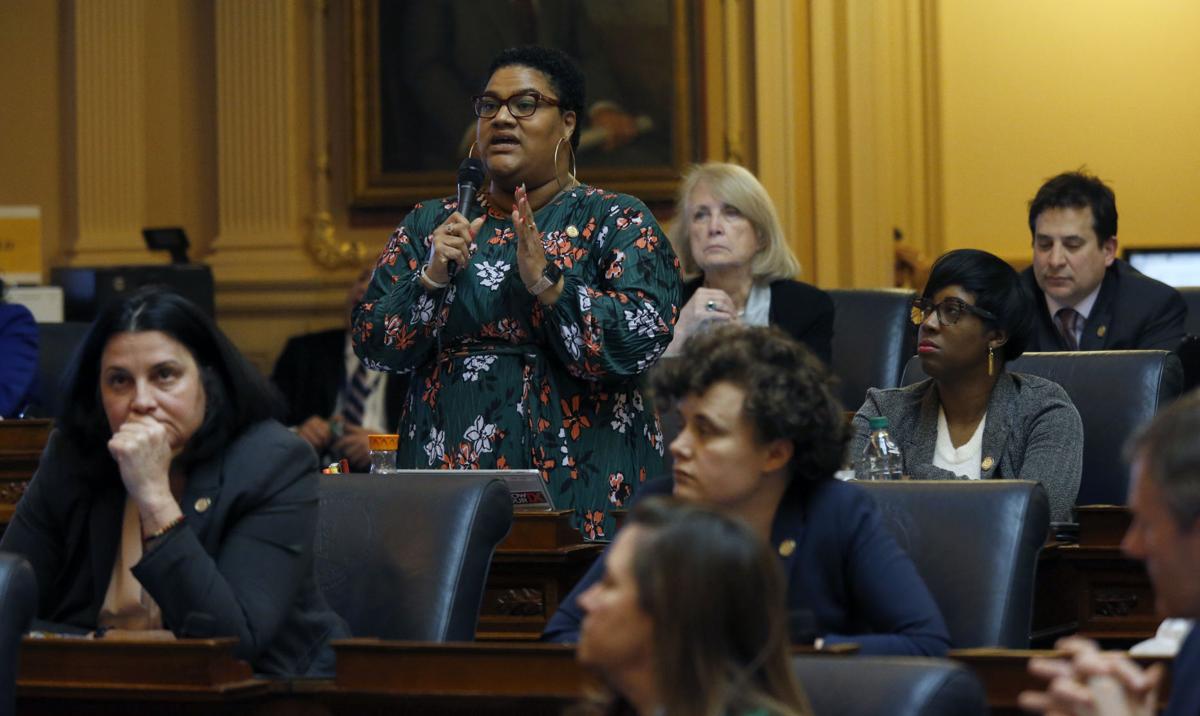 Del. Cia Price D-Newport News, sponsored the measure to change how the state apportions prison population counts for redistricting. Price is shown in March 2020, speaking against the proposed constitutional amendment to create the Virginia Redistricting Commission.

A new state policy to redistribute the count of Virginia’s prison population based on inmates’ last-known addresses for the purposes of political redistricting could boost representation in the state’s city centers, leading with Norfolk and Richmond.

The change in how Virginia counts inmates applies only to localities’ populations for the redrawing of legislative and congressional districts. The Virginia Supreme Court has taken on the job of redrawing the boundaries after the state’s new redistricting commission bogged down along partisan lines.

Virginia is one of 11 states that reallocates its prison population count in this way.

Roughly 38,000 people are incarcerated in the state’s prisons and an additional 6,400 in federal prisons in the state. A total of 41,855 inmates were reallocated to their last-known address for redistricting, according to data published by the redistricting commission and analyzed by the Virginia Public Access Project.

Supporters of the policy say the change will help bring better representation to people who are incarcerated, whose families may still live in the districts where they resided, and will correct an imbalance of power that gives weight to the votes of people who happen to live near a prison.

Norfolk and Richmond each gained close to 2,000 people, followed by Newport News and Virginia Beach at 967 and 808.

Sen. Travis Hackworth, R-Tazewell, joined other local leaders from Southwest Virginia in an unsuccessful lawsuit to halt the new policy, arguing that it would politically weaken Virginia’s rural areas and Republican voting strength.

“Virginia prisons are typically located in rural districts with greater Republican voting strength,” the lawsuit read. It added that lawmakers like Hackworth would “still bear all of the responsibility to care for the people in their prisons, without any of the political representation they would otherwise be entitled to receive.”

Greensville County, home to the Greensville Correctional Center, lost by far the most people at nearly 2,400, followed by Sussex and Buckingham counties at around 1,400 each.

The legal challenge hinged on the idea that the legislature did not include the change in the constitutional amendment voters approved in November 2020 in order to change the redistricting process. The suit also argued it was a violation of the state constitution to do it as standard legislation. The state Supreme Court rejected the lawsuit in September.

Del. Cia Price, D-Newport News, introduced the language to change Virginia’s policy and said she believes that many people in prison are not well-represented by some of the GOP lawmakers who count them in their districts.

Price said she first became aware of the issue while listening to a podcast, in which people who were incarcerated around the country relayed that they had never met their local representatives. They hadn’t visited their facility or even worked on criminal justice issues. She noted that previous efforts in the legislature to reallocate the state’s prison population were led by some Republicans, including then-Del. Riley Ingram, R-Hopewell.

Price’s locality of Newport News stood to gain when the policy went into effect. She said her work in the legislature, and that of many Black lawmakers, already included work in the interest of these citizens.

“We take the prison population seriously, and we advocate on their behalf,” Price said. “Some people just don’t have representation by the voice [in the district] they’re being counted in.”

Phillip Thompson, former president of the NAACP’s Loudoun County branch, said the policy change is about racial justice. While Black Virginians make up 20% of the state’s population, they account for 58% of people in prison or jail in Virginia, according to an analysis by the Prison Policy Initiative.

“A lot of times those politicians also vote against prison reform, criminal justice reform. You have people being represented by lawmakers that don’t represent their interests,” Thompson said.

The shift could end up benefiting people of color overall by forcing mapmakers to include more suburban and urban areas in some districts to make up for population loss, thereby diversifying those districts.

“If 2,000 or 3,000 in your district are nonvoting, that means you’ve got a fairly safe seat. If you can’t count on those folks, you’ll have to expand that district, maybe to include areas with more voting people of color,” Thompson said.

Supporters of the prison reallocation policy said that, since people in prison can’t vote in Virginia, counting them in the districts where they are incarcerated during redistricting boosts the voting power of everyone else in that district.

“By counting people who are incarcerated as if they are residents of the prison location, that effectively gives extra representation to the people who live near those prisons,” said Tram Nguyen of the group New Virginia Majority, which advocates for working-class people of color.

“It’s body counts essentially for localities that have prisons in them, but they don’t have political power to act as though they elect their representation.”

Nguyen said a prisoner’s last-known address, when available, could be an indicator of where they are likely to return.

“That’s where their safety net is most likely to be, where they’ll be seeking out resources,” she said.

No effect on funding

Mike Wessler, a spokesman with the Prison Policy Initiative, said such policies only impact the redistricting process, and not, for example, how federal or state funding is allocated.

“Most of the programs that use federal population data have other mechanisms for identifying how the funding will flow,” he said. “This just influences how they’re counted for the purposes of drawing lines, not funding formulas for highway or other programs.”

Wessler said his group and others have spent more than 20 years appealing to the U.S. Census Bureau to count people in prison at their last-known address. The bureau hasn’t gone that far, but for the 2020 census, it made changes to the way it reports population data that allowed states to make the change.

“Nearly a dozen states have recognized that it doesn’t make sense to count people in the community where the prison lies,” he said.

Thompson said the next step for Virginia should be to grant voting rights to people in prison. In Virginia, 1 in 7 African Americans is unable to vote due to a prior felony conviction, a rate that is twice the national average, according to a report from the criminal justice nonprofit The Sentencing Project.

People convicted of a felony automatically lose their right to vote in Virginia. A proposed constitutional amendment that the legislature approved last year would restore voting rights to these citizens immediately upon completing their sentences. To go into effect, the proposed constitutional amendment would need to pass the legislature again next year, and then be approved by Virginia voters in a statewide referendum in November 2022.

Gov. Ralph Northam earlier this year adopted the change as an administration policy, restoring the rights of 69,000 Virginians who completed their sentences but were on probation. The transition team of Gov.-elect Glenn Youngkin, a Republican, did not immediately respond to a request for comment about the new policy.

Republicans appear poised to take control of the House of Delegates with a 52-48 edge in January, pending the outcome of recounts in two close contests in Hampton Roads. Democrats hold a 21-19 edge in the Senate.

The proposed measure to amend the state constitution, as introduced by Sen. Mamie Locke, D-Hampton, originally would have restored voting rights to Virginians whether in prison or not, but the amendment was rewritten by the time it came to the full Senate. A high-ranking Democrat said it was what the caucus felt it could support.

Locke said during an emotional speech last session that “felony disenfranchisement is as Jim Crow as poll taxes.”

“The right to vote is the essential currency of democracy,” Locke said. “Withholding it from 100,000 of Black Virginians whether they are incarcerated or not makes a mockery of any pretense that we are a commonwealth seeking to right past wrongs, and offer reparations for past injustices.”

Just two states, Maine and Vermont, allow people in prison to vote. Seventeen bar citizens from voting from prison but allow it upon release, even through parole and probation.

“From a whole lot of angles, that’s just ridiculous,” Thompson said. “If you’re a citizen in the U.S., you should be able to vote. Hopefully soon we’ll restore the right to vote for prisoners in the commonwealth. They never should’ve lost it.”

This map shows how Virginia localities gain or lose population in redistricting by the reclassification of inmates by their last known address.

Del. Cia Price D-Newport News, sponsored the measure to change how the state apportions prison population counts for redistricting. Price is shown in March 2020, speaking against the proposed constitutional amendment to create the Virginia Redistricting Commission.