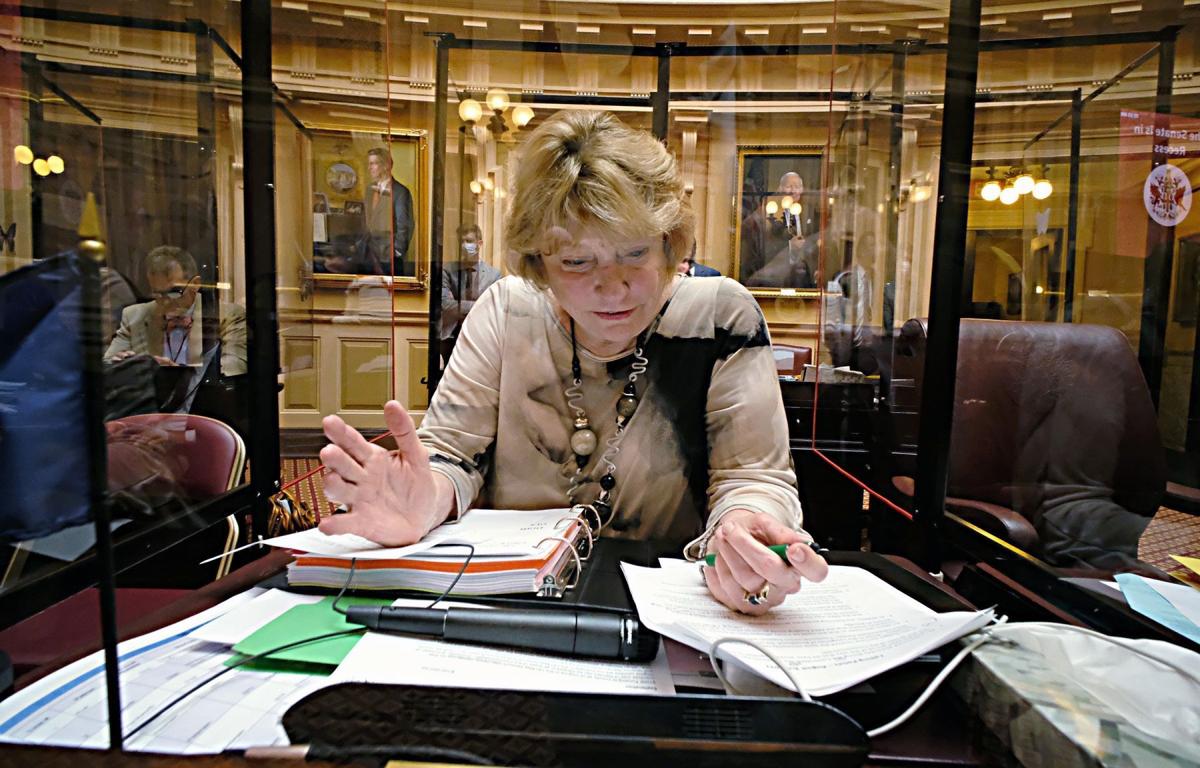 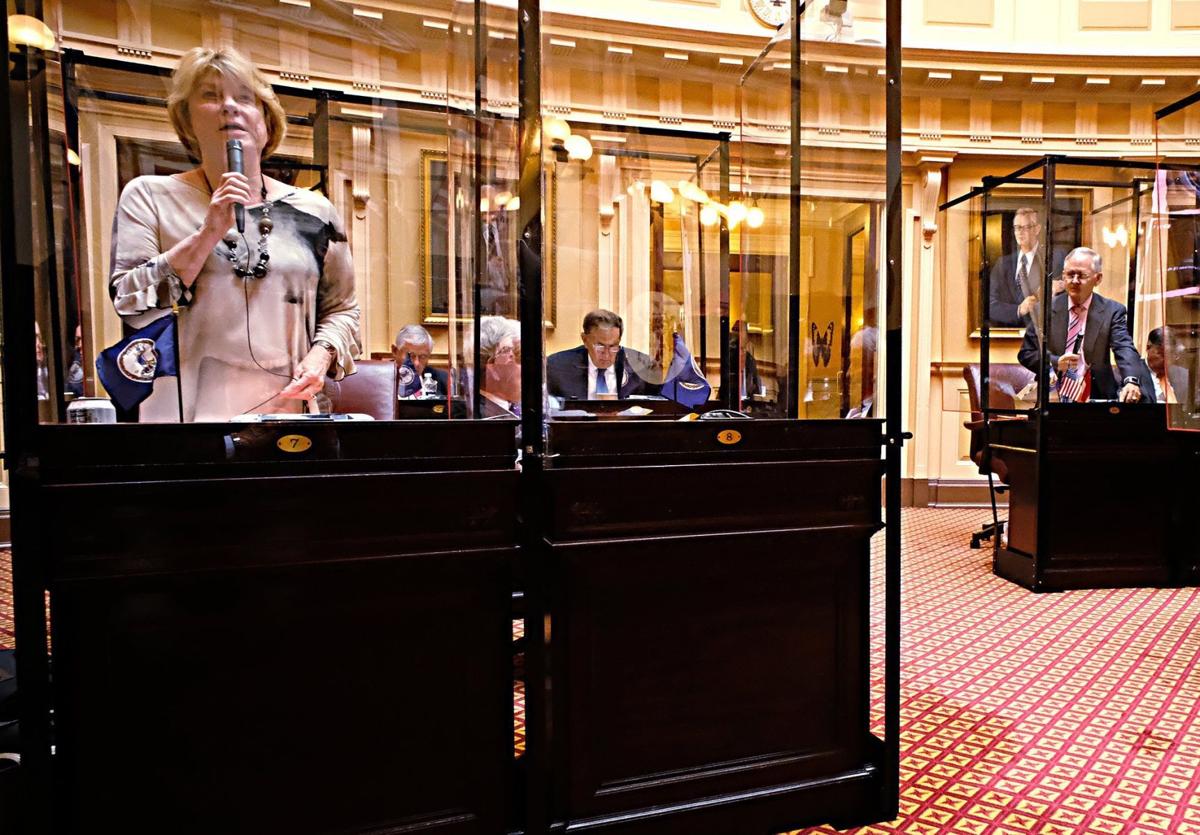 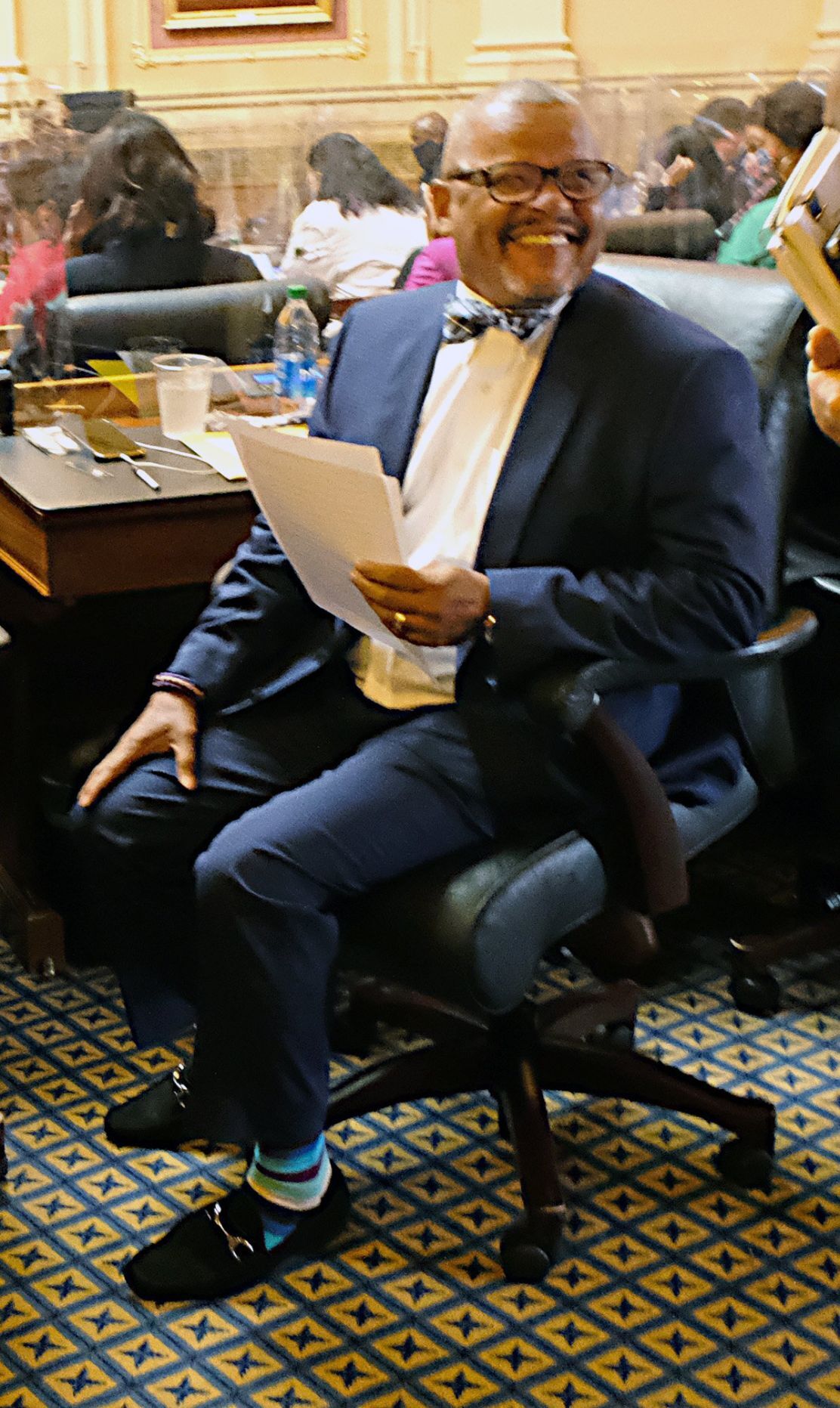 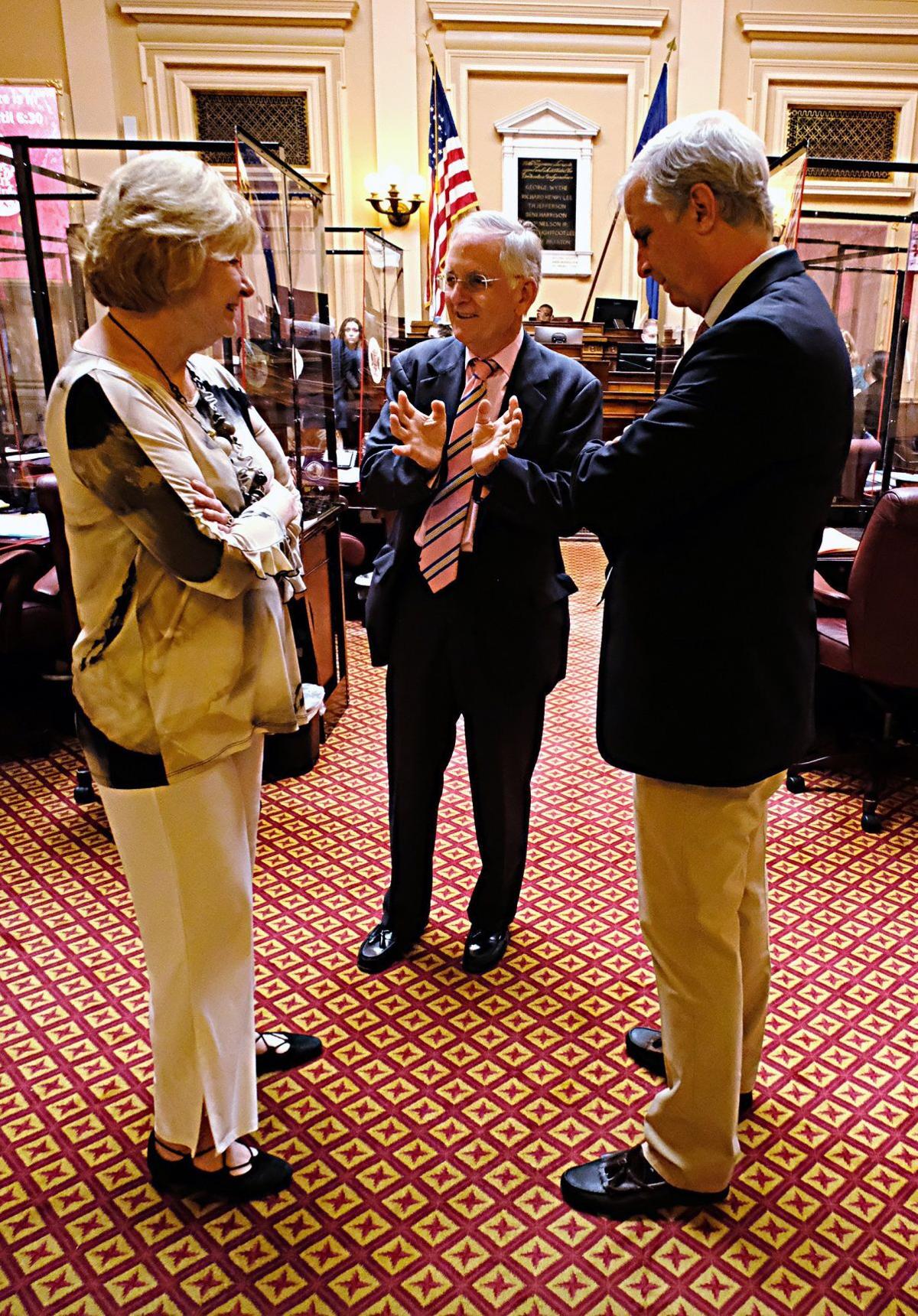 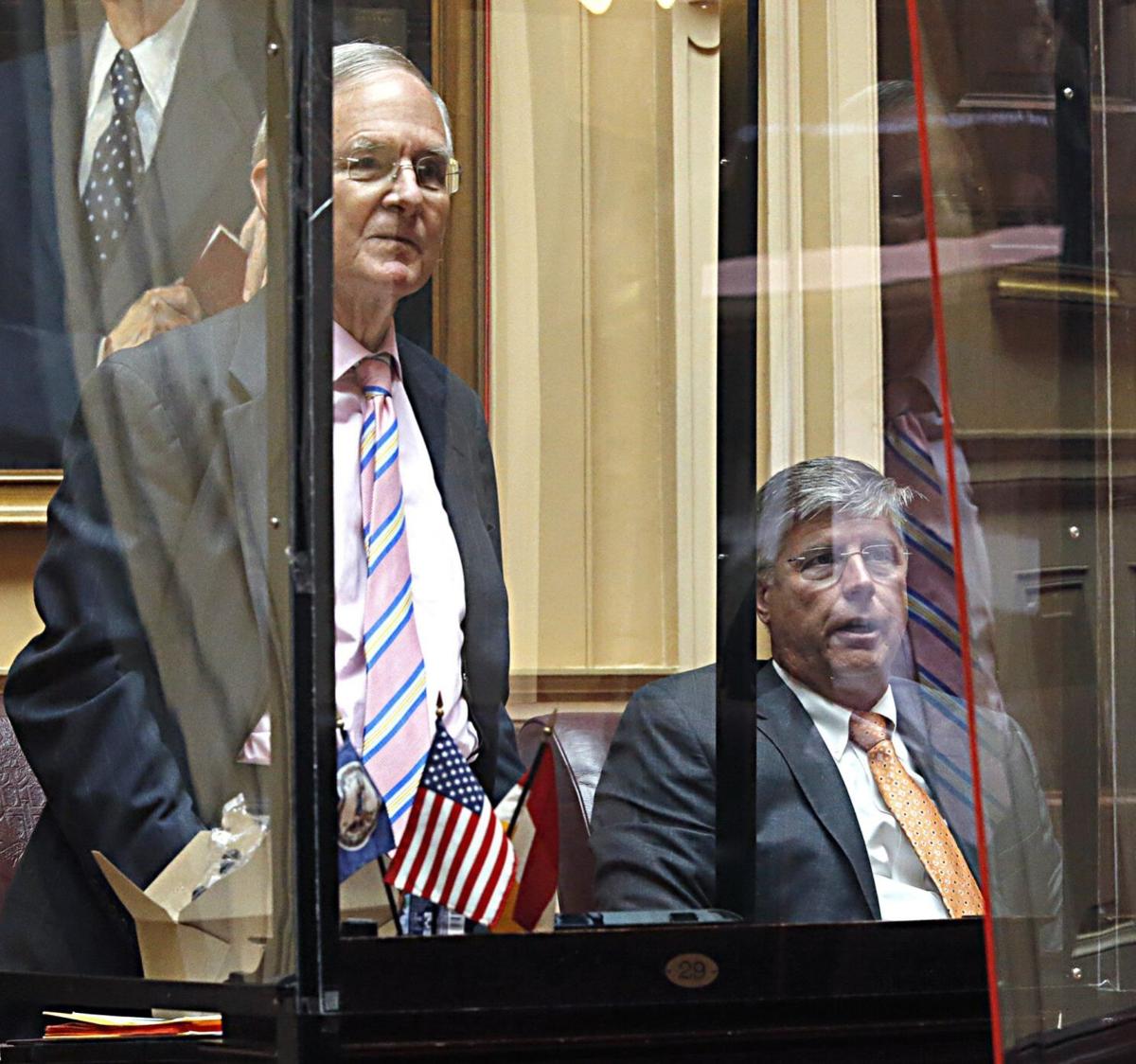 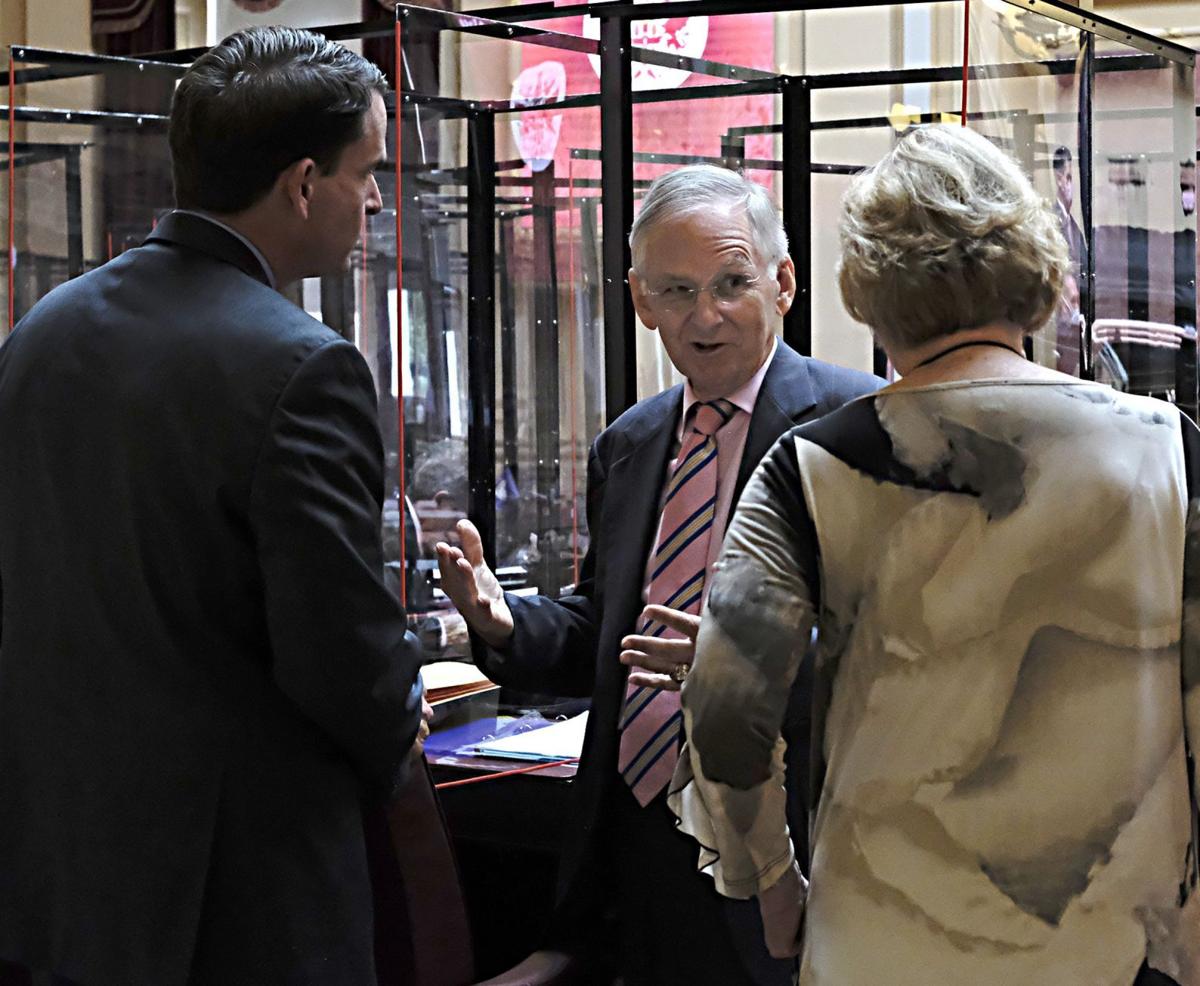 The House of Delegates swiftly adopted the budget bill without amendment while the Senate added $200 million in expanded pay relief for sheriff’s deputies and other state-supported local law officers.

In a slow-moving session that lasted late into the night, the Senate struggled to act on 142 proposed amendments so it could adopt its version of the budget and begin to work on the House version of the spending plan.

In the end, after a debate remarkable for its political bitterness, the Senate passed the budget just before 11 p.m. by a 22-18 vote, with Sen. Emmett Hanger, R-Augusta, the only Republican to support it.

Earlier, the Senate approved a requirement that the Virginia Department of Motor Vehicles reopen its offices to walk-in service within 30 days of the budget becoming law.

The edict, proposed by Sen. Chap Petersen, D-Fairfax City, would have to clear the House and Gov. Ralph Northam to take effect.

But his proposal drew strong support among Republicans who say that nothing concerns constituents more than the difficulty of doing business with the DMV since the COVID-19 pandemic forced the agency to require appointments for service.

“This is the best, most practical idea I’ve seen since I’ve been in Richmond this week,” declared Sen. Richard Stuart, R-King George.

But Democratic leaders warned that requiring DMV offices to reopen for walk-in service before the COVID-19 pandemic is fully under control could endanger the health of state employees and the customers they serve.

“We’ve got an unknown situation that’s heading our way, and the numbers don’t look good,” said Senate Majority Leader Dick Saslaw, D-Fairfax, who noted that COVID-19 cases had jumped above 1,700 a day with the spread of the delta variant of the coronavirus.

Petersen withdrew an amendment he had proposed to require all state employees to return to work in their offices within 30 days of the budget’s passage, but he succeeded in requiring the Department of Human Resource Management to submit a detailed report on how many employees are working remotely or in their offices.

The Senate also stripped a provision that Northam had inserted to regulate deals using the name, image or likeness of student athletes at Virginia colleges and universities. Lt. Gov. Justin Fairfax agreed with Senate Minority Leader Tommy Norment, R-James City, that the provision did not fall within scope of the issues before the assembly during the special session.

Northam and General Assembly budget leaders had sought to prevent any changes to the budget plan they crafted to spend $3.1 billion in federal aid in the fiscal year that began July 1 and more than $350 million in the next two-year budget.

They also propose to set aside at least $800 million in money Virginia received under the American Rescue Plan Act as a hedge against a potential surge in COVID-19 infections because of the highly contagious variant that can break through the defenses of vaccines.

But the Senate broke ranks on Wednesday by adopting an amendment proposed by its newest member, Sen. Travis Hackworth, R-Tazewell, elected this year to replace Sen. Ben Chafin, R-Russell, who died from COVID-19 on New Year’s Day.

Hackworth proposed to replace a $1,000 bonus for sheriff’s deputies and regional jail officers with a $5,000 hazard pay bonus to match the amount proposed for state police troopers in the governor’s budget bill.

His proposal would use $66.6 million of one-time federal aid for the bonuses in this fiscal year and $133.2 million in the next two-year budget.

“They are vastly understaffed,” he said.

Northam and assembly budget leaders had proposed hazard pay bonuses of $1,000 for deputies, officers at regional jails and correctional officers, but they devised a much richer compensation package for state police to recruit and retain officers to fill more than 330 job vacancies.

The plan for state police included $20 million this year and $20 million in the first year of the next budget, pending the results of a compensation study due Oct. 1. Northam also promised to propose continuing raises with state funds in the second year of the budget.

“We are proud to have put forth an appropriations bill that prioritizes funding for many of Virginia’s hardworking first responders, including bonuses for state police, correctional officers, deputy sheriffs, and direct care staff,” Northam said in a joint statement on Wednesday with House Appropriations Chair Luke Torian, D-Prince William, and Senate Finance Chair Janet Howell, D-Fairfax.

“While this funding is tremendously important, we also recognize the need for a long-term solution to ongoing staffing challenges,” they said in the statement on Wednesday afternoon.

The governor and budget leaders promised to create a work group to address compensation for correctional officers, deputy sheriffs and regional jail officers that would deliver its findings by Oct. 15 for action in the next budget.

“We are committed to recruiting and retaining highly qualified officers and ensuring the safety of families and communities across the commonwealth,” they said.

Republicans acknowledged that funding proposed for state police and other law officers demonstrated that Senate Democrats are not proposing to reduce police funding, as some racial justice protesters have demanded, but they still warned of a crisis brewing in law enforcement.

“Our police right now are in trouble,” said Sen. Steve Newman, R-Lynchburg, who described an exodus of law enforcement officers in his area to trucking companies that pay more than sheriff’s departments and jails.

“I think this will stop the bleeding,” Newman said.

But Senate Democrats rejected his proposal to give a $5,000 bonus to officers in local police departments.

In behavioral health, Democrats supported a proposal by Hanger to extend a 12.5% Medicaid rate increase for providers of community services to Virginians with developmental and intellectual disabilities through the end of the fiscal year next June.

Without the amendment, a temporary increase in rates would end on Dec. 31, undermining the ability of providers to hire and retain staff as the state’s minimum wage rises to $11 an hour on Jan. 1.

However, Democrats killed a proposal by Sen. Jen Kiggans, R-Virginia Beach, to give private hospitals $33 million to expand their care of people in psychiatric crises to divert them away from overcrowded, understaffed state mental hospitals. The amendment arose from a proposal by the Virginia Hospital and Healthcare Association.

The House voted 71-25 to adopt the budget as Northam had proposed it. A day earlier, House Democrats rejected Republican efforts to amend the bill, including an attempt to expand compensation for sheriff’s deputies and other state-supported local law officers.

House Speaker Eileen Filler-Corn, D-Fairfax, who is defending the Democratic majority in House elections in November, said in a statement, “Virginians have experienced so much hardship in the last year and a half, and this budget sends a clear message to Virginians: We hear you, we are working for you, and we are building an even stronger Virginia in the process.”

Meet the man who takes care of Punxsutawney Phil

Meet the man who takes care of Punxsutawney Phil

Youngkin's charter schools agenda gets the backing of university leaders