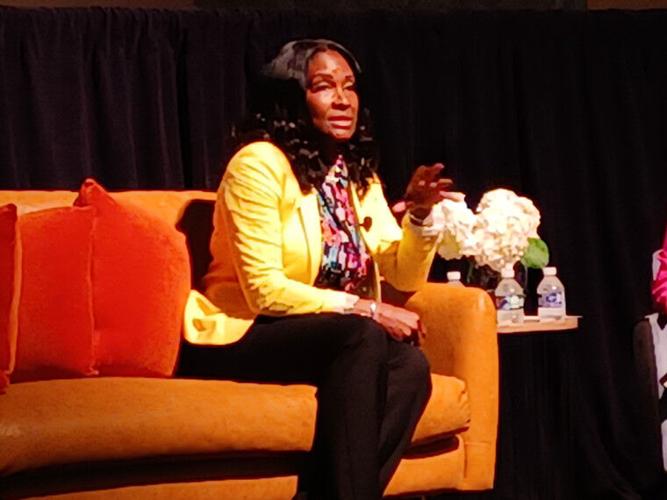 Dionne Hughes discussed her 30-year business career with salons in Richmond and New York Monday at the BLCKStreet Conference. 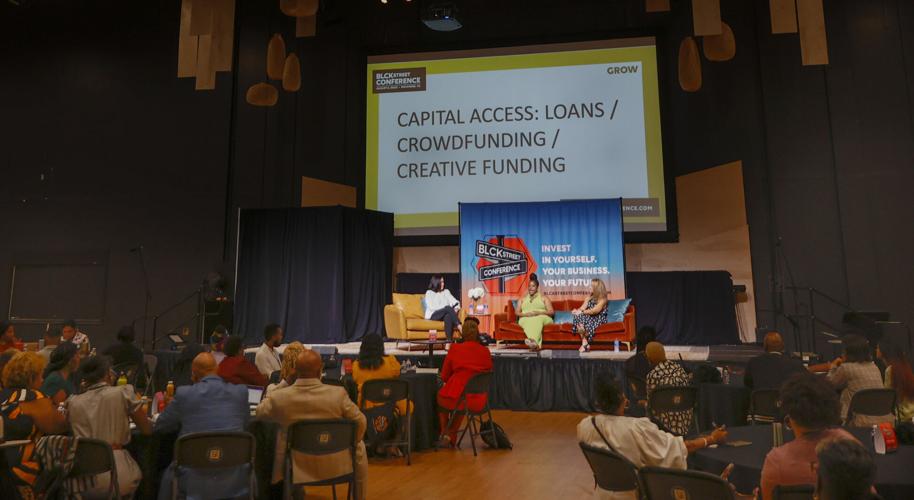 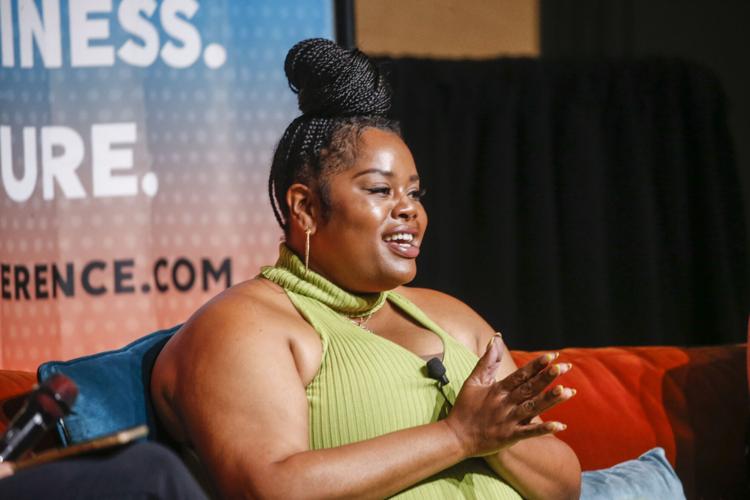 Jessica Norwood, founder of the financial innovation firm RUNWAY, spoke at the conference on Monday. 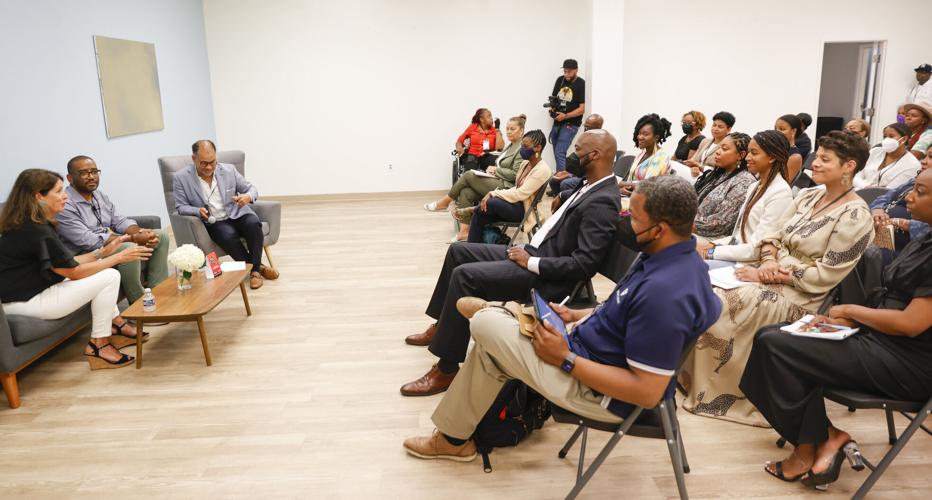 Attendees listened on Monday as Jen Finn chatted with Ronald Falls and Marland Buckner during the conference in Richmond. 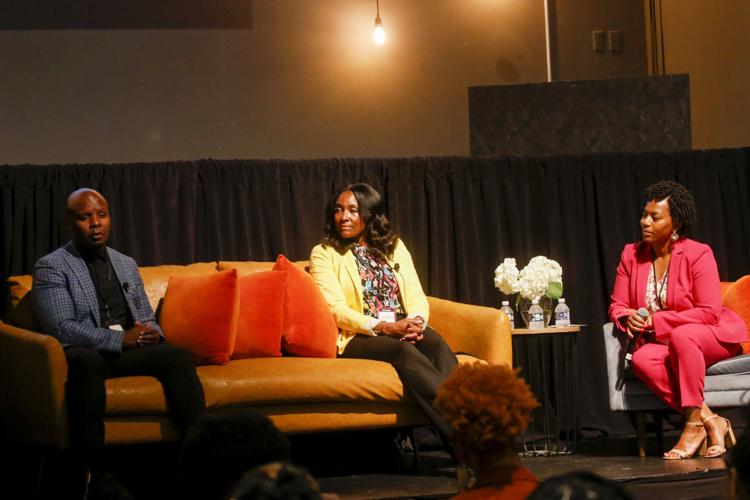 Jershon Jones (left), a managing director with Harris Williams, spoke during the BLCK Street Conference at The Collaboratory of Virginia in Richmond on Monday as Dionne Hughes and Markeia Johnson listened.

She was a high school senior who knew she wanted to be a hairstylist and who, like so many successful business owners, turned to people she knew — in Dionne Hughes’ case, her grandpa — for her launch.

It was the hair dryers and other tools her grandfather bought and set up for her in his basement that started Hughes on a 30-year career with salons in her Richmond hometown and New York.

She shared her story at The Collaboratory of Virginia on Maywill Street on Monday during the BLCK Street Conference, a daylong teaching and networking session for Black-owned businesses.

Hughes made a point that many others did as well: it’s not just long hours and hard work that make business success. Having a clear idea of where you’re going, and a network to support you, are key.

“If you can envision yourself doing it, you can do it,” she said.

It’s not just dreaming, either. When Hughes began thinking about the idea of moving into the New York market, it meant some careful thinking about that market, about new stylings and approaches she’d need to do.

Envisioning herself doing it meant thinking hard about regularly traveling to New York and what that would mean for her Richmond salon, as well as whether she could tackle the new styles and demands of New Yorkers.

But she’s used to turning to others when running her business.

Early on, a salon-owner, hearing of her business in the basement, offered both a place in her shop and the advice that Hughes needed to go to school to get a state license.

Working there, Hughes saved the money she needed to buy the equipment and rent space for her own salon.

It was only later, once that business was solidly on its feet, that she felt ready to borrow money to expand her operations.

“That was the first time I had a loan, and I was SO glad when I paid that off,” she said.

Starting a business with her own savings, rather than getting into debt immediately, was the old-fashioned way of doing things, she said afterward. But it was the way that worked, she added.

Fellow panelist Jershon Jones, a managing director in the Harris Williams investment bank, said he was struck by one thing Hughes did as her business grew: that she shared some of her profit with the stylists working for her.

“She gave up some margin but got more productivity,” he said.

“You need to think about all your resources ... capital isn’t out there all alone,” Jones said.

Those resources go beyond the money investors put into a business, but also include possible mentors and networks of others in business and the community, he said.

The COVID-19 pandemic brought home the need for business owners to make one especially important connection: a banker, said Jetheda Hernandez, senior director for strategic alliances and programs for the National Minority Supplier Development Council and owner of two businesses.

Some 70% of Black-owned businesses had to close their doors for at least some time during the pandemic, but many struggled because they did not have that vital banker connection, she said.

That meant access to the federal lifeline of Paycheck Protection Program loans was a lot more difficult.

“You’ve got to be proactive,”said Floyd Miller, president and CEO of the Metropolitan Business League, echoing Hernandez’s point, after only a handful of conference attendees raised their hands when Hernandez asked how many had a business banker.

In the end, said Markeia Johnson, manager of the Primis Works financial education and life skills program for single mothers, the thing about business is that “it always starts with something small, and grows bigger.”

PHOTOS: Jackson Ward - Then and Now

Having pushed their way through the COVID-19 pandemic so far, many small businesses in the Richmond area are looking ahead to how they can eme…

The Virginians borrowed money from online loan companies that claimed to be owned by three Native American tribes, but were actually operated by a Texas firm, Think Finance.

Princess Kate brushes off heckler during visit to Northern Ireland

Dionne Hughes discussed her 30-year business career with salons in Richmond and New York Monday at the BLCKStreet Conference.

Jessica Norwood, founder of the financial innovation firm RUNWAY, spoke at the conference on Monday.

Attendees listened on Monday as Jen Finn chatted with Ronald Falls and Marland Buckner during the conference in Richmond.

Jershon Jones (left), a managing director with Harris Williams, spoke during the BLCK Street Conference at The Collaboratory of Virginia in Richmond on Monday as Dionne Hughes and Markeia Johnson listened.