Sens. Tim Kaine and Mark Warner of Virginia on Thursday called for President Donald Trump’s removal via the 25th Amendment, a day after a mob of Trump supporters stormed the U.S. Capitol.

“I believe that the Cabinet, led by the vice president, should invoke the 25th Amendment. Donald Trump is no longer able to serve,” Kaine said in a Zoom news conference with reporters.

Warner also called for the president’s removal in a separate news conference. “I absolutely believe it should be on the table,” Warner said.

Rep. Abigail Spanberger, D-7th, also urged Trump’s removal Thursday night, saying in a statement: “I call on Vice President Pence and the Cabinet to invoke the 25th Amendment to protect our country. However, if the Vice President fails to act, it will become necessary for every Member of Congress bound by our constitutional oaths to take further action.”

Spanberger added: “I was in the House Chamber when the attack occurred. I witnessed firsthand the results of the President’s anti-democratic and un-American efforts to maintain control at any cost, and as a consequence of his efforts, he must be removed from office.”

Rep. Don McEachin, D-4th, said on Twitter that he is backing articles of impeachment accusing the president of abuse of power, “to remove Donald Trump from office and ensure that following yesterday’s attack on the U.S. Capitol he never serve in any office of trust again.”

Warner said he has been in contact with members of the Trump Cabinet with whom he has relationships and has urged them to decide “how they want to be recorded by history,” and “whether they want to be enablers.”

“Those members of the Trump Cabinet who have any conscience or any sense of obligation to rule of law, I do think it’s incumbent upon them to act or to at least resign and not be part of this travesty that is playing out before our eyes,” Warner said.

Warner, who is in line to head the Senate Intelligence Committee, angrily called the assault on the Capitol a “desecration.” He called for an investigation into the security breakdown at the U.S. Capitol and said Congress should “come down hard on the social media companies who have turned a blind eye to the preaching of hate and white supremacy and nationalism.”

Warner said of the president: “The absolute outrageousness of this person’s actions to basically encourage this horde of thugs to attack the Capitol, when he knew his own vice president was there doing his duty,” speaks to “the character of Donald Trump.”

Kaine and Warner joined a growing chorus of fellow Democrats, including Senate Democratic leader Chuck Schumer of New York and House Speaker Nancy Pelosi of California, in calling for Vice President Mike Pence to invoke the president’s removal under the constitutional provision that would require the vice president and a majority of the Cabinet to say that the president cannot fulfill his presidential duties.

“Bluntly, this was a Donald Trump-inspired disaster,” Kaine said.

He said that together with “his mismanagement of the pandemic,” his “idiotic” veto of the defense spending bill — which Congress overrode — and his “foolish antics” that Kaine said cost the GOP its Senate majority, “This Trump-inspired riot yesterday will be his legacy and he will be remembered for the rest of American history for death, division and depression.”

Kaine said he does not think Trump plans to attend President-elect Joe Biden’s inauguration on Jan. 20, but he said Congress should formally declare that Trump is not welcome.

Virginia’s four Republican members of Congress, all of whom backed challenges to the electoral results, joined Democratic colleagues in denouncing the attack on the Capitol, but did not call for Trump’s removal.

Rep. Rob Wittman, R-1st, who represents Hanover and New Kent counties, said Thursday on Twitter: “What happened on Wednesday in our nation’s Capital is a blemish on this nation.”

Rep. Elaine Luria, D-2nd, who, like Spanberger, represents a swing district, said on Twitter on Thursday night: “President Trump’s incitement of violence and a terrorist attack on the US Capitol are the final straw — he must be removed from office immediately and by whatever legal means possible.”

Rep. Morgan Griffith, R-9th, did not take a position on invoking the 25th Amendment, saying that is a decision up to the Cabinet and vice president. But Griffith does not support impeaching Trump. He said it was not a “rational course of action under these circumstances,” with so few days left in the president’s term.

Rep. Jennifer Wexton, D-10th, on Wednesday night urged Pence to invoke the constitutional provision. Rep. Bobby Scott, D-3rd, also called for Trump’s removal on Thursday, saying in a statement: “It has become clear that the risk of him staying in office exceeds the risk of him serving out the final days of his term.”

Rep. Don Beyer, D-8th, also said he has signed on to articles of impeachment drafted by three Democratic colleagues. “Donald Trump is a clear and present danger to our country and he has to go immediately,” Beyer tweeted.

Gov. Ralph Northam, who sent Virginia State Police and Virginia National Guard members to Washington to help quell the rioting, said on Twitter that he is extending Virginia’s National Guard deployment at least through Jan. 20, “based on conversations this morning with our emergency teams and Washington D.C. Virginia state police also remain on the ground.”

Northam added: “We will be there until President-Elect Biden is officially sworn in.”

Warner asserted that more people were arrested at the Capitol when disability activists tried to peacefully enter lawmakers’ offices than were arrested in Wednesday’s mob violence.

“Anyone that still questions whether systemic racism exists in our country need only think about what the response would have been if this had been a Black Lives Matter group of protesters as opposed to this Trump mob.” 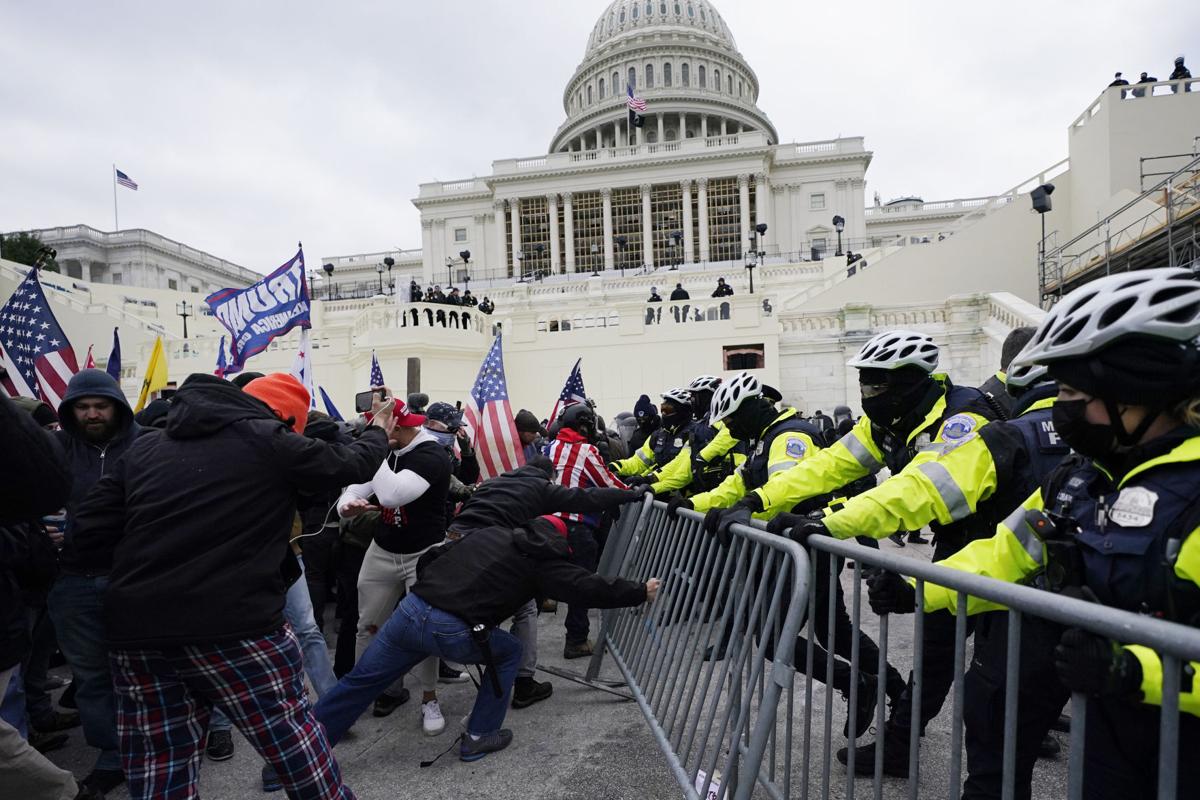 A mob of Trump supporters tried to break through a police barrier at the U.S. Capitol on Wednesday. 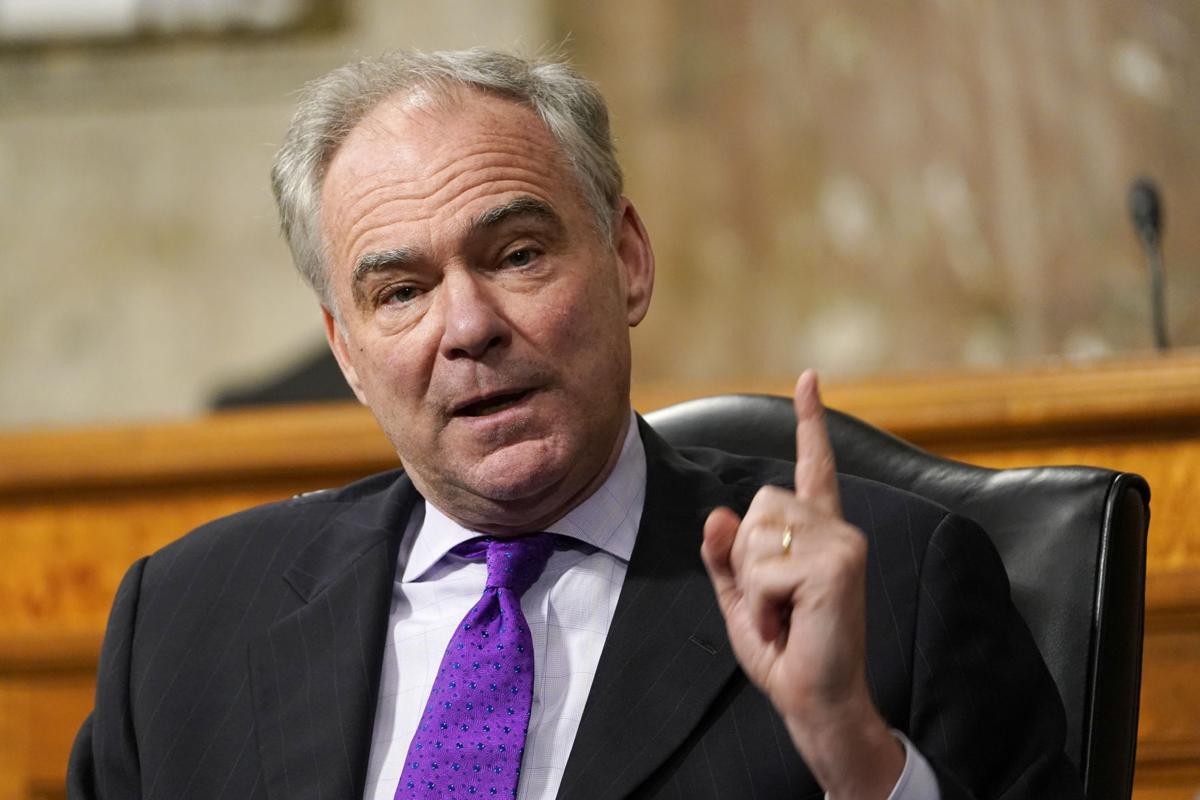