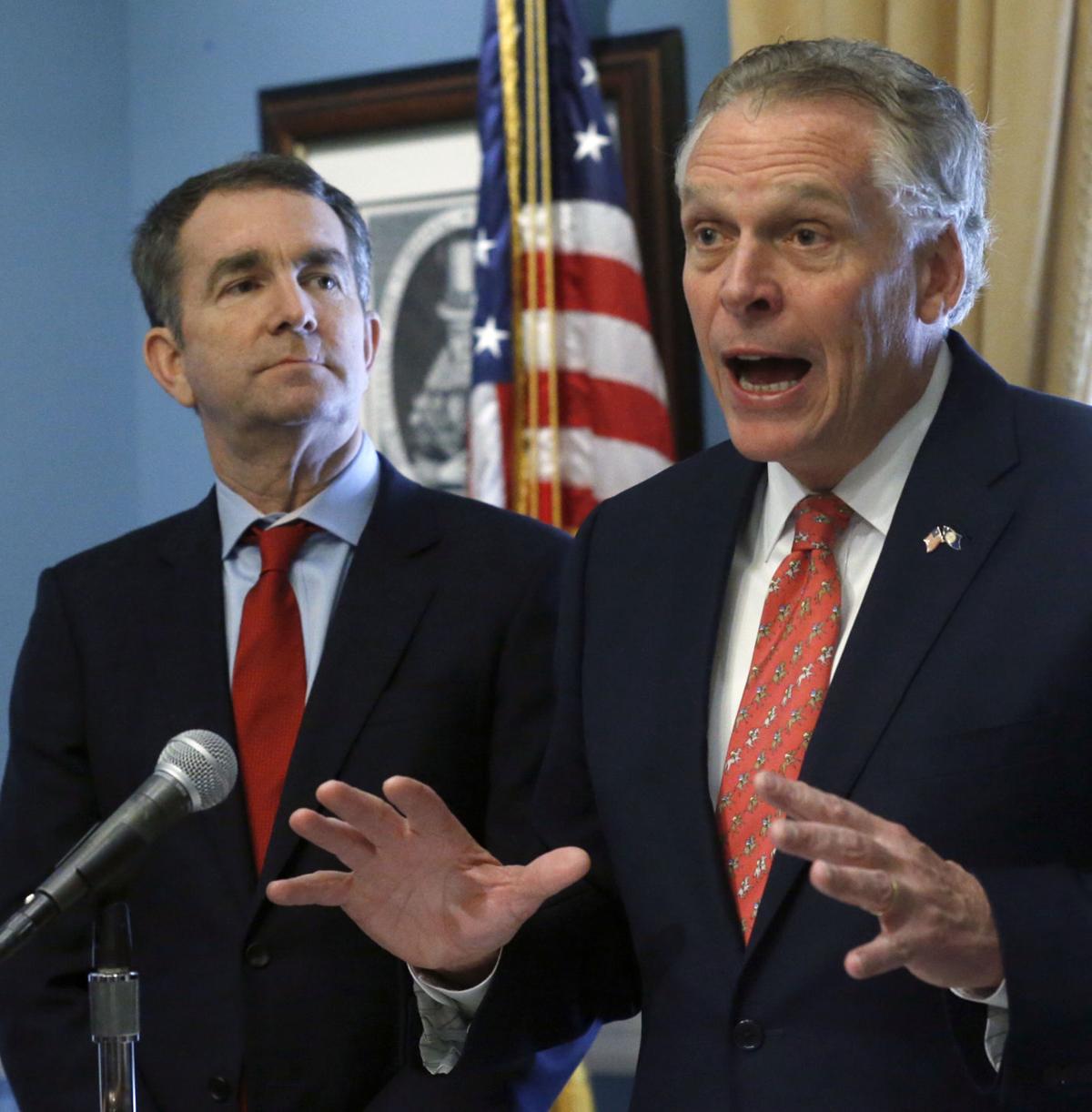 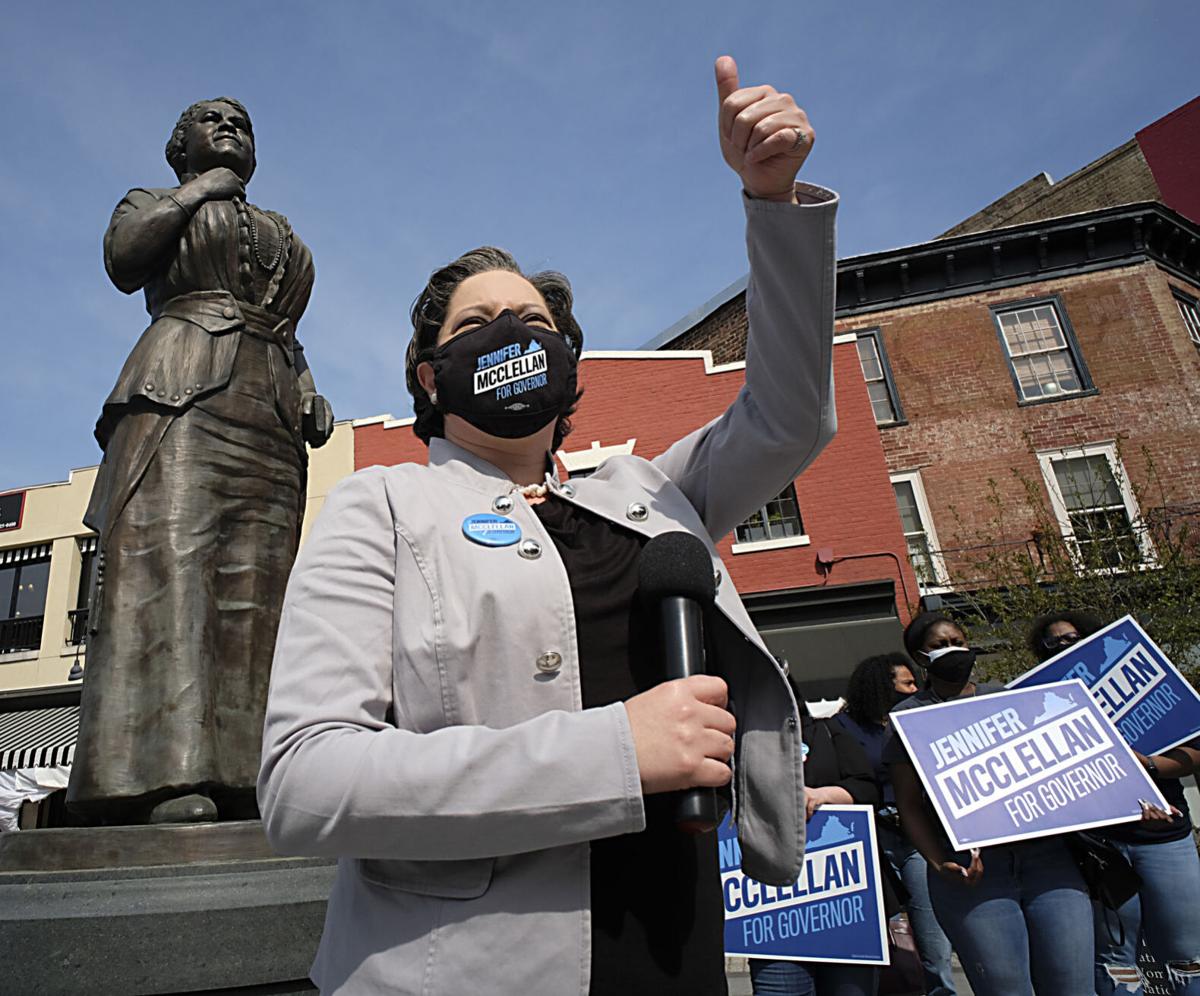 Sen. Jennifer McClellan, a Democrat running for governor, spoke Thursday at Richmond’s statue of Maggie Walker. “Too many — all of our governors — have been men,” she said. “We have the opportunity to change that.” 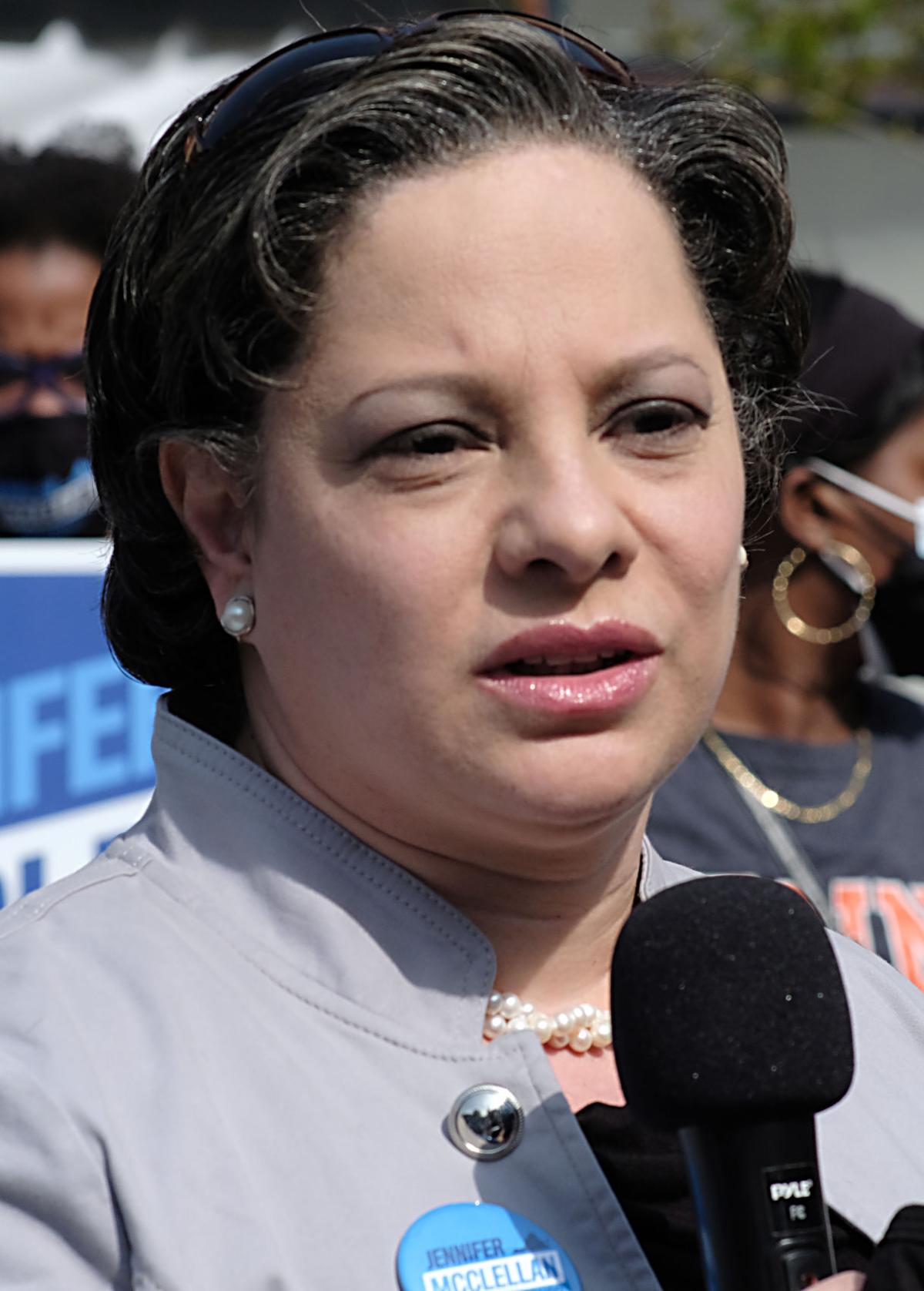 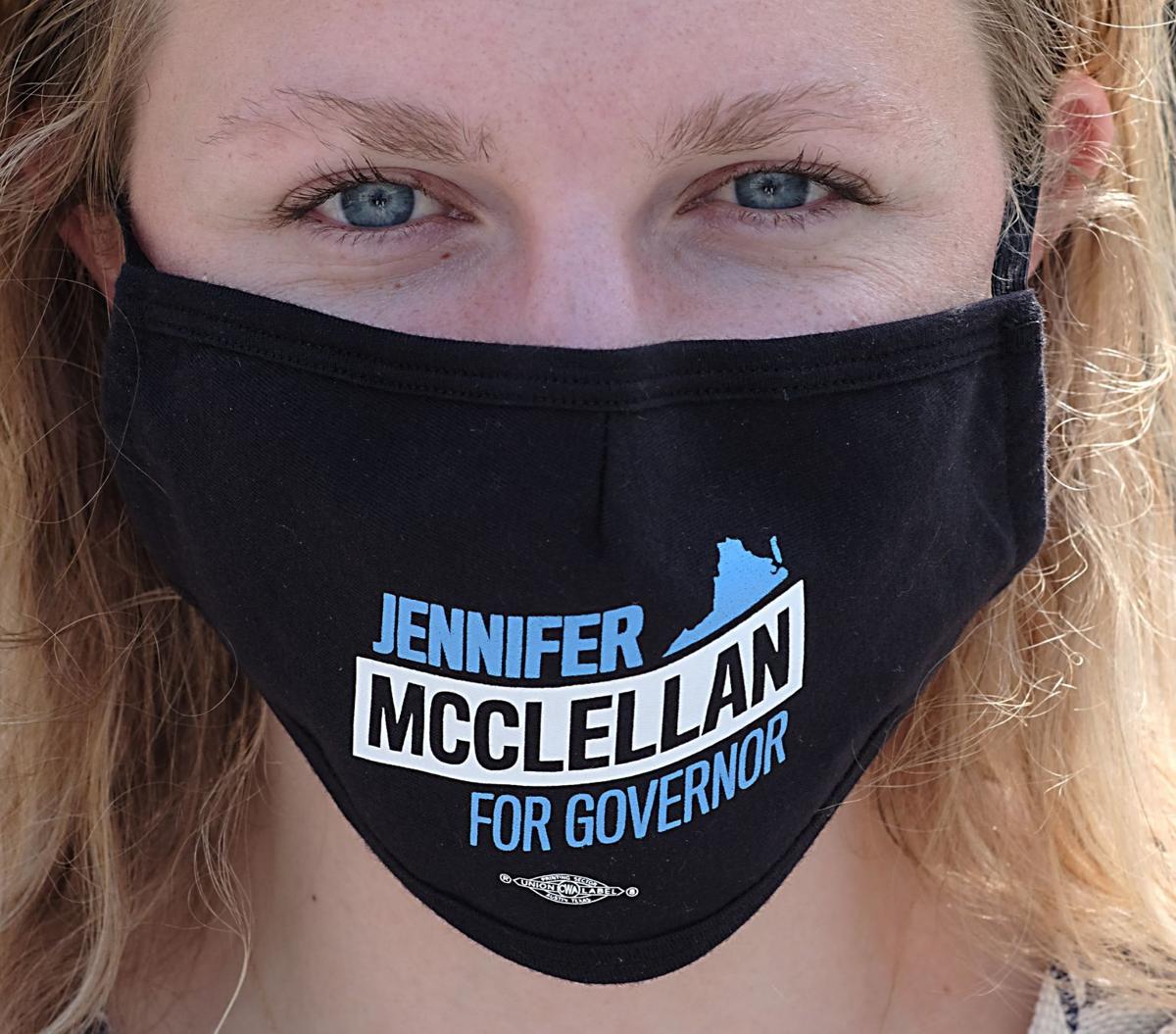 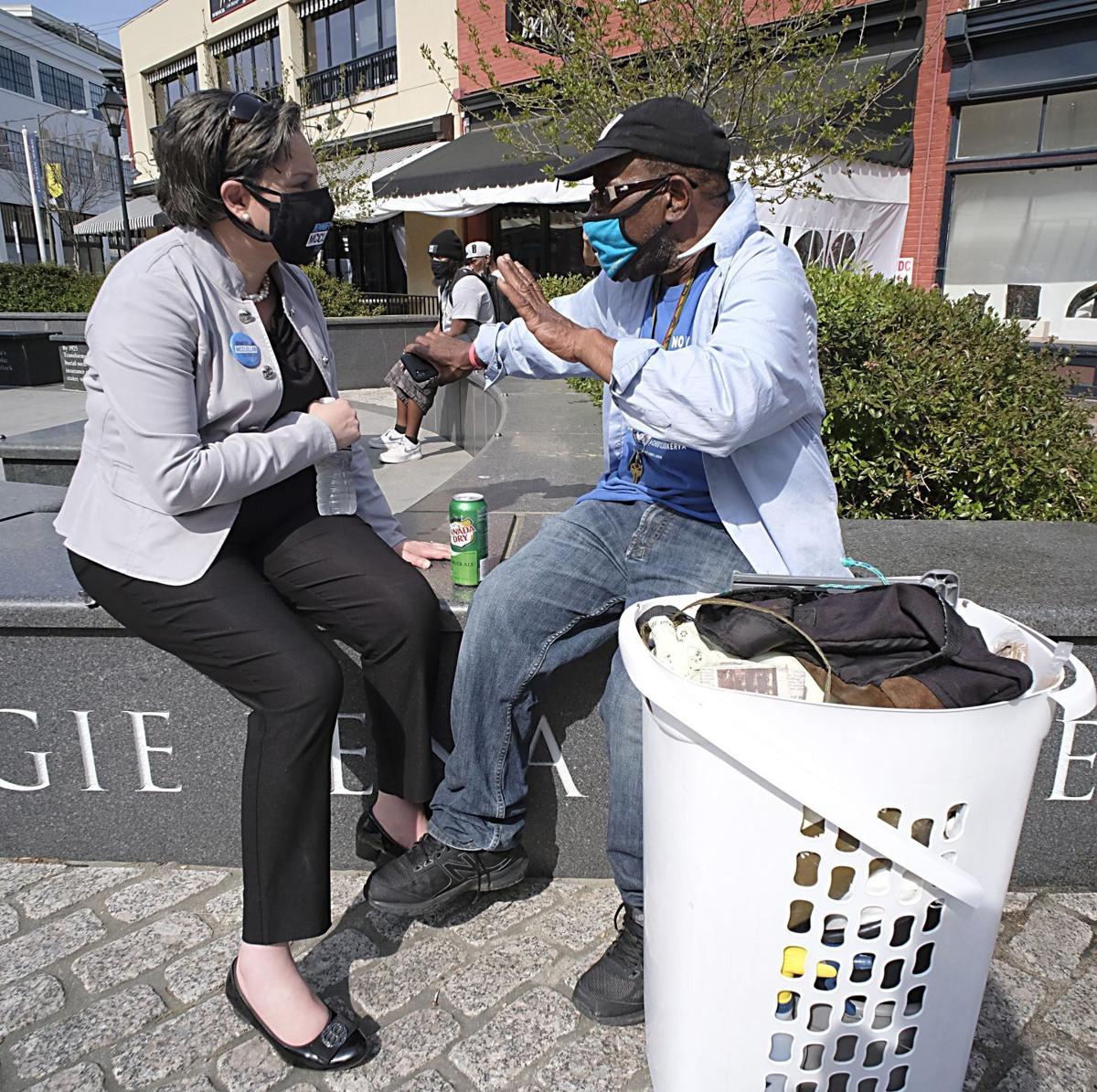 Sen. Jennifer McClellan, D-Richmond, left, speaks with Alphonso Washington, 68, who was sitting nearby following a press conference she called to discuss her gubernatorial campaign beneath the Maggie L. Walker statue in Richmond, VA Thursday, April 8, 2021. Washington asked her several questions about her plolicies. 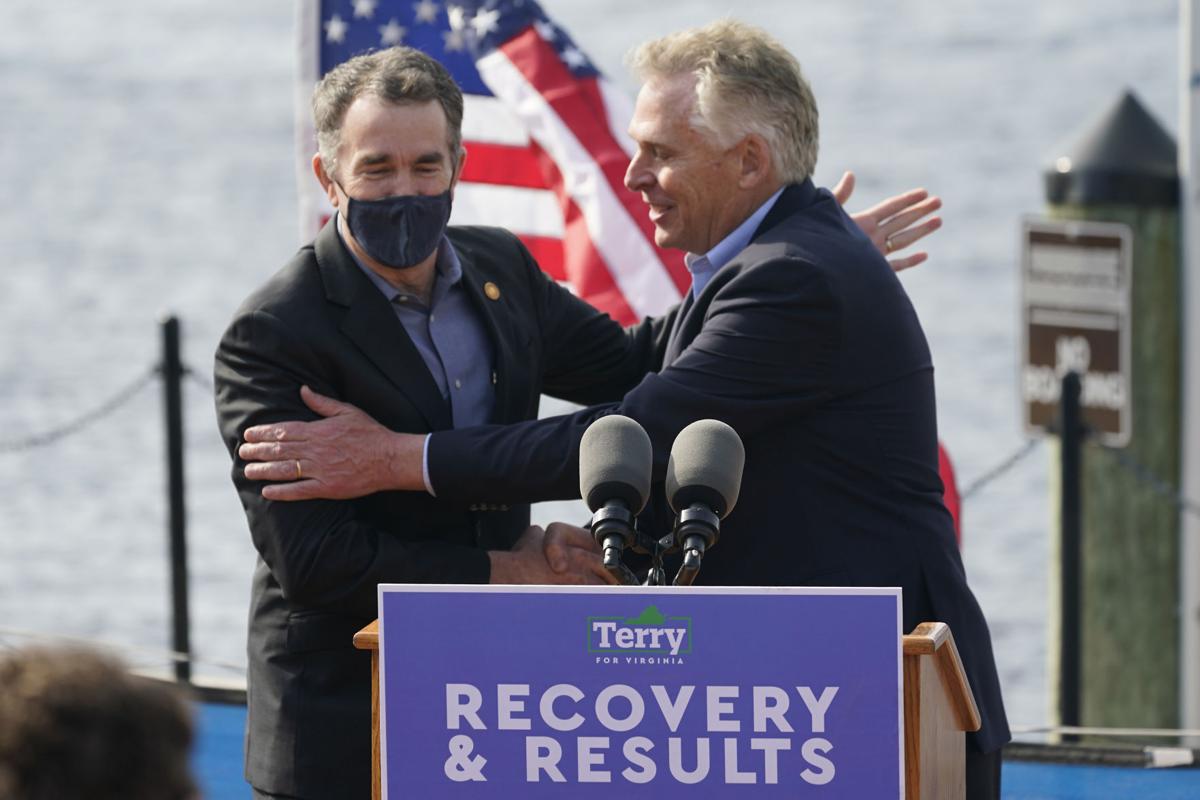 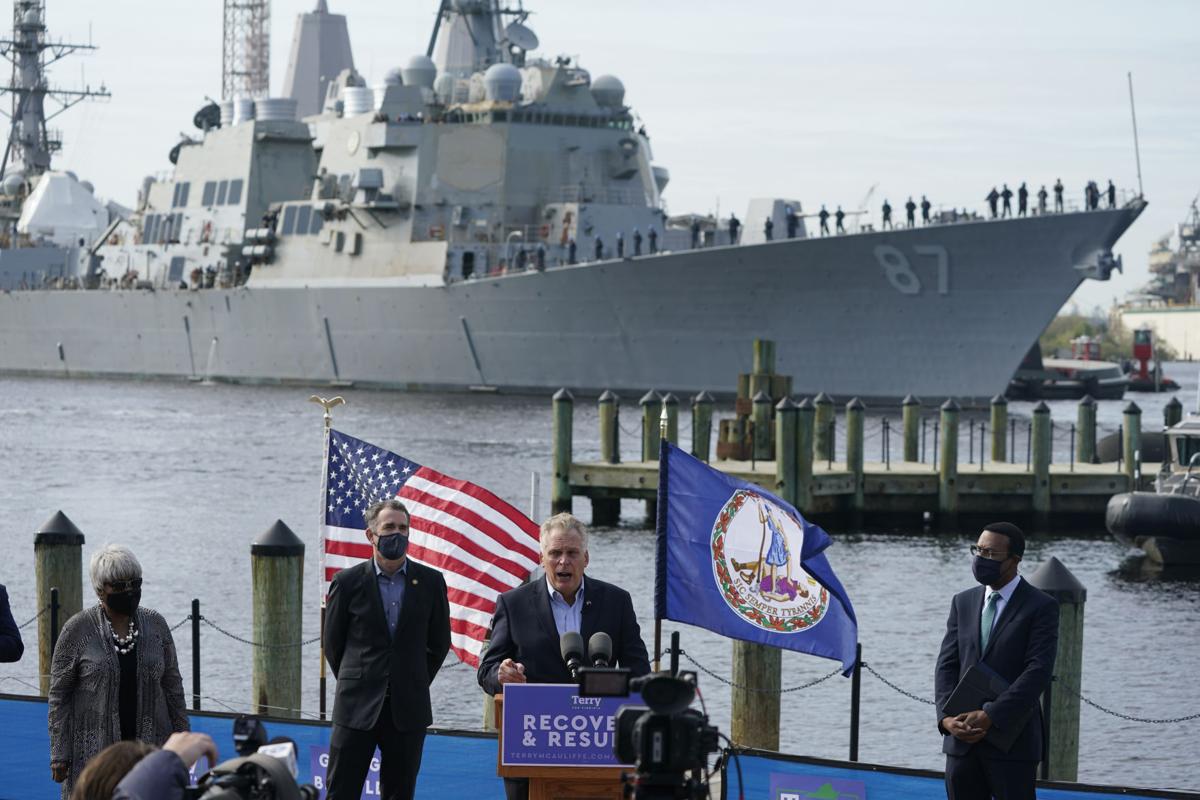 The USS Mason glided past the news conference in Norfolk where former governor and Democratic gubernatorial candidate Terry McAuliffe was speaking on Thursday. 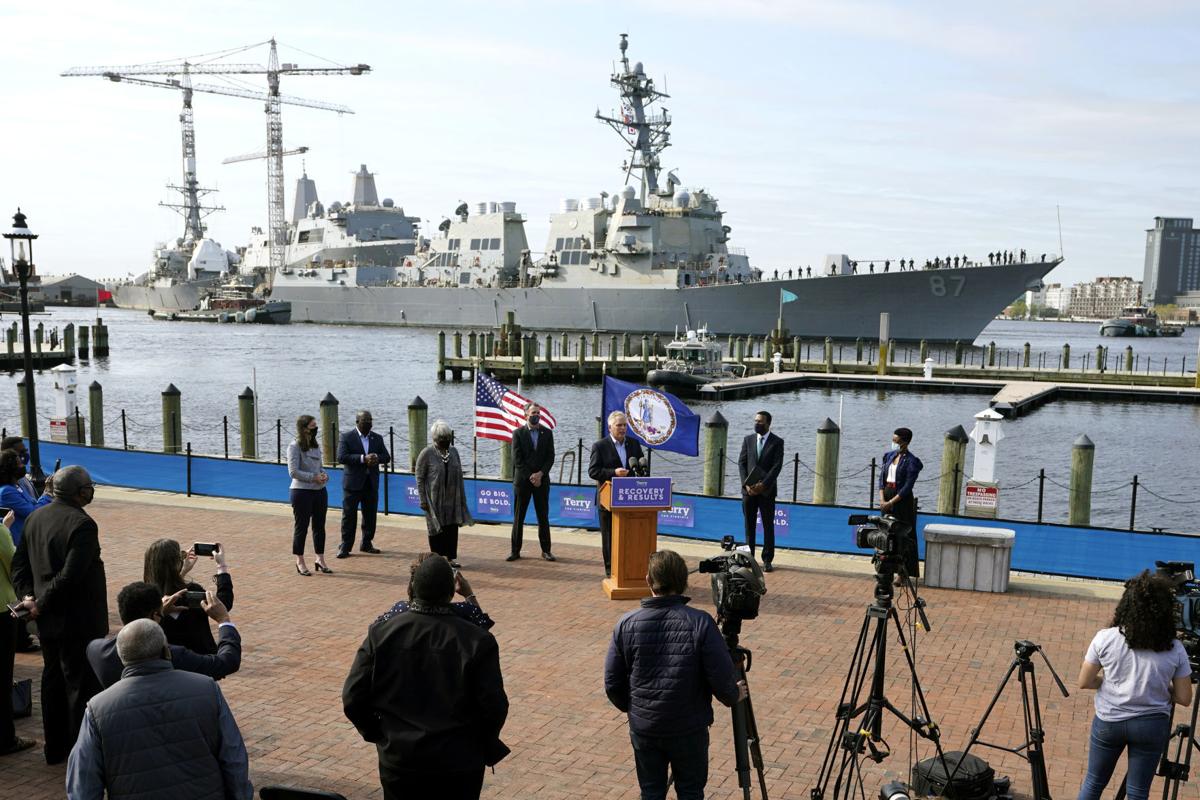 Gov. Ralph Northam on Thursday endorsed former Gov. Terry McAuliffe for governor, throwing his weight behind his predecessor two months ahead of the Democratic primary.

In backing the party’s perceived front-runner, Northam, who leaves office in January, said he hopes to “keep Virginia blue” and solidify and further the progressive changes the state has made during his four-year term. Virginia is the only state in which governors cannot serve consecutive terms.

Northam, who dedicated the remainder of his term to racial equity following the 2019 blackface scandal, backed McAuliffe in a contest in which three of the five Democratic candidates are African Americans and two of them would be the nation’s first female Black governor.

McAuliffe was among many state and national Democratic leaders who called for Northam’s resignation early in the 2019 scandal.

McClellan responded to news of Northam’s endorsement of McAuliffe with an afternoon news conference at Richmond’s statue of Maggie Walker, an entrepreneur and civil rights activist who was the first African American woman in the U.S. to charter a bank.

McClellan said Virginia needs a new perspective, which she said she would bring as a “Black woman, a working mother.”

“When he turned the keys over to me in 2017, he turned a new commonwealth over,” said Northam, asserting that he was able to build on McAuliffe’s successes.

Northam said McAuliffe started work that he continued — on bringing Amazon to Virginia, expanding Medicaid, and furthering investments in broadband services and key infrastructure improvements from the Port of Virginia to interstate highways.

“It’s important that we continue to build on the success that we’ve had over the last three years,” said Northam, citing investments in K-12 education and in historically Black colleges and universities, and changes in criminal justice reform, from repealing the death penalty to legalizing recreational use of marijuana for adults effective July 1.

Republican leaders in the General Assembly blocked McAuliffe’s efforts to expand Medicaid. Northam signed off on Medicaid expansion in 2018 after Democrats made a net gain of 15 seats in the 2017 House elections.

In Norfolk, McAuliffe credited Northam for his leadership during the pandemic and for helping create a more open and welcoming state. He said he wants to lead the effort to build the post-COVID economy and to further efforts on equity and criminal justice.

McAuliffe said 250,000 Virginians have regained the right to vote in the past eight years.

“We have been through the battles together,” he said.

“What we saw eight years ago was a right-wing state that businesses did not want to come to,” McAuliffe said. “Today, Virginia is a progressive state that everybody wants to come [to] and raise their family and get their children an education.”

McClellan said she found out about Northam’s decision after it had been made public.

“Northam said that we needed a governor who has experience. I’ve got more state government experience than all of my opponents combined,” said McClellan, who has served in the legislature since 2006.

McClellan criticized McAuliffe for taking “credit for my work” — referring to the legislation McClellan introduced this year, the Voting Rights Act of Virginia. She said his environmental policy plan “is built” on the Clean Economy Act, which McClellan championed in 2020.

Republicans have not won a statewide contest in Virginia since 2009, when Bob McDonnell led a GOP sweep for governor, lieutenant governor and attorney general.

Republicans will choose their nominee for governor among seven candidates in a May 8 convention.

One of the GOP candidates, former Speaker of the House Kirk Cox, R-Colonial Heights, issued a statement in which he cited McAuliffe’s 2019 condemnation of Northam. Cox also sought to link Northam and McAuliffe on the parole board scandal and on what Cox termed a slow response to COVID-19 under Northam, from school reopening to problems in administering unemployment benefits.

“If Virginians had any doubt about what they could expect from a Democrat in the Governor’s Mansion, Ralph Northam just eliminated it with his endorsement of Terry McAuliffe,” Cox said.

Entrepreneur Pete Snyder, another GOP candidate, said in a video posted to Twitter that “the fix is in” for the Democratic primary and that Northam and McAuliffe are “elbowing out an entirely new generation of talent in the Democratic Party.”

Senior royals walk in the Duke of Edinburgh's funeral procession

Schapiro: Less who you are, more where you're from

Guzman withdraws from lieutenant governor's race, will vie to keep her House seat

Del. Elizabeth Guzman, D-Prince William, conceding that “it takes money to reach voters,” on Saturday suspended her campaign for the Democrati…

Former Gov. Terry McAuliffe, who is running for a second term, raised $4.2 million in the first quarter of 2021, more than all of his Democrat…

Sen. Jennifer McClellan, a Democrat running for governor, spoke Thursday at Richmond’s statue of Maggie Walker. “Too many — all of our governors — have been men,” she said. “We have the opportunity to change that.”

Sen. Jennifer McClellan, D-Richmond, left, speaks with Alphonso Washington, 68, who was sitting nearby following a press conference she called to discuss her gubernatorial campaign beneath the Maggie L. Walker statue in Richmond, VA Thursday, April 8, 2021. Washington asked her several questions about her plolicies.

The USS Mason glided past the news conference in Norfolk where former governor and Democratic gubernatorial candidate Terry McAuliffe was speaking on Thursday.