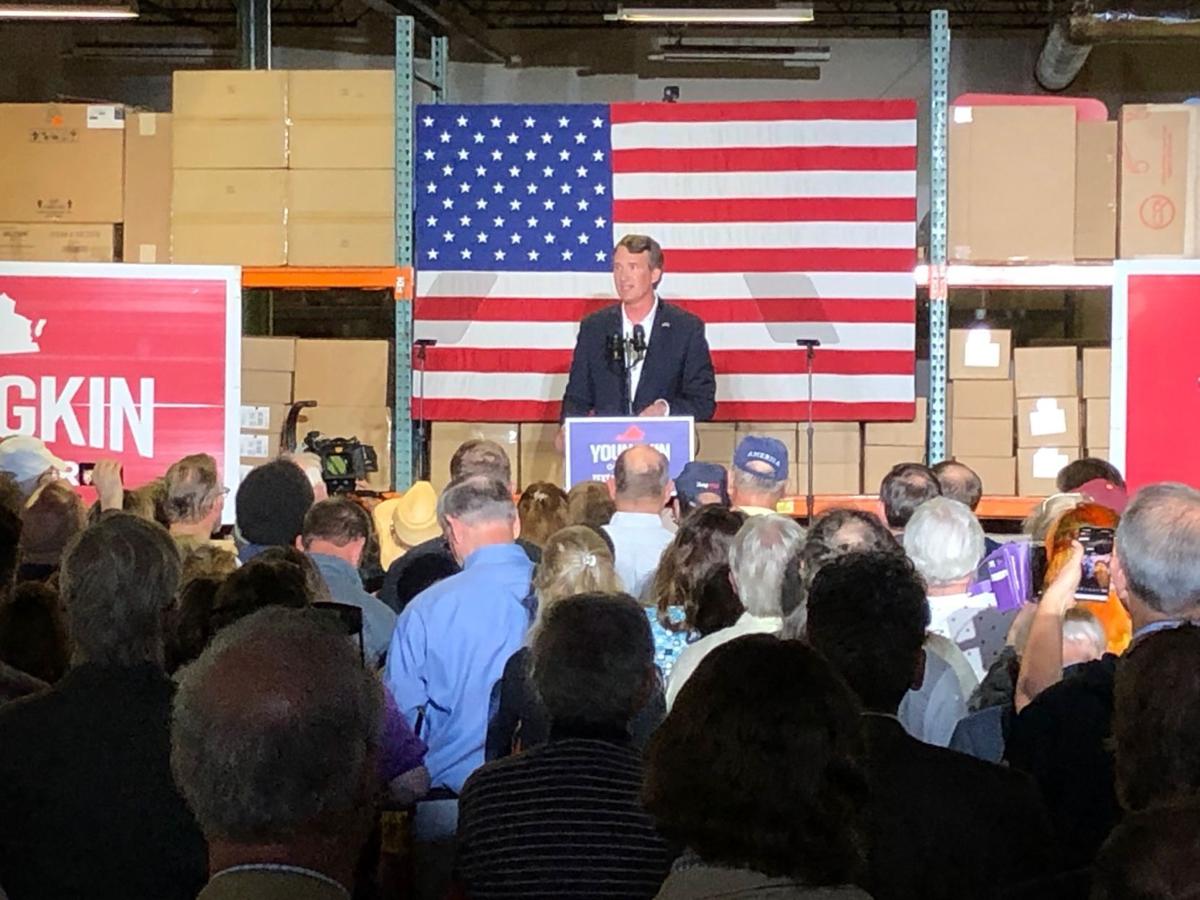 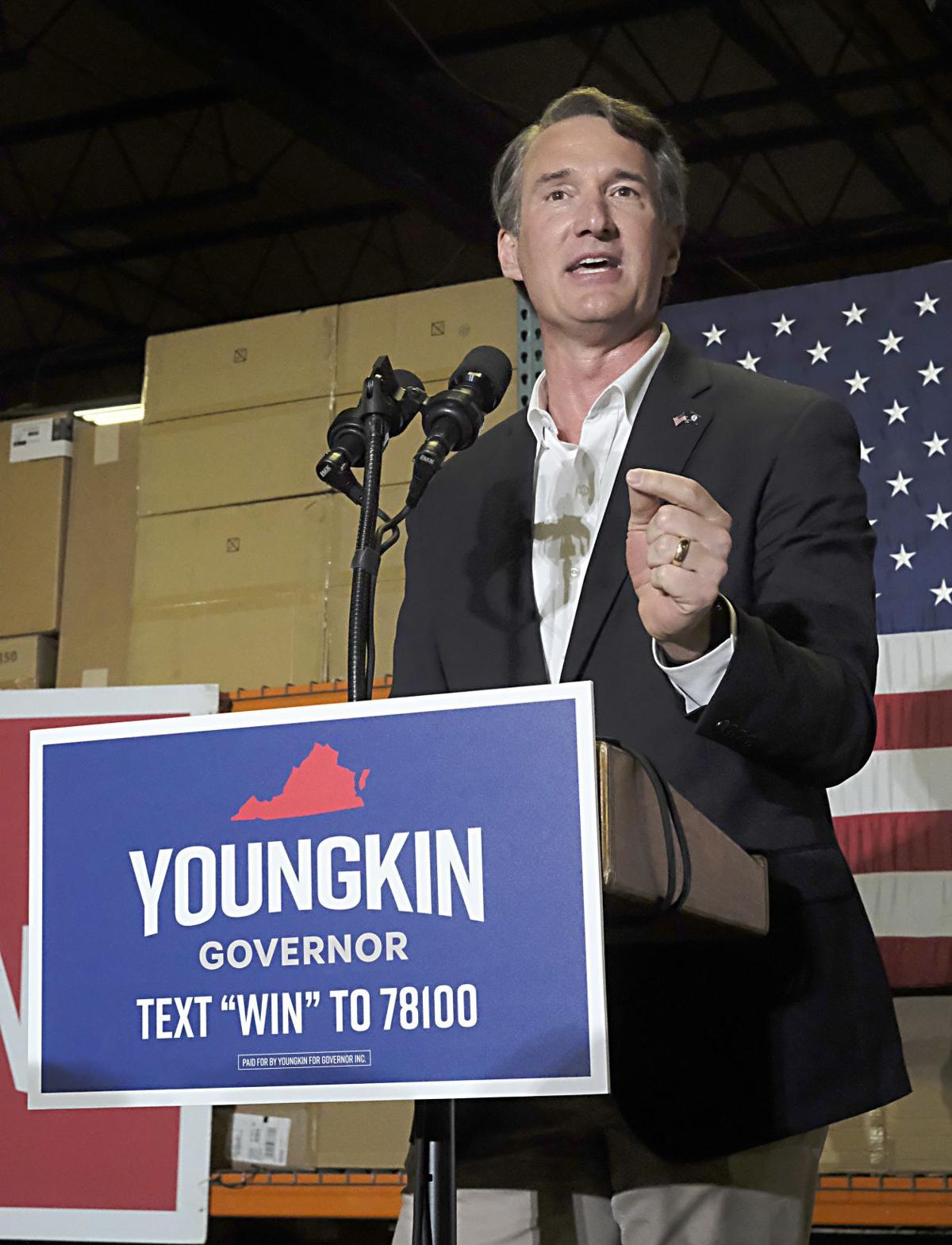 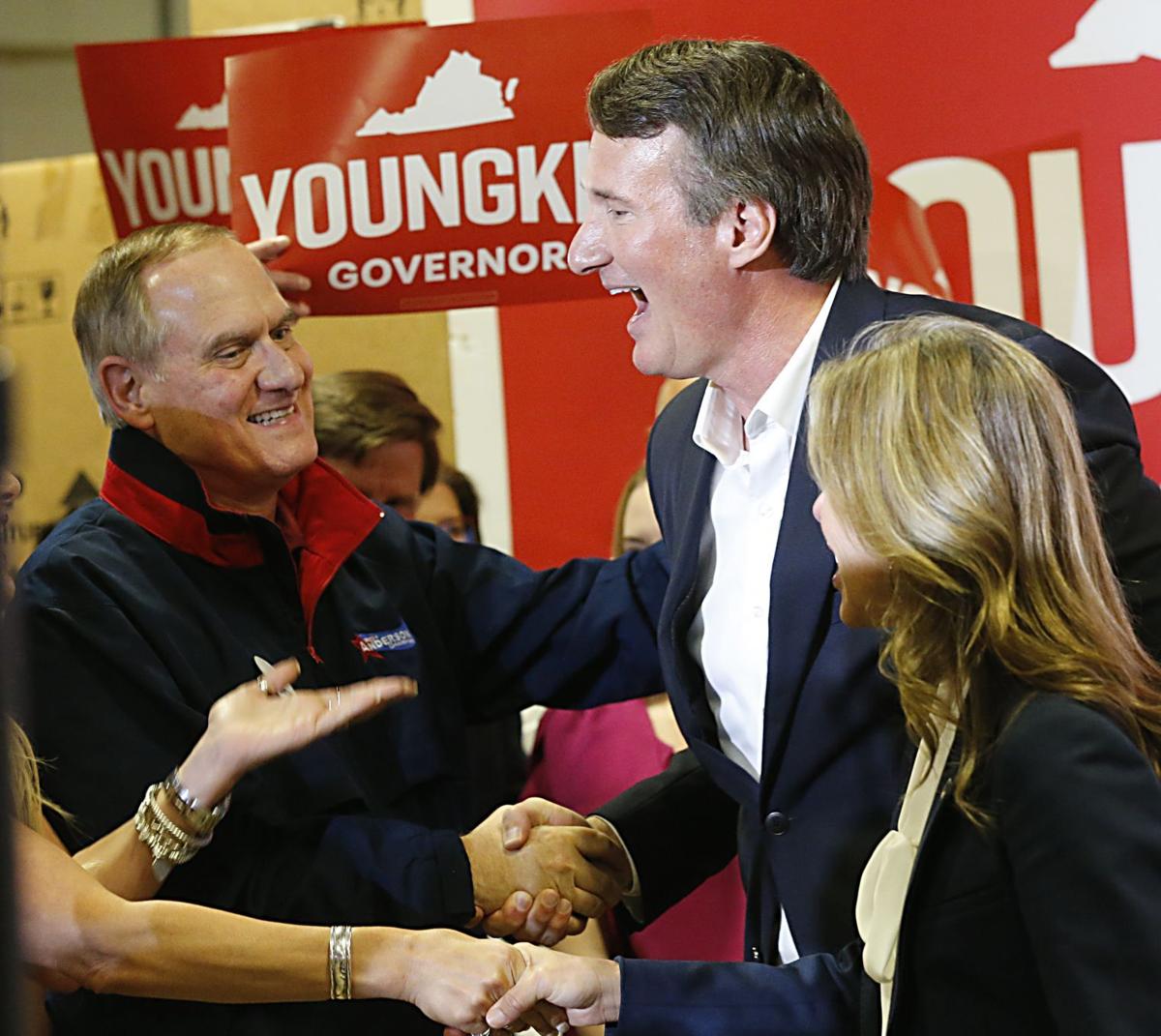 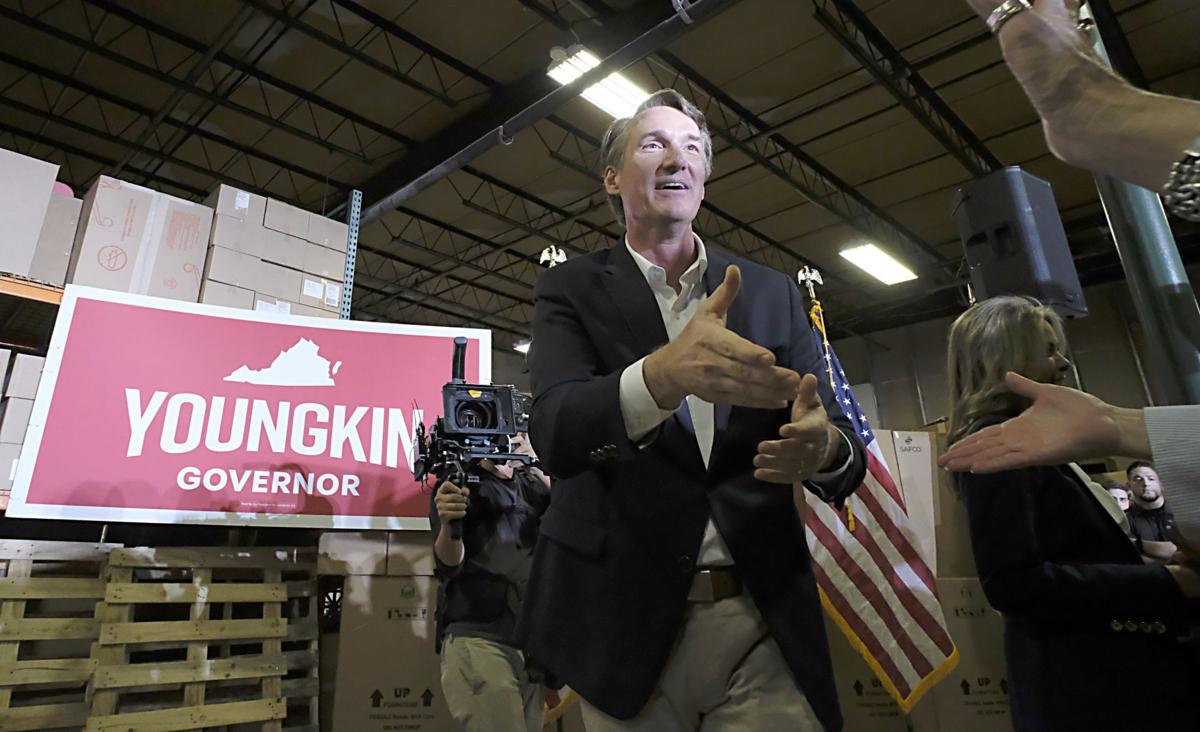 GOP gubernatorial nominee Glenn Youngkin greeted supporters at a campaign rally in Richmond on May 11, 2021. 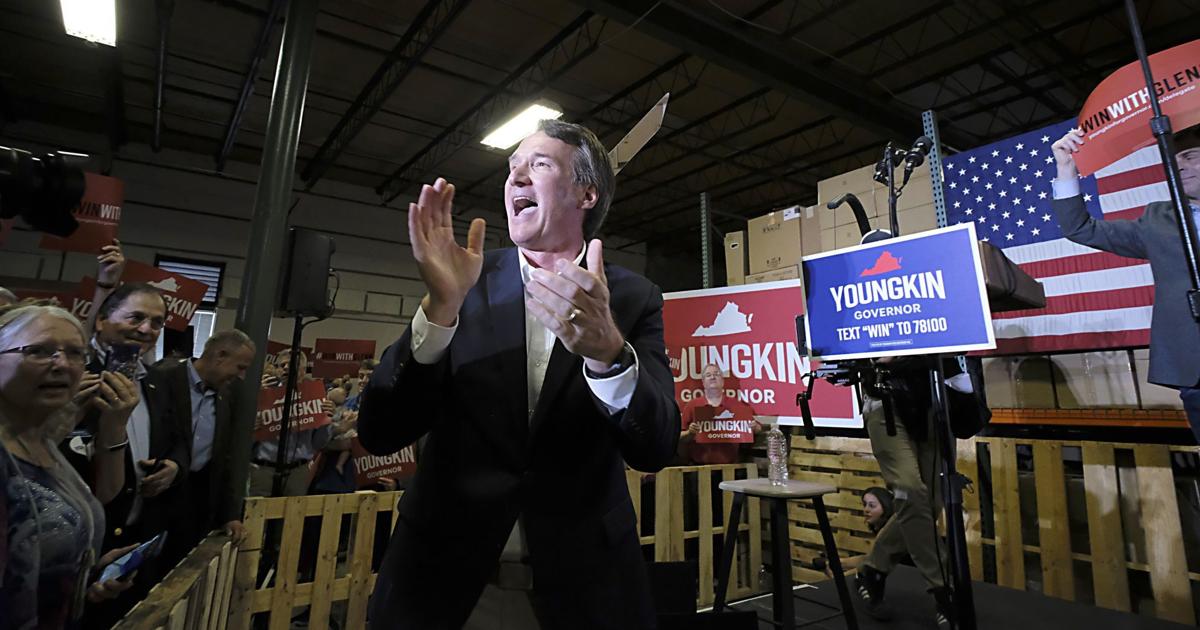 In an aggressive speech that marked the beginning of his general election campaign for governor, GOP nominee Glenn Youngkin said in Richmond on Tuesday that Democrats have driven Virginia “into the ditch” and “so far left it’s fallen off the map.”

Youngkin said that as governor, he would move to reduce individual and business tax rates, protect a state law that allows workers to opt out of paying dues to labor unions, and fight the teaching of systemic racism in the state’s public schools.

“Terry McAuliffe and his sidekick, [Gov.] Ralph Northam, have been pursuing a politics of extremism and political division,” Youngkin said at a warehouse belonging to Ball Office Products, a local business. “Elections have consequences. And the consequences for Virginians for the last eight years have been crushing.”

The crowd swelled to more than 200 people even as the state’s indoor social gathering limit remains at 50 people. The limit will rise to 100 people May 15.

Youngkin, who entered the Virginia political scene late last year as a little-known multimillionaire, clinched the GOP nomination for governor late Monday. Youngkin, 54, is the former co-CEO of The Carlyle Group and lives in Fairfax County.

Former President Donald Trump, who declined to weigh in on the nomination fight, swiftly endorsed Youngkin on Tuesday, calling the former CEO a “patriot.” Trump lost Virginia by more than 10 points in the 2020 presidential contest.

“Glenn is pro-Business, pro-Second Amendment, pro-Veterans, pro-America, he knows how to make Virginia’s economy rip-roaring, and he has my Complete and Total Endorsement!” Trump wrote in a statement posted on his website. He called former Gov. Terry McAuliffe, the Democratic front-runner, “the Clintons’ bagman.”

Youngkin did not mention Trump in his speech Tuesday night.

Virginia is the only state with a competitive race for governor this year. The contest is expected to attract significant spending and attention as a test of the post-Trump era. In Virginia, it will be a referendum on Democratic power, in particular, the party’s handling of the COVID-19 pandemic.

Youngkin during his speech on Tuesday said Democrats have “dragged” the state “far away from our shared values.”

Youngkin, who campaigned as a devout Christian, said he will oppose laws that allow women to seek abortions. “We will protect the life of every Virginia child, born and unborn,” he said.

In a call with reporters Tuesday, Democratic Party leaders described Youngkin as extreme, predicting that Virginia voters would reject him as they did Trump in 2016 and 2020.

“We have a positive message we’re going to run on, but make no mistake, every step of the way, we’re going to point out the right-wing extremism of Glenn Youngkin,” said Susan Swecker, the chair of the Democratic Party of Virginia.

Republicans have not won a statewide election in Virginia since 2009, but Youngkin’s wealth is thought to pose a formidable challenge to Democrats.

“Virginia voters are savvy, smart and thoughtful. They’re not going to fall for an infusion of money promoting lies and distortion,” Swecker said.

Youngkin said Tuesday that he opposes ending qualified immunity, a state policy that restricts lawsuits for damages against police officers who violate a citizen’s civil rights. All of the Democratic candidates have said they support ending it. “I will give our law enforcement heroes the resources, the support, the protection they need to put Virginia at the top of this nation when it comes to keeping our community safe.”

Youngkin, who launched his campaign with a focus on election integrity and has refused to say President Joe Biden was duly elected, vowed to repeal a law the Democratic legislature passed that exempts voters from having to show a government-issued photo I.D. to cast a ballot

Youngkin grew up in Bon Air before his family moved to Virginia Beach. He attended Norfolk Academy, a private school, and earned a scholarship to play basketball at Rice University in Texas. He studied mechanical engineering and managerial studies at Rice, and went on to get an MBA from Harvard University. He lives in Great Falls with his wife, Suzanne; they have four children.

GOP gubernatorial nominee Glenn Youngkin greeted supporters at a campaign rally in Richmond on May 11, 2021. 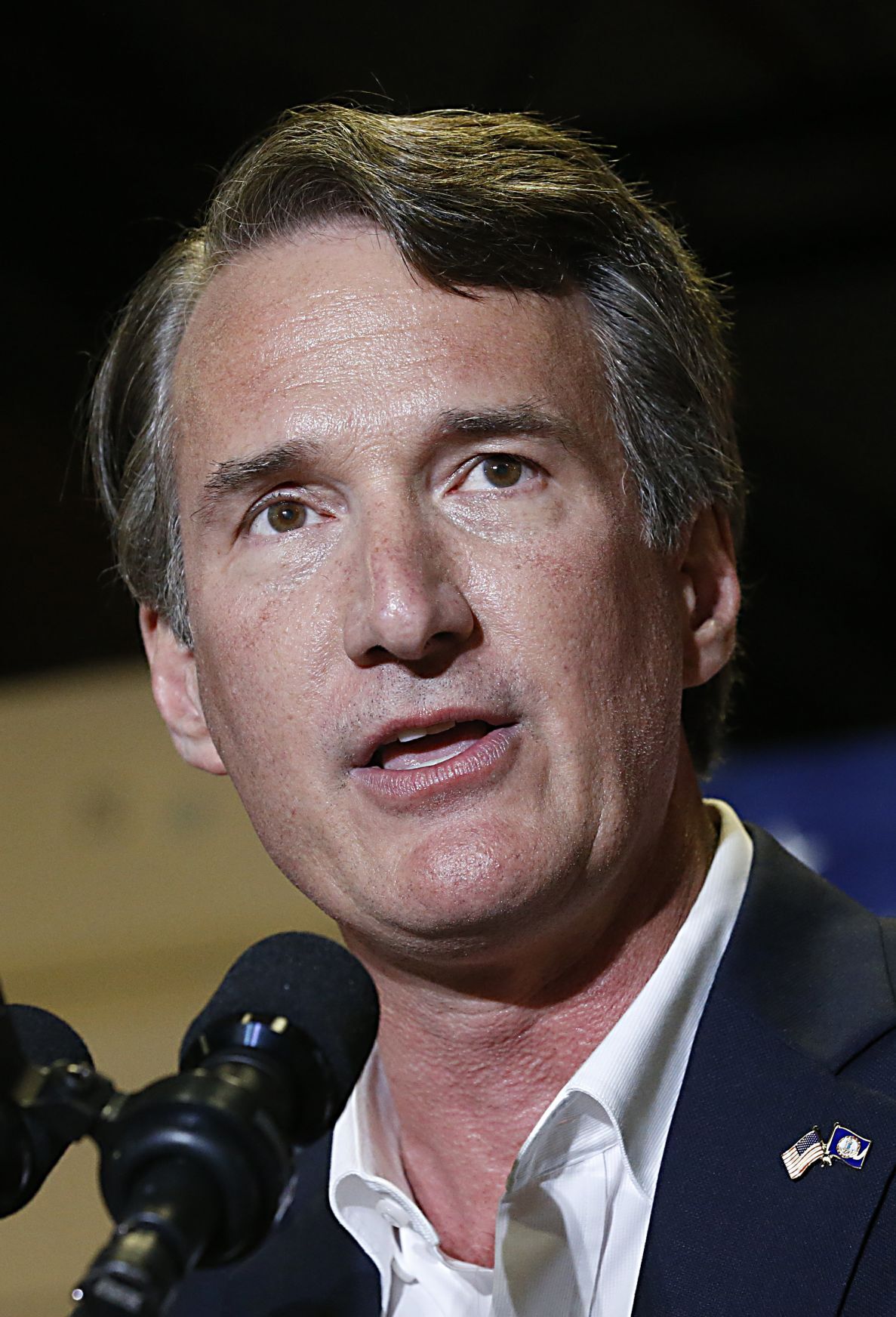