Gov. Glenn Youngkin began signing nine executive orders and two directives in his conference room inside the state Capitol on Saturday. Among other things, the actions end statewide mask mandates in public schools and rescind the statewide COVID-19 vaccine mandate for state workers. 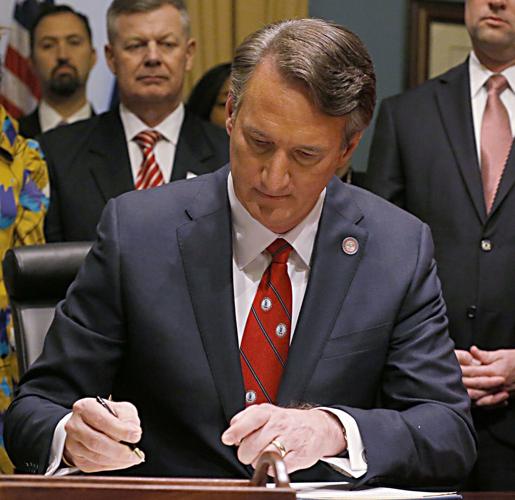 On his first day in office, Gov. Glenn Youngkin signed an executive directive saying state employees are no longer required to be vaccinated.

Instead of a brass key to a door lock, outgoing Gov. Ralph Northam handed the incoming governor a plastic card — punctured by tooth marks from his Labrador puppy, Pearl.

“Did the dog eat it?” Youngkin asked incredulously after he and his wife, Suzanne, joined Northam and first lady Pam Northam in the Old Senate Chamber in the Capitol for the traditional passing of the key from one governor to the next.

Northam responded, “He tried to eat it.”

“I can promise you it still works,” Northam told Youngkin minutes before the governor-elect took the oath of office, steps away on the South Portico of the Capitol.

Two hours later, Youngkin walked back into the historic building as Virginia’s 74th governor, surrounded by his executive protection unit. He had given his inaugural speech and reviewed a parade around the Capitol in his honor.

“What a morning!” he exclaimed before heading to the governor’s office upstairs, where he was preparing to sign a series of executive orders and directives to begin carrying out his “day one” agenda.

A day of celebration and executive action was to culminate with a casual-dress party at Richmond’s Main Street Station in lieu of the traditional black-tie inaugural ball.

It was a morning of respectful tradition, as a Democratic governor welcomed his Republican successor and joined with seven other former governors to welcome Youngkin and say farewell to Northam.

“Well, this is a heck of a group,” Youngkin exclaimed as he walked into the Jefferson Room to meet with Democrats Chuck Robb, Doug Wilder, Mark Warner and Tim Kaine, and Republicans George Allen, Jim Gilmore and Bob McDonnell.

McDonnell, the last Republican to serve as governor, replied, “Welcome to the group!”

After posing with eight of Virginia’s nine other living governors for ceremonial photographs, Youngkin told them, “Being here today is what ‘one Virginia’ is all about.”

Former Gov. Terry McAuliffe, a Democrat whom Youngkin defeated in November, did not attend but sent his regrets.

McAuliffe, who preceded Northam as governor, said on Twitter that he and his wife, Dorothy, had hoped to attend “but are quarantining due to a close COVID contact in the interest of health and safety.”

“We wish Glenn Youngkin and the new administration well today as they start their term,” the 72nd governor tweeted.

Two other former governors were sadly missed at the quadrennial reunion.

Linwood Holton, elected in 1969 as Virginia’s first Republican governor since Reconstruction, and Gerald Baliles, who served between Robb and Wilder, had died since the governors gathered in the same room four years earlier for Northam’s inauguration.

“He was in my heart,” Anne Holton, the former governor’s daughter and Kaine’s wife, said later. “Both he and Jerry [Baliles] were here.”

Most of the former governors’ wives joined their husbands for a group picture. Lynda Robb was absent, less than a month after a fire destroyed the couple’s home in McLean. She and the former governor (and U.S. senator) escaped, but were injured in the blaze.

Northam and the former first lady left the Capitol minutes after Youngkin took the oath of office. “See you on the river,” he told a news reporter as he left with a security escort to drive them to their home in Norfolk.

The former governor said he is ready for life out of office. A pediatric neurologist, he is already scheduled to see at least 10 patients on Monday at his medical practice in Norfolk.

Northam said in an interview that he does not plan to be involved in Democratic politics, but wants to advocate to eliminate the disparity in access to health care, based on race and income.

He also plans to volunteer with organizations to preserve the Lynhaven and Elizabeth rivers, a cause he shares with his wife, along with promoting early childhood education.

Pam Northam wore a pin featuring the state seal circled, which Senate Clerk Susan Schaar had given her as a memento of four memorable — sometimes turbulent — years in the Executive Mansion.

“We are so excited for you and your family,” Northam told the Youngkins during the key exchange, held beneath portraits of Captain John Smith and Pocahontas. “Four years will really go by fast.”

Youngkin responded that he and his wife were “deeply, deeply gratified” by the warm welcome they received from the outgoing governor during the transition.

“The entire commonwealth sees the love in your heart,” he told his predecessor.

The two men had collaborated personally in preparing the new administration for a state of emergency from a winter storm expected to sweep through Virginia on Sunday.

Northam said Youngkin joined him in a meeting on Friday with state officials preparing for potentially hazardous weather, less than two weeks after a snowstorm stranded thousands of motorists, including Kaine, for more than a day on Interstate 95.

Shawn Talmadge, a former deputy secretary of public safety under Northam, will serve as Youngkin’s coordinator for the Virginia Department of Emergency Management at the heart of the storm response.

Northam said he was happy that Youngkin would “keep some institutional knowledge in these agencies. It’s really important.”

Outside the Capitol, thousands of Virginians gathered for the inauguration ceremony in weather that steadily improved from briskly cold to seasonably cool.

The day was memorable for Republicans, including former Del. Steve Landes, R-Augusta, now clerk of the Augusta County Circuit Court.

“It’s great to see old friends,” said Landes, who retired in 2019 to run for clerk. “As a Republican, it’s great to have all three [statewide] offices again.”

It was especially gratifying for Republican Party Chairman Rich Anderson, a former delegate from Prince William County who was defeated during a Democratic electoral wave in 2017 and lost a bid to regain his seat two years later.

“It’s a great day to be chairman of the party,” Anderson said from the grandstand overlooking the inaugural parade. “It’s all about the timing.”

Anderson, elected party chairman in August 2020, took over a state party in disarray, stung by a series of electoral defeats. Last year, Republican activists fought publicly over the best way to nominate candidates for governor, lieutenant governor and attorney general during the COVID-19 pandemic, which prevented them from meeting in a conventional convention.

Now, Anderson said, “The party is united, solid” and looking forward to midterm elections in November for Virginia’s 11 congressional seats.

Spanberger is running for a third term this year in a newly drawn district that no longer includes her home in western Henrico County but is now anchored in eastern Prince William and the Fredericksburg area.

She was attending her first inauguration of a Virginia governor, accompanied by her husband, Adam.

“It’s the peaceful transition of power,” said Spanberger, who was trapped in the House of Representatives chamber a year ago when a mob tried to disrupt the certification of the 2020 presidential election. “That’s the way it should be.”

Behind the scenes with Bob Brown: Former Va. governors meet with Youngkin, Youngkin’s procession to inauguration

Behind the scenes with Bob Brown: Former Va. governors meet with Youngkin, Youngkin’s procession to inauguration

Gov. Glenn Youngkin began signing nine executive orders and two directives in his conference room inside the state Capitol on Saturday. Among other things, the actions end statewide mask mandates in public schools and rescind the statewide COVID-19 vaccine mandate for state workers.

On his first day in office, Gov. Glenn Youngkin signed an executive directive saying state employees are no longer required to be vaccinated. 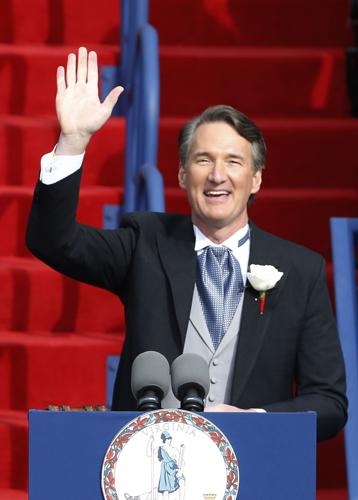