President Donald Trump proclaimed last year that Virginia would “come back HOME Republican in 2020!” — but less than two months from Election Day, the president’s path to re-election doesn’t appear to include the Old Dominion.

Here, polling suggests a comfortable advantage for former Vice President Joe Biden, nixing the traditional swing state from the list of heavily trafficked battlegrounds in the fight for the White House.

Aside from national ads, neither campaign has yet invested in TV or digital ads in Virginia, and neither candidate has personally campaigned in the state during the general election, amid a less dynamic campaign season due to the pandemic.

A poll by Roanoke College that surveyed likely Virginia voters from Aug. 9 to Aug. 22 reported Biden up by 14 points at 53% to Trump’s 39%. A July poll by Virginia Commonwealth University showed Biden up by 11 points, 50% to 39% among likely voters.

They’re not figures Biden surrogates will publicly tout as they urge voters to cast ballots ahead of the Nov. 3 election — as early as possible and through any of the state’s many options — in an effort to defeat Trump.

“Don’t get comfortable. If we learned anything from 2016, it’s that you can’t rely on polling,” said Del. Lashrecse Aird of Petersburg, a prominent Biden campaign surrogate. “You have to fight as though you’re in the fight of your life. Otherwise, we’ll end up back in 2016.”

Trump’s Virginia operation warns against discounting the president’s highly energized base, which helped deliver his upset win in 2016 in some states thought to favor Hillary Clinton, such as Pennsylvania, Michigan and Wisconsin.

Clinton claimed the vote in Virginia by 5 percentage points over Trump, who nevertheless carried six of the state’s 11 congressional districts in 2016.

Democrats have carried Virginia in three straight presidential elections after Republicans won the state’s electoral votes in every presidential contest from 1968 through 2004.

The Trump campaign here says that despite polling numbers, their supporters are motivated to react at the ballot box to unrest over police brutality in Richmond and elsewhere, as well as Democratic policies advancing through the statehouse involving police.

“The polling data seems to indicate the Democrats have an advantage coming into the cycle,” said Rich Anderson, chairman of the Republican Party of Virginia. “But, I have never, in a dozen years, seen such high energy in the state of Virginia by Republicans. It’s a stratospheric level of focus and activity.”

According to the firm Advertising Analytics, which closely tracks TV and digital spending by the campaigns, neither candidate was going on the air in Virginia at the turn of Labor Day weekend — when campaign season takes off in earnest.

(The site reported Trump’s campaign spent $92,000 in the Washington, D.C., market, which may touch parts of solid-blue Northern Virginia.)

The Biden campaign, however, in August announced a $280 million ad buy through the fall in 15 states that includes English and Spanish ads in Virginia.

According to the website Medium Buying, which tracks campaign advertising, Biden ads are expected to go live in Virginia on Oct. 6. Advertising Analytics reported that the Biden campaign has pre-booked $1.44 million in ads in Virginia.

Their report showed no pre-bookings in Virginia by Trump.

Trump’s airwaves silence in Virginia could be the product of a campaign-wide “cash crunch” reported by The New York Times, which described in an article Monday heavy, early spending by the campaign that had resulted in the current belt-tightening.

When it comes to online grassroots presence, the GOP has an advantage, said Tom Sherwood, a longtime Virginia and Washington political reporter who is now an analyst with D.C. radio station WAMU.

“President Trump has an active and efficient web presence. It’s unclear national Democrats can match him,” he said.

So far, neither candidate has campaigned in person in Virginia during the general election. The president has flown over Virginia three times in the past three weeks on his way to North Carolina campaign events, trying to win the vote in a key battleground.

Biden, who has been much more reticent to appear in person as COVID-19 continues to spread, has nevertheless traveled to Pennsylvania, Wisconsin and New York in recent weeks.

Before the COVID-19 crackdown, Biden campaigned in Norfolk on March 1, fresh off of his victory in the South Carolina primary. Trump visited Norfolk on March 28 as the USNS Comfort headed to New York to help in the fight against the pandemic.

The president has made six campaign stops this year in North Carolina.

Anderson, who was recently elected chairman of the state GOP on a platform focused on re-electing Trump, said Trump campaign materials remain in high demand across the state. Trump yard signs, he says, are always in short supply.

The enthusiasm for Trump among his base is sometimes on display in Richmond. When a group gathered to call for the lifting of public restrictions as the pandemic raged on, many had Trump campaign flags flying from the back of their trucks.

Those same protests, Trump surrogates here say, are helping motivate conservative voters to the polls. Anderson said that many voters see Democrats’ response to the protests, including police reform legislation in the General Assembly, as “anti-law enforcement and pro-criminal.”

Samantha Cotten, a regional spokesperson for the Trump campaign, said it’s an issue the campaign is highlighting in Virginia.

“People want law and order in their communities. And President Trump is the candidate of law and order,” Cotten said.

An immediate job facing the president elected in November is containing COVID-19 and managing the economic impact of the pandemic — which has claimed nearly 190,000 lives. In Virginia, the virus’ death toll is just over 2,700.

The Roanoke College poll found that a majority of Virginians — 58% — disapprove of the way Trump is handling his job.

“At the ballot box, people will judge what Trump has done and not done,” Sabato said. “That has a lot to do with their party ID, but the issue also is driving the segment of the electorate that could be called ‘leaners,’” — people with loose party affiliation.

“It’ll all depend on how they interpret the number of the deaths and cases,” Sabato said.

Biden’s message, spread here by a campaign largely organizing online, has been that he is a statesman and healer — a seasoned leader who can bring peace in a time of chaos.

“Most people have seen the lack of leadership. They want statesmanlike leadership, compassion and moving with a sense of urgency to offer relief,” Aird said.

Former Gov. Terry McAuliffe, a prominent Biden supporter who is weighing another run for governor, said Virginia isn’t a “true battleground” this cycle, but it’s “a state you can never take for granted.”

The campaign has boosted prominent Biden supporters in the state through online parties and town halls, as well as no-contact drop-offs of campaign literature.

“There are people who said, ‘Hillary [Clinton] is going to win, so I’m not going to vote.’ Then they woke up to a nightmare,” McAuliffe said. “We’re not going to do that this time.”

McAuliffe said his efforts right now are focused on making sure voters are registered and motivated to vote. A wide margin in Virginia and nationally, he said, would be all the more important in a year when Trump has repeatedly raised questions about the legitimacy of the electoral process.

The state’s shifting demographics — a growing Asian American and Hispanic electorate, as well as growth in the state’s city-centers — are expected to benefit Biden as they have helped Democrats up and down the ballot during Trump’s tenure.

While continuing to sweep statewide elections, Democrats have taken control of the state legislature and Virginia’s U.S. House delegation.

Given the racially and culturally diverse field of Democratic presidential hopefuls, Aird acknowledged Biden’s nomination disappointed many Democrats, particularly voters of color, who felt a “lack of affirmation that we can lead.” She said Harris’ addition to the ticket has re-energized a large portion of that segment.

In the end, she said, the issue that will drive most voters to the polls to support Biden is a desire for stability in a year that has brought everything but.

“People want the chaos to stop, they want equality and fairness, they want healing to begin,” Aird said. “Right here, especially in Richmond, people want peace and healing in the commonwealth. When I’m talking to voters, I’m pulling on those strings.”

In his first campaign appearance in Virginia this year, President Donald Trump told the state’s voters Friday night that only by voting for hi…

Shawn Calaman wonders why Virginia first lady Pamela Northam was allowed to tour the preschool his son attends when parents haven’t been able to enter the building since March.

In their first debate, Sen. Mark Warner, D-Va., and Republican challenger Daniel Gade found themselves at odds Wednesday night on the federal …

Rep. Donald McEachin, D-4th, and Republican challenger Leon Benjamin are both ordained African American ministers who have one other thing in …

Gov. Ralph Northam is throwing a lifeline to Virginia’s public colleges and universities, which would save $300 million over the next two year… 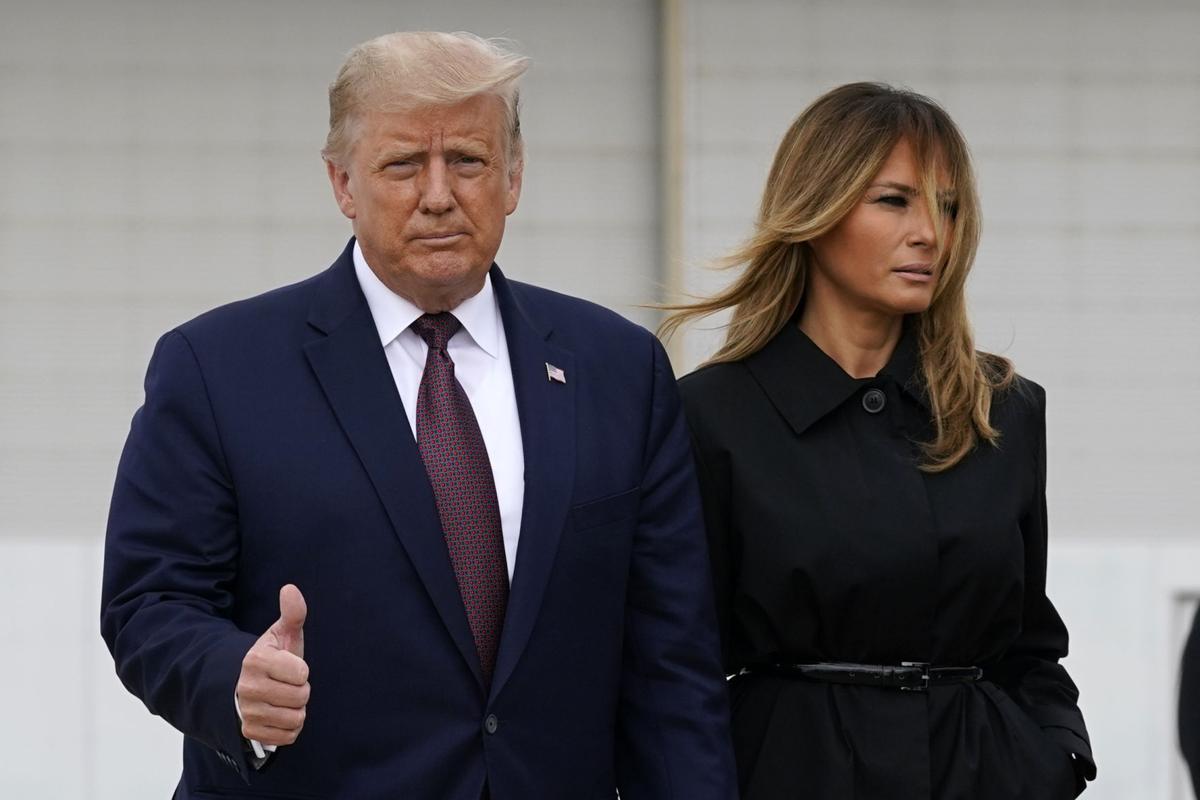