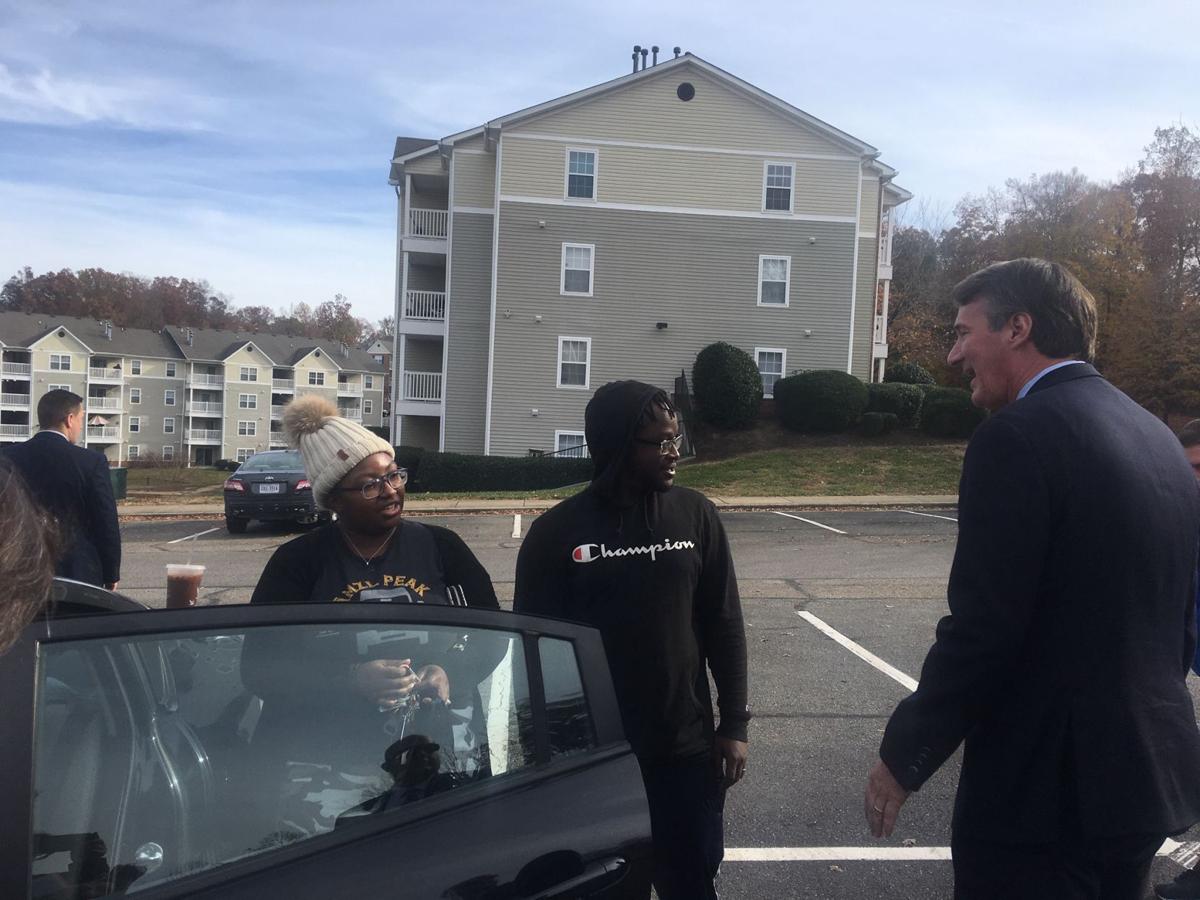 Gov.-elect Glenn Youngkin took a walking tour Saturday at The Bend at 4800 apartments in Chesterfield, where he greeted Octavia Perrin (left) and Devin Harrison (center). 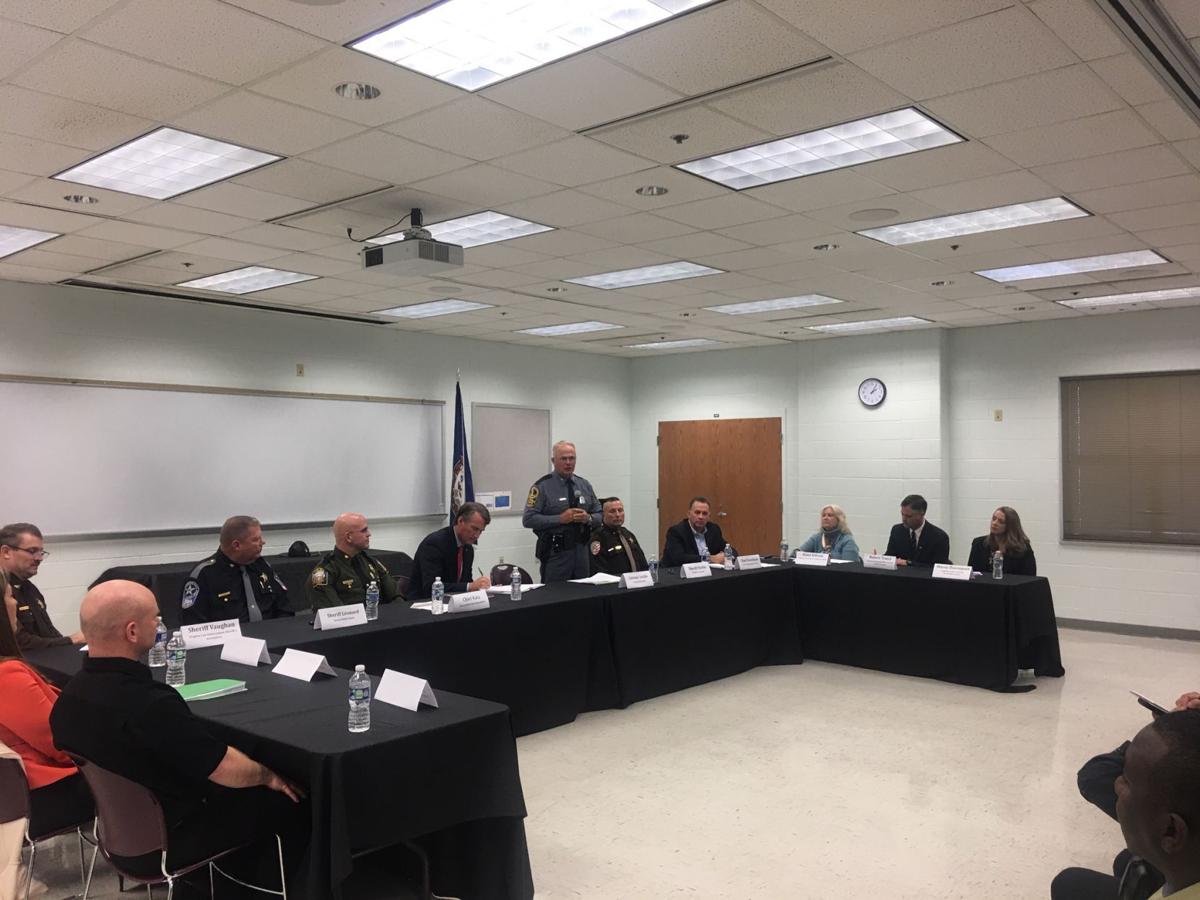 Gov.-elect Glenn Youngkin (center, seated) took notes as Col. Gary Settle, the Virginia State Police’s superintendent, spoke at a roundtable discussion. Youngkin said these talks will be important to a collaborative effort to maintain public safety in the state.

Gov.-elect Glenn Youngkin met with a cross section of law enforcement leaders in Chesterfield County on Saturday and said such exchanges will be key to a collaborative effort to maintain and improve public safety across the state.

“This is the beginning of the way I expect to approach the many challenges that we have in our law enforcement community today,” Youngkin said following the meeting at the Chesterfield Public Safety Training Center, most of which he closed to the media.

Among the participants in the roundtable discussion were Col. Jeffrey Katz, the Chesterfield County police chief; Chesterfield Sheriff Karl Leonard and Col. Gary Settle, superintendent of the Virginia State Police.

Several of the key speakers made introductory remarks that were open to the media. Leonard noted that at one point 70% of the inmates in his charge had some type of mental health issues. “My jail has been converted into a de facto mental health institute,” he said.

Leonard added that because of rules governing temporary detention orders, law enforcement often has to stay with a person in mental health crisis for 144 hours if a bed is not available after 72 hours.

“Just sitting with us for 144 hours is doing no service to them, and it’s taking that officer, trooper or deputy off the road for 144 hours,” he said.

Law enforcement officials said they also are concerned about a spike in overdoses, from opioids to fentanyl.

In his introductory remarks, Youngkin said such roundtable discussions had brought home to him the importance of increasing funding for law enforcement, “standing up for qualified immunity” and investing in behavioral health.

Before the meeting Chesterfield police officer Hung Do took Youngkin on a walking tour of The Bend at 4800 apartments to discuss challenges that face law enforcement.

“We have to press forward and make sure Virginia is going to be safe,” Youngkin said.

He noted that last year Virginia’s homicide rate — 6.15 per 100,000 citizens — was the state’s highest in 20 years, according to Virginia State Police statistics.

Youngkin also said Virginia must “increase the pipeline” of people who are going into law enforcement jobs.

Youngkin did not weigh in on a request by the NRA that he remove gun control activist Lori Haas from the State Crime Commission.

“There’s lots of people calling on me to do lots of things,” Youngkin said, reasserting that “out of the box” he will have a new secretary of education, a new state schools superintendent and a new parole board.

“From there I’m going to evaluate all the positions in government and make sure that we have the most qualified people that are going to press forward with our agenda,” he said.

Youngkin had no specific comment on the acquittal of Kyle Rittenhouse in Wisconsin, saying he had been focused on his campaign and the transition and not on the trial.

When asked how Virginia can combat violence like the recent fatal shootings of 14-year-old and 9-year-old boys in Richmond, Youngkin called for a comprehensive approach that includes community engagement programs. He mentioned Project Ceasefire, pioneered in Boston, which saw success in turning young people away from gangs and violence.

“It breaks your heart,” Youngkin said. “We first have to lift up everyone in prayer, but then we have to go to work, to make sure that we do everything that we can to make sure it doesn’t happen again.”

ROANOKE — Gov.-elect Glenn Youngkin courted members of the Democratic-controlled Senate on Friday, introducing himself to members before the s…

Gov.-elect Glenn Youngkin took a walking tour Saturday at The Bend at 4800 apartments in Chesterfield, where he greeted Octavia Perrin (left) and Devin Harrison (center).

Gov.-elect Glenn Youngkin (center, seated) took notes as Col. Gary Settle, the Virginia State Police’s superintendent, spoke at a roundtable discussion. Youngkin said these talks will be important to a collaborative effort to maintain public safety in the state.