UPDATE: Up to an inch of snow likely for Richmond, but there's potential for a few more

UPDATE: Youngkin sworn in as governor, scraps mandates on masks in schools, COVID vaccinations for state workers
0 Comments
Share this
1 of 5 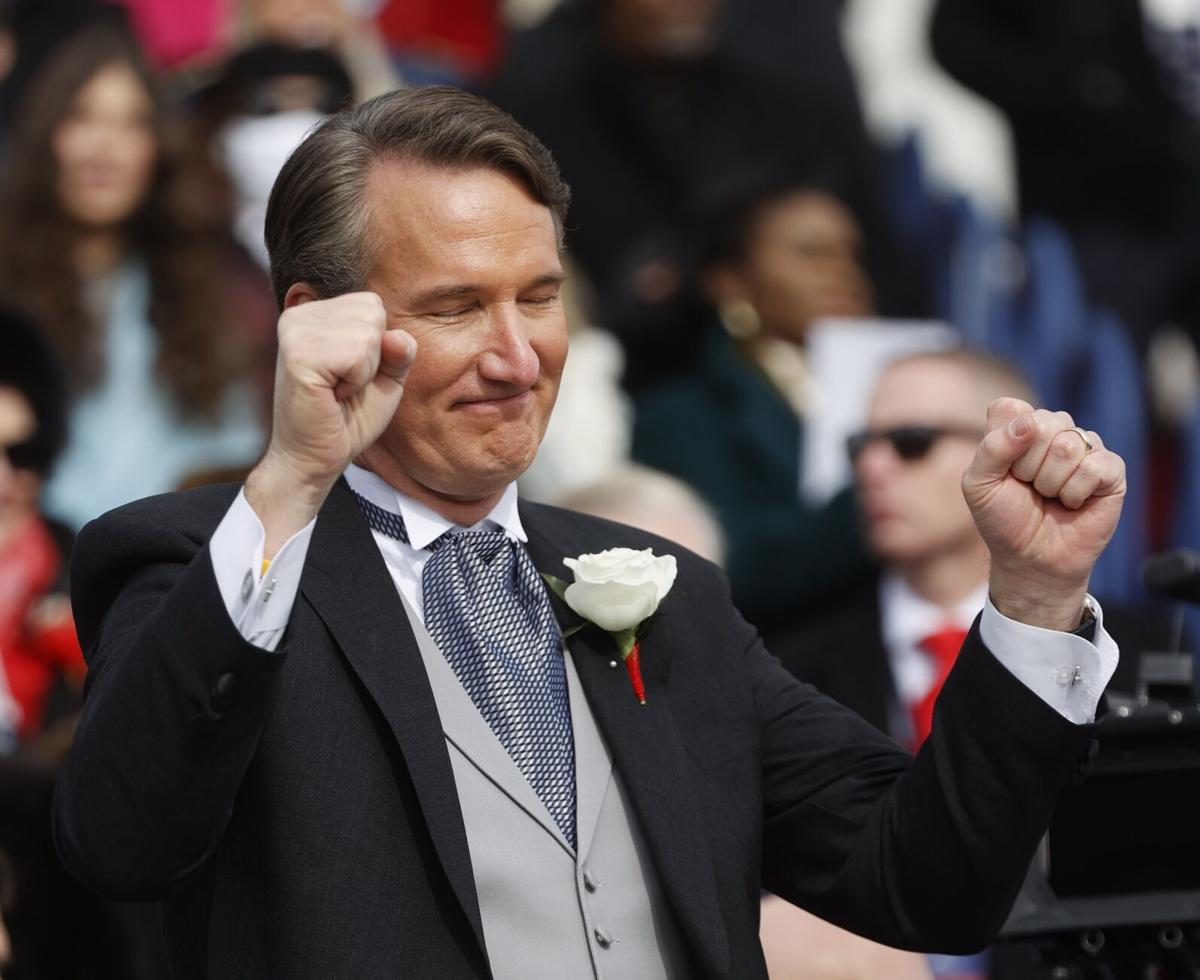 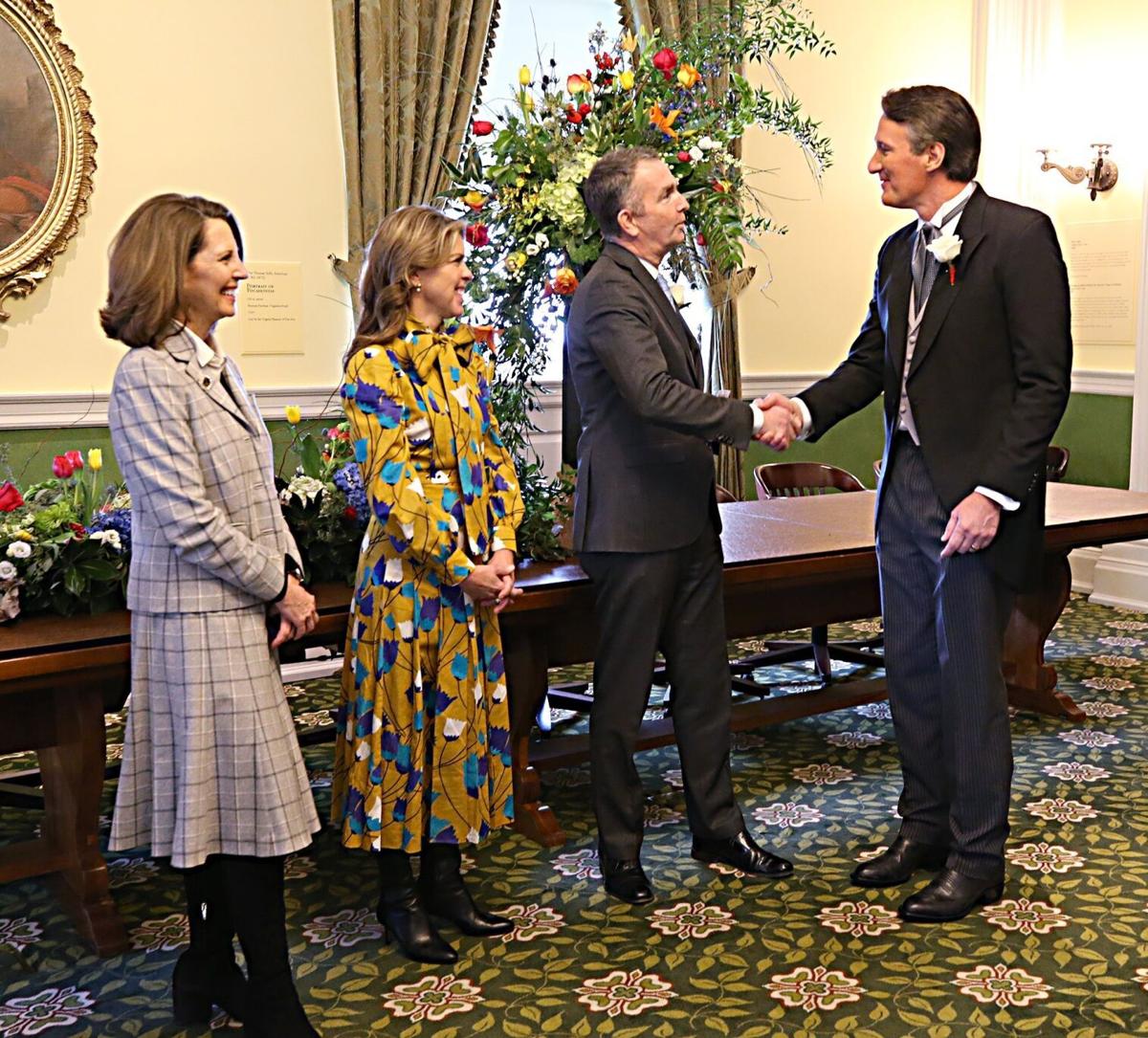 Gov.-elect Glenn Youngkin (right) shook hands with Gov. Ralph Northam as their wives, first lady Pam Northam (left) and Suzanne Youngkin, looked on during the “key exchange” at the state Capitol in Richmond on Saturday before Youngkin was sworn in as Virginia’s 74th governor. He is the first Republican since 2014 to hold the state’s highest office. 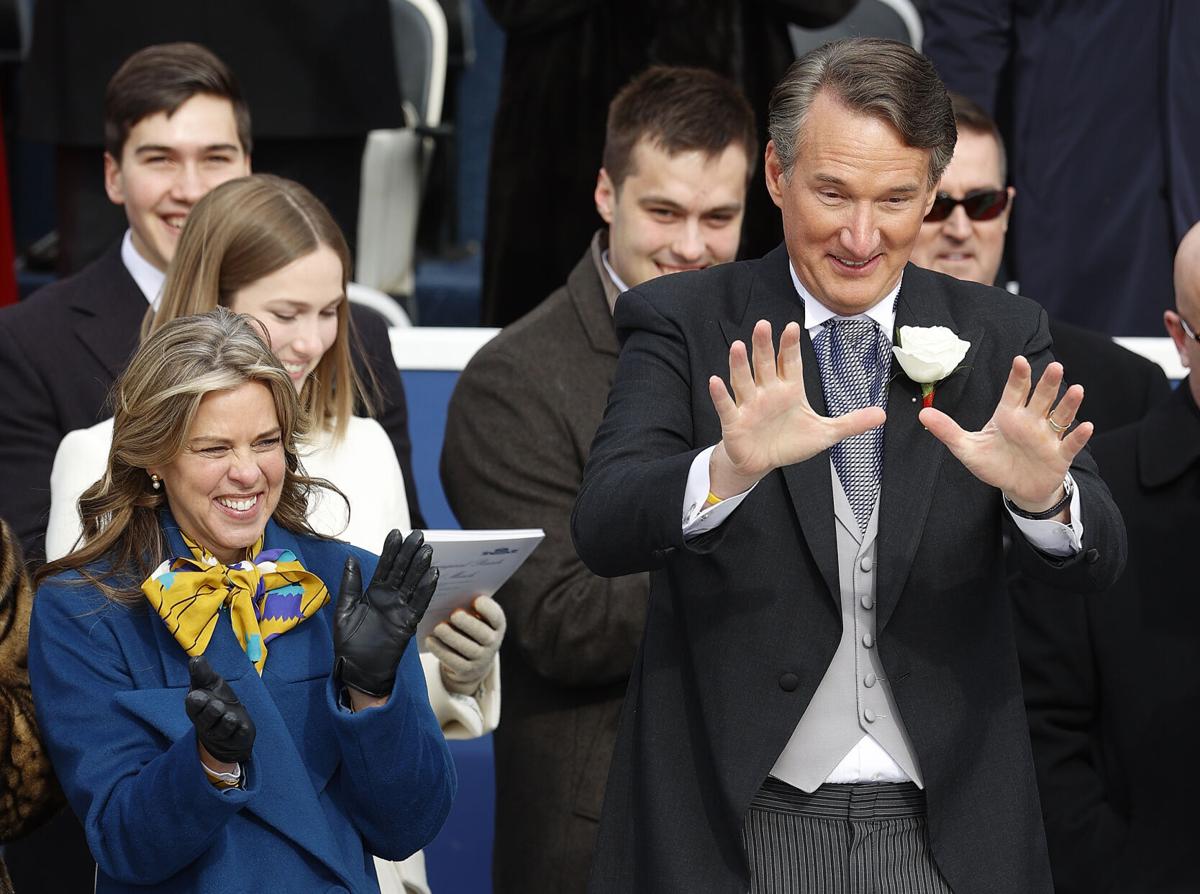 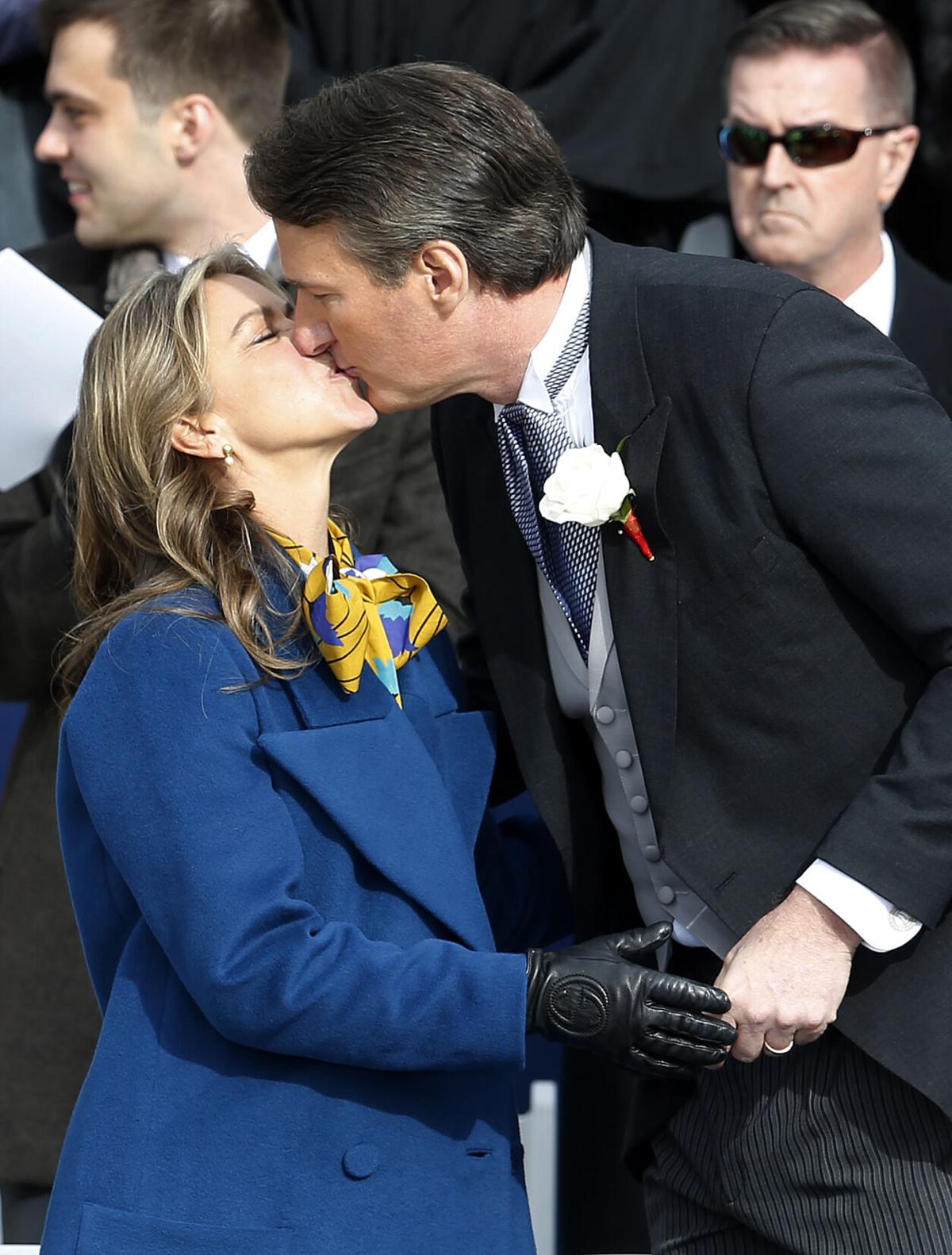 Gov. Glenn Youngkin kisses his wife Suzanne Youngkin after he delivered the inaugural address on the South portico of the Capitol Saturday, January 15, 2022. 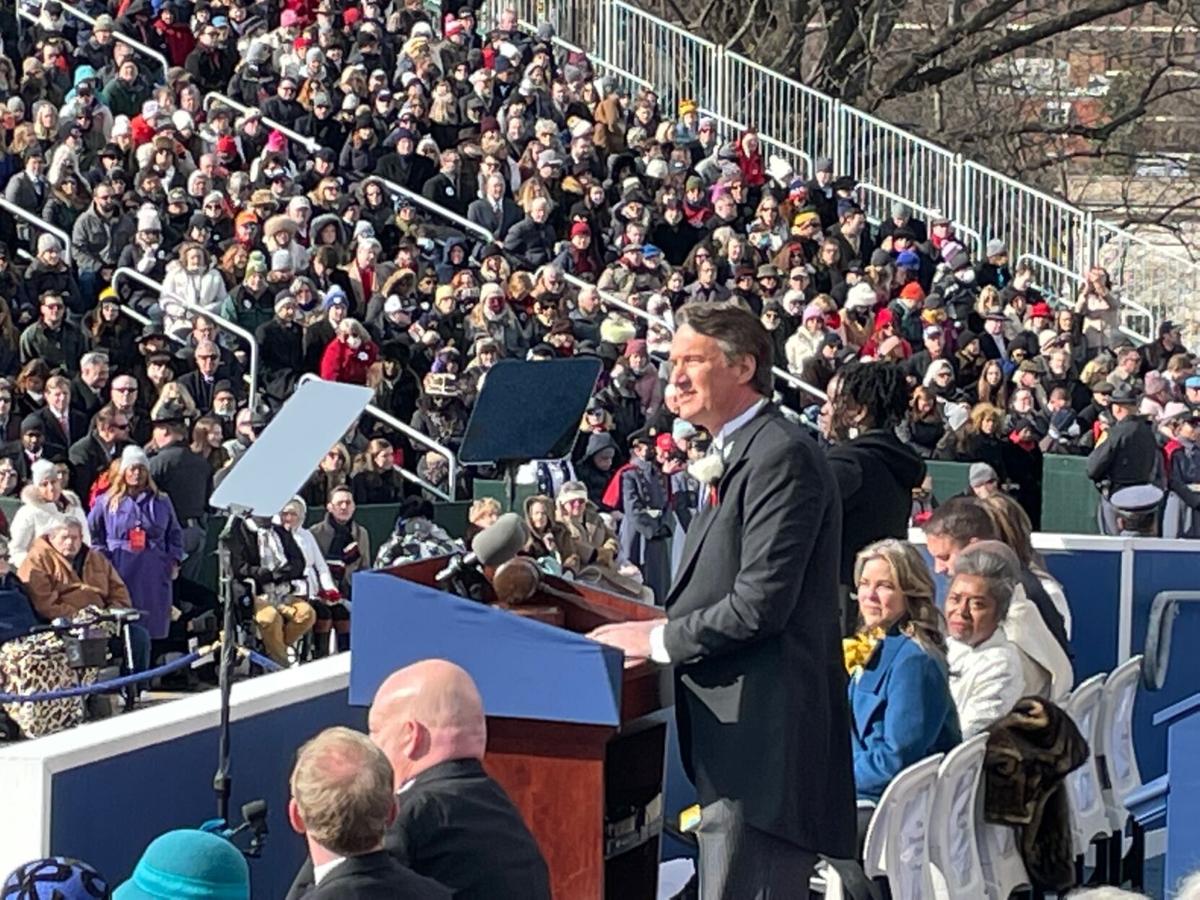 Glenn Allen Youngkin was sworn in on Saturday as Virginia’s 74th governor, vowing in an inaugural address delivered on the steps of the Capitol to embark on a mission to “restore trust in government, and to restore power to the people.”

Youngkin, 55, took the oath of office surrounded by his family and dozens of state leaders. He rose from a business executive with no public office experience to become the first Republican since 2014 to hold the state’s highest office.

Youngkin’s address, delivered from the South Portico, relied heavily on rhetoric from his campaign for governor: that Virginia is not, but could be, “the best place to live, work and raise a family,” and that public liberties have been subjugated by the outgoing party.

Youngkin, during the 60-day legislative session that began Wednesday, will try to move his agenda through a divided legislature, in which Republicans hold a 52-48 edge in the House of Delegates and Democrats hold a 21-19 edge in the state Senate.

“I come to this moment, and to this office, knowing we must bind the wounds of division. Restore trust. Find common cause for the common good. And strengthen the spirit of Virginia,” Youngkin said. “And to be clear, this spirit of Virginia is not about government deciding for us what is best for us.”

Youngkin takes office as the state continues to suffer from the health and economic effects of a global pandemic. Virginia is facing a record-setting surge in cases and hospitalizations that are straining health care resources across the state.

Youngkin’s inauguration, which featured few masks, signals a transition in the state’s approach to the pandemic: He has promised Virginians more flexibility when it comes to vaccinations, mask-wearing and policies for business.

The Republican on Saturday acknowledged the more than 15,000 Virginians who have died of COVID-19, but quickly shifted to the pandemic’s strain on families, which he has chalked up to the government’s response. He talked about the impact on children and parents from school closures, and economic hardships brought on by “inflation and supply chain failures. Rising grocery, gas and utility bills. As well higher taxes and stagnant growth.”

“Our politics have become too toxic. Sound bites have replaced solutions — taking precedence over good faith problem-solving,” Youngkin said. He described the path forward as one that would rely equally on “the miracle of modern medicine,” citing vaccines and treatments, and “respect for individual freedom.”

In keeping with tradition, outgoing Gov. Ralph Northam and first lady Pam Northam left the Capitol with their protective escort about 12:35 p.m., just after Youngkin took the oath of office.

Shortly before his swearing-in ceremony, Youngkin received the keys to the Executive Mansion from Northam in a traditional ceremony at the Capitol. Most of Virginia’s other nine living governors joined Youngkin at the ceremony. One notable exception was former Gov. Terry McAuliffe, who lost the gubernatorial election to Youngkin on Nov. 2.

Earlier Saturday, McAuliffe tweeted that he and former first lady Dorothy McAuliffe had hoped to attend in person, but are quarantining because of a close contact with someone infected with COVID-19.

“We wish Glenn Youngkin and the new administration well today as they start their term!”

Reaction from Democrats to Youngkin’s inauguration included several promises to block swaths of his agenda.

Del. Lamont Bagby, D-Henrico, chair of the Virginia Legislative Black Caucus, said he was less interested in Youngkin’s rhetoric than his policies and his party’s legislative agenda.

“So far, I’ve seen legislation reversing voter protections, justice reform and Youngkin has decided to be hands off when it comes to tough decisions to protect our students and teachers from COVID-19,” Bagby said.

“And the war they have declared on Black history is dangerous to say the least.”

Sen. Mamie Locke, D-Hampton, chair of the Senate Democratic Caucus, said “Senate Democrats have no intention [of] rolling back two years of tremendous progress for all Virginians — not only a select few.”

Senate Majority Leader Dick Saslaw of Fairfax said he looks forward to working with Youngkin on “making Virginia the best place it can be,” adding, “The past eight years of Democratic success have given us a platform.”

Democratic Party of Virginia Chairwoman Susan Swecker was much more pointed: ““We will hold Glenn and his administration accountable every step of the way, and we will remind Virginians that the ‘moderate from Northern Virginia’ is nothing more than a political puppet for the far right.”

Youngkin signed nine executive orders on his first day in office, and issued two executive directives. One order called for an investigation into how the Loudoun County public school system handled incidents of sexual abuse at two schools.

He is also moving to withdraw Virginia from the Regional Greenhouse Gas Initiative; cut 25% of what he termed “job-killing” regulations; and establish a commission to combat antisemitism, among other actions.

Youngkin’s Cabinet nominees were sworn in, but still require General Assembly confirmation. His pick for secretary of natural resources, Andrew Wheeler, who headed the Environmental Protection Agency under former President Donald Trump, has drawn condemnation from Democrats and could face rejection in the Senate.

In comments to the media on Saturday, Youngkin urged lawmakers to put partisanship aside and recognize his Cabinet is part of “Team Virginia.”

“I think we have a moment here to put partisan politics down to the side and recognize that Virginians benefit from having the very best teams, and it doesn’t matter what team you might have been on,” he said.

Throughout his address Saturday, Youngkin portrayed himself as a governor who would unify the state, regardless of party, and spoke much of ongoing public division.

During his campaign, he argued that much of that division was being fostered by public schools teaching students “divisive rhetoric” about race — arguing that lessons on systemic racism were overly negative and fostered tension. Youngkin’s critics, including McAuliffe, said his rhetoric instead tapped into bigotry and the state’s dark history of white supremacy.

Youngkin vowed to “remove politics from the classroom and refocus on essential math, science and reading.”

The new governor praised the nation’s founders, and African American “barrier-breakers” from Virginia, like Maggie Walker, the first Black woman to charter a bank in the U.S., and former Gov. Doug Wilder, the nation’s first elected Black governor. Wilder, who turns 91 on Monday, was among Virginia’s former chief executives who attended the inauguration.

Youngkin was sworn in on the birth date of Black civil rights leader the Rev. Martin Luther King Jr.

“The people of Virginia just elected the most diverse leadership in commonwealth history. Sending a message that Virginia is big enough for the hopes and dreams of a diverse people,” he said, referring to Earle-Sears and Miyares.

During his speech, Youngkin promised to use the power of government to improve public education, including by raising teacher pay and expanding charter schools, privately run schools funded by public dollars. He also vowed to lower the cost of living, including by cutting taxes and giving incentives to businesses to come and expand in the state.

He has said he will push for a tax-cut package that would include one-time rebates of $300 for individuals and $600 for couples filing jointly; elimination of the state food tax; a 12-month suspension of a 5-cent gas tax increase that took effect July 1; and a tax break for veterans.

He vowed to “preserve public safety,” including by increasing funding for police.

“I’m troubled by the recent attacks on our police,” said Youngkin, referring to protests after the killing of George Floyd by Minneapolis police. Protesters called for a range of changes to policing, from abolishing it altogether to shifting some police funding to community services.

Youngkin concluded his inaugural address by echoing King, saying Virginians “are all sailing in the same boat,” despite the different ways Americans historically have arrived on the nation’s shores — some in slave ships.

“With faith in a loving God, whose presence can be felt here today. And in partnership with Lieutenant Governor Sears and Attorney General Miyares, our Cabinet, and the duly elected leaders of the Virginia General Assembly, we will chart and sail a course through our present troubled waters,” Youngkin said.

“So we reach the shores of a new and better day — with more opportunity and more prosperity.”

Gov.-elect Glenn Youngkin (right) shook hands with Gov. Ralph Northam as their wives, first lady Pam Northam (left) and Suzanne Youngkin, looked on during the “key exchange” at the state Capitol in Richmond on Saturday before Youngkin was sworn in as Virginia’s 74th governor. He is the first Republican since 2014 to hold the state’s highest office.

Gov. Glenn Youngkin kisses his wife Suzanne Youngkin after he delivered the inaugural address on the South portico of the Capitol Saturday, January 15, 2022.