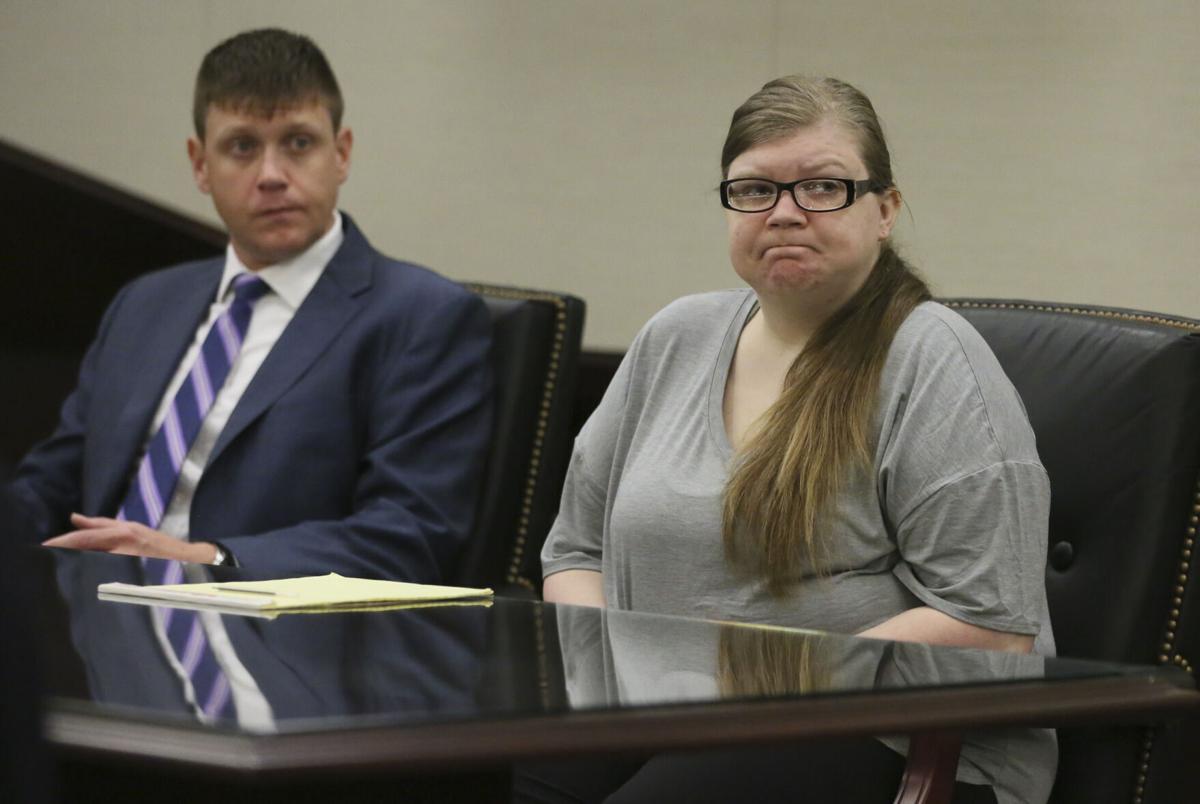 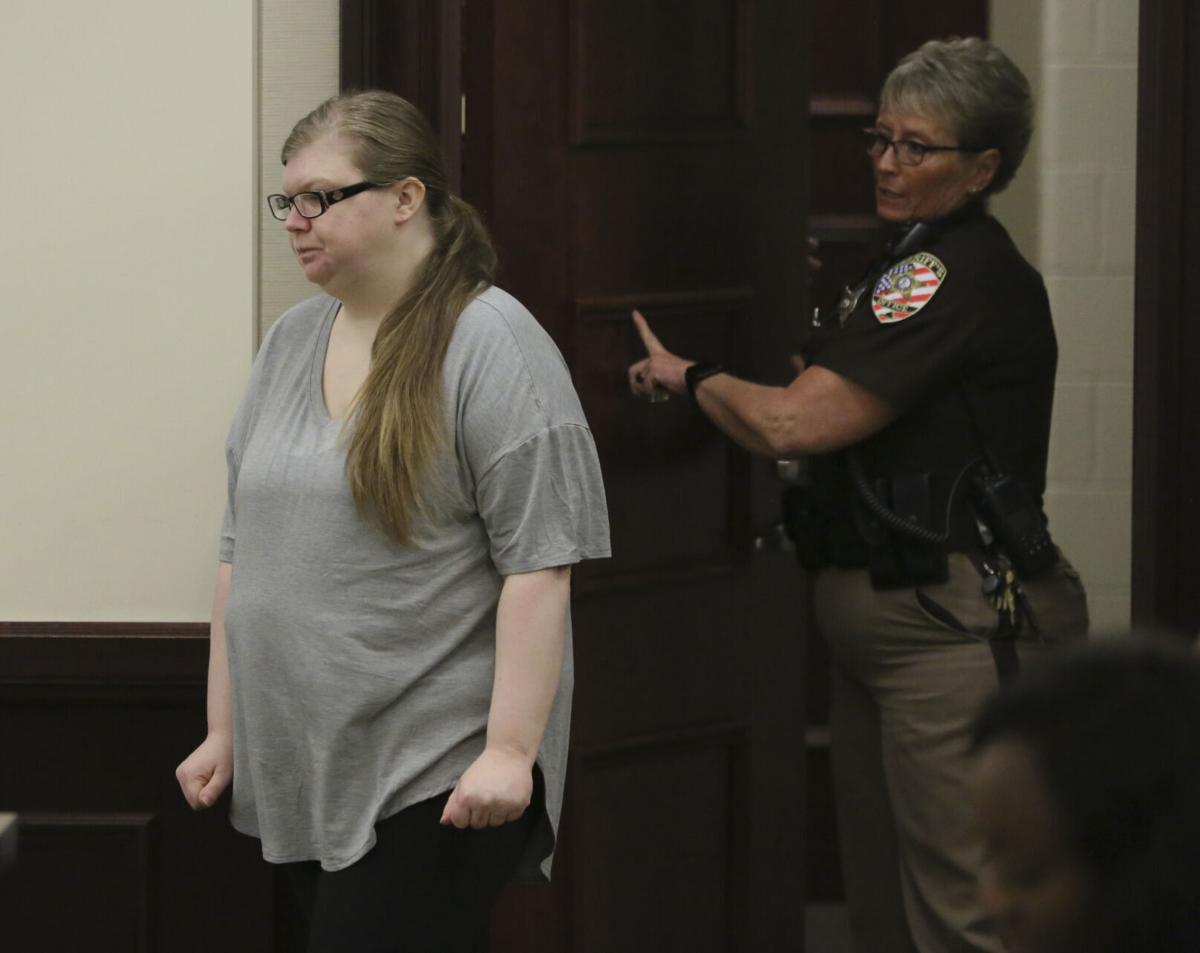 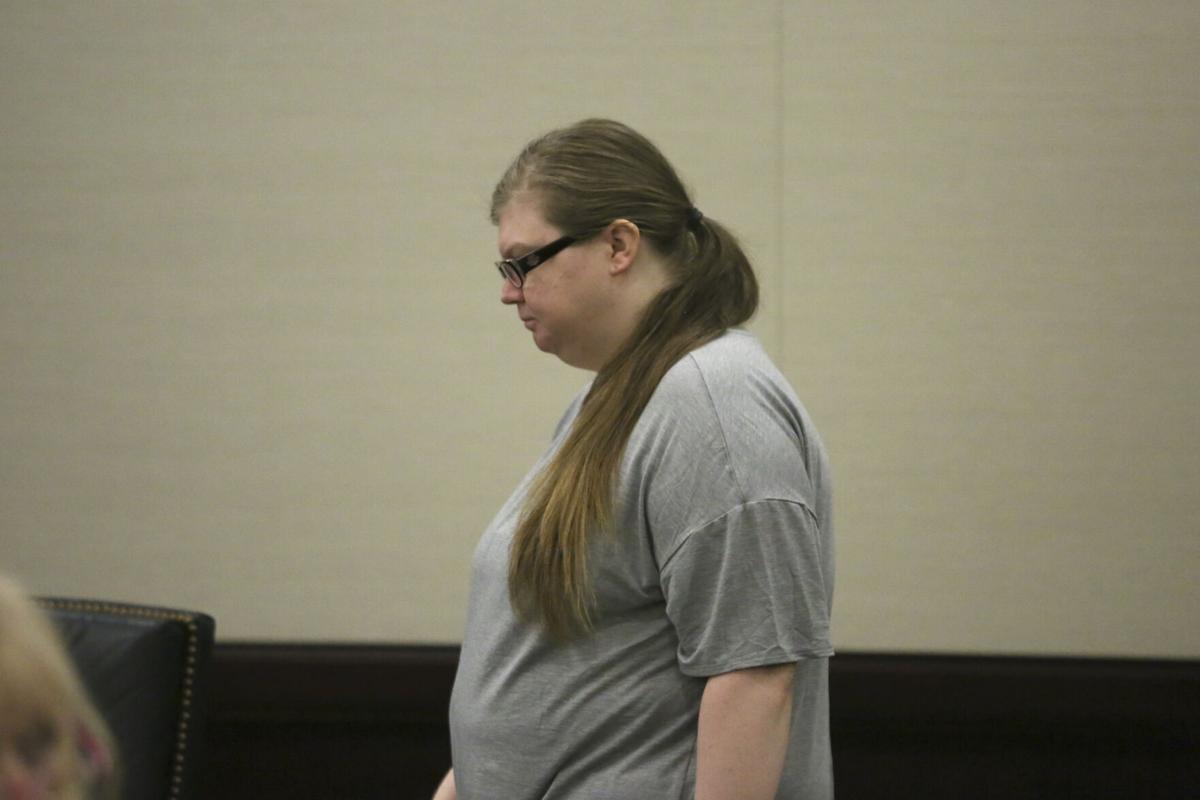 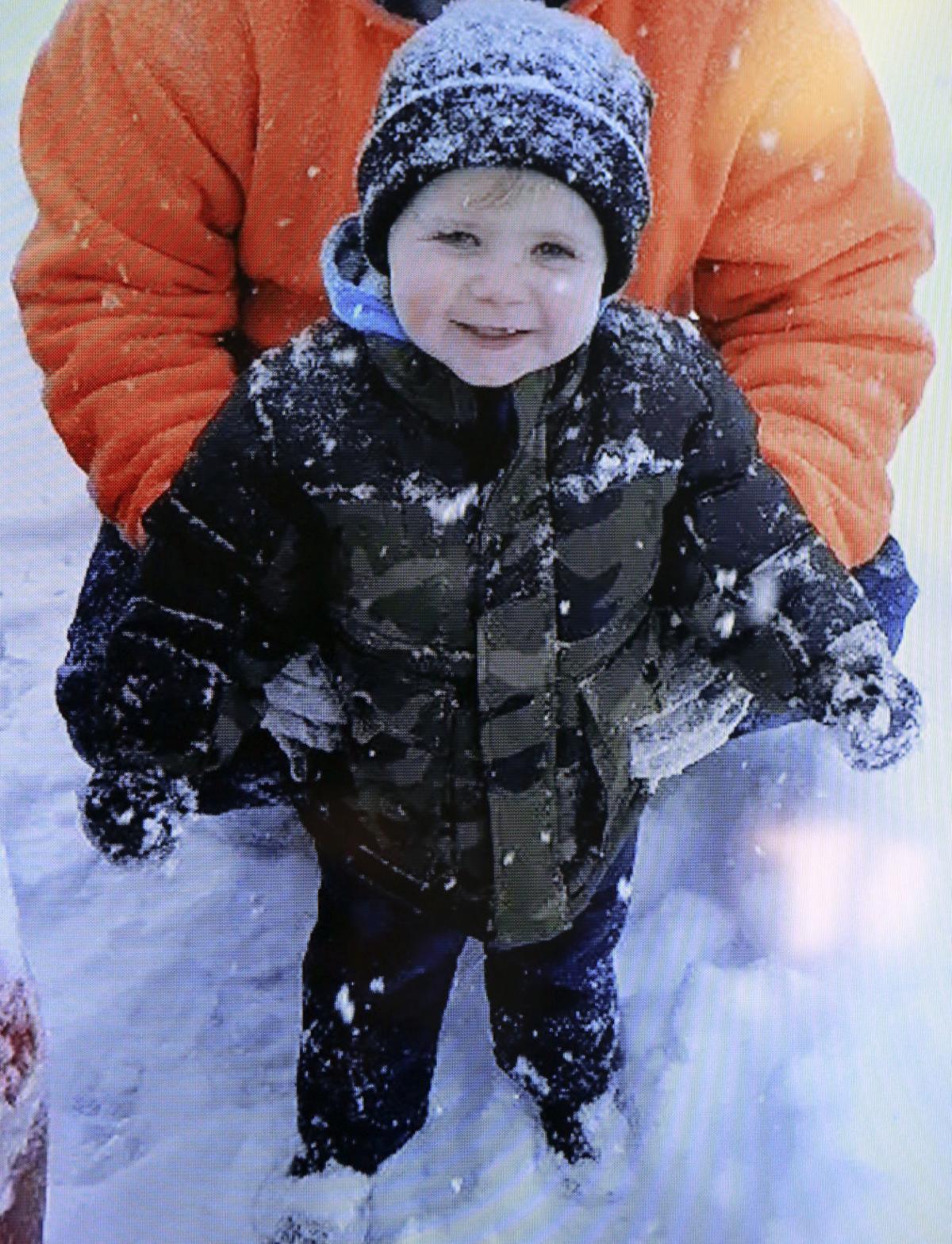 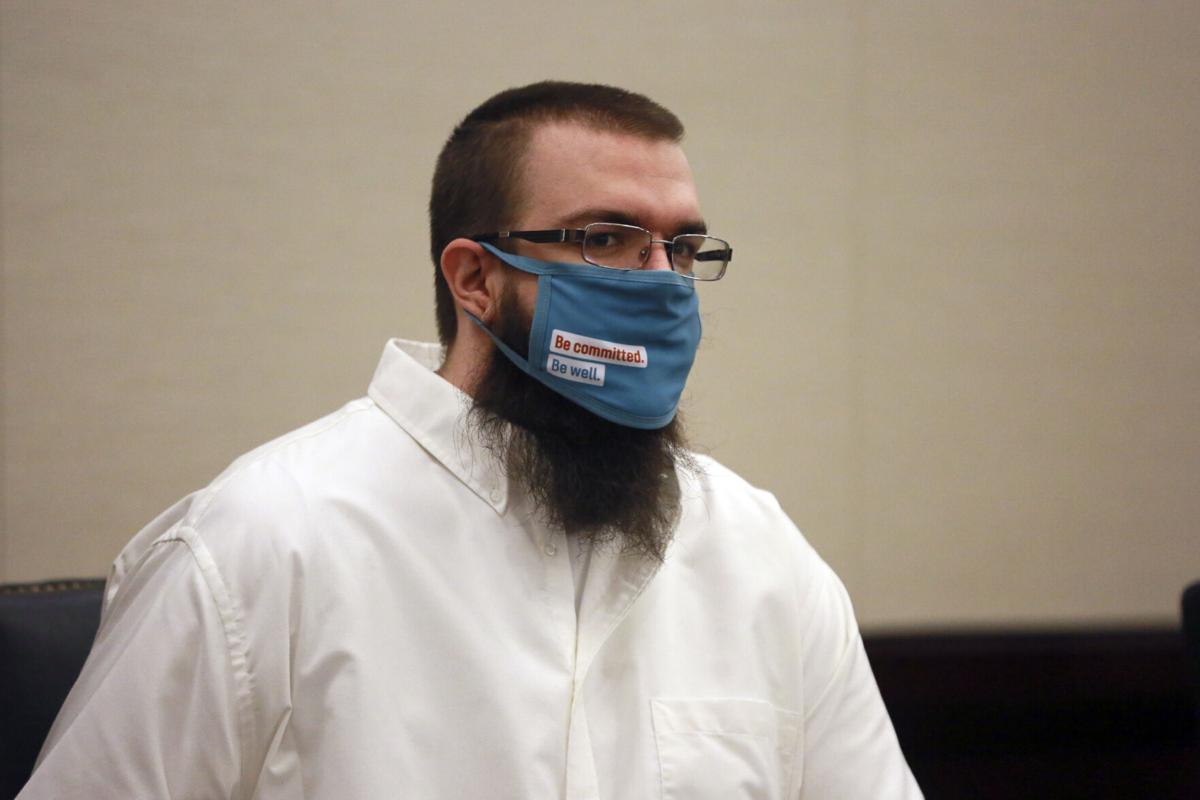 McKenzie Kyle Hellman is seen in court Monday, standing trial on charges for the sexual abuse of his girlfriend’s son. Hellman also faces a second-degree murder charge that will be handled separately. Steven Dale Meek II, 2, died in 2019.

CHRISTIANSBURG — A Montgomery County jury took just an hour Wednesday to find Kayla Nicole Thomas guilty on all counts for sexually abusing and making child pornography of her son – a toddler who died about a week after the sexual abuse, allegedly at the hands of Thomas’ boyfriend.

The verdict came after a day-long trial in Montgomery County Circuit Court, where witnesses described how in 2019, 2-year-old Steven Dale Meek II was sexually abused by Thomas at the request of her boyfriend McKenzie Kyle Hellman, also 27.

Thomas took the witness stand and admitted that she had performed sex acts with her son – and used her phone to document the abuse with five 30-second videos that she sent to Hellman, who was waiting in a bedroom at the other side of the mobile home the couple shared on Christiansburg’s Zinc Lane.

But Thomas said she abused her son because she was terrified that Hellman, who asked her to do it, would harm her, Steven, and the unborn child that she was then pregnant with.

The jury convicted Thomas of charges of inanimate object sexual penetration, forcible sodomy, making child pornography, and distributing or electronically transmitting child pornography. The convictions and sentencing recommendation for Thomas mirrored those that another jury gave Hellman in March.

Thomas testified that she and Hellman, also 27, had dated for about two years and moved into together in Christiansburg mobile home shortly before Christmas 2018. Steven was abused on Jan. 8, 2019, according to time stamps on the videos. In the weeks between the move and the abuse, Hellman had used methamphetamine, Thomas said, and his personality changed.

“He turned into this monster I did not recognize,” Thomas said.

Steven later died due to physical injuries based on another incident that occurred on Jan. 11, 2019, according to testimony at other hearings connected to case.

Hellman was found guilty in March of being an accessory before the fact to child sex abuse and child pornography charges, and to possessing child pornography for keeping on his phone an image from one of Thomas’ videos. Hellman’s jury also recommended two life sentences, plus an additional 45 years, as his punishment.

Hellman is scheduled for sentencing on June 29. He still faces charges of second-degree murder and child abuse for Steven’s death and has another jury trial scheduled to begin Aug. 10.

Thomas testified Wednesday that Hellman became enraged at her after a pregnancy checkup and accused her of having sex with her doctor. To make up for it, Hellman wanted her to abuse Steven, Thomas testified.

Hellman was not related to Steven. Thomas shared custody of the boy with his biological father.

In a message, Hellman wrote that he wanted Thomas to carry out the three specific sex acts with her son, and that if Thomas would send him videos, “I should be able to touch you again.”

At Hellman’s trial in March, prosecutors played a recorded interrogation in which Hellman told police that he wanted to explore his sexuality and wondered if it would arouse him to see someone having sex with a child.

But on the morning after Hellman sent an electronic message asking Thomas to abuse Steven, she did so. “I finally, I guess, caved,” Thomas said.

Afterward, Thomas said, she “felt disgusted with myself.”

On cross-examination, Thomas said that at the time she abused Steven, fear kept her from leaving the relationship with Hellman.

But Thomas also admitted she still writes love letters to Hellman, who also is in jail, including letters she sent as recently as May 18 and May 23 of this year.

Defense attorney Andrew Harman said jurors had to consider “why she did what she did” and argued that Thomas should be found not guilty because she felt forced to abuse her son.

Assistant Commonwealth’s Attorney Sam Norman noted that there were no other witnesses or evidence to support what Thomas said about being afraid and told jurors that she was trying to distract them. Even in the moment before Thomas abused Steven, Norman said, she had options.

“She was alone in a room with her son. She very easily could have picked up her phone and left,” Norman said, adding that there were neighbors living very close to the couple’s home on Zinc Lane.

Steven lived about five days after the sexual abuse.

On Jan. 11, 2019, Hellman made a 911 call saying the boy had been injured in a fall. Police and emergency workers restarted Steven’s heart and he was taken to Carilion Roanoke Memorial Hospital. He died there two days later.

CHRISTIANSBURG — McKenzie Kyle Hellman answered “yep,” “nope” and “yep” again Monday as a judge questioned if he really wanted to plead guilty to the murder and abuse of a 2-year-old, if anyone had made him promises in exchange for his pleas, and if he understood that he faced up to 45 years in prison.

UPDATE 6:58 p.m. Thursday: This story has been updated to include information about Monday's hearing from a Thursday-evening email from Mary Pettitt.

Man charged with murder, sexual abuse of 2-year-old in Christiansburg

A Christiansburg man has been charged with child abuse after the death of a 2-year-old boy Sunday.

It will be the county's first jury trial since a restart following a COVID-19 pause.

McKenzie Kyle Hellman is seen in court Monday, standing trial on charges for the sexual abuse of his girlfriend’s son. Hellman also faces a second-degree murder charge that will be handled separately. Steven Dale Meek II, 2, died in 2019.