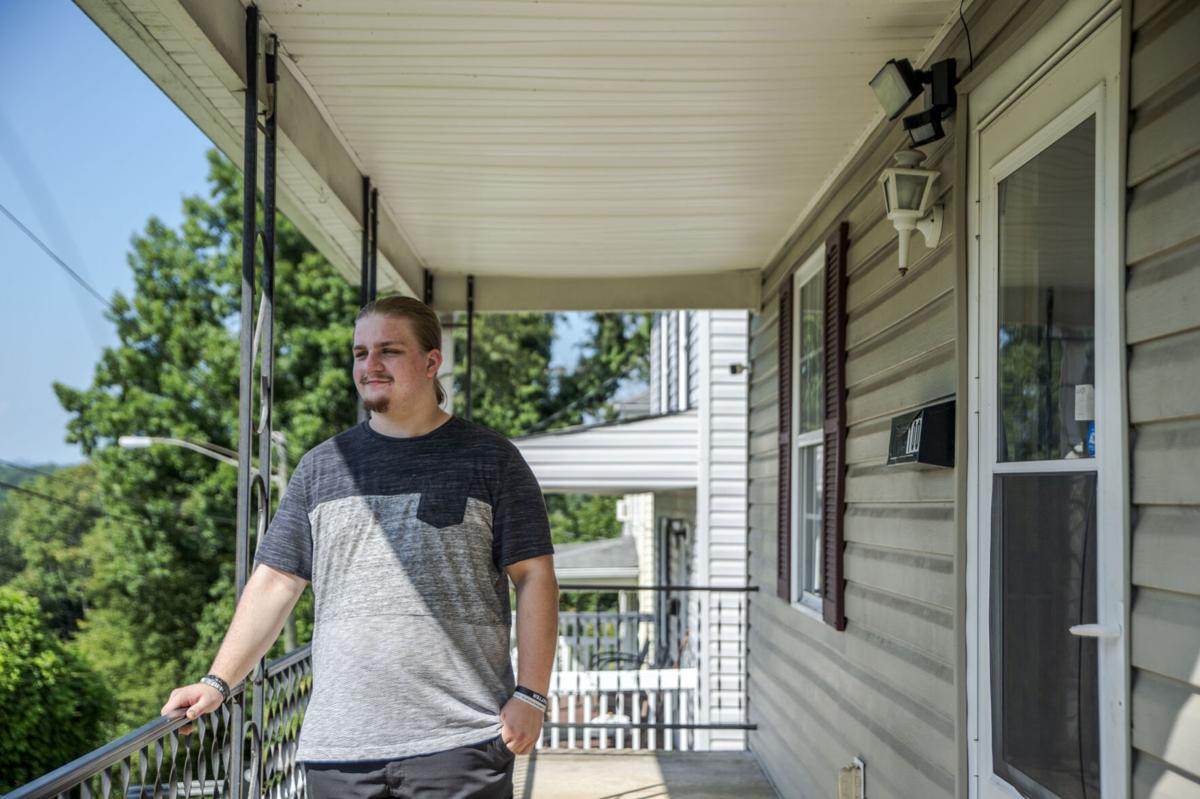 Tiler McFadden, 20, stands on the front porch of the home he recently purchased in Lynchburg. He’s the first foster child to graduate from Impact Living Services’ independent living program and be able to buy a home right away. 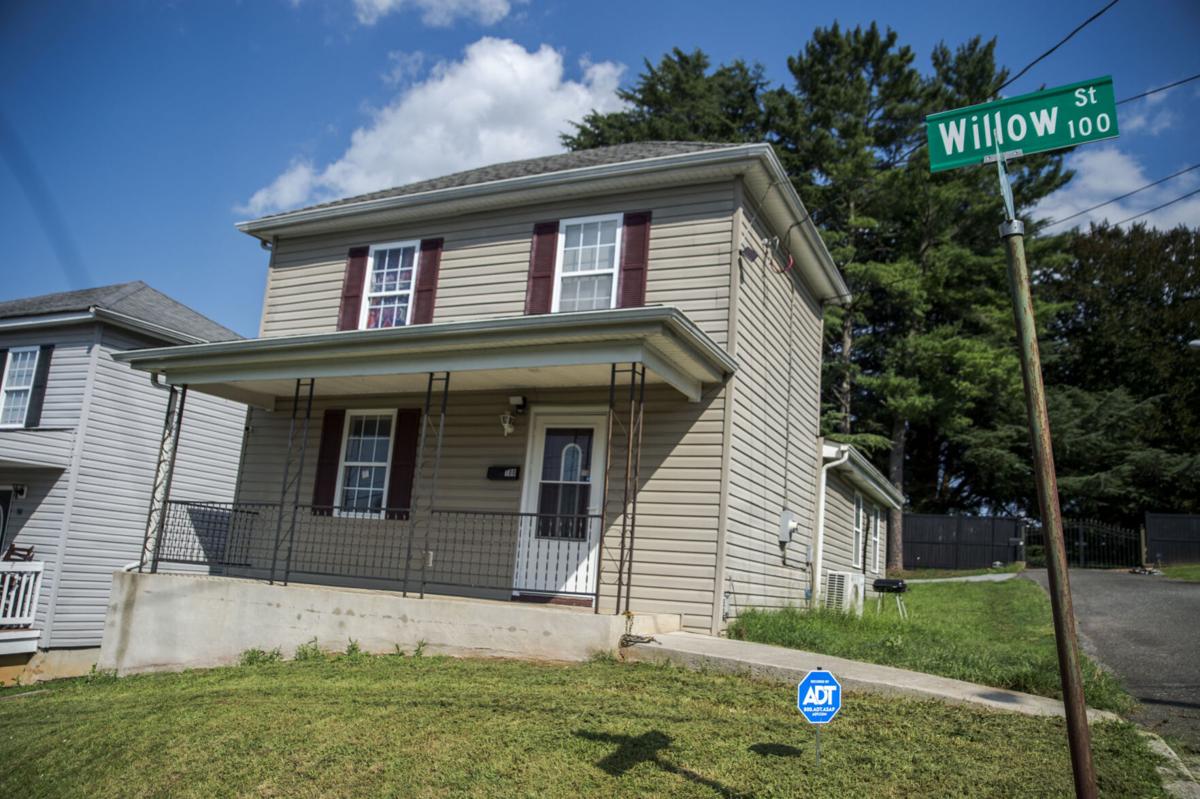 McFadden recently purchased this home in Daniel’s Hill, off Rivermont Avenue. He has a five-year plan for renovations, including transforming a walk-in closet into a half bath. 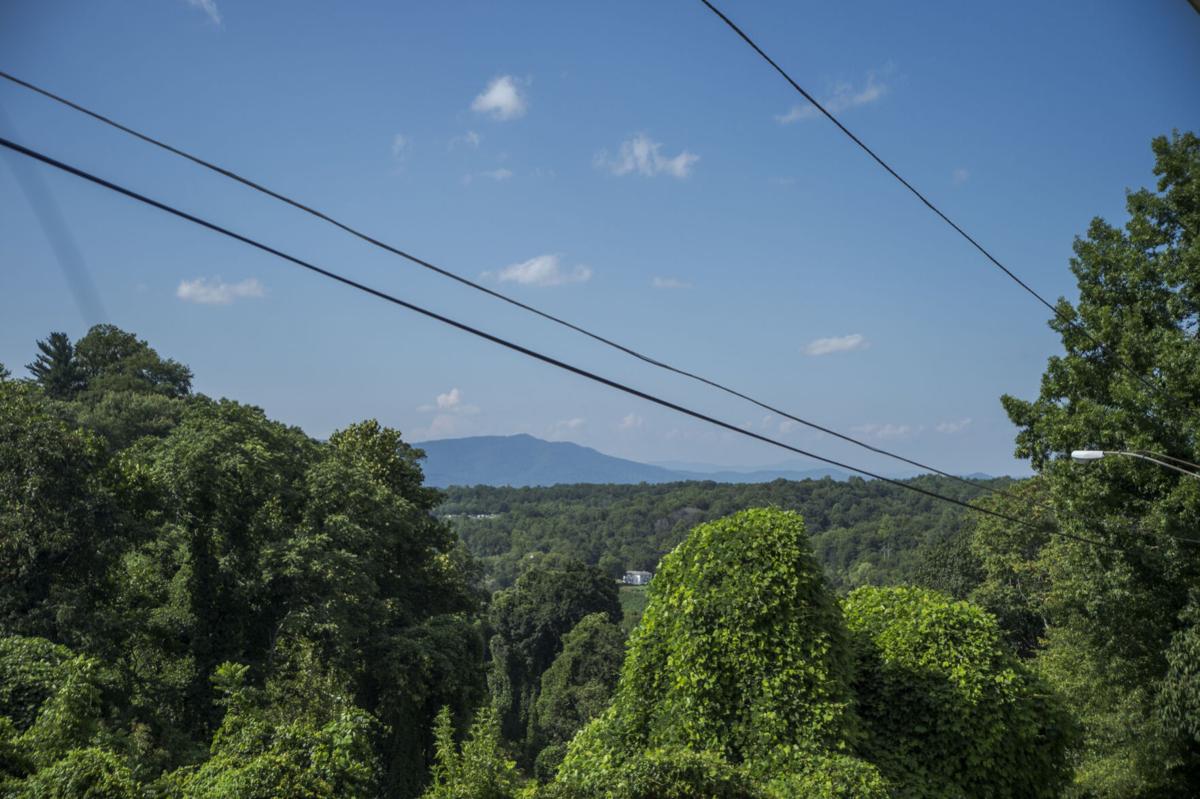 Tiler McFadden’s home looks out on the mountains nearby, and will have a clear view of the river when winter comes, McFadden said.

By SARAH HONOSKY The News & Advance

LYNCHBURG — In late summer, the ravine is overgrown with kudzu and other greenery, but come winter, Tiler McFadden knows he’ll have a view of the river, a sweeping vista visible off the front porch of his newly purchased home.

When McFadden entered foster care at 17, he was only a few weeks away from his 18th birthday. Rather than spilling back out of the system, his social services caseworker told him about Impact, a Lynchburg-based nonprofit that offers an independent living program to help young people transition out of foster care.

Impact Living Services offers supportive services for 17- to 21-year-olds, providing housing, mentorship and skill training until participants are able to succeed on their own.

Since its inception in 2012, about 125 foster children have passed through the Lynchburg independent living program. But Maria Rolf, mission advancement officer at Impact, said McFadden is the first to graduate from the program and be able to buy a home right away.

McFadden, who leaned out over the wrought iron railing on his porch one afternoon in late August, said he likes being independent. He had just finished mowing the lawn of the two-story, three-bedroom home in Lynchburg’s Daniel’s Hill area. With a five-year plan for renovations, such as transforming one of the walk-in closets into a half bath, it was a space he was making his own.

Maybe most 20-year-olds don’t buy a house, he acknowledged, laughing, but that wasn’t going to keep him from doing it.

What made this possible, he said, was the system of support that surrounded him. From the community at Impact, to his case worker with social services and his family, he had people to fall back on.

Rolf said many young people who age out of foster care end up homeless, incarcerated or unemployed. The heart behind what Impact does is “highly relational,” she said — it’s about addressing what she calls “relational poverty,” getting mentors and advocates involved in young people’s lives so that even once they leave the program, they have a community that is there for them.

“The outcomes for youth who hit 18 are pretty stark,” she said. “Impact started to solve that problem and to give some extra support to those really critical years.”

In conjunction with the Virginia Department of Social Services, Impact provides housing, case management and skill training. It also supports the pursuit of college educations, and will help pay for school or, in some cases, reach other financial goals, such as purchasing a car.

It’s a level of support and attention that can’t always be achieved through DSS alone, said Adam Pavao, Impact’s executive director. Impact currently has 11 young people in the independent living program in Lynchburg. It also has several other locations around the state, including in Henrico County.

In the past decade, Impact has expanded its services to include therapeutic foster care, working to place youth in homes and pursue reunification, and a behavioral health program, which offers outpatient and community-based counseling.

“It’s very bleak without intervention — we know that bad things can happen,” Pavao said. McFadden has achieved something that Pavao wishes for all of the young people in the program.

Before he entered foster care, McFadden lived all around the region, bopping from Forest, to Appomattox, to Gladys, where he graduated from William Campbell High School. He and his five younger siblings entered the foster care system about a year after his mom and dad split up, he said. At the time, his mom was living with someone who had a history of drug use and domestic violence, and DSS removed them from the home.

His youngest siblings are now with their father, while the brother closest to him in age has remained with the family McFadden was initially placed with when he was 17.

Without Impact, McFadden said, he wouldn’t be where he is today: with the skills and means to budget money, to put his income away and, eventually, to purchase a house. He also completed a degree in welding technology at Central Virginia Community College and is working full time.

He lived for two years in the Impact housing, a furnished town home with on-site supervision and access to mentorship and support.

Monthly life skills training offered through the program taught him budgeting, time management and other household skills, and allowed him to shape a curriculum around things he wanted to learn.

Working to expand its network of support for the young people in its programming, Impact recently kicked off a volunteer initiative, Impact Circles, bringing in people from around the community to share their specialty or to offer mentorship to youth in the program.

Partnering with local businesses and professionals, Impact has invited a range of folks. They have included a firefighter to offer CPR training; a police officer to give a talk about online safety; experts to speak on nutrition, cooking or healthy relationships; and a real estate agent. That gave McFadden the opening to pursue homeownership.

He closed on the house in late May and was moving in during the first week of June. By August, he seemed completely at home on the concrete pad of the front porch, framed in vinyl siding and maroon shutters. There was a view of the mountains over the horizon, blue-gray in the sunlight.

“I’m really proud of myself,” McFadden said. “I’m glad for everybody in my path who helped me, and I’m happy with the way things are going.”

He said his 17-year-old brother wants to follow in his footsteps and plans to join the Impact program when he graduates from high school.

Hundreds rally at Capitol in third Virginia March for Life

Tiler McFadden, 20, stands on the front porch of the home he recently purchased in Lynchburg. He’s the first foster child to graduate from Impact Living Services’ independent living program and be able to buy a home right away.

McFadden recently purchased this home in Daniel’s Hill, off Rivermont Avenue. He has a five-year plan for renovations, including transforming a walk-in closet into a half bath.

Tiler McFadden’s home looks out on the mountains nearby, and will have a clear view of the river when winter comes, McFadden said.