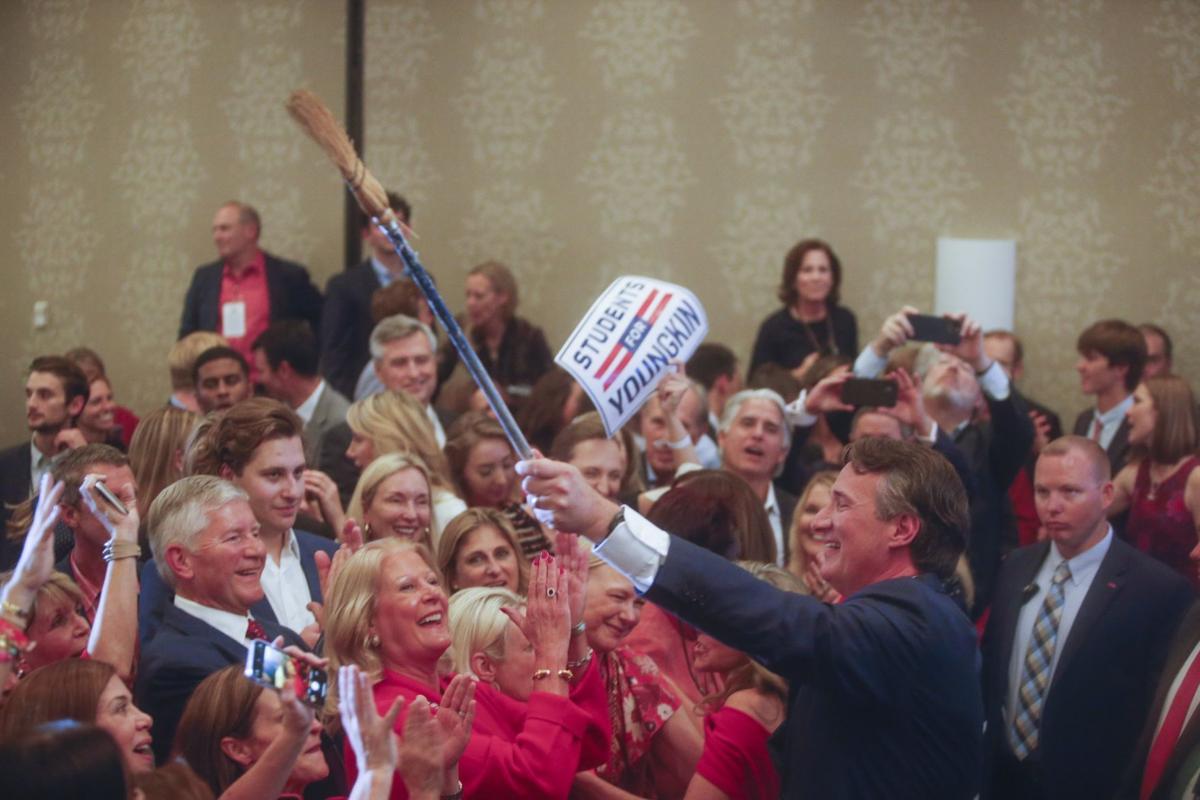 Gov.-elect Glenn Youngkin raised a broom during his election night party at the Westfields Marriott in Chantilly, celebrating Republicans’ sweep of statewide offices. 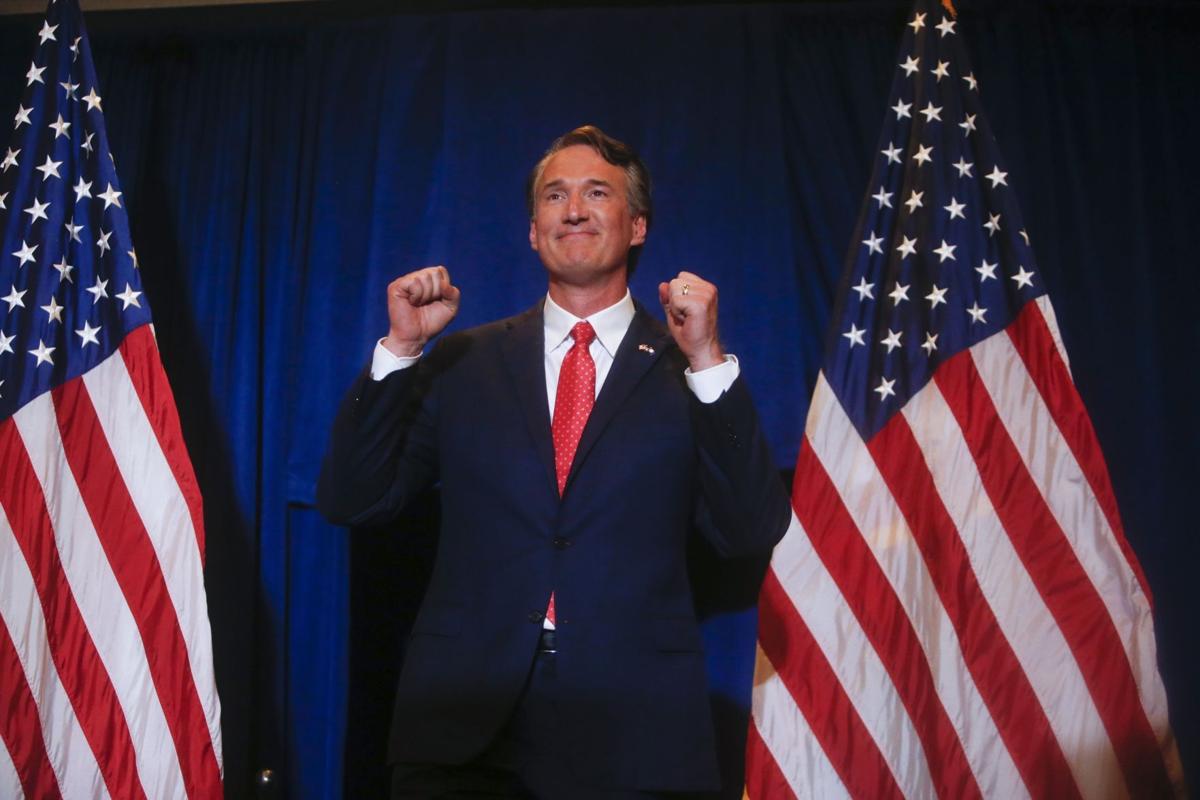 Glenn Youngkin, Virginia’s governor-elect, approached the stage to speak early Wednesday morning during his election night event in Chantilly. “Virginia, we won this thing!” he said. 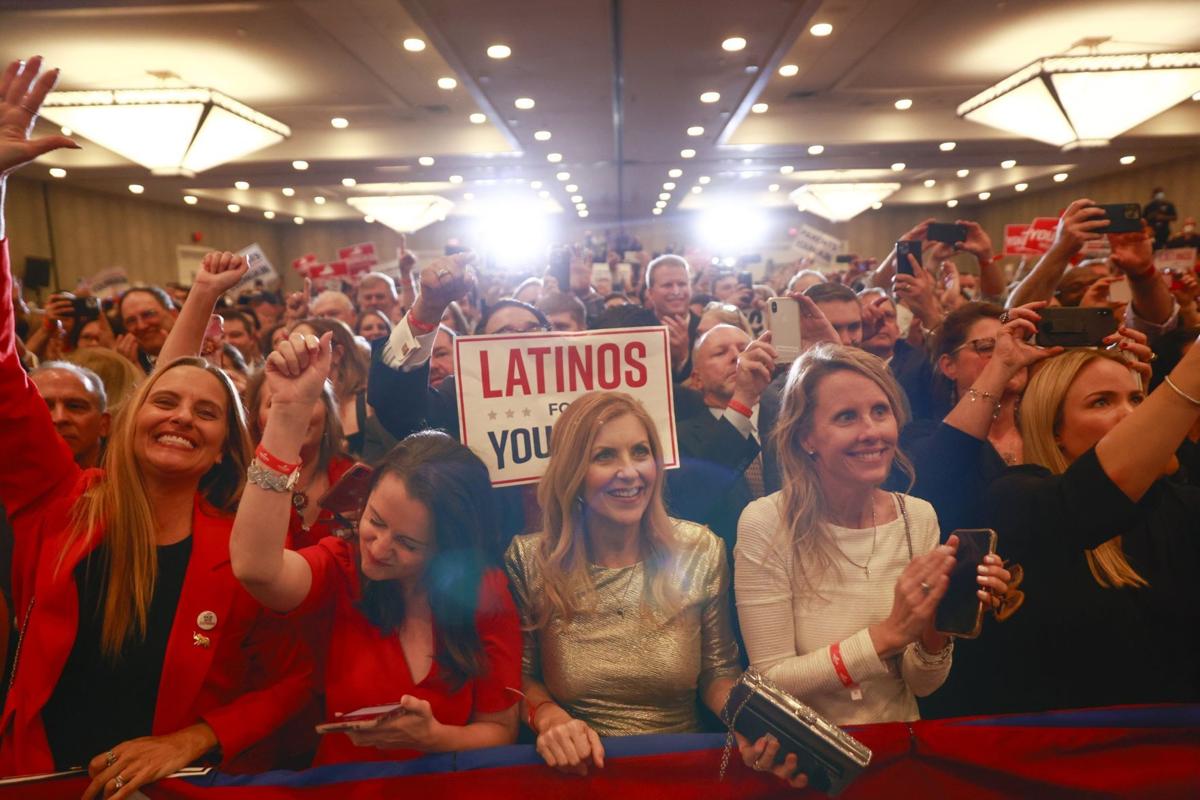 Democrat Terry McAuliffe on Wednesday formally conceded to Republican Glenn Youngkin in the race for governor, a stunning defeat for Virginia Democrats in what was ultimately a referendum of their sweeping hold on the state.

Youngkin, the governor-elect, immediately vowed to alter the course of the state, focusing particularly on education and the cost of living.

“Together, we will change the direction of this commonwealth,” Youngkin told supporters early Wednesday morning at the Westfields Marriott in Chantilly. “Friends, we are going to start that transformation on day one.”

For Democrats, who had not lost a statewide election since 2009 — and who apparently lost control of the House of Delegates as well as the offices of lieutenant governor and attorney general — Tuesday’s election marked the end of immediate progress on their agenda, which included accelerating the increase of the minimum wage and further work on criminal justice reform.

“While last night we came up short, I am proud that we spent this campaign fighting for the values we so deeply believe in,” McAuliffe said in a statement Wednesday, after leaving a voicemail for Youngkin acknowledging his own defeat. “Congratulations to Governor-elect Glenn Youngkin on his victory.”

McAuliffe, who eight years ago declared victory in a contest for governor, declined to appear publicly Wednesday, according to spokesman Jake Rubenstein.

Youngkin is expected to meet with Gov. Ralph Northam on Thursday at the Executive Mansion to begin discussing the transition of power. Northam said he spoke to Youngkin Wednesday and congratulated him on his victory, promising a smooth transition.

“I encouraged him to continue the progress Virginia has begun,” Northam said in a statement.

Youngkin, who was behind in the polls for most of the race, ultimately rose to victory by summoning cultural divisions — including on race — and promised tax cuts to end what he called Democrats’ “extreme” agenda. He was also aided by Democrats’ difficulties at the federal level, including a chaotic withdrawal from Afghanistan and a stalled infrastructure package that suppressed Democratic enthusiasm.

McAuliffe, governor from 2014 to 2018, who had left office with high approval ratings, ran as a business-friendly moderate Democrat who would defend liberal social policies and bring economic growth to the state. He spent much of his time tying Youngkin to former President Donald Trump — who lost in Virginia by 5 points in 2016 and by 10 points last year.

That strategy proved fruitless. Youngkin declined to fully embrace Trump while appealing to the former president’s base supporters on issues like so-called “critical race theory” and questioning the integrity of the election system.

Youngkin led McAuliffe 51% to 48%, edging the Democrat by claiming back a slice of the suburban vote that had recently swung for Democrats, while boosting turnout in the state’s rural west. An exit poll from NBC News found that white women made a significant swing toward the GOP compared with 2020.

“Virginia, we won this thing!” a jubilant Youngkin proclaimed to his supporters in the speech, which came after 1 a.m.

Youngkin’s win bears warning signs for Democrats heading into the midterm congressional elections, and becomes a roadmap for Republicans in the post-Trump era.

Here, it will usher in jostling between Republicans and Democrats, who will now share power.

Republicans’ apparent sweep of all three statewide offices and their projected control of the House will bolster Youngkin’s power in the Executive Mansion.

Democrats still control the Virginia Senate, which does not come up for election until 2023. The chamber is narrowly split, 21-19, and Winsome Sears, the new lieutenant governor, will have a tie-breaking vote on most issues, aside from the budget and election of judges.

During his speech early Wednesday, Youngkin laid out how he would wield the power of his office.

He talked about “restoring excellence” to Virginia’s schools with a curriculum “that includes listening to parents.” Notably, Youngkin did not talk about “critical race theory,” a term Republicans use to refer to schools teaching students about systemic racism, as he has throughout his campaign.

He promised to deliver the largest education budget in the state’s history, with investments in teachers and facilities, similar to what McAuliffe had promised.

But, Youngkin also promised to bring more school choice to Virginia, which only has a handful of charter schools.

“We are going to … close the gap on giving parents an opportunity to select where their kids go to school,” he said.

When the race between Youngkin and McAuliffe kicked off last summer, Youngkin’s only announced policy plan was to bring “election integrity” to Virginia. The Republican eventually centered his campaign around a series of tax cuts, proclaiming that Democrats “overtax Virginians an extraordinary amount.”

On Tuesday, he reiterated promises to lower the cost of living.

Youngkin promised to eliminate the 2.5% tax on groceries, delay for a year the most recent 5-cent increase to the gas tax Democrats passed to pay for infrastructure improvements, and give Virginians a one-time tax rebate of $300 for individuals and $600 for joint filers.

During his speech, he referred to a “defining moment” in which he and his wife, Suzanne, took a walk near their Great Falls home and he said he was ready to leave the Carlyle Group for a new venture. He said it has led to a new “defining moment that is now millions of Virginians walking together.”

A Republican state senator says the office of Gov. Glenn Youngkin notified him that the new governor will sign a bill to end campaign donation…

Gov.-elect Glenn Youngkin raised a broom during his election night party at the Westfields Marriott in Chantilly, celebrating Republicans’ sweep of statewide offices.

Glenn Youngkin, Virginia’s governor-elect, approached the stage to speak early Wednesday morning during his election night event in Chantilly. “Virginia, we won this thing!” he said.