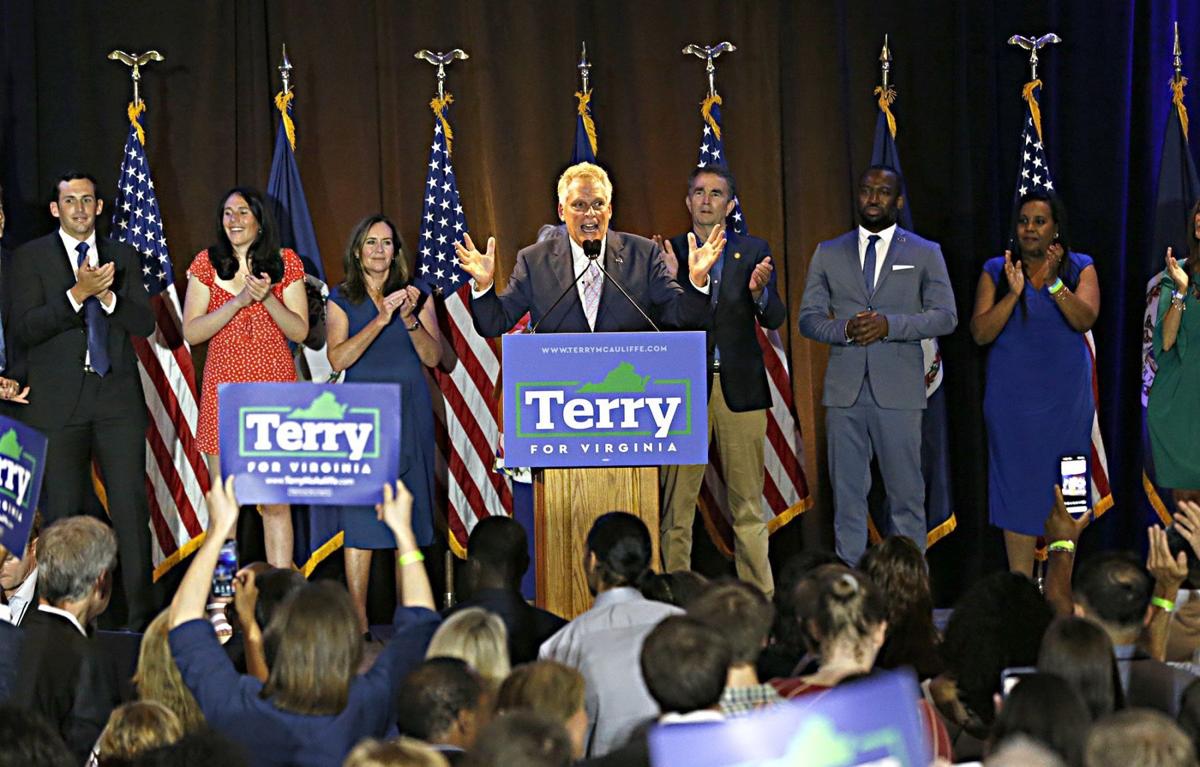 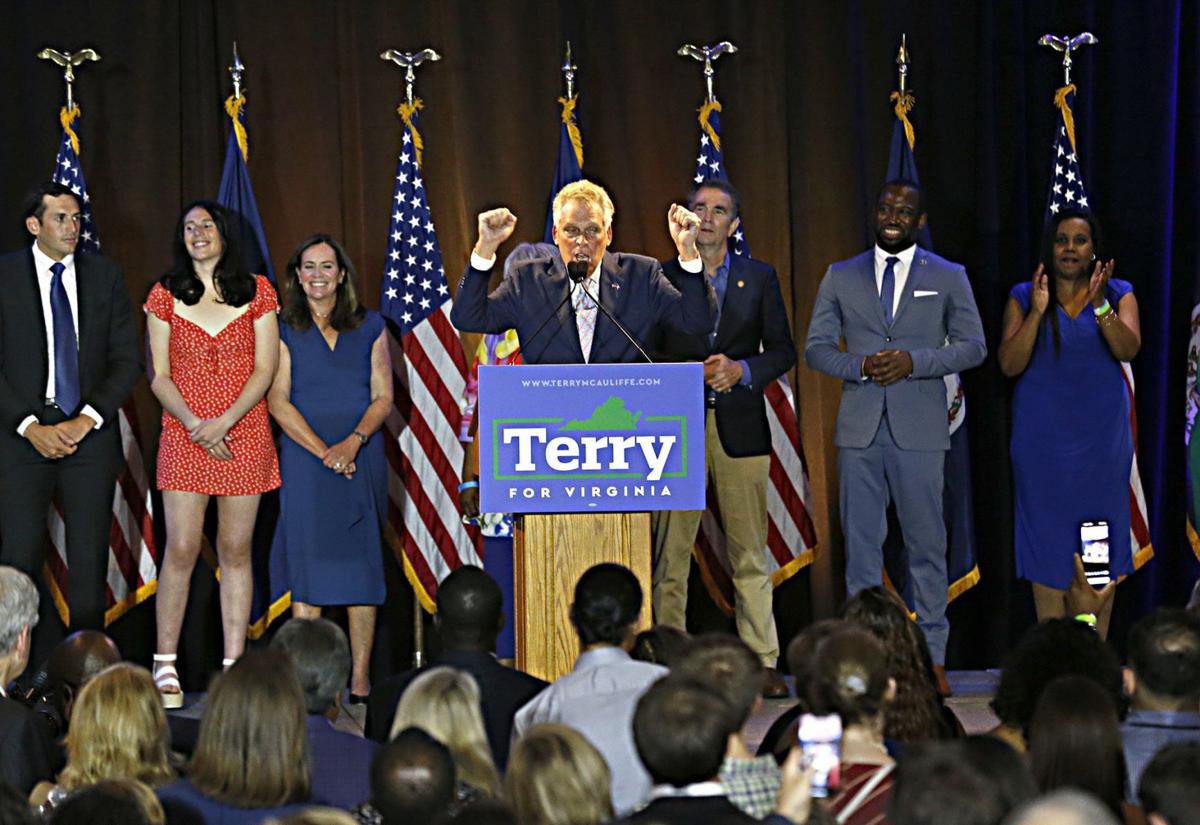 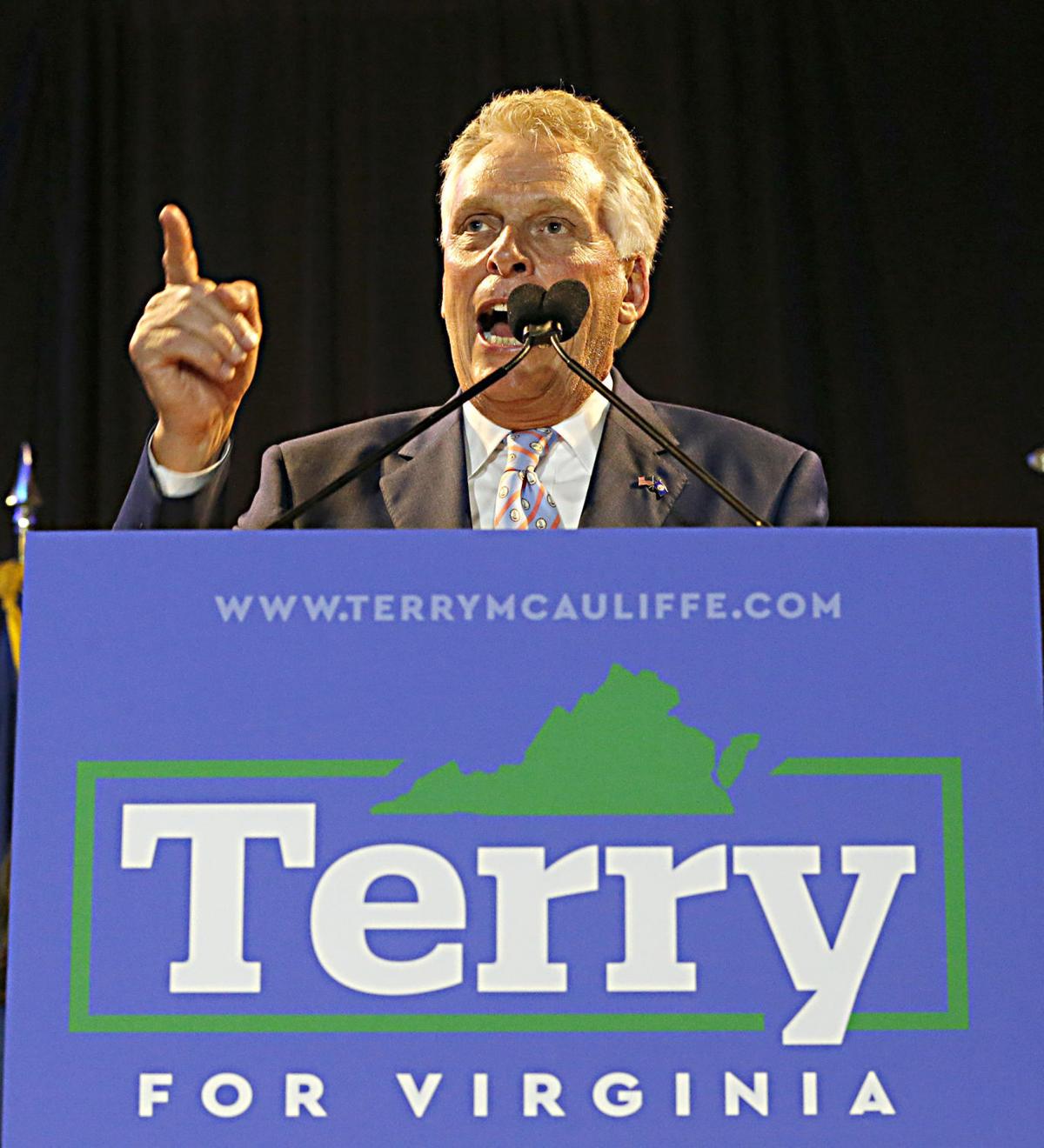 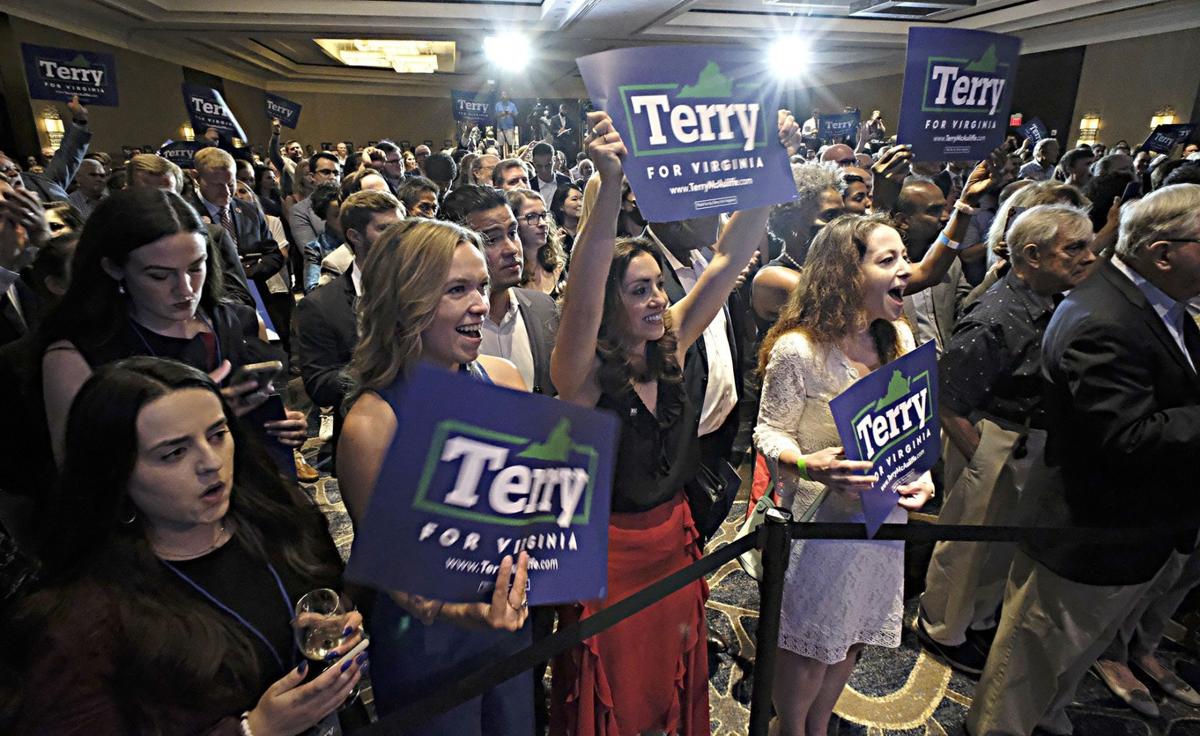 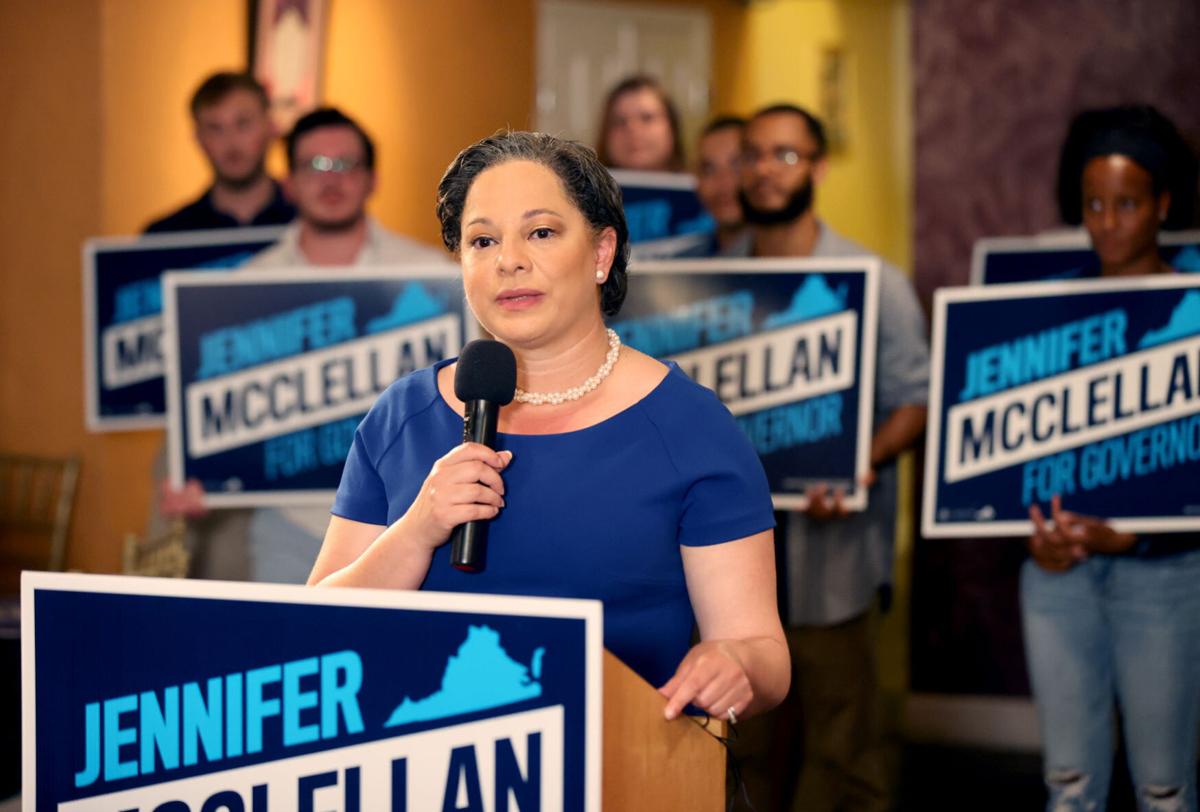 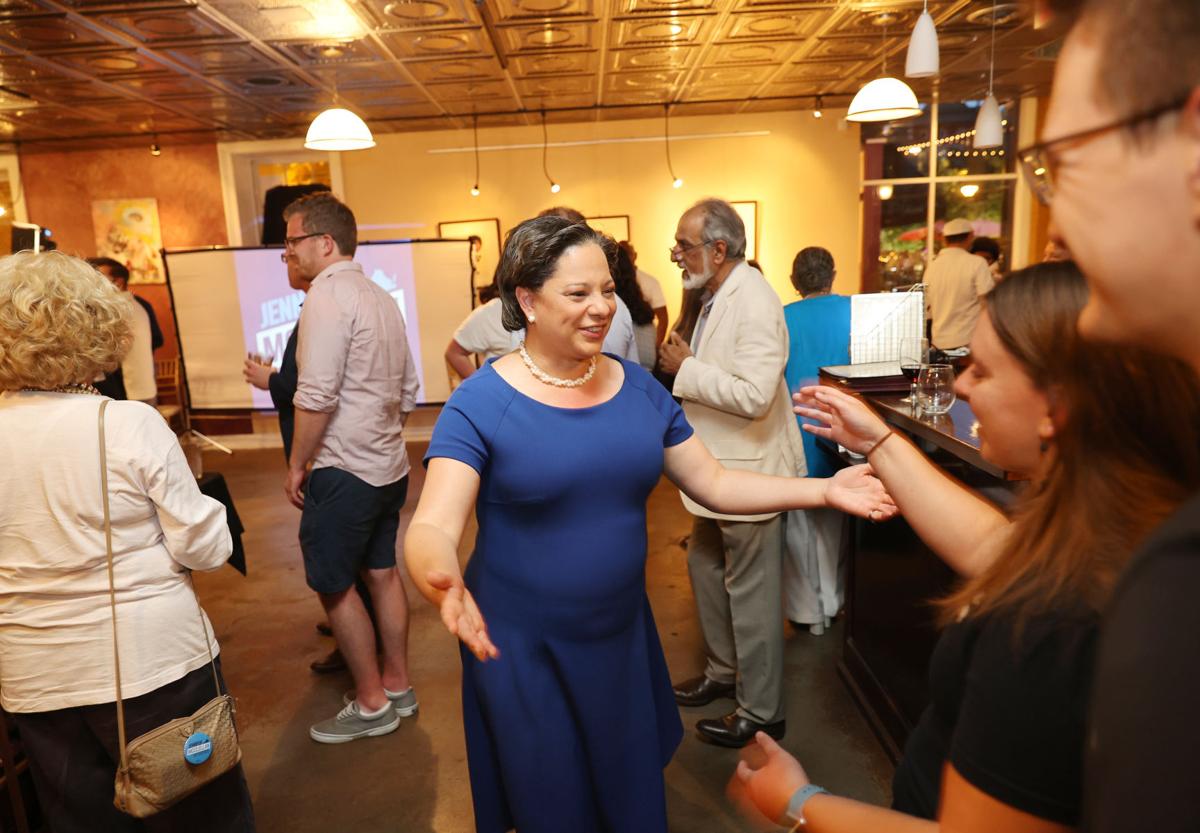 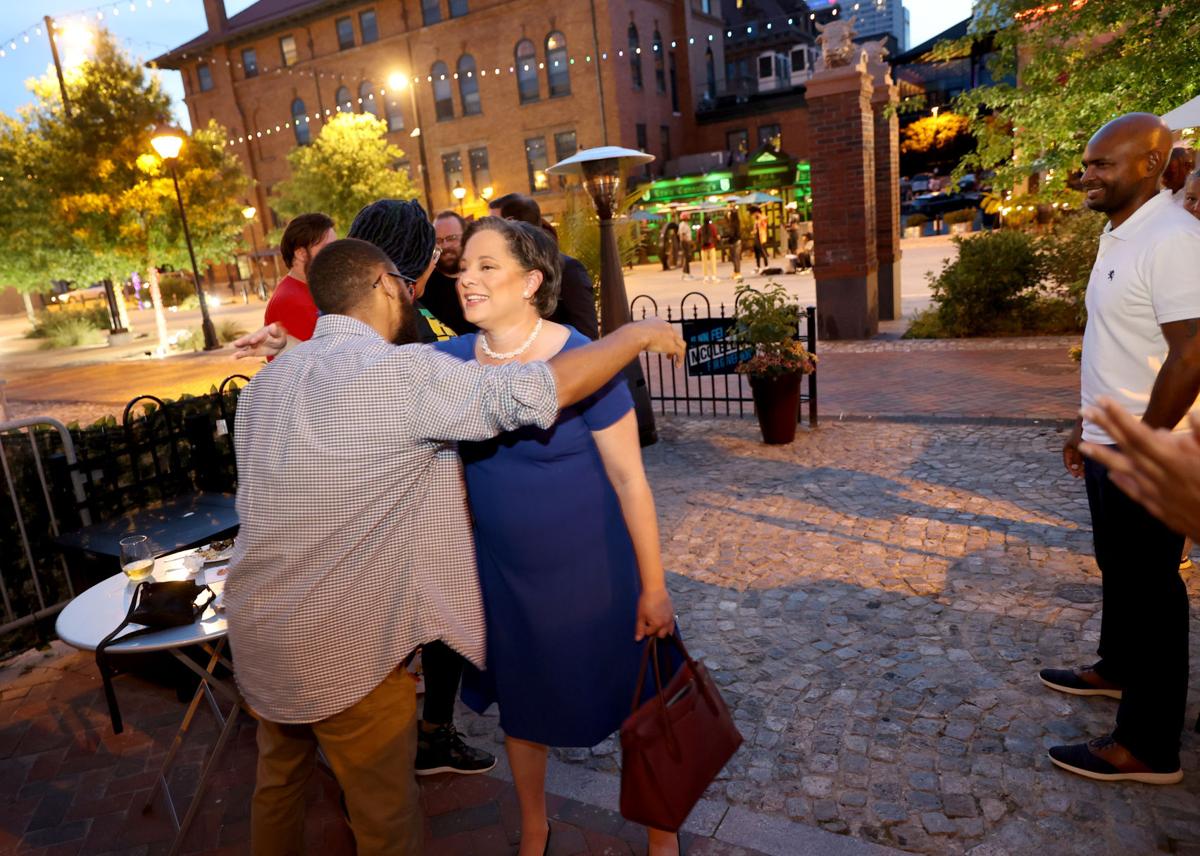 Jennifer Carroll Foy speaks to the crowd with her husband, Jeff Foy at her side. Foy held an election night party at Water's End Brewery on Tuesday, June 8, 2021 in Lake Ridge, Va. Despite Terry McAuliffe winning the Democratic nomination for Virginia governor Virginia's primary elections, everyone at the event was in good spirits. (Sarah L. Voisin/The Washington Post via AP)

Terry McAuliffe, the former governor seeking a return to the Executive Mansion, will represent Democrats this fall in a closely watched contest that will test Democrats’ political hold over the state in the post-Trump era.

McAuliffe, 64, easily prevailed in a five-way Democratic primary where his fundraising, name recognition and connections to powerful Virginians made him the favorite from the outset. With 99% of precincts reporting, McAuliffe had 62% of the vote.

In the race to succeed Gov. Ralph Northam, McAuliffe will face Republican Glenn Youngkin, a former private equity executive who plans to wield his large personal wealth to become the first Republican elected statewide since 2009.

McAuliffe bounded onto a stage in Tysons Corner filled with Virginia Democratic leaders and members of his family, his voice a little hoarse from campaigning, but in a fighting mood. He took square aim at Youngkin and said Virginia would not go backward under his leadership.

“Let me be clear: Glenn Youngkin is not a reasonable Republican,” he said, arguing that Youngkin centered his campaign on election integrity while McAuliffe campaigned to better fund education.

The race will be watched as a bellwether for congressional elections next year, testing engagement among Democrats and Republicans now that former President Donald Trump is out of office and as the nation recovers from the COVID-19 pandemic.

Turnout in Tuesday’s Democratic primary appeared slightly lower than in recent statewide primaries - even with expanded early voting in the state and pandemic restrictions lifted. With 14 precincts still out, about 453,000 votes had been tallied. About 543,000 voted in the 2017 Democratic primary.

McAuliffe trounced a field of Democrats that featured two Black women - former Del. Jennifer Carroll Foy of Prince William County and Sen. Jennifer McClellan of Richmond - in a state that has only elected men to its highest office.

Carroll Foy, who helped Democrats work toward a majority in the House by flipping a Northern Virginia seat in 2017, pitched herself as a progressive voice for the state's working class. McClellan, a legislator since 2006, pleaded with voters to elect someone with leadership experience and the perspective of a Black woman and a mother.

"Although tonight did not go the way we wanted it to, we made history," McClellan said. "I helped put a crack in the glass ceiling. We are going to shatter it — it's only a matter of time."

Carroll Foy said: "Unions stood up. Women stood up. People of color and millennials stood up. Progressives stood up. This campaign was never about me. It was always about us — giving a voice to those who have gone unheard."

Carroll Foy received 20% of the vote, to 12% for McClellan, 4% for Lt. Gov. Justin Fairfax, the second Black man elected statewide in Virginia, and 3% for  Del. Lee Carter of Manassas, a Democratic socialist. Carter also lost his House seat Tuesday in a nomination fight.

Virginia is the only state in which governors cannot serve consecutive terms. McAuliffe would be the first governor to serve two terms since Mills Godwin served as a Democrat from 1966 to 1970 and as a Republican from 1974 to 1978.

McAuliffe ran as the de-facto incumbent promoting successes from his time in office. As he left office in 2018, the popular governor touted a 6% growth in state revenues and what he termed deft business dealings. McAuliffe laid the groundwork for Virginia’s successful pursuit of Amazon’s HQ2 project.

McAuliffe turned his sights on the governorship in the spring of 2019 after exploring a run for president. He was highly visible campaigning to help Democrats win majorities in the legislature while the state's top elected Democrats, including Northam and Fairfax, were mired in scandals. Years earlier, the New York native had entered Virginia’s political scene as the former chairman of the Democratic National Committee and a long-time Democratic fundraiser. He first sought the Democratic nomination for governor in 2009 before winning in 2013.

The race between McAuliffe and Youngkin had appeared to start in May when the Republican won his party’s convention. Immediately, both candidates launched digital ads against each other. Youngkin became McAuliffe’s main target during debates and in the final weeks of the race. McAuliffe labeled Youngkin as an "extremist" who would risk Democratic policy wins in the state, like expanded voting and abortion rights.

Karen Hult, a political analyst at Virginia Tech, said McAuliffe will have a task similar to then-Democratic nominee Joe Biden’s in 2020: energizing progressive young voters, and voters of color. She said McAuliffe’s support among prominent Black leaders in Virginia will help.

“It could be a fairly close election. Republicans are enthusiastic and hungry for victory here because of Democrat control and as an apparent response to the Biden election,” Hult said.

“Virginia Republicans did a smart job of putting together a statewide ticket that is diverse in gender and race. It doesn’t look like the Democratic ticket will have that level of diversity.”

Whether McAuliffe or Youngkin, Virginia’s next governor will be a white man from a wealthy Northern Virginia suburb.

Democrats challenging McAuliffe in the primary all argued for the need to bring new perspectives to the state’s top job.

McClellan argued she would bring policy experience and the perspective of a Black woman and a mother to the Executive Mansion.

McClellan has long been eyed as a rising star in the Democratic Party and an effective legislator, but her campaign could not overcome challenges in momentum and fundraising.

Carroll Foy, who had the backing of a dozen labor unions and powerful national Democratic groups, argued that the state needed a more progressive voice to represent its working class. Her low-income upbringing in Petersburg featured prominently in her campaign.

Both McClellan and Carroll Foy pledged to support McAuliffe in the general election.

Fairfax, who was elected to the state’s second-highest office in 2017, was dogged by the two sexual assault allegations made against him in 2019. Fairfax denied the allegations and argued he would fight for equity for all Virginians, particularly those of color, if elected.

In one Democratic debate, he compared the political fallout of the allegations to the deaths of George Floyd and Emmett Till, drawing sharp criticism from fellow Democrats.

Carter, one of a few prominent Democratic socialists in the state, focused his campaign on attracting Virginians who supported Sen. Bernie Sanders, an independent from Vermont.

Carter said he would usher his party to the left on issues like the minimum wage, union laws and health care, chastising McAuliffe over being too cozy with private corporations while making deals for the state.

Tatum Sheppard, the newly crowned Miss Virginia, is no stranger to pageant titles — her mother, Kellye Cash, was named Miss America in 1987.

William Adams took the alligator home and said Monday that he “had some for dinner last night.”

Seventy percent of Virginia adults have received at least one coronavirus vaccine, a milestone reached two weeks ahead of President Joe Biden’…

Jennifer Carroll Foy speaks to the crowd with her husband, Jeff Foy at her side. Foy held an election night party at Water's End Brewery on Tuesday, June 8, 2021 in Lake Ridge, Va. Despite Terry McAuliffe winning the Democratic nomination for Virginia governor Virginia's primary elections, everyone at the event was in good spirits. (Sarah L. Voisin/The Washington Post via AP)