Powhatan man identified as victim in Nov 19 crash on U.S. 60 in Powhatan 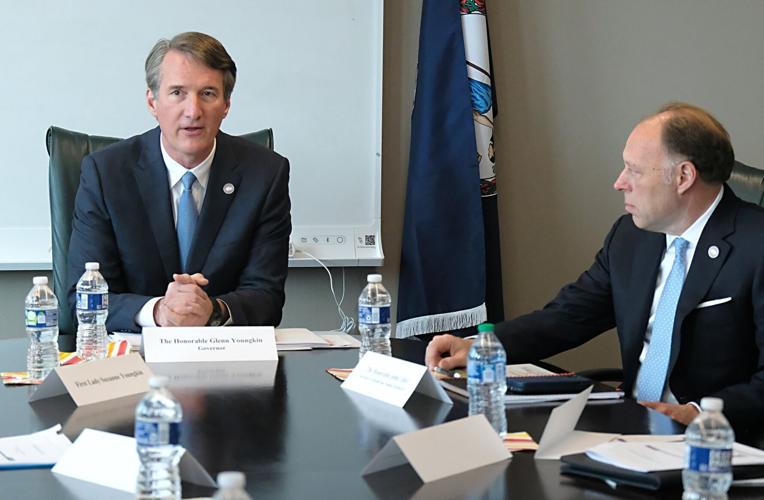 Gov. Glenn Youngkin (left), who spoke as Secretary of Health and Human Resources John Littel looked on at a March meeting. 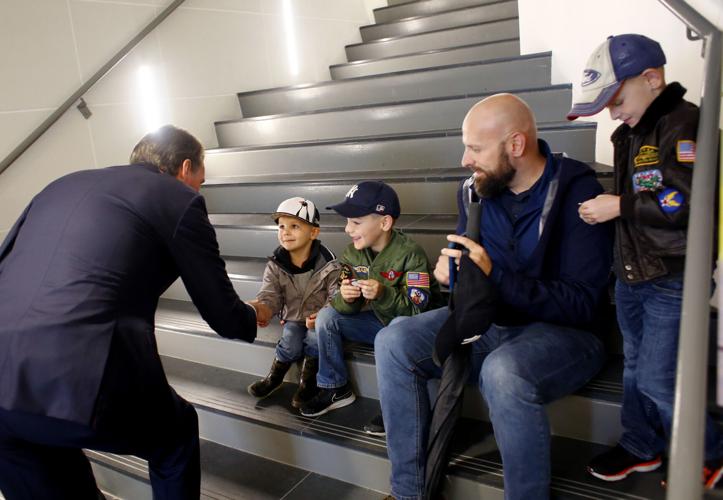 Gov. Glenn Youngkin gave challenge coins to James Ehrich, 3, and his brothers, Lukas, 6, and Thomas, 7. The boys traveled to the Virginia War Memorial in Richmond from Bristol with their father, Josh Ehrich, who said he felt it was important to mark Veterans Day at the site.

“We have a tremendous crisis when it comes to behavioral health,” he told an audience of veterans, active-duty military and legislators at the Virginia War Memorial.

Youngkin says help for veterans is a top priority

He’d been talking about the state’s efforts to reach out to veterans and their families to prevent suicide, but said the challenges of care for people in distress affect the whole state.

Virginia has been struggling for several years with a state mental hospital system that’s been operating at or above its capacity.

For decades, the state has struggled to follow the path that most other states have adopted to shift resources and attention from institutions to helping people with mental illness in their communities.

“The first time we met, that was what he wanted to talk about,” says Secretary of Health and Human Resources John Littel.

“During the campaign, wherever he went, he’d hear these stories, about the struggles people had with access to service, about the people they lost,” Littel said.

The struggle has been getting worse. At one point last year, staff shortages were so bad that the state had to close new admissions to five of its eight mental hospitals.

The freeze lasted for six weeks, but even after that, people in need of acute psychiatric hospital care often waited days for a bed. During the fiscal year that ended June 30, there were at least 7,242 Virginians suffering a mental health crisis who were under a temporary detention order directing admission to a hospital for up to 72 hours who waited an average of one day and 19 hours for a bed.

The issue is staffing, and that’s a major focus for Littel.

There are still 232 beds out of the state hospitals’ 1,380 that can’t be used because there aren’t enough nurses and orderlies to do so.

“It’s frightening ... 60% of psychiatrists are 55 or older; there’s not enough people in the pipeline to replace them,” he said.

“Some counties don’t have anyone who prescribes psychiatric medications ... we’re looking at tele-behavioral health to help,” Littel said.

Many psychiatrists only take patients who can pay out of pocket, but for the tens of thousands of Virginians whose mental illnesses leave them mired in low-paying jobs, or no work, access can only come through Medicaid or state funds for indigent care.

So, when the six insurance firms that offer Medicaid managed care programs in the state sit down for contract renewal talks next year, mental health services will be a big talking point, Littel said. The state hopes to nail down a new five-year contract by 2024 to succeed the current contract that expires in fiscal year 2026.

“We want to be sure there’s real parity between medical care and behavioral health care,” he said.

Roughly 311,000 Virginians’ mental health services were covered through Medicaid as of June 30, up from 287,000 the year before. Medicaid’s spending on these services soared from $1.13 billion in fiscal year 2021 to $1.3 billion last year.

In recent years, what Medicaid pays providers — especially those who offer such critical but non-medical services as supportive housing — has effectively reduced the care available, advocates say.

And Littel, who has worked for years at managed care firms, wants to tap their in-house expertise about pathways that can speed care for people in need.

Those conversations have already started, in fact.

It’s been much like a similar consultation that sped a solution to the challenge that scores of foster care kids sometimes had to sleep in offices because there was no other place for them to go, Littel said. It’s been finding safe places for what had been an average of two dozen kids a month.

Another public-private campaign, this one involving two community services boards and nursing homes in Tidewater and Southwest Virginia, has found beds in those homes for more than 60 state hospital patients who were suffering from dementia. A key measure of success here is that only a handful have had to go back to the hospital because their illnesses worsened.

Yet another conversation, this one with state colleges and universities, offers some hints about where Youngkin’s mental health focus will lead.

“The governor is always asking: What are the best practices?” Littel said.

“He challenged the secretary of education and me, when we had suicides at public colleges, to look at mental health services, and so we talked to all the colleges. Some focused on well-being, some on counseling, more reactive,” he said.

“We found two takeaways. One was that they all had their best practices. But the other was that the challenge was K-12; a lot of kids are coming to college very fragile. A lot of suicidal ideation.”

And that’s where a concern about mental health at colleges and universities is going to be looking for answers, Littel said.

In the same way, Littel wants the state to focus on Virginians with mental illnesses before they find themselves in the kind of crises that require emergency care or hospitalization, even as the immediate focus is on the state’s overloaded hospitals.

“The reality is that we’ve been playing Whac-A-Mole. There’s a crisis here, we press down, and then it pops up someplace else,” he said.

“For years, we’ve been doing the same thing — I was deputy secretary 26 years ago. It feels weird that I’m working on things we were talking about then. ... We need to think about helping earlier, before people are in a crisis,” he said.

Fixing that, though, is more than any one budget can do, even as he and the governor are shaping their proposals for the General Assembly.

And, ultimately, it means a new way of thinking about mental health services, he said.

“Sometimes, we get so focused on institutions that we forget the people,” Littel said. “We’re trying to think about the journey people are on, how they access care, what they run into, how we can help. ... That’s our big focus.”

29 photos from The Times-Dispatch archives

Less snow than normal expected, but it may get off to a cold start.

Every week, Times-Dispatch visual journalists take you to a unique location in our "Virginia from above" series.

The answer is not yet clear, but the bill's sponsor wants to build awareness of the option to help prevent gun violence.

The tragedy in Chesapeake hangs over the traditional tax tribute ceremony.

Gov. Glenn Youngkin (left), who spoke as Secretary of Health and Human Resources John Littel looked on at a March meeting.

Gov. Glenn Youngkin gave challenge coins to James Ehrich, 3, and his brothers, Lukas, 6, and Thomas, 7. The boys traveled to the Virginia War Memorial in Richmond from Bristol with their father, Josh Ehrich, who said he felt it was important to mark Veterans Day at the site.