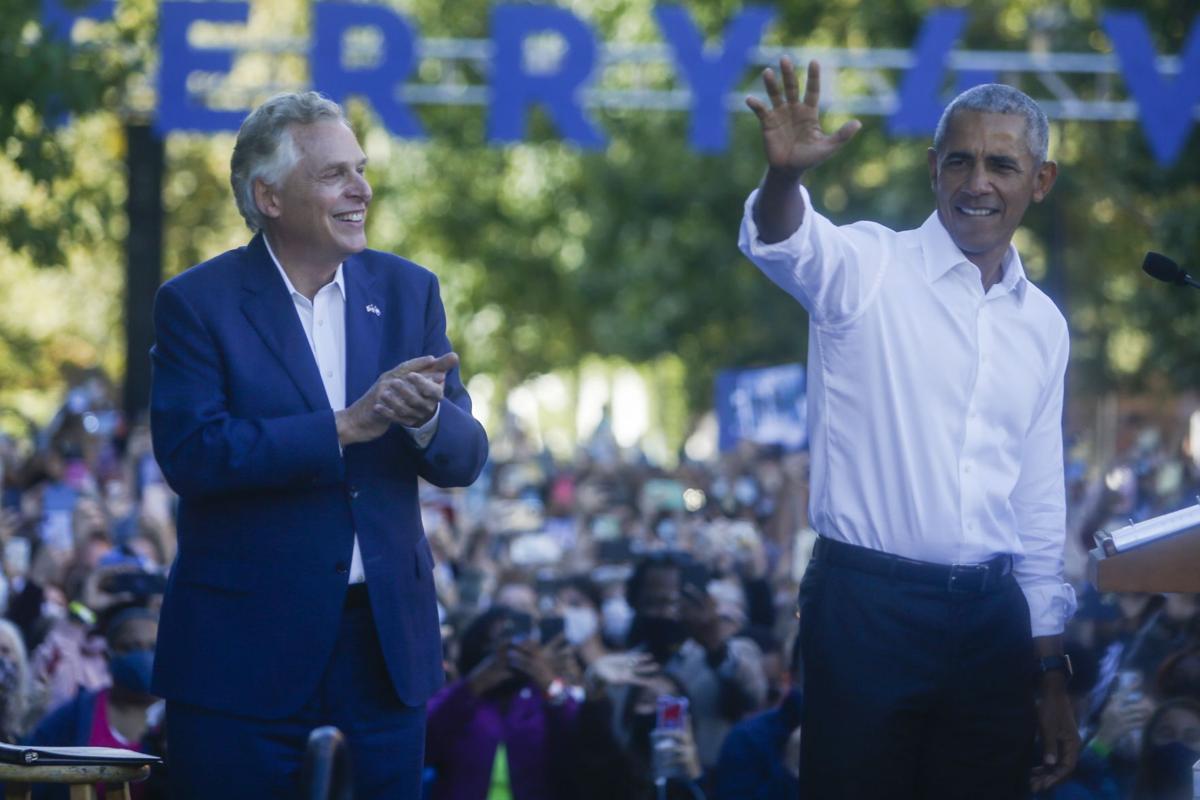 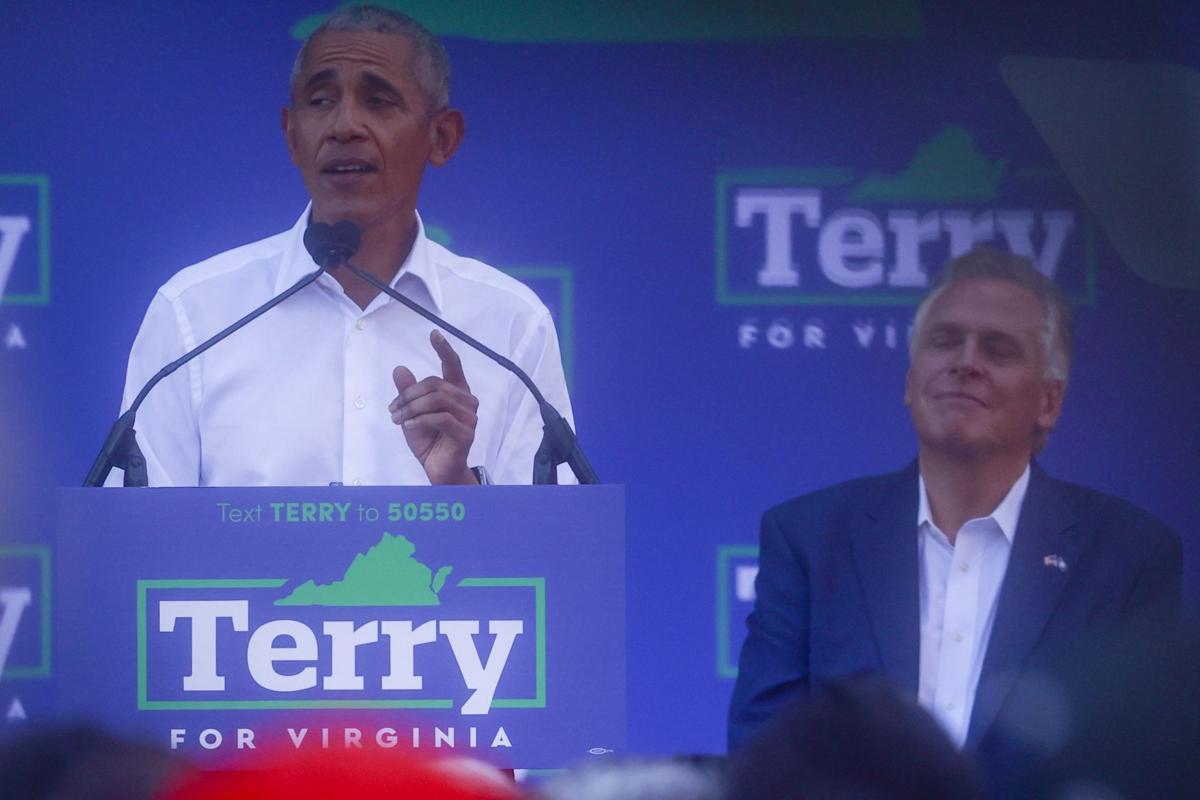 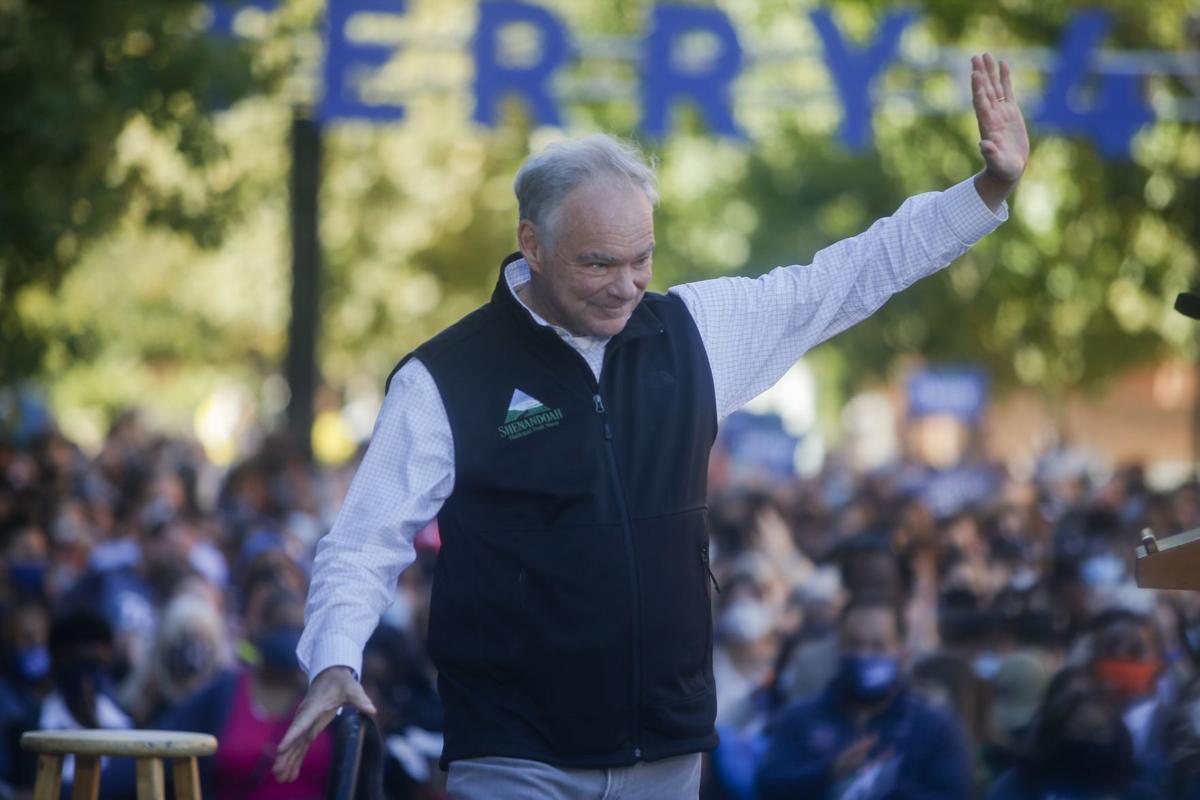 BELOW: U.S. Sen. Tim Kaine, D-Va., spoke about the Jan. 6 riot at the Capitol, calling it “an attack to stop the certification of the votes of 80 million people.” 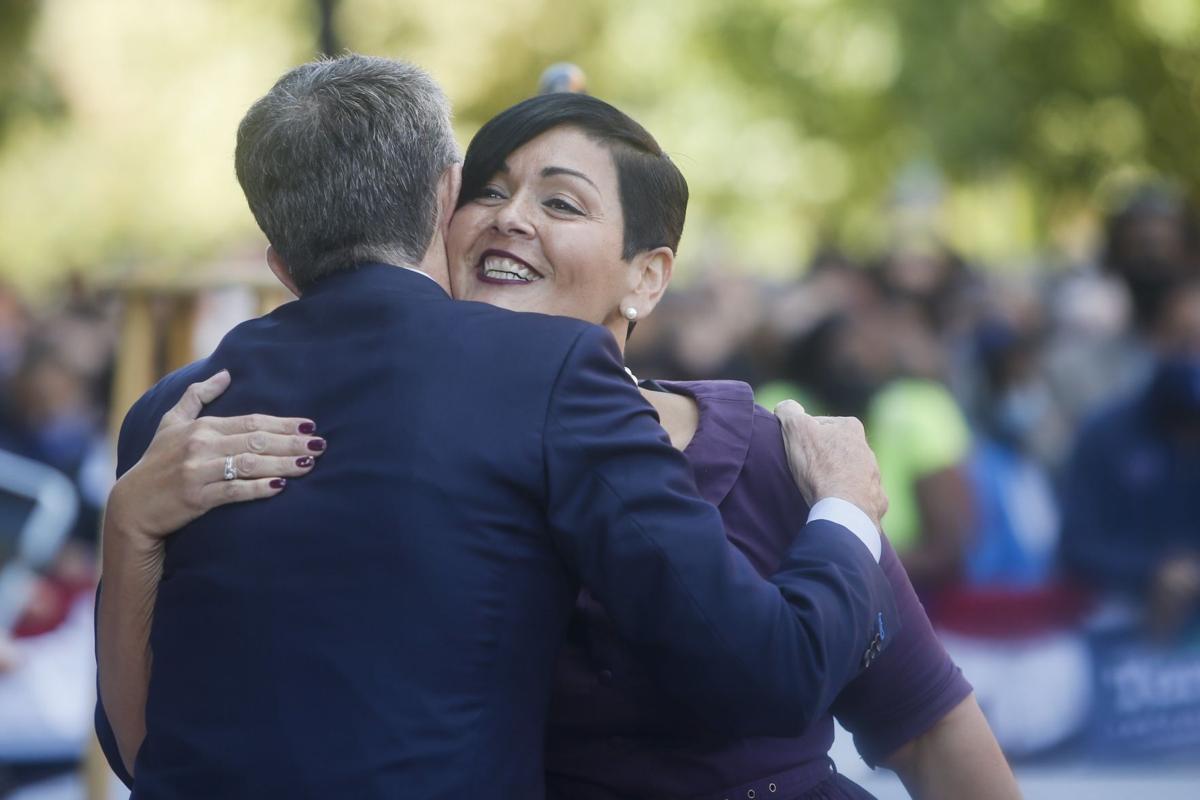 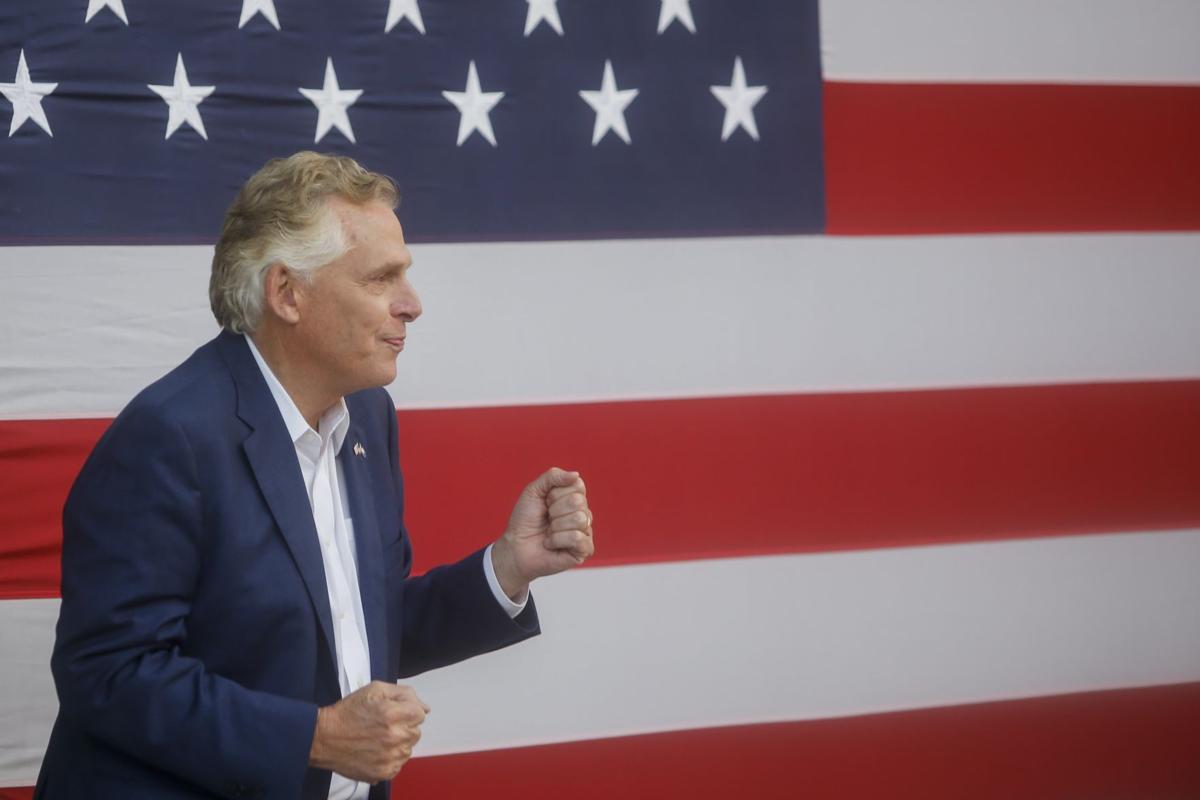 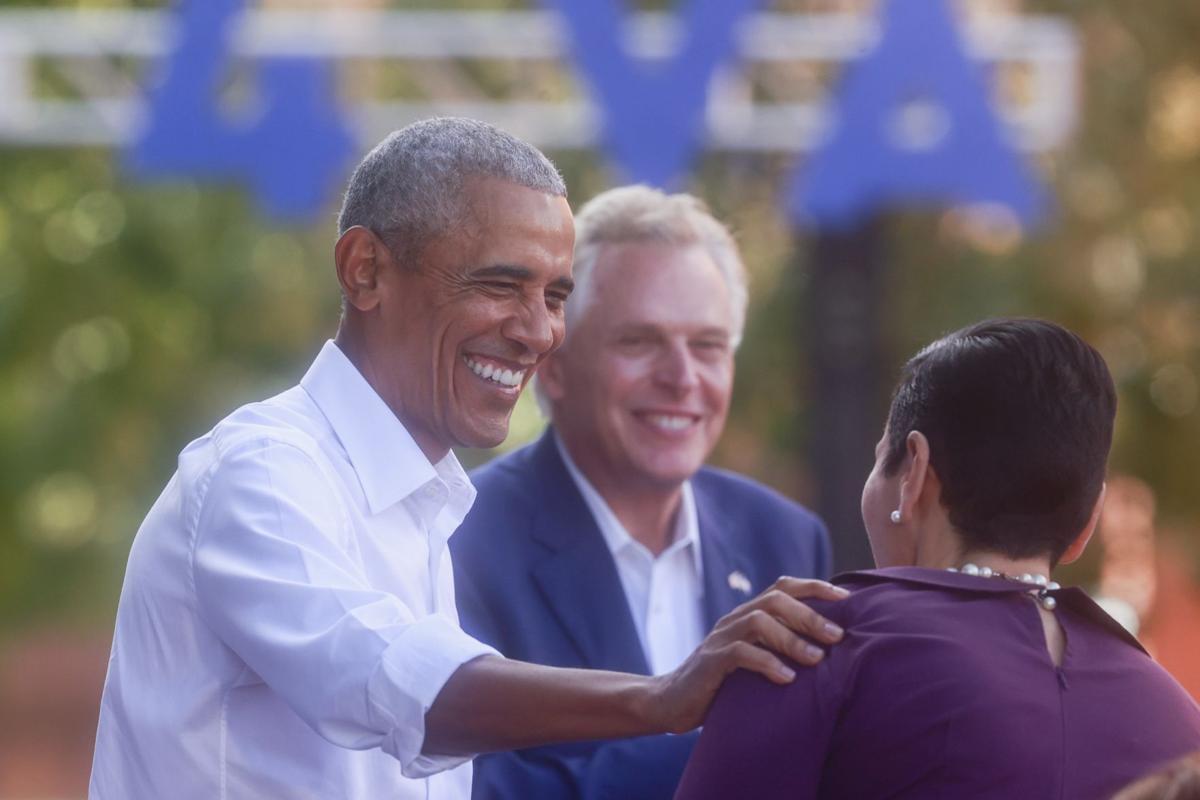 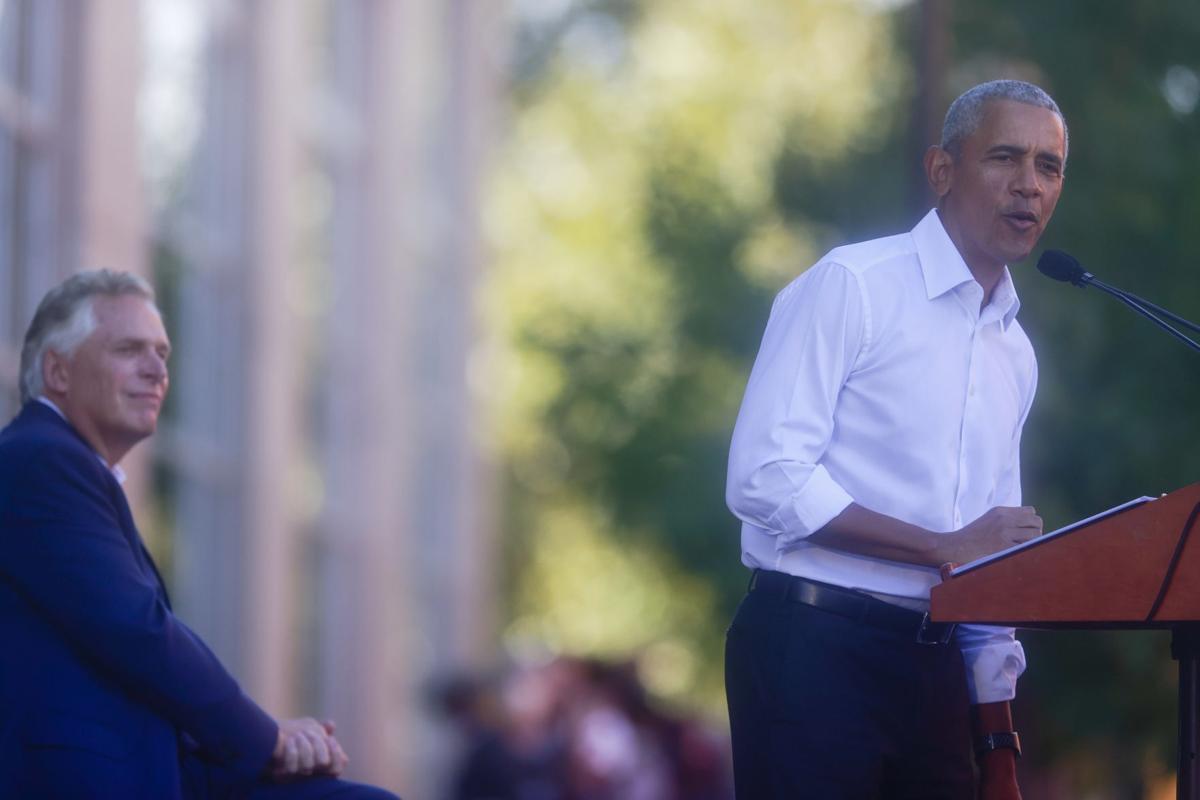 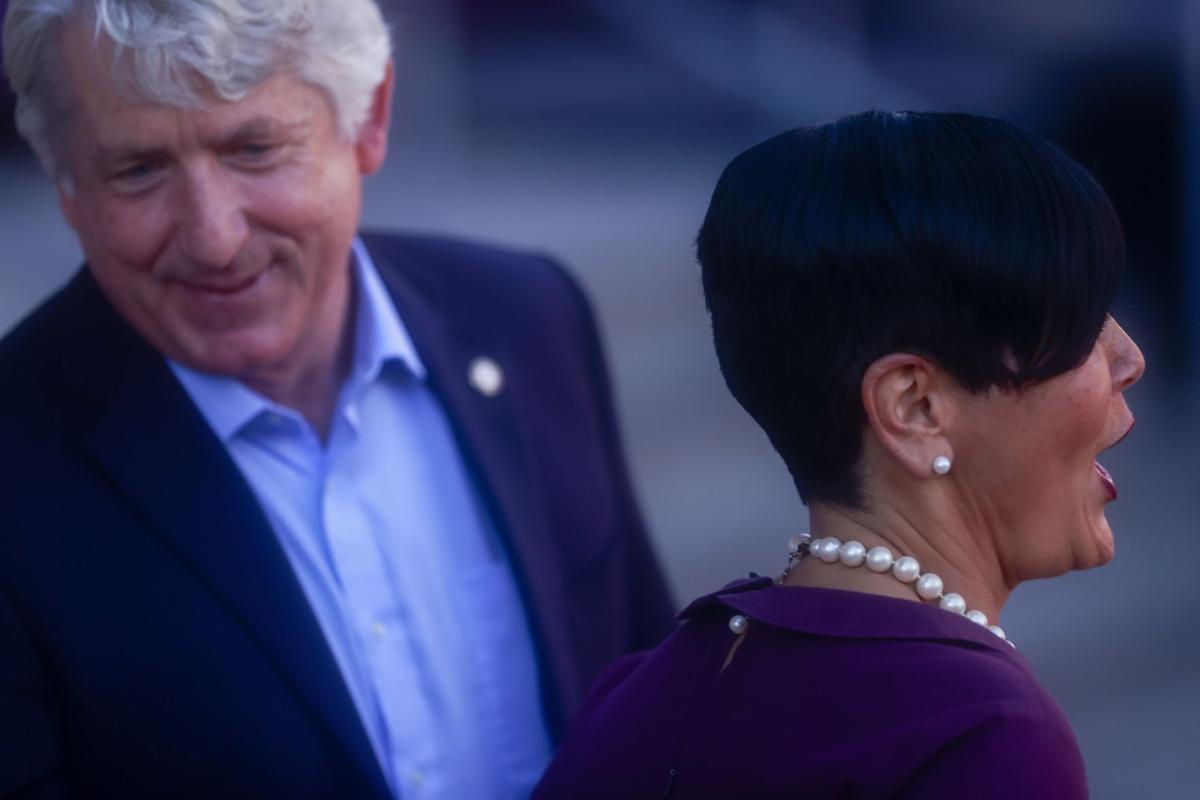 Attorney general candidate Mark Herring makes his way to his seat as Lieutenant governor candidate Hala Ayala makes her way to the podium to give remarks during a rally on Saturday, October 23, 2021 at James Branch Cabell Library in Richmond, Virginia. 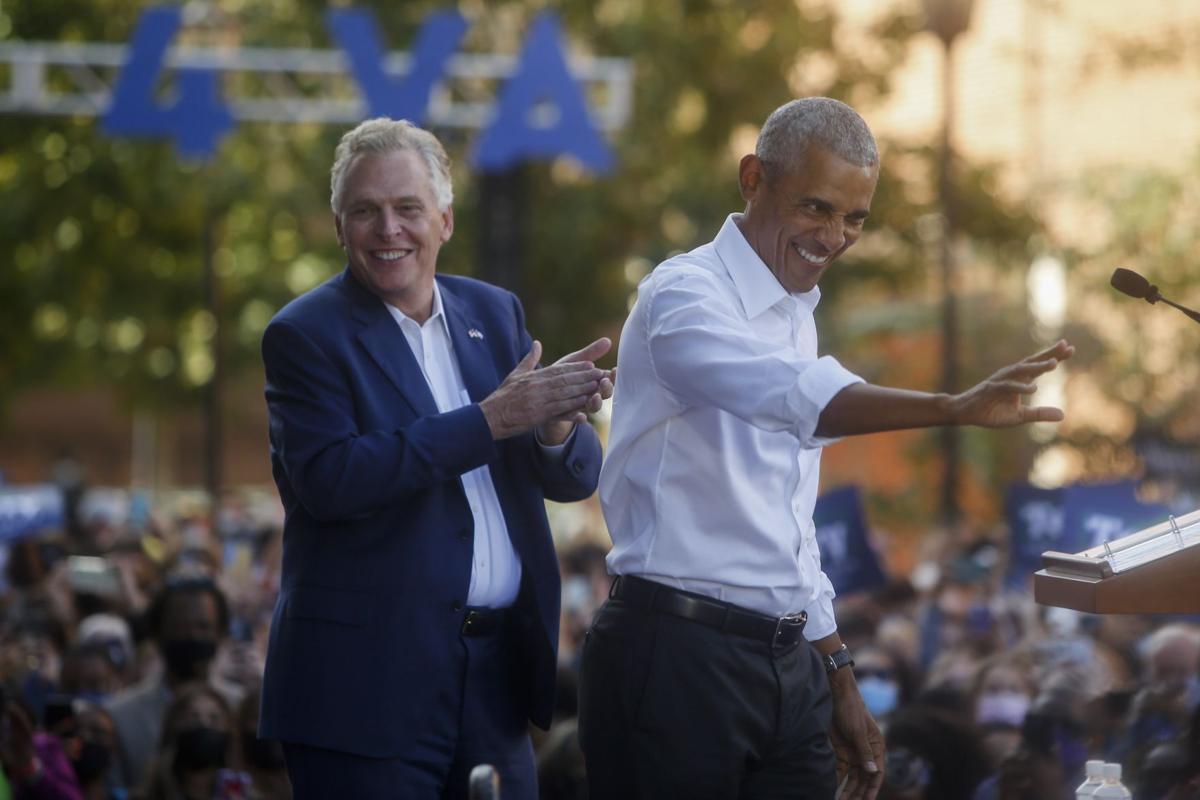 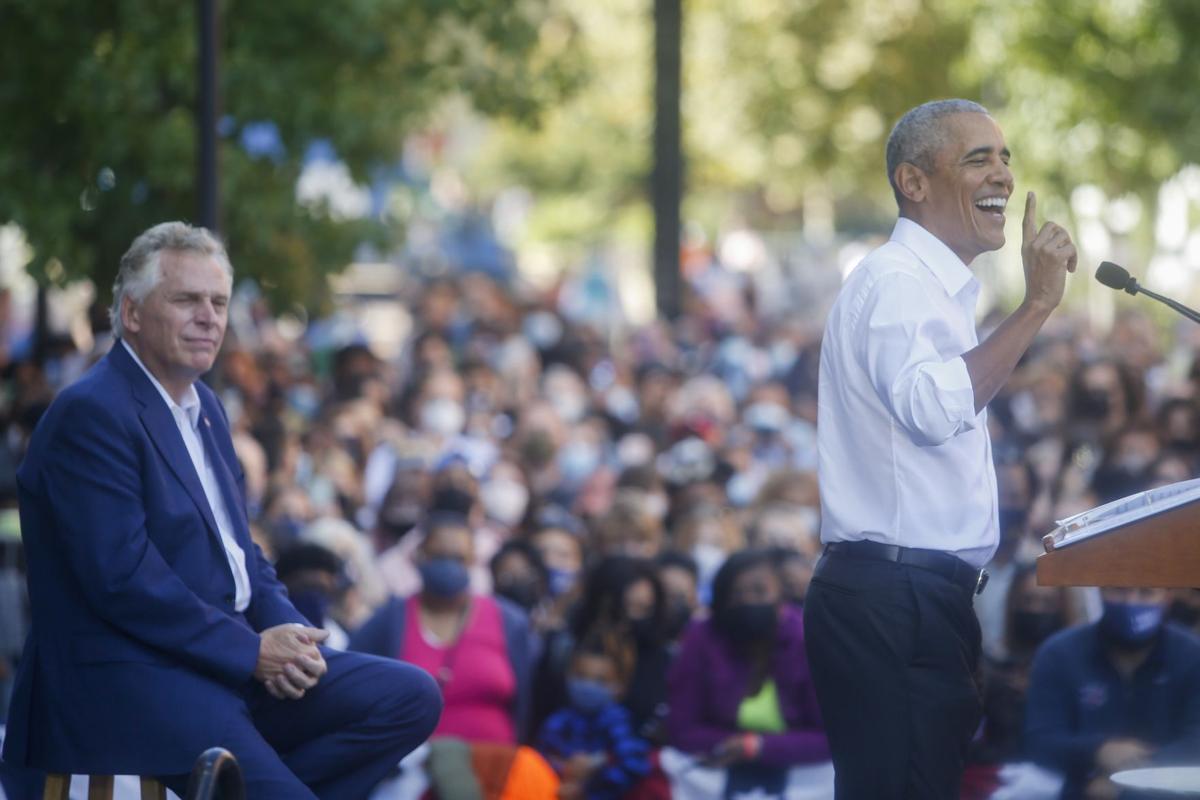 ABOVE: Former President Barack Obama spoke in Richmond on Saturday on behalf of Democratic gubernatorial nominee Terry McAuliffe. Obama is the latest big-name Democrat to stump for McAuliffe in the race.

Former President Barack Obama visited Richmond on Saturday to rally Democratic voters in the tight race between party nominee Terry McAuliffe and Republican Glenn Youngkin, attacking the GOP nominee as a candidate who’s courted support from those who push “lies and conspiracy theories” about the 2020 presidential election.

Obama’s visit came 10 days before the Nov. 2 election, and the former president encouraged hundreds outside James Branch Cabell Library at Virginia Commonwealth University to vote by mail, vote early in person, work for the Democratic ticket and encourage others to vote.

“I could not be happier that Terry’s back on the ticket,” Obama said. “I know he will make you proud as governor because he’s already done it.”

Obama is the latest in a succession of prominent Democrats who have campaigned with McAuliffe, seeking to push Democratic turnout in the homestretch, including first lady Jill Biden; Stacey Abrams, Georgia’s 2018 nominee for governor; and Vice President Kamala Harris.

President Joe Biden will campaign with McAuliffe on Tuesday in Arlington County a week before Election Day.

Republicans are seeking their first statewide victory in Virginia since 2009.

Elizabeth Ray, a spokesperson for the Republican National Committee, said in a statement: “While Terry McAuliffe desperately stumps with another liberal celebrity, Republicans are on the ground talking to Virginians at their doors. No matter who Terry McAuliffe brings out, it won’t change the fact that Virginians are tired of McAuliffe’s recycled policies and broken promises.”

A stream of Democratic officials on Saturday promoted their support for expanded health care, legal abortion, more education funding and new laws expanding voting since they won control of the legislature in 2019. Democratic Gov. Ralph Northam reminded the crowd that Democrats legalized recreational use of marijuana for adults.

Obama said Democrats want increased access to voting while Republicans try to win by hindering it.

“Why is it Republicans don’t want you to vote? What is it they’re so afraid of?” he said.

He charged that they can’t win on their ideas so they create phony controversies.

“Instead, you’re trying to rig elections. Because the truth is, people disagree with your ideas. And when that doesn’t work, you start fabricating lies and conspiracy theories about the last election — the one you didn’t win. That’s not how democracy’s supposed to work.”

Obama criticized Youngkin for calling for an audit of Virginia’s voting machines. There is no evidence of fraud in the 2020 Virginia election, the results of which have already been backed up by an audit.

“Really?” Obama said. “Encouraging the lies and conspiracy theories that we’ve had to live through all this time? And yet we’re supposed to believe he’s going to stand up for our democracy?”

Some Republicans held a rally in Henrico County on Oct. 13 in which former President Donald Trump called in. Participants said the Pledge of Allegiance to a flag that the emcee said was carried at Trump’s Jan. 6 rally in Washington, after which many of his supporters led a violent attack on the U.S. Capitol in an attempt to stop the certification of Biden’s election.

Obama called Jan. 6 “the biggest threat to democracy in my lifetime.” (Youngkin, who did not attend the Henrico rally, called it “weird and wrong to pledge allegiance to a flag connected to January 6.”)

Obama said Youngkin’s attempts to cultivate support from those who believe in election conspiracies raised a question about Youngkin’s character.

“You can’t run ads telling me you’re a regular old hoops-playing, dish-washing, fleece-wearing guy, but quietly cultivate support from those who seek to tear down our democracy,” Obama said. “Either he actually believes in the same conspiracy theories that resulted in a mob, or he doesn’t believe it, but he’s willing to go along with it to say or do anything to get elected. And maybe that’s worse.

“Because that says something about character. And character will end up showing when you actually are in office. ... When are you willing to say, there are some things more important than getting elected, and maybe American democracy is one of those things.”

McAuliffe, joined at the rally by his wife, Dorothy, said he wanted another term in office to raise the state’s minimum wage, push for paid sick leave and family medical leave for workers, raise teacher pay, and expand access to health care. He slammed Youngkin’s opposition to legal abortion in most cases.

(The Associated Press reported that in an interview, Youngkin said he feels “called to love everyone.” Asked whether that indicates support for same-sex marriage, he responded: “No,” but added that gay marriage is “legally acceptable” in Virginia.)

Northam and Sen. Tim Kaine, D-Va., also highlighted the Jan. 6 Capitol insurrection. Kaine recounted how he was among members of Congress and staff members who had to barricade in the Capitol when the building was under attack.

BELOW: U.S. Sen. Tim Kaine, D-Va., spoke about the Jan. 6 riot at the Capitol, calling it “an attack to stop the certification of the votes of 80 million people.”

Attorney general candidate Mark Herring makes his way to his seat as Lieutenant governor candidate Hala Ayala makes her way to the podium to give remarks during a rally on Saturday, October 23, 2021 at James Branch Cabell Library in Richmond, Virginia.

ABOVE: Former President Barack Obama spoke in Richmond on Saturday on behalf of Democratic gubernatorial nominee Terry McAuliffe. Obama is the latest big-name Democrat to stump for McAuliffe in the race.