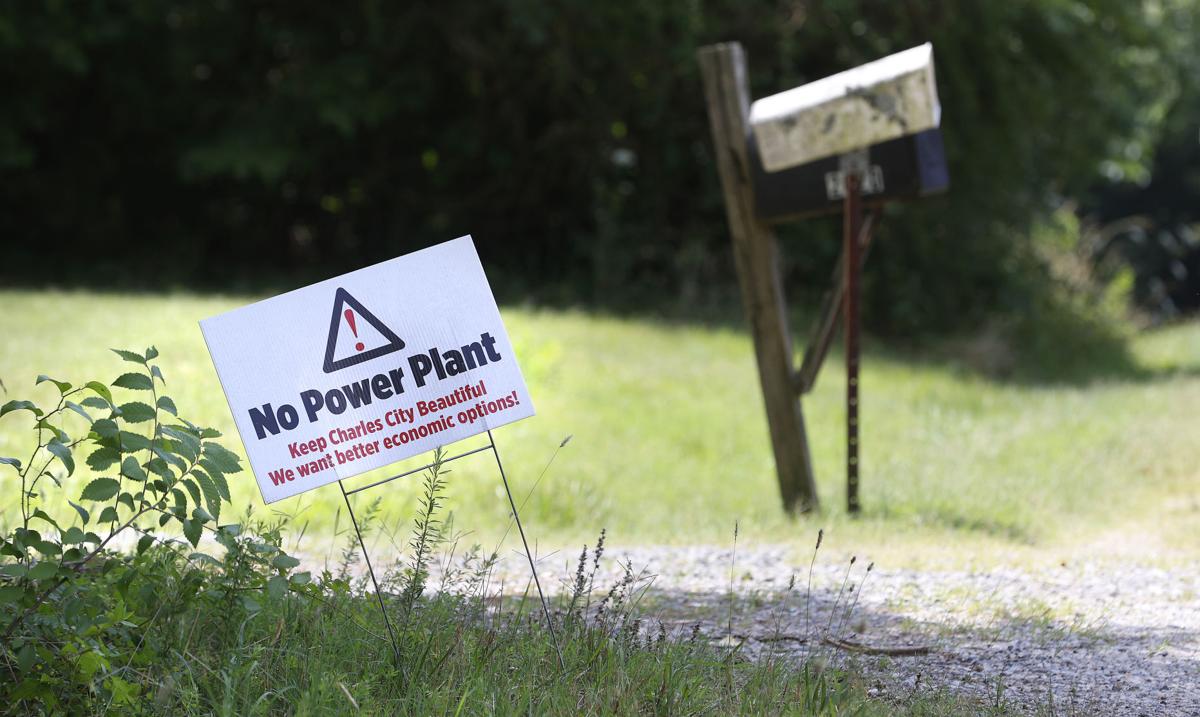 A sign posted in Charles City in June opposed power plants in the county. The developer of the proposed C4GT plant said Friday that it will not pursue the project that would have brought natural gas via pipeline to the county to be burned to create electricity. 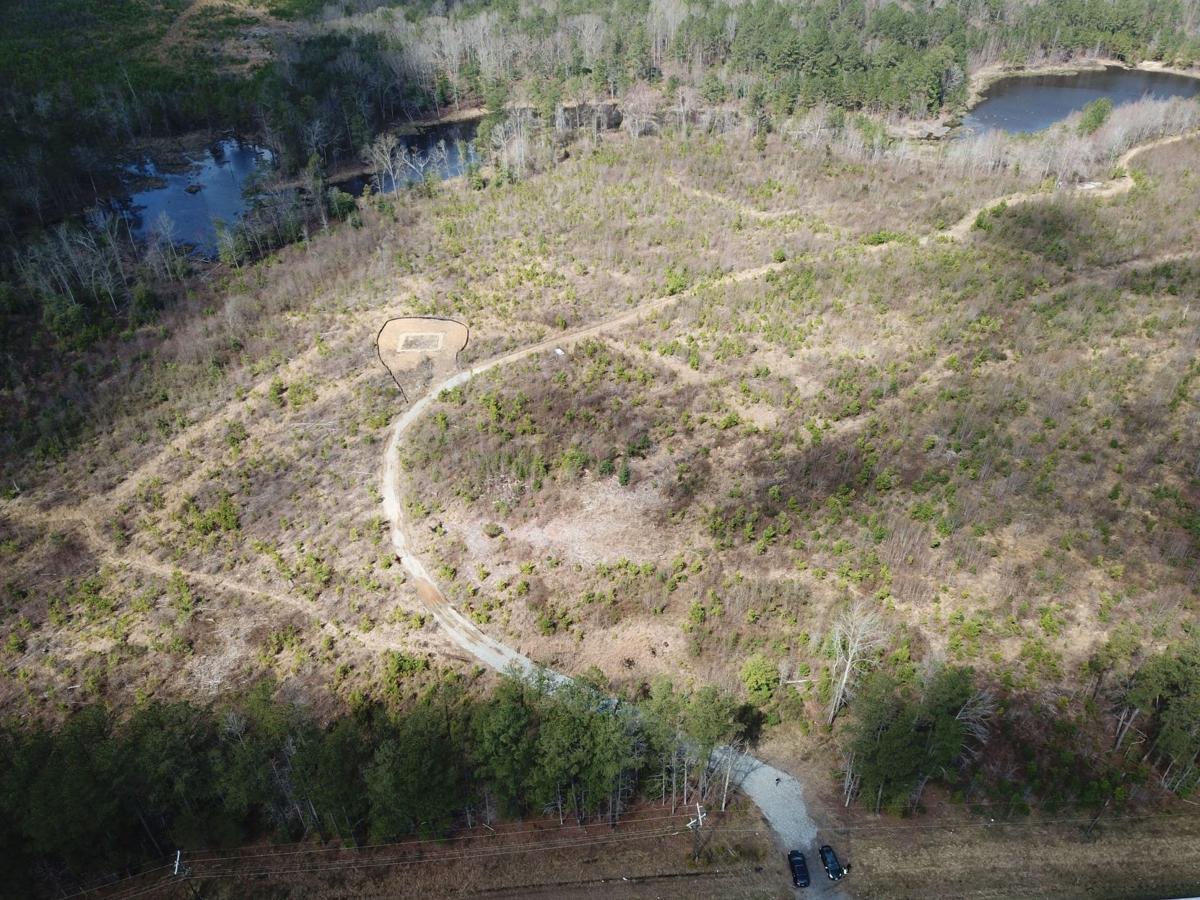 The developers of a natural gas plant in Charles City County, called C4GT, built a concrete pad in December, shown in this March photo. Even though they’re supposed to maintain continuous construction to keep their permit, leadership of Virginia’s Department of Environmental Quality has not revoked it. (Photo by Ben Cunningham/Blue Ridge GeoGraphics LLC)

The developer of a proposed natural gas plant in Charles City County said Friday that it is no longer pursuing the project.

The move was welcomed by people in the county who say they don’t want more fossil fuel pollution. Opponents say local and state officials haven’t been transparent about the proposal and a plan for a second plant a mile away.

The proposed C4GT power plant was backed by private investors and would have brought gas via pipeline to the county to be burned to create electricity. Michigan-based NOVI Energy, the company that wanted the project, announced it is moving on.

“NOVI Energy cares deeply about the communities it serves and the affordable, reliable power facilities it helps build,” read a statement from a communications firm representing the company. “After taking feedback from the community and assessing the changing market, NOVI Energy has decided not to pursue the C4GT power plant.”

Wanda Roberts, who lives in Charles City and is helping lead opposition to the plants, said the announcement took her breath away.

“We were praying and hoping this was going to happen,” she said. “We were told from the very beginning ... that it’s a done deal, there’s nothing anybody can do to stop this plant from coming.”

County government officials were already in the process of taking back land where the plant would go, but until Friday the plan appeared to still be on the table.

Previous reporting by the Richmond Times-Dispatch showed that while regional inspectors at the Virginia Department of Environmental Quality were ready to revoke the C4GT plant’s permit because they found it out of compliance, DEQ Director David Paylor opted to keep the permit alive with a warning that it could be revoked. The plant had not done any construction since early December, in apparent violation of its permit.

While the plant could have been profitable for investors, environmental groups like the Southern Environmental Law Center say it didn’t appear to be necessary for Virginia’s electricity needs.

The two proposals for gas plants opened a divide between residents who don’t want toxic pollutants in their air and county government leaders who back the proposals because they would provide significant tax revenue in the rural county.

The remaining proposal, called Chickahominy Power, would be built about 23 miles from downtown Richmond and would be larger than any of the natural gas plants operated by Dominion Energy, the state’s largest electric utility.

Rep. Don McEachin, D-4th, said in a statement that the company’s decision is good news for “low-income communities, and communities of color, who disproportionately suffer the health effects of harmful, toxic pollution.”

Despite the welcome news for residents who are pleased about C4GT being off the table, a new mystery has surfaced. A company called Chickahominy Pipeline, which is tied to Chickahominy Power, has sent letters to property owners saying it is planning a gas pipeline through Charles City, Hanover, Henrico, Louisa and New Kent counties and needed to go onto their property. That development was first reported by the Virginia Mercury.

People who got the letters, from an address in Herndon, say they have never heard of Chickahominy Pipeline, exactly what it would serve, and haven’t seen a proposed route.

On the local level, the Charles City County Board of Supervisors voted in April to “revert” 88 acres of land the county gave to C4GT in 2015 for the plant.

Johnson, in response to questions from the DEQ, wrote on April 30 that she had spoken to Anand Gangadharan, president of the C4GT company.

“He informed me that his project has not been successful as he would like it to be,” she wrote to the DEQ.

Johnson and Gangadharan discussed the company returning the property to the county, and Gangadharan agreed, she wrote, but said he would not pay a $150,000 penalty established in the agreement.

“He requested that I keep it quiet; however, the Supervisors’ action had to be public,” Johnson wrote.

The county as of Friday was waiting for C4GT’s lawyer to sign off on the land transfer back to the county.

“We are, of course, dismayed at the problems that arose at the end to make the project impractical, wasting the enormous time and effort you and your company put into it,” county attorney B. Randolph Boyd wrote to the C4GT president in June.

Johnson said the county agreed to waive the $150,000 penalty in order to quickly get the land back. She said she’s now talking to developers about bringing something to the location on Roxbury Road that is not related to energy.

She also said she and the Board of Supervisors are hearing citizen concerns and trying to be transparent.

“The Board of Supervisors and I have learned that we have to bring forth communications better so that people can see what we’re doing,” she said. “We’ve learned a lot of hard lessons from the power plant projects, in doing more outreach.”

In 2020, the Virginia General Assembly passed an environmental law called the Clean Economy Act that will eventually curtail the use of natural gas to create power. But under the law, the Chickahominy gas plant in Charles City, if built, could operate through 2050.

Roberts, the retired paralegal who is helping lead opposition, is active in Concerned Citizens of Charles City County and spent several hundred dollars in fees making FOIA requests to the county. She said people first found out about the two gas plant plans in mid-2019 via the groups Mothers Out Front and the Sierra Club.

“We constantly get, ‘Well, I don’t know,’” said Roberts, referring to citizen requests for information. “It gets just so frustrating that you go in circles.”

In 2019, about 30 people gathered at a library to discuss the two power plants, and that led to the formation of the citizens group, she said. A few days later, they attended a meeting of the Virginia State Air Pollution Control Board to consider Chickahominy Power, but most of them were not allowed to speak, Roberts said.

Roy Hoagland, an environmentally friendly member of the air board, was the only one to vote against the permit in 2019. He said at the hearing that the proposal hadn’t had proper input and that the board should have proactively reached out to the African American community about it. (Gov. Ralph Northam replaced Hoagland on the board last month.)

A sign posted in Charles City in June opposed power plants in the county. The developer of the proposed C4GT plant said Friday that it will not pursue the project that would have brought natural gas via pipeline to the county to be burned to create electricity.

The developers of a natural gas plant in Charles City County, called C4GT, built a concrete pad in December, shown in this March photo. Even though they’re supposed to maintain continuous construction to keep their permit, leadership of Virginia’s Department of Environmental Quality has not revoked it. (Photo by Ben Cunningham/Blue Ridge GeoGraphics LLC)