Subscribe
Read Today's E-Edition
Share This
Richmond has removed the most Confederate symbols in the country since the killing of George Floyd. Here's how it happened
0 Comments
Share this 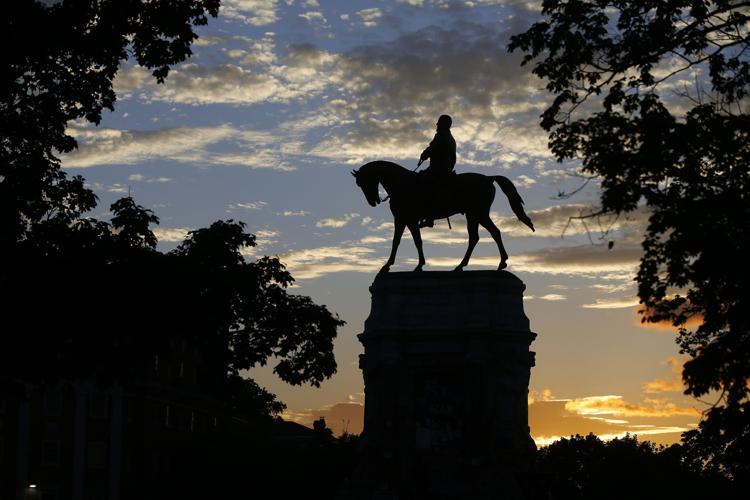 The Robert E. Lee monument is the last Confederate statue standing on Monument Avenue in Richmond. 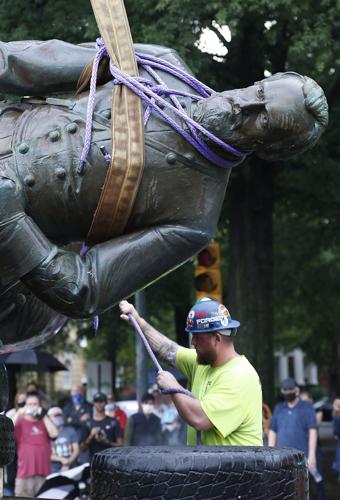 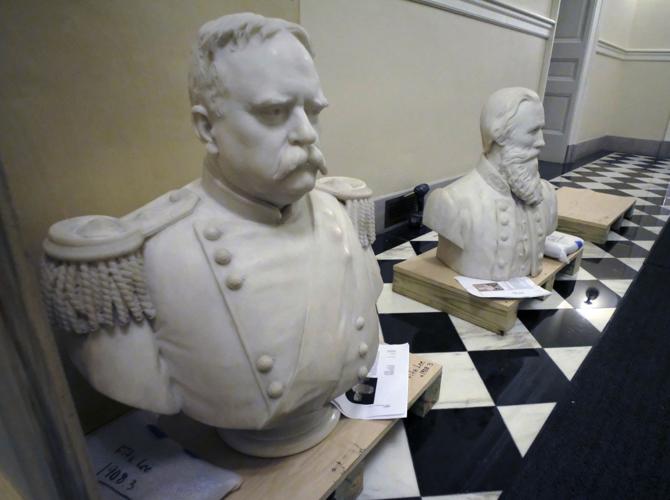 Since the killing of George Floyd and the nationwide racial reckoning that blanketed the U.S. after May 25, Virginia has removed the most Confederate symbols — 26 total — in the country.

Richmond did away with 18 of them, more than any other city in the U.S., according to a study done by the Southern Poverty Law Center.

But the research also shows that Virginia’s 218 remaining Confederate symbols are the most in the nation, a reminder that the state was home to the capital of the Confederacy and was the site of major Civil War battles.

While the removal of monuments — which have been contested since their inception and in conversations that have spanned decades — is not a solution to systemic racism, it’s a prominent symbol, said Stephanie Arduini, director of education at the American Civil War Museum.

The protests that swept the nation after Floyd’s death were a catalyst that turned public opinion enough in favor of removal, Arduini added. Otherwise, it might not have happened.

“Richmonders were ready and continue to push those conversations about how we reckon with a really complicated past ... how we carry that with us,” Arduini said. “They see that these statues have meant harm and trauma and depression to so many Richmonders that they’ve decided this is better for Richmond.”

Nationwide, 76 Confederate symbols — 48 of them monuments — were removed from public spaces this year. But the Confederacy is visible in the country 155 years later through monuments, street names and schools, with nearly 1,800 of its symbols still on public land. Almost 700 of those are monuments.

Those numbers fluctuate, said Lecia Brooks, chief of staff for the Southern Poverty Law Center. And many are in the process of being removed or renamed.

On Friday, Stonewall Jackson Cemetery was renamed in Lexington. A bronze statue of an unnamed Confederate soldier in Albemarle County will be removed Sept. 12. Richmond is considering renaming the Robert E. Lee Memorial Bridge that connects South Belvidere Street to Cowardin Avenue.

“The program continues to discover new Confederate symbols across the U.S. and has received upwards of 550 inquiries from the public alerting us to symbols since George Floyd’s death,” Brooks said. “Another challenge is that often localities do not always publicize when symbols are removed or relocated.”

The first Confederate statue to fall in Richmond was a Monroe Park likeness of Williams Carter Wickham, toppled by protesters on June 6. It stood for 129 years.

Days later it was Jefferson Davis — the former president of the Confederacy — on Monument Avenue, yanked down with rope in the hours before midnight on June 10. Davis was propped up almost 50 years after the end of the Civil War and survived for 113 years.

Then protesters knocked the Richmond Howitzers Monument statue from his pedestal, where he had stood bronzed and 10 feet tall since 1912 in Monroe Park.

Protesters made a run for J.E.B. Stuart six days later, one of multiple attempts throughout the first month of demonstrations to topple the Confederate general.

Richmond police declared an unlawful assembly, thwarting efforts that “could have caused serious injuries,” according to a June 21 tweet by the department. Chemical agents followed. Police arrested six people and injured a journalist.

The next day, Mayor Levar Stoney called for the immediate removal of all Confederate iconography from public spaces, citing public safety concerns after nearly a month of uprisings. At the time, state law — which didn’t permit cities to remove monuments before July 1 — meant Stoney could face a felony charge for the decision.

“I’m willing to take that risk,” Stoney said in the June 22 virtual City Council meeting. “If I had Superman strength and could go and arrive at Monument Avenue and remove them by myself and get slapped with a class 6 felony, I would have done that yesterday.”

In 2017, Stoney initially sought to keep the monuments with context added instead of removing or replacing them, a position he reversed following the white supremacist “Unite the Right” rally in Charlottesville that August.

On July 1, the day state law granting city control of the Confederate statues took effect, Stonewall Jackson came down after more than 100 years on Monument Avenue. In the following week, crews hauled off Matthew Fontaine Maury, Joseph Bryan, the Confederate Soldiers and Sailors Monument statue and the “Miss Confederacy” statue on top of a pedestal at the Davis monument.

Then came J.E.B. Stuart. Then a Robert E. Lee bust, along with seven other Confederates, tucked inside the Virginia Capitol, at House Speaker Eileen Filler-Corn’s request.

“The Confederacy’s primary objective in the Civil War was to preserve an ideology that maintained the enslavement of human beings,” Filler-Corn said in a July 24 statement. “Now is the time to provide context to our Capitol to truly tell the Commonwealth’s whole history.”

Three of the 18 Confederate symbols pulled down in Richmond were the result of protests, an action Arduini said is not new in movements.

In the American Revolution, colonists protesting against King George III pulled down a statue of the royal after declaring their own country.

Across the nation, protesters have aimed to unseat other symbols they associate with racism and oppression. In Oregon, demonstrators took down a statue of Thomas Jefferson, the Founding Father from Virginia who enslaved more than 600 Black Americans. The 8-foot Jefferson statue inside the Virginia Capitol that he designed still stands where it was inaugurated in 2012.

In New Mexico, protesters removed one of a colonial governor who mistreated Native Americans. In Richmond, protesters threw the statue of Christopher Columbus into a lake at Byrd Park.

As for Confederate monuments, the largest in the U.S. remains where it was unveiled in 1890 — the first to be installed on Monument Avenue.

The launch of Robert E. Lee on his horse took more than 10,000 to assemble 130 years ago. The state-controlled, nearly 100-foot relic then became a focal point in the city, drawing 150,000 to celebrate its completion. That was more than the city’s population at the time.

The Lee statue — embroiled in a lawsuit that prohibits state removal until at least October — has become the epicenter of a movement, with crowds cloaking the pedestal in graffiti and reclaiming the grassy space into a site with Black ballerinas; projections of Harriet Tubman, Breonna Taylor and Black Union soldiers; voting registration tents; food handed out to people experiencing homelessness; and pickup basketball games.

This summer, thousands came to the former capital of the Confederacy to watch Lee’s bronzed counterparts be eradicated, one by one, from the tree-lined avenue where Black residents were once barred from owning homes.

A statue of A.P. Hill, another Confederate general, still resides in North Side, atop the site where he’s buried. A 60-day injunction initially barred its removal before being thrown out Aug. 26.

Gov. Glenn Youngkin will set the date for a special election, but he said Tuesday that now is not the time for politics.

Funeral for McEachin set for Dec. 7 in eastern Henrico

A funeral is scheduled for Wednesday in eastern Henrico County for Rep. Donald McEachin, D-4th, who died Monday night after representing parts…

On both sides of aisle, McEachin remembered for public service

Friends and colleagues on Tuesday remembered the life and impact of U.S. Rep. A. Donald McEachin, the son of a teacher and military veteran who became a minister, lawyer and trailblazing Virginia political figure known for his deep passion for equality, environmental issues and public service.

Authorities released more information about the gunman they say opened fire at a Chesapeake Walmart on Tuesday, killing six people and then hi…

The Robert E. Lee monument is the last Confederate statue standing on Monument Avenue in Richmond.