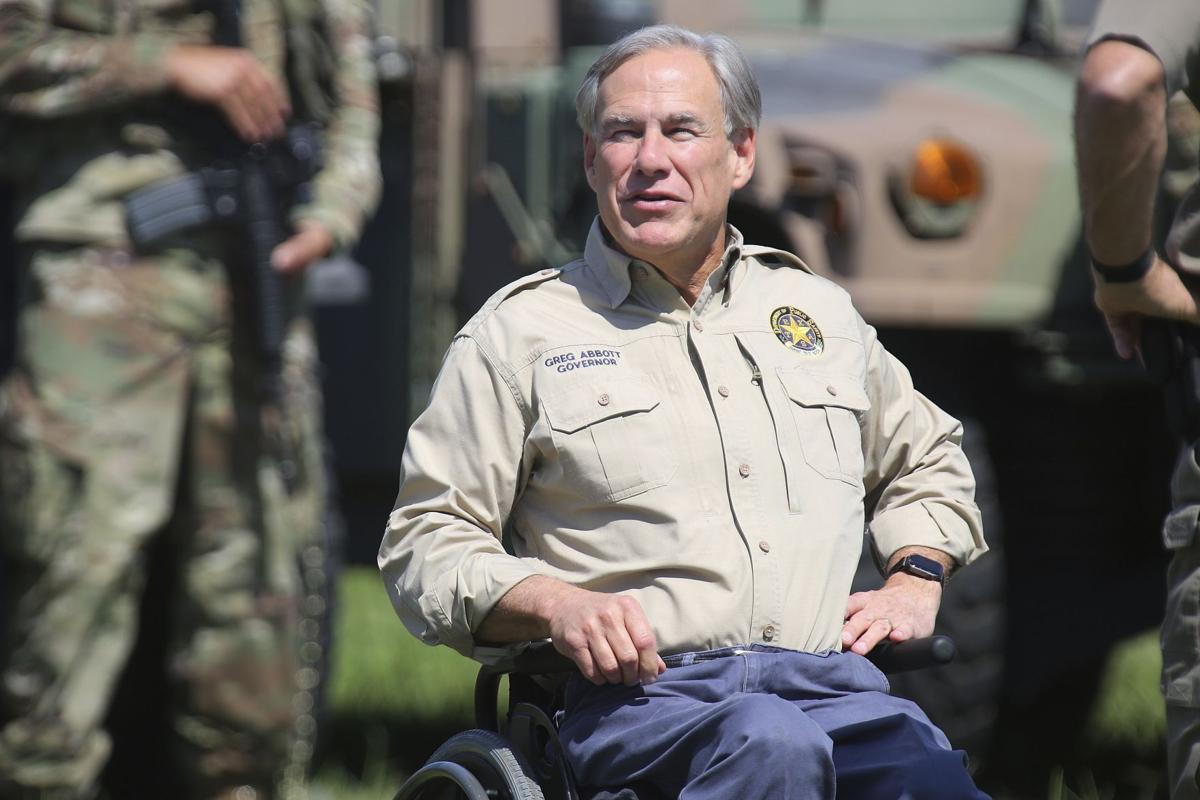 Texas Gov. Greg Abbott, joined by 10 other governors, arrived at a news conference at Anzalduas Park in Mission, Texas, on Oct. 6. On Monday, Abbott declared that all public and private entities could not mandate COVID-19 vaccinations for employees and customers.

The eyes of Texas are upon us — and those of 49 other states and Washington, D.C.

The sharply competitive race for Virginia governor, between rich-guy rookie Glenn Youngkin and hell-raising retread Terry McAuliffe, is viewed by the outside world as an early barometer of the arc of national politics — specifically, whether Democrats will crash and burn in 2022 and 2024.

But it is beyond Virginia’s borders that many of the issues shaping the Youngkin-McAuliffe hissing match are originating, creating obstacles and opportunities for the candidates. An especially fertile field: Texas, the nation’s second-largest state, one that’s deeply red and has produced Youngkin’s sometimes trail pal Ted Cruz.

Texas is delivering again — and again Youngkin is ducking.

On Monday, Gov. Greg Abbott of Texas declared that all entities — public and private — could not mandate COVID-19 vaccinations for employees and customers, putting him on a collision course with the Biden administration and some very big businesses.

Abbott, apparently to protect his far right ahead of next year’s GOP primary, expanded an order issued in July banning local and state agencies from requiring jabs. Abbott, who has been vaccinated but contracted the virus, junked a mask mandate in March, though he’s been thwarted by the courts.

It’s not something Youngkin, an opponent of mandates who has been vaccinated and recommends jabs, wants to talk about. And it’s not the first issue to boil over from Texas to Virginia on which Youngkin, a chameleon on plaid, affects a shade of red intended to satisfy Republicans and not scare swing voters.

The question on a possible gubernatorial directive was put somewhat differently to O’Malley when asked for a clarification:

So, Youngkin would not sign an executive order preventing employers from requiring workers to wear masks or submit to mandatory vaccinations, even though he believes shots should be optional? How would Youngkin protect the presumed rights of workers to refuse vaccines?

Can’t imagine Youngkin, if only for calculated political purposes, would quarrel with that. Pick an issue — including those bubbling up from Texas: open-carry of firearms, abortion, voting rights, COVID-19 — and you’ll see Youngkin parses his position to satiate not just Trump absolutists, movement conservatives or traditional Republicans, but all of the above.

As John Fredericks, the conservative broadcaster and Trump’s Virginia campaign manager, told The New York Times Tuesday, “Glenn Youngkin is the candidate that’s been able to straddle both sides of the party. And so far he’s given us just enough where we can enthusiastically vote for the guy.”

Youngkin will be what you want him to be. It’s a sales technique, for sure, though his handlers bristle at suggestions Youngkin is a salesman. But one doesn’t accumulate a half-billion-dollar fortune on Wall Street — more than $16 million of which has been pumped into Youngkin’s campaign — without selling something.

For McAuliffe, whose enthusiasm for widely supported vaccine requirements makes the Virginia campaign a referendum on fellow Democrat Ralph Northam’s response to the pandemic, Youngkin’s latest maneuvering can only mean the Republican wouldn’t rule out an Abbott-like order.

“Glenn Youngkin is a Trump-style anti-vaxxer who has encouraged his own supporters to avoid getting the vaccine,” said Jake Rubenstein, a McAuliffe senior adviser. “Virginians can only assume Glenn would follow Greg Abbott’s lead and issue a deadly ban on vaccine mandates as governor.”

Northam has used his executive and emergency powers from the start of the pandemic in March 2020 to get protective gear to health care workers; to control spread of the virus through limits on public gatherings, restaurants and bars, requiring masks and mandating shots for 122,000 state employees and testing for those unvaccinated.

Perhaps it’s blotted out by his shrill Youngkin-is-Trump rants — and they’re all about invigorating a lethargic Democratic base — but McAuliffe, a former governor, has focused on reining in the ’rona and positioning Virginia for a fuller recovery from the plague, warning that it’s not a job to entrust to someone ignorant of the state bureaucracy.

Youngkin’s unfamiliarity with government is as good a reason as any for him to steer clear of the Abbott executive order. Youngkin’s vow to ban by executive order the teaching of critical race theory in public schools illustrated just how little he knows about a governor’s constitutionally limited power — in this instance, over curricula.

And Youngkin, in the campaign’s finale, would rather make the case that, when it comes to public schools, McAuliffe stands with the teachers unions rather than parents.

Youngkin is betting education could be McAuliffe’s Alamo.

Texas Gov. Greg Abbott, joined by 10 other governors, arrived at a news conference at Anzalduas Park in Mission, Texas, on Oct. 6. On Monday, Abbott declared that all public and private entities could not mandate COVID-19 vaccinations for employees and customers.