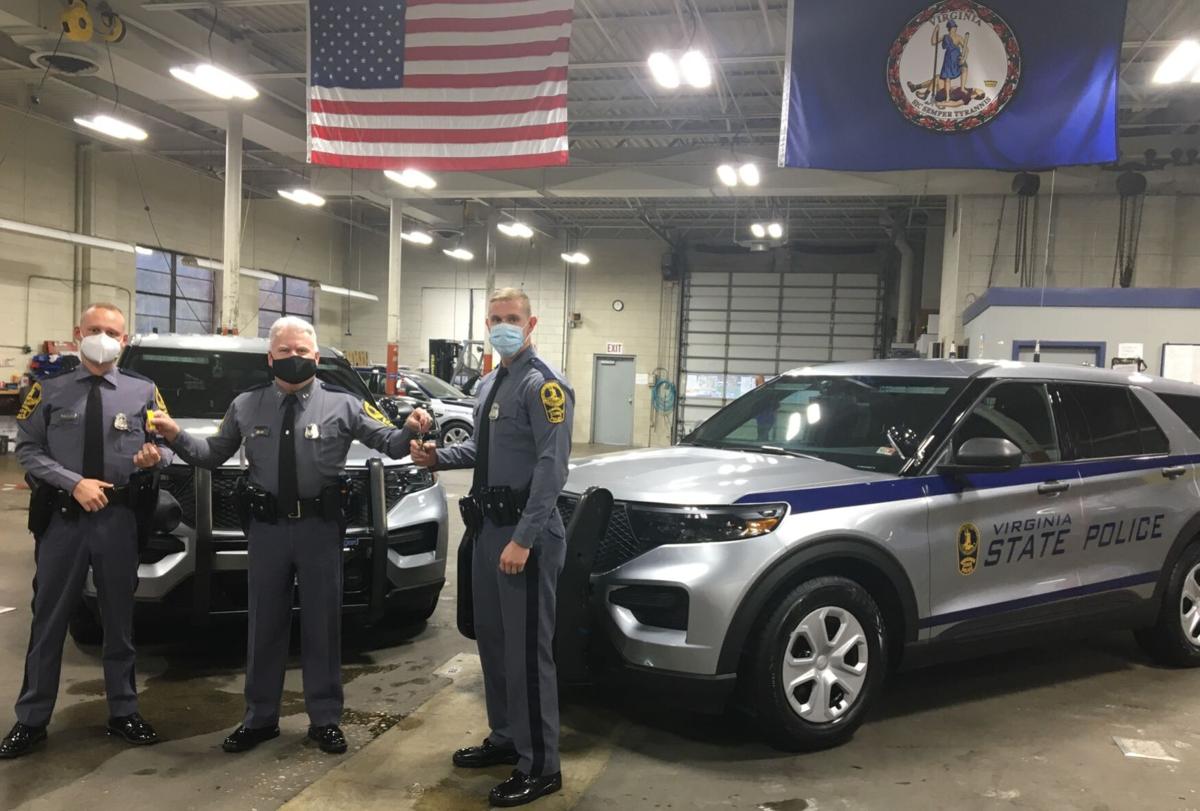 In a Nov. 23 posting on Twitter, Virginia State Police announced Trooper J.E. Perry, who covers Lexington, and Trooper T.W. Eastridge, who works in Chatham, were the first troopers to be issued the new Ford Interceptor SUVs. 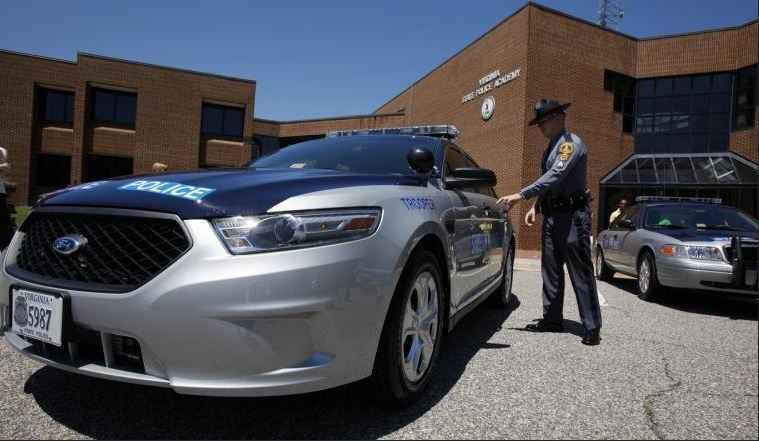 In 2012, Virginia State Police Sgt. G. Michael Jenkins Jr. checks out one of the then-new Ford Taurus police cruisers that will replace the Crown Victoria models, one of which is at right.

The familiar silver-gray-and-blue police sedans driven by state troopers on Virginia’s roads are being phased out, perhaps for good, as the department transitions its fleet to Ford Interceptor SUVs as a matter of necessity.

Faced with Ford Motor Co.’s decision to end production of its popular Taurus Police Interceptor sedan, state police officials said they had little choice but to convert to an all-SUV fleet — after other vehicles tested failed to meet the department’s needs.

The department has purchased 204 of the Ford SUV Interceptors — essentially a high-performance version of the Ford Explorer — and a pending $9.5 million funding request before the General Assembly would go toward the purchase of 400 more of the vehicles in fiscal year 2021-22. The additional funding is included in both the Senate and House versions of the amended state budget that legislators are now reviewing during the special session.

Although the department is moving to acquire a fleet of SUVs, the department said it will continue to evaluate and test other makes and models of police package vehicles as they enter the market.

The purchase of the SUVs signals an end to the department’s decadeslong reliance on sedans for traffic enforcement and other patrol operations in Virginia.

The department has used the Ford Taurus as its vehicle standard-bearer for nearly a decade.

After Ford in 2011 stopped making the Ford Crown Victoria Police Interceptor — which reigned as king of police fleets across the country for 20 years — state police switched to the Ford Taurus.

Then after Ford discontinued production of the Taurus in 2019, the agency began to search for suitable police pursuit-rated patrol vehicles to replace it.

“The department is just shy of its 90th anniversary and over the decades we have transitioned from motorcycles to convertible coupes to two-door Plymouth Furys to the four-door Ford Crown Victoria,” state police Superintendent Gary Settle in an email. “The look, fit, feel and handling of the sport utility vehicle have been a change for our sworn troopers and supervisors.”

“We tested many vehicles and it was determined the Ford SUV was the best option for our troopers based on vehicle safety, dealer support, maintenance, performance and overall costs of ownership,” he said. “As a result of this effort, we have redesigned our driver training program to accommodate for the SUV and its unique features.”

Police spokeswoman Corinne Geller noted the costs of the new SUV patrol vehicles increased 51% from the 2019 Taurus sedans, “and to further complicate matters, due to the redesign of the vehicle, most of the supplemental emergency equipment historically reused (and transferred) from vehicle-to-vehicle with the previous model is not compatible with this newly-designed model.”

The current $9,488,184 budget request before the General Assembly will “address this unavoidable cost increase,” Geller said.

The Ford SUVs cost $38,000 each, compared to $25,000 for the Taurus sedans. “The SUVs are about $13,000 more per unit ... and the department also has a plan to replace the vehicles sooner to avoid some of the maintenance costs,” a Senate Finance Committee staff member told legislators last month.

At that Jan. 20 meeting, Brian Moran, Virginia’s secretary of public safety and homeland security, told the panel that state police considered other vehicles, including the Dodge Charger police pursuit sedan. But the Charger’s HEMI V-8 engine interfered with Virginia’s Statewide Agencies Radio System, or STARS, which state police use for emergency communication, Moran said. Consequently, the Charger was dropped from consideration.

The Charger, currently the only police-package sedan made in the U.S., also raised reliability concerns among state police officials, who cited the experience of other law enforcement agencies.

The only two remaining options were the Ford Interceptor SUV and the Chevrolet Tahoe police pursuit vehicle. The Tahoe was dropped after the department test-drove the vehicles and found them prone to “body roll and sway during rapid maneuvers,” the department wrote in its budget request.

State police in November rolled out the first two Ford Interceptor SUVs, assigning them to two troopers based in Lexington and Chatham.

The 204 SUVs the department now has in its possession are equipped with 3.0-liter EcoBoost turbocharge engines with 400 horsepower that get an estimated 17 mpg in the city and 22 on the highway. The vehicles have a top speed of 150 mph and can reach 60 mph in 5.77 seconds.

Ford’s standard police SUV model has a 3.3-liter hybrid electric vehicle engine, which state police said they may test later this year. But for now, the agency has no plans to purchase a large number of the hybrid SUVs.

“If we test the hybrid and it meets our needs, we may consider these vehicles in the future,” Geller said.

Settle noted that because the interior of the new SUVs is so different from that of a traditional sedan, it has required a great deal of research by the department’s communication division and specialty units.

“They have done a remarkable job with securing and rearranging the vehicle’s radio, emergency mobile data terminal, tactical and specialty equipment for the troopers’ optimal access and safety,” Settle said.

Gov. Ralph Northam announced Wednesday the loosening of some public COVID-19 restrictions, including the lifting of a stay-at-home curfew and …

UPDATE: Senate and House vote to back future legalization of marijuana

In a Nov. 23 posting on Twitter, Virginia State Police announced Trooper J.E. Perry, who covers Lexington, and Trooper T.W. Eastridge, who works in Chatham, were the first troopers to be issued the new Ford Interceptor SUVs.

In 2012, Virginia State Police Sgt. G. Michael Jenkins Jr. checks out one of the then-new Ford Taurus police cruisers that will replace the Crown Victoria models, one of which is at right.