The 17-year cicadas are coming ... for Northern Virginia. Here's when Richmond will see them again.
0 Comments
Share this

This year’s buzzworthy brood of 17-year cicadas is not expected to emerge in our part of the commonwealth.

Moreover, the big, noisy, sap-sucking insects are essentially harmless to us humans.

Though their huge numbers can provoke reactions ranging from fear to fascination, they might ultimately have more reason to worry about us instead.

Metro Richmond still has its own garden-variety, green-black cicadas on the way once the weather heats up. But locally, this is just another off-year for the famous, periodical kind.

If you do chance upon any of the orange-winged, red-eyed ones near Richmond, researchers will definitely want to know about it.

To learn more and help demystify their unusual ways, I spoke with Timshel Purdum, the resident bug expert at the Science Museum of Virginia.

What do they want? What’s with all the noise? Basically, cicadas are getting together and making music for the same reasons we do.

They’re saying “Come look at me, baby!” Purdum explained. “If you think about it, a lot of our songs, too, are all about love and romance.” But all that loud singing comes from the males only.

“Swarm” may have some menacing connotations, but it’s an accurate term. Their huge population, bursting all at once after a long dormancy, ensures their survival.

“Anybody who came out too early or too late is going to get picked off and they’re not going to reproduce, which means that their genes won’t get transferred.”

And because they’re not toxic to hungry animals (or humans, for that matter), there will be plenty of potential predators.

“A lot of birds are just looking forward to this.”

Where will they be this year? What about other years? Periodical cicadas come out in pockets of the central, southeast or northeastern United States every year — and just about every year somewhere within Virginia, at least in isolated fashion. But the swarm of national news stories in 2021 probably has to do with the relatively wide geographic footprint and big (human) population centers involved in this upcoming emergence.

More than a dozen states from Georgia to Michigan to New York will have some kind of scattered cicada appearance, with especially big concentrations around Washington, D.C.; Maryland; Pennsylvania; Ohio; and Indiana.

Within Virginia, “Brood X” is primarily expected to come out between the Washington suburbs and Winchester, and in the far west around the Cumberland Gap. The maps can look a little bit different across sources due to the overlapping, splotchy footprints of the various broods.

A helpful guide from the Virginia Cooperative Extension also maps some 2021 emergence between Fredericksburg, Charlottesville and Staunton, and also in pockets around Roanoke, Wytheville and Galax.

What could possibly sound more furtive and ominous than “Brood X?”

Somewhat arbitrarily, scientists assigned Roman numerals to their annual patterns around the turn of the 20th century — so this just the 10th cohort. In 2020, for example, Brood IX (nine) buzzed much of Southwest Virginia between Bristol and Roanoke.

The biggest show for metro Richmond and the Piedmont region is Brood II (two), which last appeared in 2013 and is scheduled to come back in 2030 and 2047.

Could the Northern Virginia cicadas fly down here, though? No.

“They actually can’t fly much farther than a football field; that’s about it,” Purdum said.

What’s with the 17 years? It’s still not entirely clear, but it could very well be a survival-driven adaptation. And some broods found across the Southeast U.S. (and parts of Southside Virginia) operate on 13-year cycles instead.

“It’s very unlikely, but scientists have noticed that some of the broods have been coming out off-cycle,” Purdum said. “But when they switch cycles, they go off by a matter of four years.”

“Because 13 minus four is nine, there is the possibility that next year Richmond might have a few early.”

Understandably, it takes scientists a longer time to fully observe the trends because they may get only a few opportunities during a career.

“We’re not 100% sure why, it could absolutely be climate change,” Purdum said. “It’s certainly one of the strong hypotheses about why it’s happening: that they’re completing their life cycles faster and so they emerge earlier.”

Climate change could affect their behavior in a couple of ways: gradually earlier emergence dates during spring, and a northward push to their preferred range. As the Mid-Atlantic starts to feel more like the South, weather-wise, the insect behavior will try to keep up. Some broods documented decades ago have since gone extinct, likely due to development of their woodland habitat.

So an entomology major in college would have been a toddler when the eggs for this year’s brood were laid back in 2004. Human activity has driven a lot of changes in the landscape and atmosphere since then.

Looking at it another way, today’s insect-obsessed kids will be nearing adulthood when periodical cicadas return to central Virginia nine years from now.

Why now? How long? This is where weather factors in. The magic number seems to be an average ground temperature of 64 degrees.

“Depending on where the brood is and depending on when their ground reaches a consistent 64 degrees, they’ll start coming out,” Purdum said. “The bulk will be in May, then through June it will start to trickle off.”

So those members of Brood X in Tennessee or North Carolina are likely getting a head start on their fellow cicadas in Indiana or New Jersey.

The emerging cicadas will shed their final exoskeleton (leaving behind telltale husks), fly a bit, mate, then females complete the circle of life by laying eggs in tree branches. The visible, audible part of the show concludes after several weeks, once all the adult cicadas die.

The newly hatched larvae will then drop to the ground later in the summer, burrow, and feed off tree roots for another 17 years.

Does it hurt the trees? Cicadas won’t kill trees, but the females cut into small branches when they lay their eggs. That damage can be a concern for fruit growers with young trees.

But they do almost all of their eating as juveniles (called nymphs) while clinging to a tree root underground.

“They are sap-sucking insects. They don’t really eat after they emerge.”

So, yes, the rose bushes are safe.

Are they anything like locusts? No. Locusts (which are essentially migratory grasshoppers) and cicadas are about as closely related as we humans are to bats, according to Purdum.

Colonial Americans probably applied that name due to familiarity with stories of harmful locust swarms. But it’s taken a long time for the misnomer to wear off.

Even a search of the Richmond Times-Dispatch archive shows that cicada and locust were used interchangeably in stories until the late 20th century.

And because cicadas aren’t emerging to eat, they’re not going to ruin crops.

What do I do if I see one? Here in the Richmond area, you probably won’t see the red-eyed periodical cicada.

“If somebody found one in Richmond, that would be really important data,” Purdum said. “They’re trying to encourage people to use the cicada app [Cicada Safari] on their phones to take a picture and submit it because they’re really crowdsourcing the data for this.”

But there are many other species of cicada across the world and even in our backyard, just with shorter life spans and less news coverage.

The next time cicadas drown out your cookout or awkwardly bump into your backyard stroll, Purdum and other scientists hope you’ll have a better appreciation for their unique and amazing way of being.

“There’s life everywhere; you don’t have to go to the jungle.”

If Republicans are successful in the fall election, they could pass new laws restricting abortion in Virginia, something groups opposed to abo…

Life-threatening side effects from COVID-19 vaccines are extremely rare, but Bradford Taylor was concerned something bad could happen to him i… 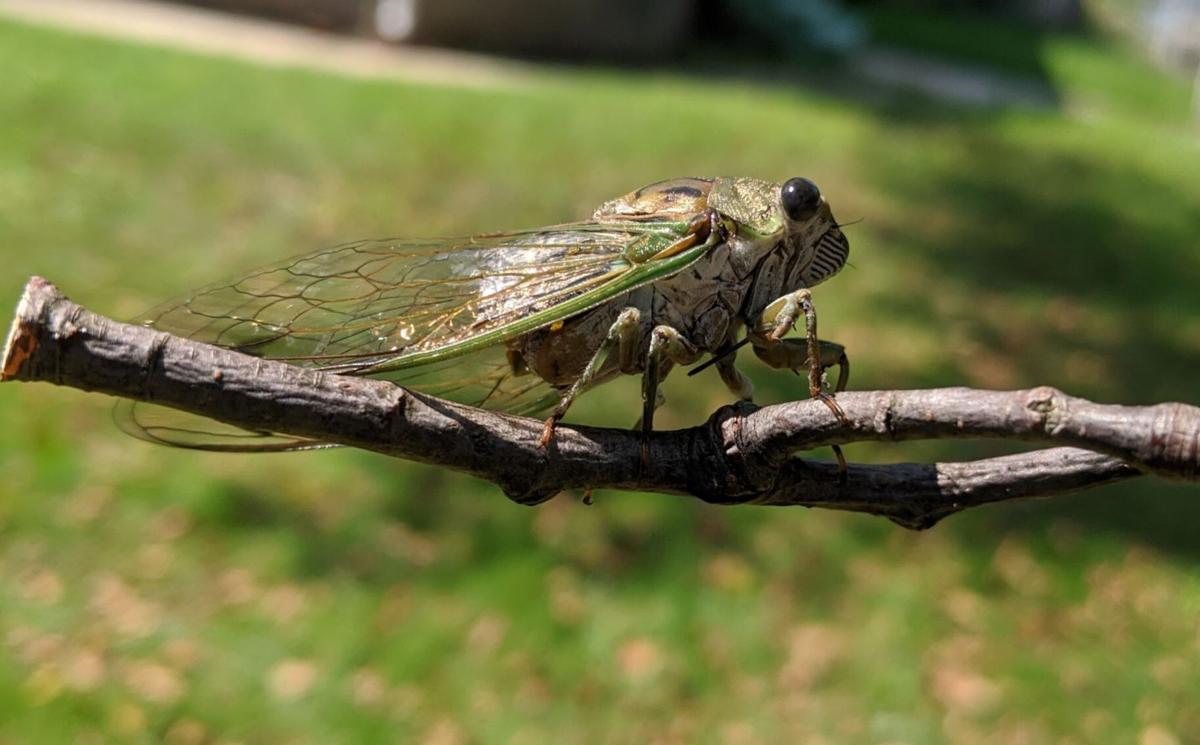 This bright green, annually appearing variety of cicada — looking quite different from the red-eyed periodical cicada — perched on a twig in Richmond in August. 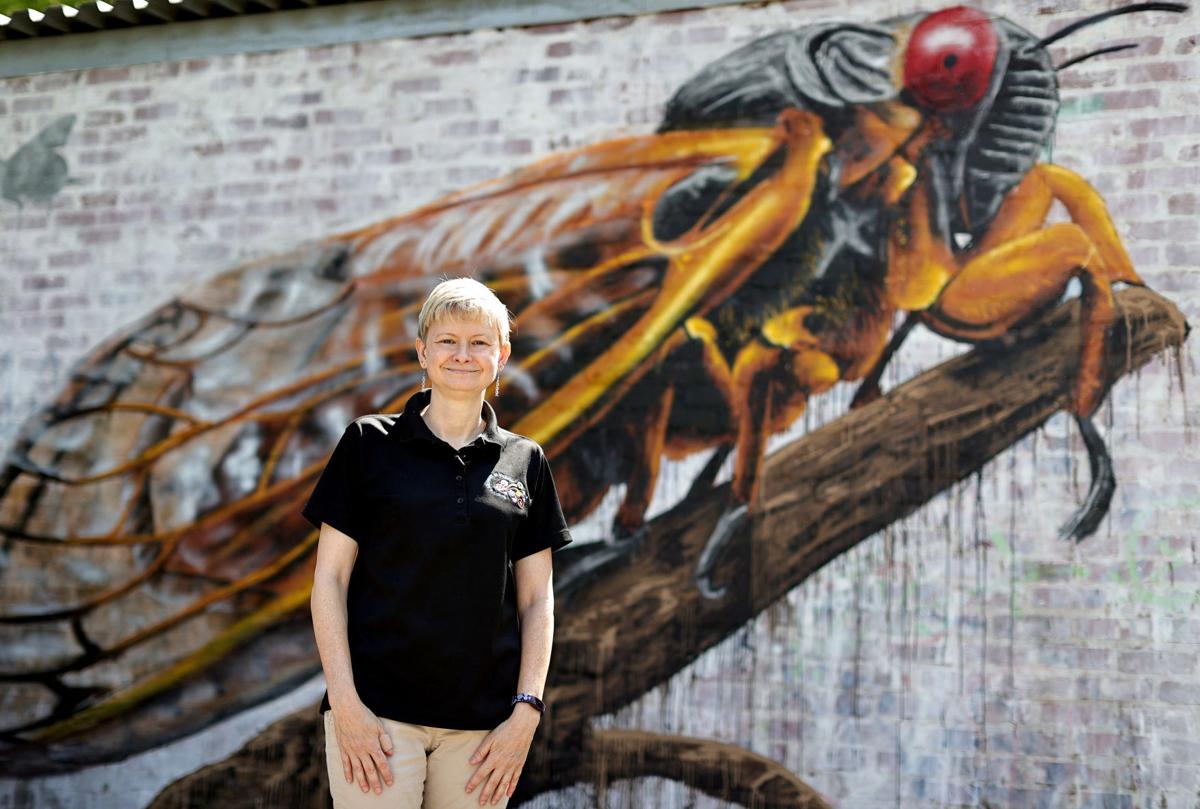 You probably won’t see the red-eyed periodical cicada in this area. If you do, “that would be really important data,” said Timshel Purdum of the Science Museum of Virginia, seen here in front of a cicada mural at another location in Richmond. 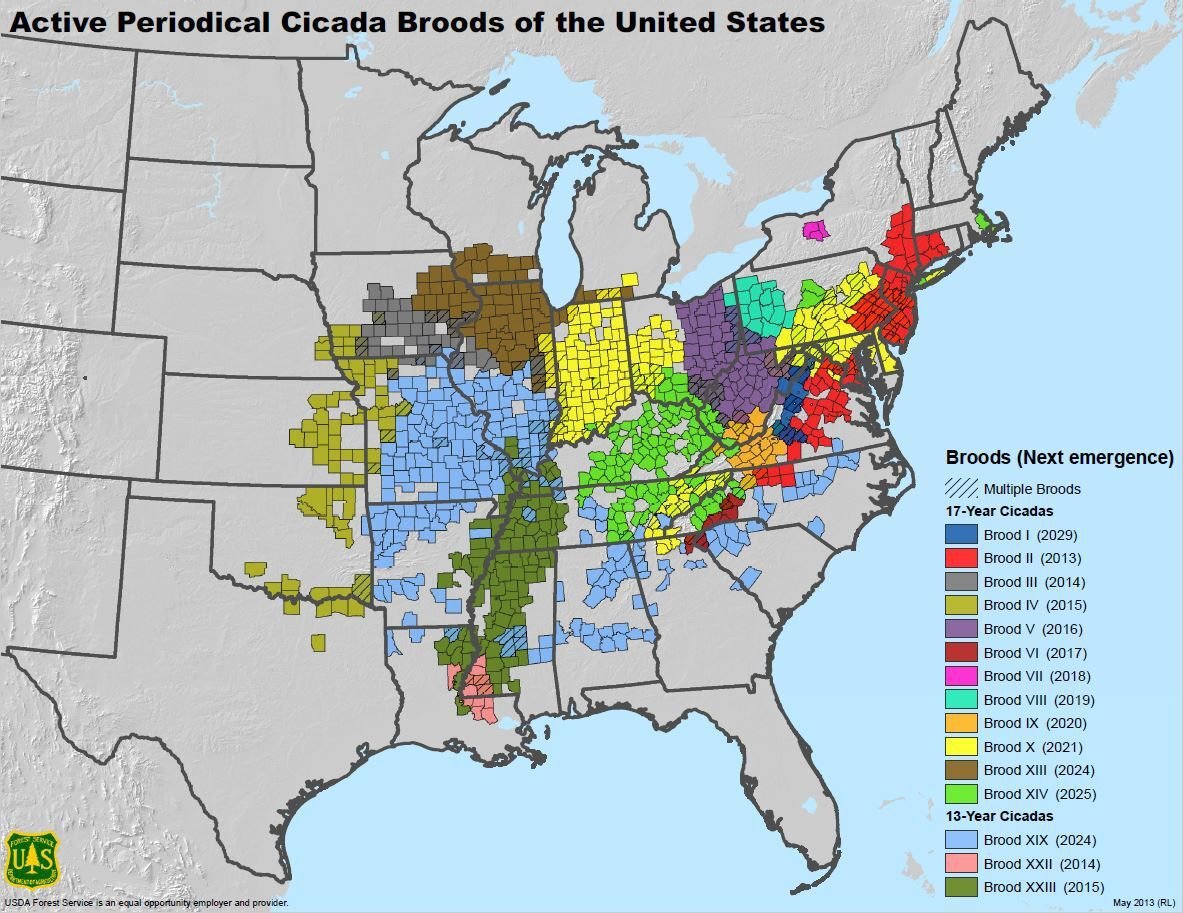 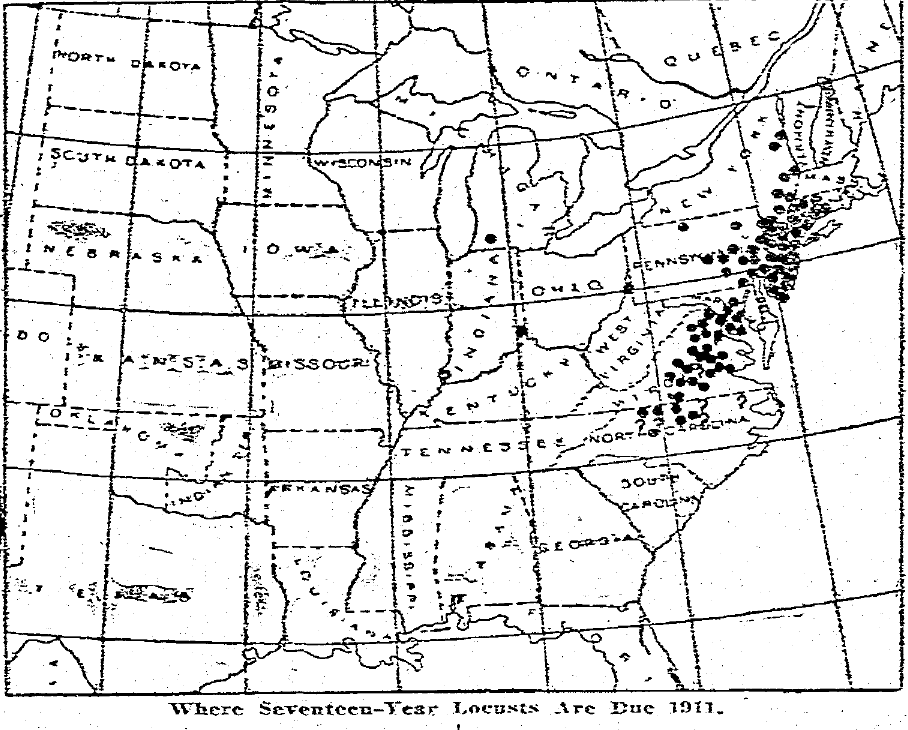 This map published in the Times-Dispatch in 1911 shows the expanse of that year’s cicada brood across central Virginia and up the Eastern Seaboard. The insects reappear locally every 17 years, most recently in 2013, and will do so again in 2030. 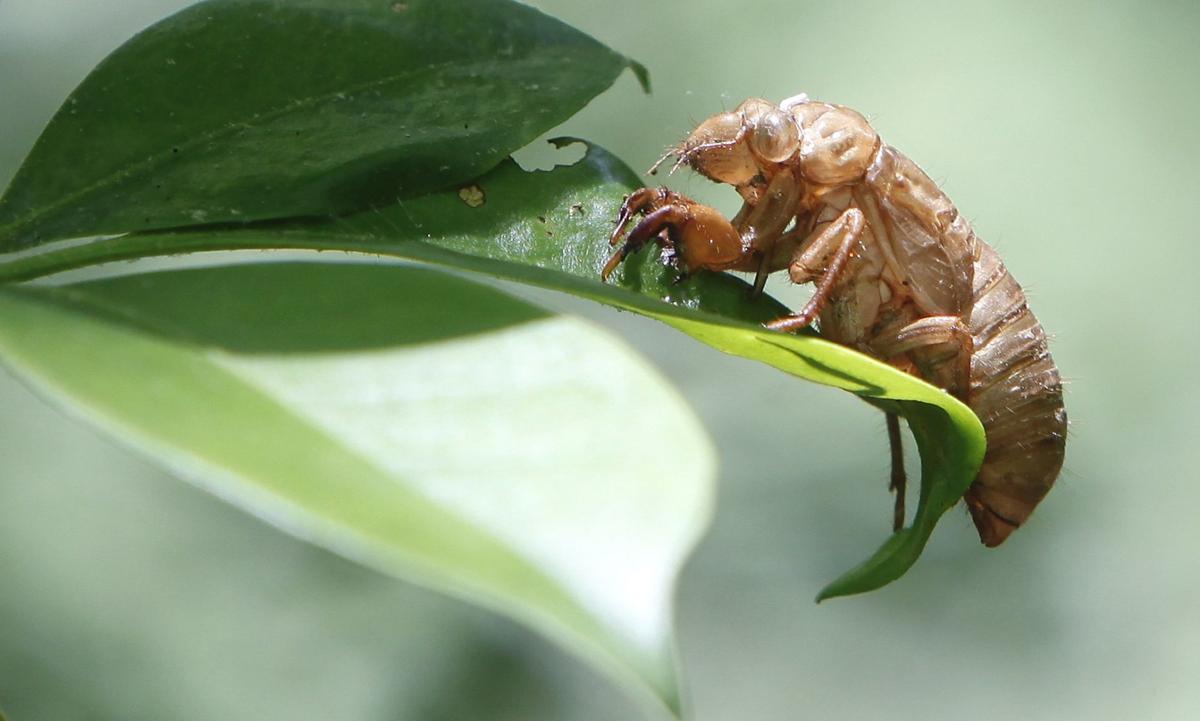 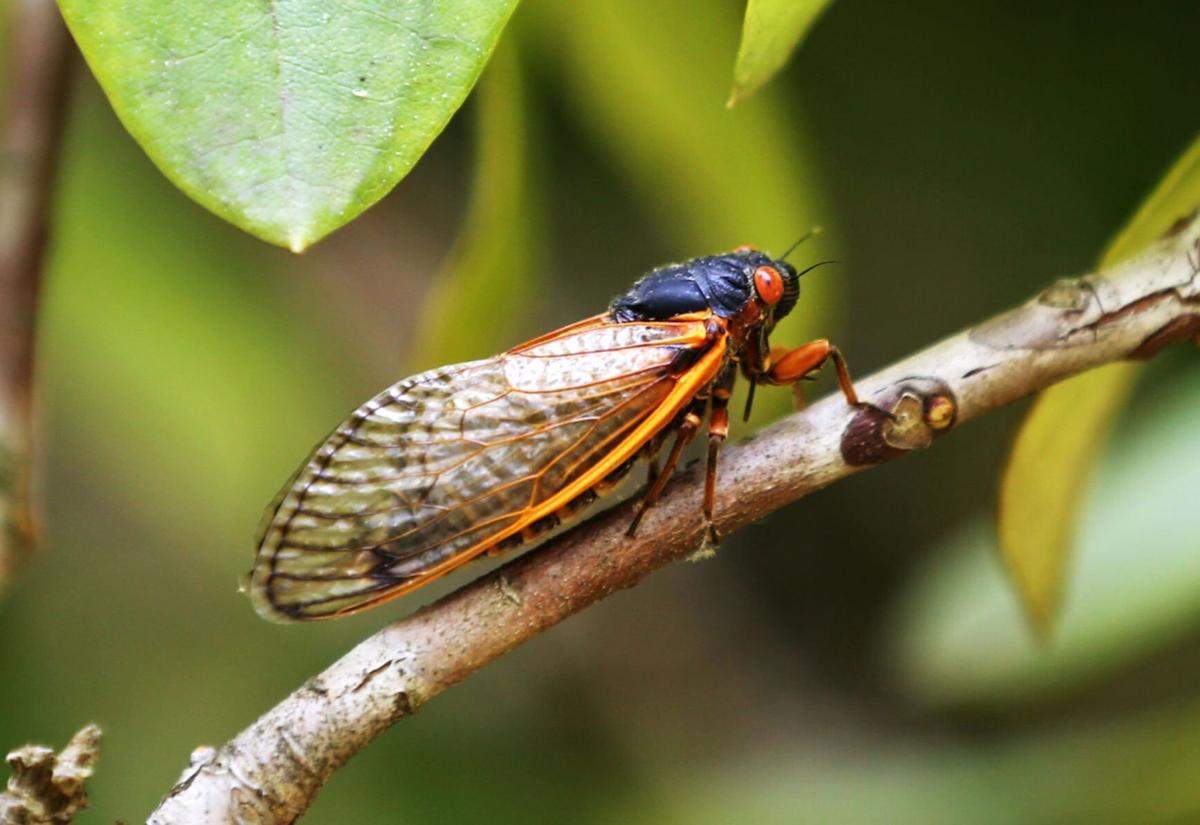 17-year cicadas are starting to appear in the Richmond area for the first time since 1996. This cicada is shown at residential area in Midlothian on Wednesday, May 29, 2013. 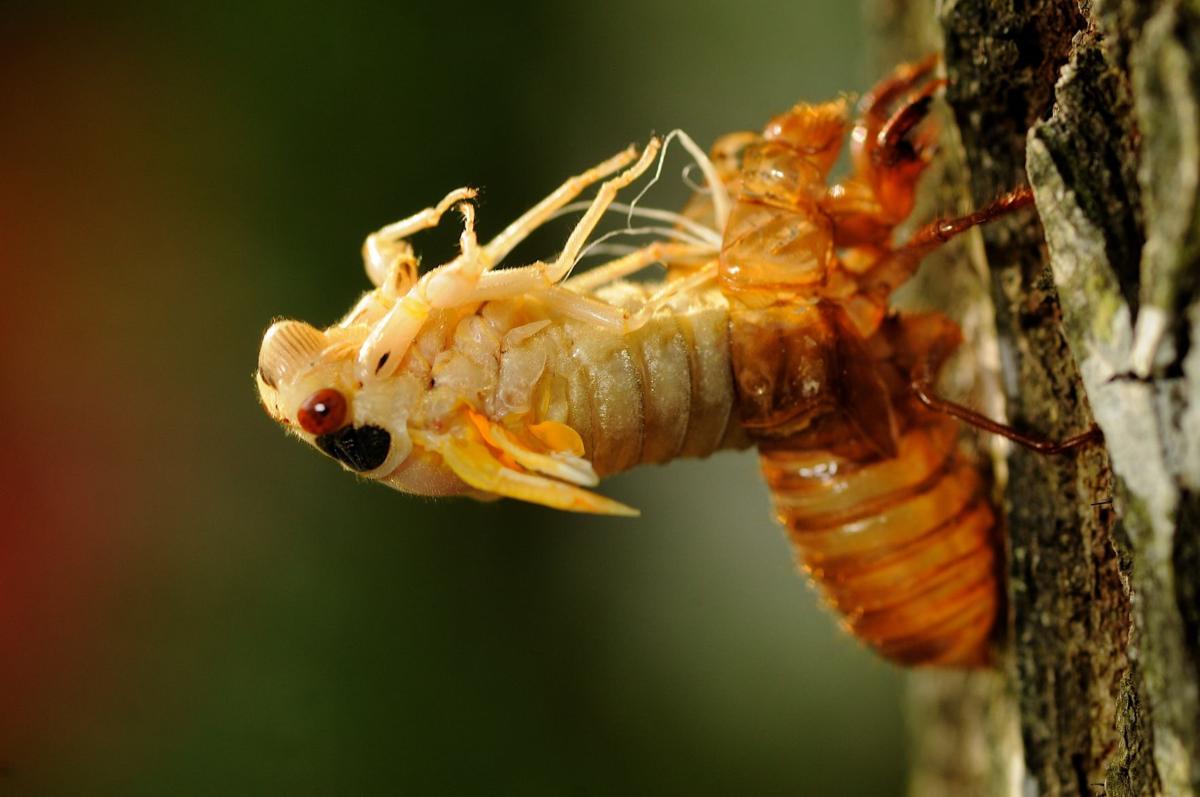