'The people we serve are paying too much for energy:' Virginia lawmakers are targeting Dominion Energy
0 Comments
Share this

This article was produced in partnership with the ProPublica Local Reporting Network.

In a bid to lower some of the highest electricity bills in the nation, Virginia lawmakers are pushing legislation that would strengthen oversight of the state’s largest utility, Dominion Energy, potentially setting up hundreds of millions of dollars in customer refunds.

The package of seven bills is designed to restore authority to Virginia’s State Corporation Commission, which regulates utilities and other business interests.

As the Richmond Times-Dispatch and ProPublica reported in October, years of Dominion-backed laws have left the agency hobbled as residential power bills have soared.

Notably, the utility backed legislation passed in 2015 to block rate reviews for seven years, and it later championed changes that allowed it to keep some profits that would otherwise be returned to customers and instead use the money for new projects.

Dominion argued it needed the money to modernize the electric grid and make record investments in renewable energy.

But a bipartisan group of lawmakers says the coronavirus pandemic, among other factors, is driving a concerted effort to revisit those changes as many people struggle amid a battered economy. Twenty-seven lawmakers are either sponsoring a bill or signed on as a co-patron to at least one of the proposals.

Del. Jay Jones, a Democrat from Norfolk, said the news organizations’ investigation last year “definitely elevated Dominion’s activities and how they use the legislative process to a level that folks had never seen before.”

According to the U.S. Energy Information Administration, Virginia households pay some of the most expensive electricity bills in the nation.

“The people we serve are paying too much for energy month after month,” said Del. Sally Hudson, D-Charlottesville, a labor economist and assistant professor at the University of Virginia who is sponsoring parts of the new legislation. “I knocked a door in my last campaign with a woman crying on her stoop because she was losing her housing. What she thought of as the thing that was really pushing her over the edge was her electric bill.”

Some Republicans are joining the legislative effort.

Del. Carrie Coyner of Chesterfield County said Dominion is a good job creator but that the regulatory system should be more consumer-friendly.

“The General Assembly needs to do more for ratepayers,” she said.

Under state law, utilities are entitled to earn about 10% profit on their assets. Anything over that is considered “over-earnings.” And according to the SCC, Dominion made more than $500 million in over-earnings between 2017 and 2019. Lawmakers want to return as much of that as possible to customers.

One of the new bills would facilitate that by eliminating a part of the law that allows Dominion to keep 30% of excess profits and instead require that money to be refunded to customers.

Another bill would further enhance regulators’ authority by ending a rule that limits how much officials can lower electricity rates if they determine the prices are too high.

And yet another bill would end a rule that allows Dominion to spend excess profit on new projects.

Dominion opposes the legislative package. Spokesman Rayhan Daudani said the utility’s customers pay rates that are below the national average and “receive service that is reliable and increasingly from cleaner sources.” He said Virginians’ overall bills run higher because they use more electricity than other states, like those in New England that rely on natural gas or oil for heat.

Critics, however, note that Dominion’s residential power bills have increased nearly 29% since 2007 and will continue to rise, largely due to charges for new construction projects, according to the SCC. Federal data shows Virginians paid the sixth-highest bills in the nation in 2019, the most recent year available — more than nearby states like Kentucky, North Carolina and West Virginia that use comparable amounts of electricity.

The proposals, which are expected to be heard in a House committee on Monday, represent the largest challenge to Dominion in years and come as the SCC prepares to undertake its first financial review of Dominion since 2015, when the utility supported legislation to temporarily suspend rate evaluations. Lawmakers say the bills would strengthen regulators’ hands as they examine Dominion’s books later this year.

“It would be almost derelict to not be able to support these measures,” said Jones, who is among the lawmakers pushing for reforms and who is also running for state attorney general.

Both chambers of the legislature are controlled by Democrats. While the legislation appears to have support in the House, it faces strong political headwinds in the state Senate, where Majority Leader Dick Saslaw and other lawmakers have been critical of past bills that aimed to curb Dominion.

Last year, a Senate committee killed a similar measure, sponsored by Jones, that aimed to restore regulatory power to the SCC. Dominion had argued that the proposal would have hurt its ability to invest in renewable energy projects.

In an interview last week, Saslaw declined to say much about the new House legislation, which is being backed by consumer and environmental groups, including Clean Virginia, an advocacy organization founded by wealthy hedge fund investor Michael Bills to counter Dominion’s clout in the legislature. “I’d have to see the bills,” Saslaw said.

He did, however, criticize Jones, suggesting the legislative package could face opposition in the upper chamber. “He’s essentially become the mouthpiece for Michael Bills. ... It’s unfortunate,” Saslaw said.

Jones shot back. “I’m a mouthpiece for the consumer,” he told the Richmond Times-Dispatch and ProPublica, “and I’m insulted Senator Saslaw thinks I can’t think for myself.”

Other senators have also been openly critical of the push to restore powers to the SCC that legislators had previously removed. On Wednesday, a Senate subcommittee unanimously recommended rejection of one of the bills, which would scrap the provision that allows Dominion to keep 30% of its excess profits.

Leading the charge was Sen. Tommy Norment, a Republican who called on his colleagues to pause what he referred to as “legislative assaults” that were “impacting the desirability and Wall Street’s perspective on Dominion.” He owns $50,000 to $250,000 in Dominion stock, according to his most recent economic interest statement.

In a statement, Norment said his actions were appropriate under Virginia law.

“I am permitted to vote on any issue that does not treat me differently than any other individuals in a similar class,” he said. “Here, the similar class would be all shareholders.”

Paul Seamus Ryan, vice president of policy and litigation at Common Cause, a government accountability organization, agreed but said Norment should recuse himself anyway.

“I think it’s really important for public officials to avoid even the appearance of a conflict of interest or corruption,” he said.

Sen. Jennifer McClellan, D-Richmond, who is sponsoring the Senate bill on Dominion over-earnings, said she would continue to advocate for the legislation as it awaits a full committee vote.

“I don’t think we should look at how rates compare to other states, but rather, what is the right balance” in Virginia, said McClellan, who is running for governor. “Who should get to benefit if they earn more than their set profit: customers or shareholders?”

Gov. Ralph Northam’s office did not respond to a request for comment, but he has also advocated for Dominion to return some over-earnings to customers. Last year, he asked the legislature to force Dominion to use about $320 million in over-earnings to cover unpaid residential utility debt. But lawmakers passed a scaled-down, $127 million relief plan.

The fight over Dominion and its influence has riven Virginia politics in recent years.

When Democrats took control of the legislature in 2019, many pledged to rein in the utility. Bills, the wealthy investor, fueled the effort by offering campaign money to any candidate who vowed not to take contributions from utilities like Dominion, and he supplanted the utility as the state’s top political donor.

But Dominion ramped up its spending, too, and in 2020, it was back on top of the donor list, contributing $1.3 million to Virginia candidates and campaign accounts, according to the nonpartisan Virginia Public Access Project, which tracks money in state politics.

The amount was significant, given that it wasn’t a regular election year for governor or either chamber of the legislature. (In 2018 — the last “off-year” election for state races — Dominion spent much less, about $369,563.)

The campaign finance system “allows for individuals to be elected very easily that support the interests of corporations above people,” said Del. Ibraheem Samirah, D-Fairfax, who was elected in 2019. “And it affects both parties, Democrats and Republicans alike.”

Samirah sponsored a bill that would stop public service corporations like Dominion from donating money to the state lawmakers who write the regulatory laws — a bill that has been introduced and then killed several times in recent years. Last week, two of his Democratic colleagues joined two Republicans to kill his bill in a subcommittee.

Clarification, Jan. 30, 2021: This article was updated to clarify what Dominion critics consider to be a better measure of energy costs for Virginia residents and to add further comment from a company spokesman. 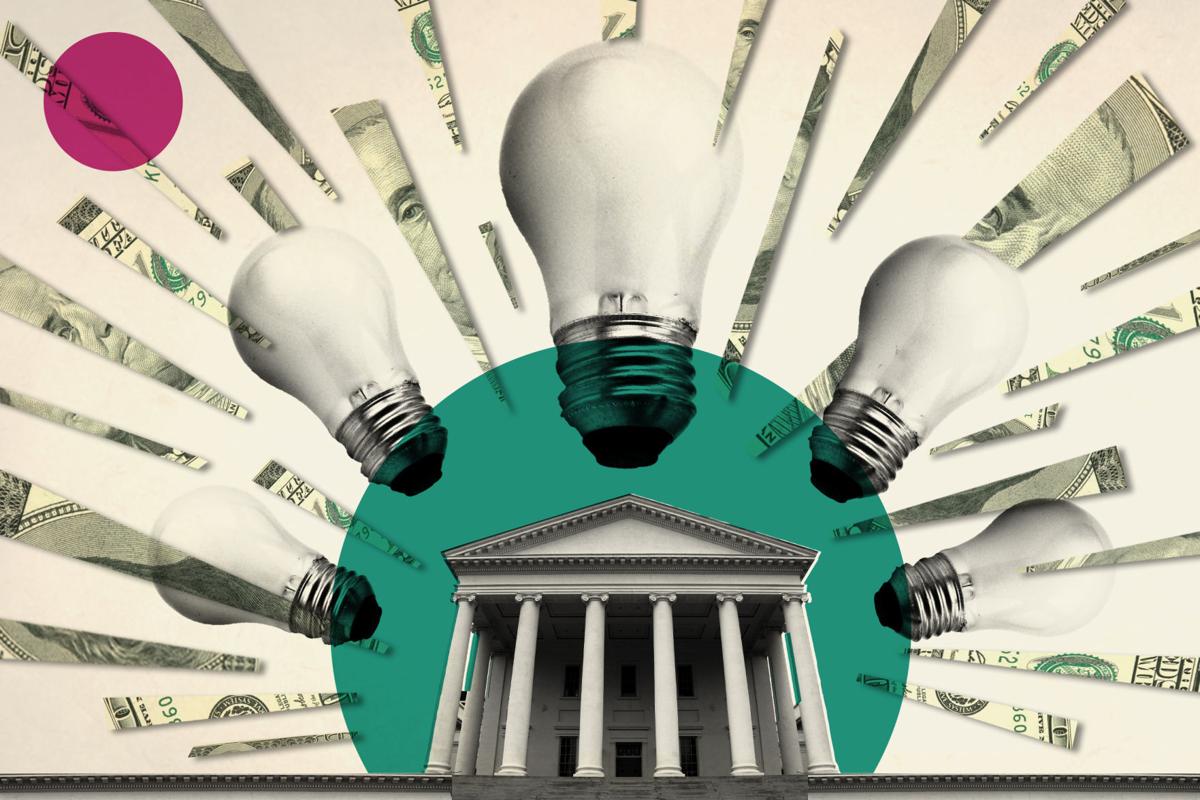 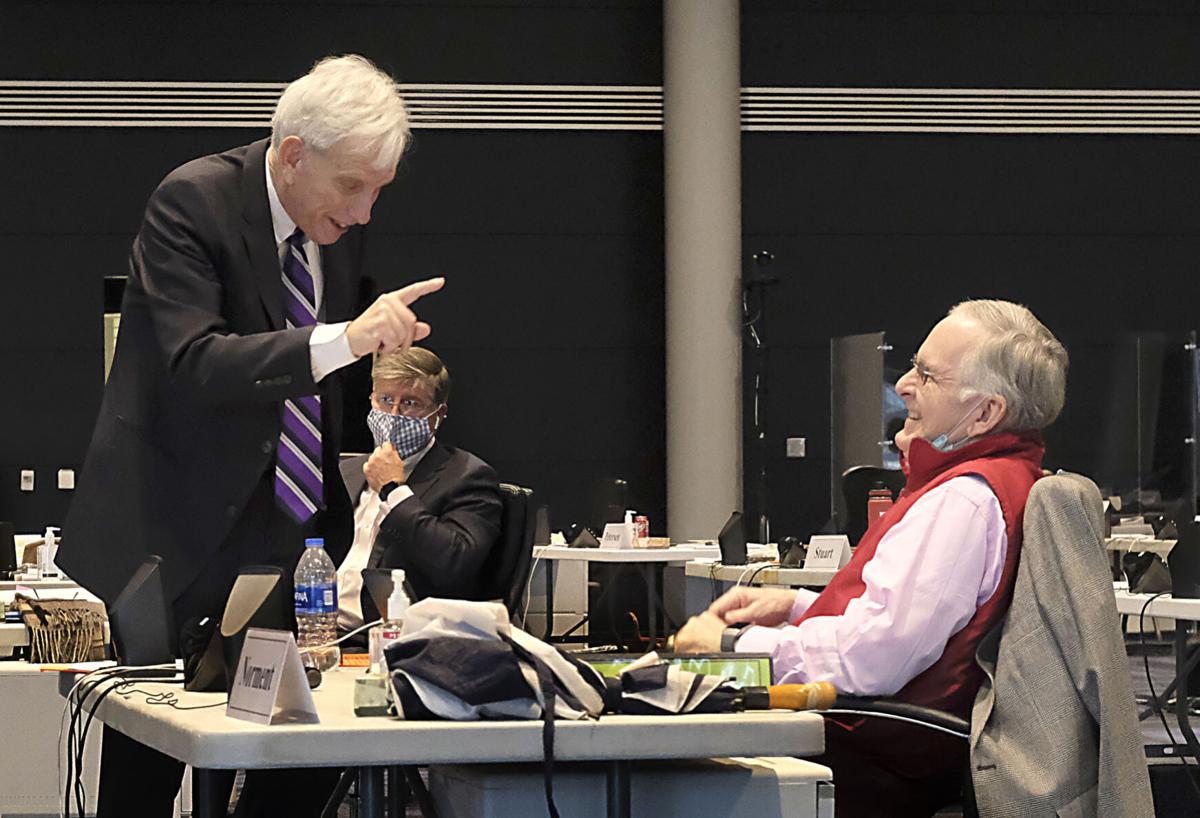 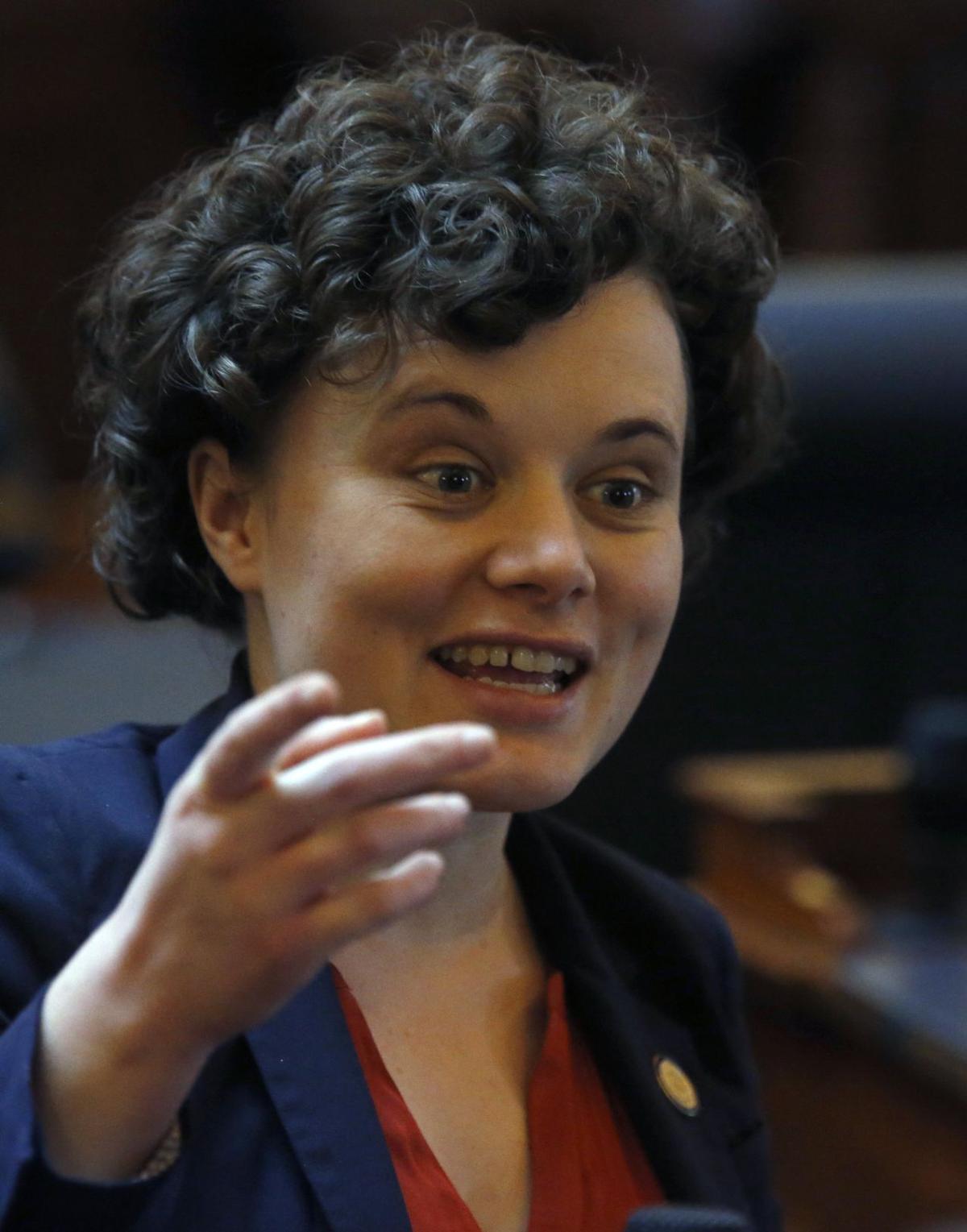 “The people we serve are paying too much for energy month after month.” 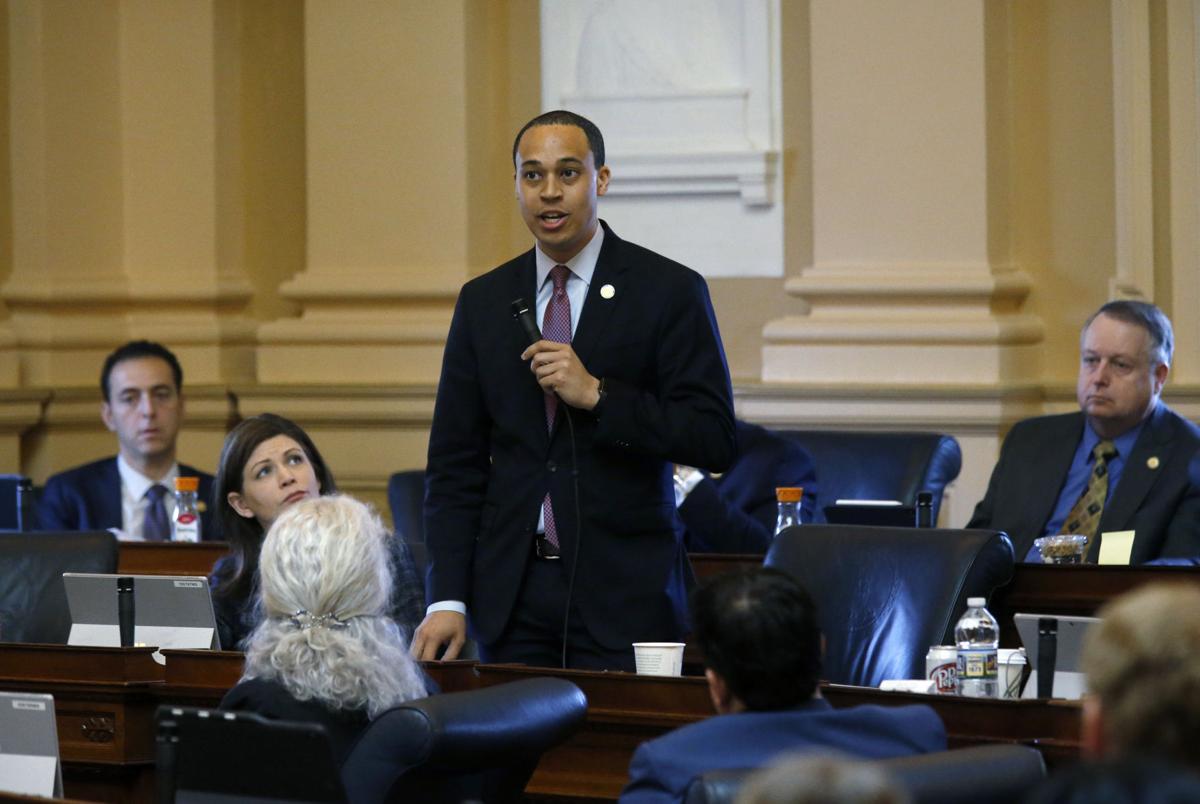