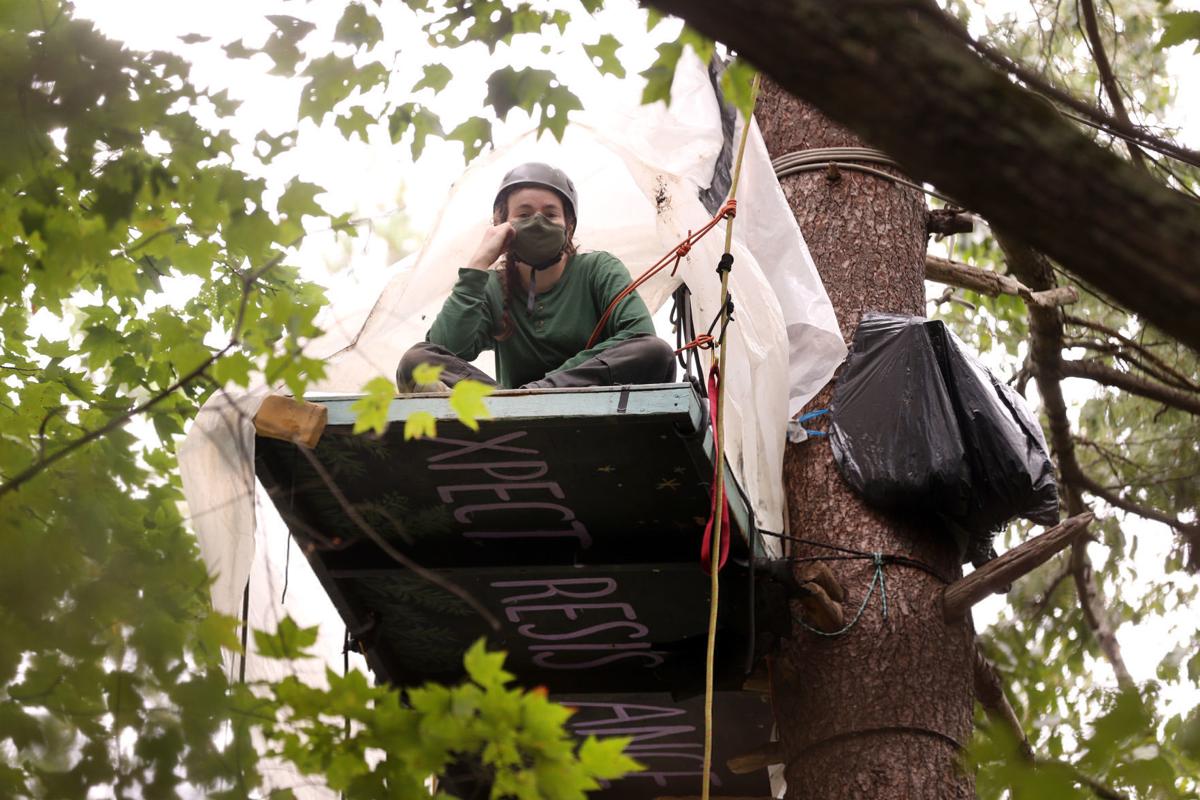 A pipeline foe looked down from one of three tree stands off Yellow Finch Lane in Montgomery County on Tuesday. The tree protest has been going on for over two years. 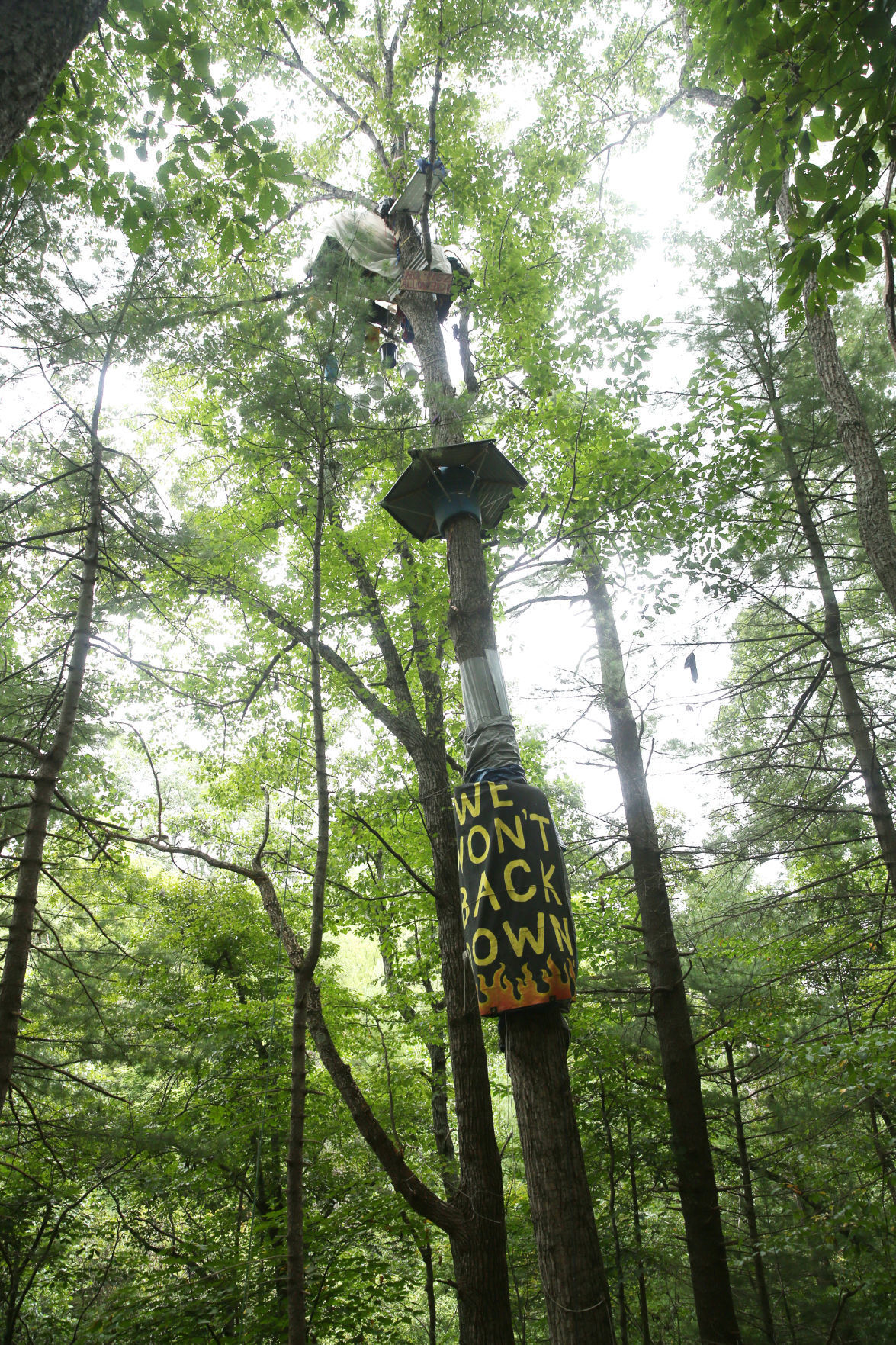 A third tree-sitting protest has been added to Yellow Finch Lane in Montgomery County, where pipeline protesters have been blocking work on the Mountain Valley Pipeline for more than two years.

The longest stand against the Mountain Valley Pipeline will likely last at least two months longer.

A judge on Tuesday delayed a hearing on the pipeline company’s motion for an injunction that would force protesters from their tree stands in Montgomery County, where they have blocked Mountain Valley from cutting some of the last remaining trees in the pipeline’s path.

Citing concerns about the growing spread of the coronavirus, Circuit Judge Robert Turk continued until Nov. 12 a hearing that was set for Thursday.

Since Sept. 5, 2018, pipeline opponents have positioned themselves about 50 feet off the ground, in a white pine and a chestnut oak. Supporters send up food and water while standing guard in a camp below the trees. A third tree stand went up in March.

A changing cast of characters — some masked and anonymous, others speaking openly — have taken to the trees off Yellow Finch Lane, not far from where the pipeline will burrow under the Roanoke River.

The tree-sitting protest is the longest continuing blockade of a natural gas pipeline on the East Coast, according to Appalachians Against Pipelines.

“Today is DAY 740 of the Yellow Finch tree sits,” the group said Sunday in a post to its Facebook page that sought donations.

Mountain Valley has said the protesters are illegally blocking a construction project that has been approved by regulatory agencies and is needed to supply natural gas to East Coast homes and businesses. But those arguments will now have to wait.

In recent weeks, organizations and individuals have voiced their objections to the company’s request for a two-year extension of a certificate granted by the Federal Energy Regulatory Commission, which approved construction of the 303-mile pipeline nearly three years ago.

Work has since been delayed by legal challenges from environmentalists, who say that burying a steel pipe that is 42 inches in diameter along steep slopes will scar the landscape; clog streams and rivers with mud; and destroy the natural homes of endangered species.

“People who live along the MVP route have had their land taken, their water polluted, their health and livelihoods harmed, and their lives upended for three long years — all under the sanction of FERC’s certificate,” said Jessica Sims, a field coordinator for Appalachian Voices, in a statement issued by the organization.

“The pipeline developer has shown no regard for them, and no remorse for its actions. MVP should not be allowed to continue for a single additional day, much less two years.”

Appalachian Voices and seven other environmental groups have submitted 43,000 comments and signatures against the two-year extension, they said in a news release Monday.

Others have packed FERC’s online docket in recent days with written statements, most in opposition.

But the Pipeliners Local 798, a union representing welders and other skilled workers, said that yet another work stoppage “would be devastating to local craftsmen who are depending on the thousands of jobs supported by MVP.”

The union included in its letter the names of nearly 2,000 people who support the “great economic growth” spurred by the $5.7 billion project.

FERC had said the deadline for comments was Sept. 11. In a letter last week, Virginia’s U.S. senators, Mark Warner and Tim Kaine, asked that people be given more time to submit their comments.

The federal agency is planning a response to the Democratic senators, a spokesperson said this week. In the meantime, she said, public input received after Sept. 11 will be considered.

Voting guide: How, where and when to cast your vote ahead of the November election

Voting in the November election formally kicks off Friday in Virginia, when polling places will open for in-person voting and absentee ballots…

A pipeline foe looked down from one of three tree stands off Yellow Finch Lane in Montgomery County on Tuesday. The tree protest has been going on for over two years.

A third tree-sitting protest has been added to Yellow Finch Lane in Montgomery County, where pipeline protesters have been blocking work on the Mountain Valley Pipeline for more than two years.